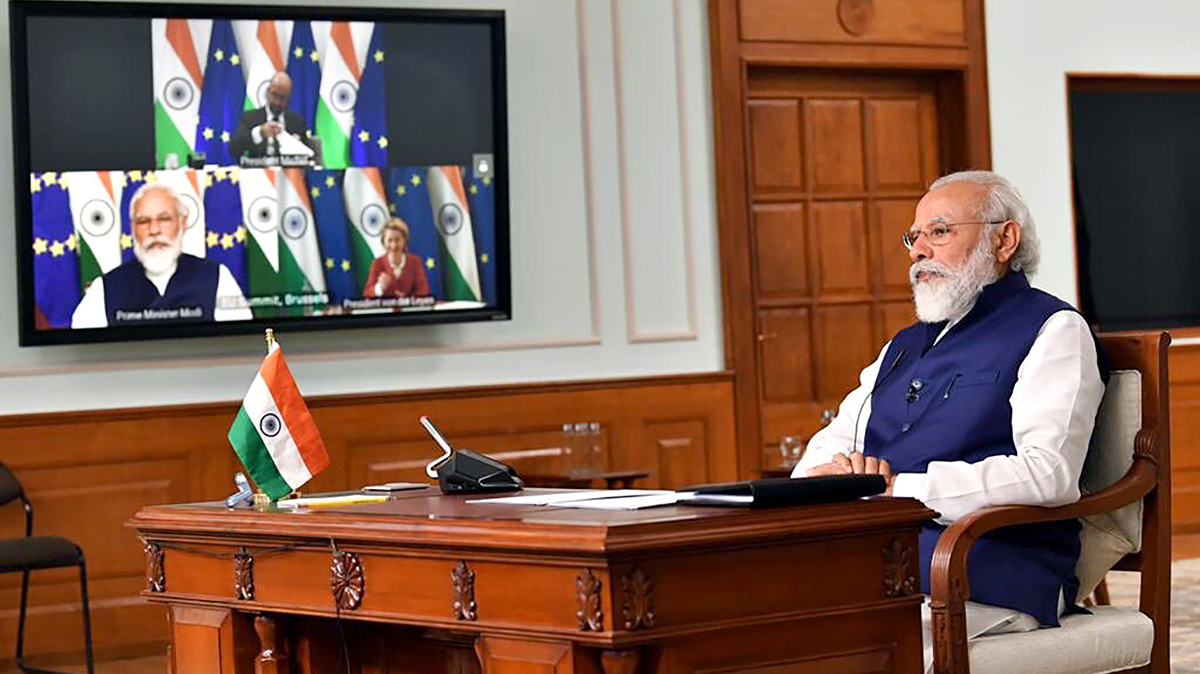 India-EU relations date to the early 1960s, with India being amongst the first countries to establish diplomatic relations with the European Economic Community. A cooperation agreement signed in 1994 took the bilateral relationship beyond trade and economic cooperation. Currently, India’s relationship with the EU is underutilized and has not reached its full potential as compared to the US. With an assertive China and uncertainty of US policy under the Trump administration, Europe and India have realised they have much to offer each other. EU is at a stage where it wants to be more than a trading bloc, it sees greater participation for itself in global affairs, and is seeking out the right countries like India to partner with. The lack of global leadership during the pandemic, with Russia, China and the US not rising to the occasion, created a vacuum that India might like to fill. The EU as a bloc of 28 countries is India’s one of the largest (3rd) regional trading partner while India was the EU’s 9th largest trading partner in 2018-19. India’s overall bilateral trade with the European Union for the period 2018-19 was 115.64 USD billion. The EU continued to be one of the largest sources of Foreign Direct Investment (FDI) for India with FDI valued at USD 609.84 billion from Apr 2000-March 2017.

The 15th Summit between India and the European Union (EU) was held in a virtual format on 15th July 2020. The Summit laid foundations for a deeper and more strategic cooperation between the European Union and India in times to come. Though there was no sign of an FTA between the EU and India in the immediate future and no condemnation of China, there still were a lot of things to cheer about. Both the EU and India have agreed to deepen cooperation in areas like climate change, maritime security, digital economy, connectivity, research and innovation, water and climate action, and civil nuclear cooperation.

According to Prime Minister, Shri Narendra Modi, ‘Atmanirbhar Bharat’ would be open to the world economies and it will integrate domestic production in India to global supply chains. According to the Indian Ambassador to EU, H.E. Mr. Santosh Jha, “India-EU Summit has provided a significant boost and a stronger direction to the strategic partnership between the two regions. The outcomes highlight the multi-dimensional nature of their relationship and underline that these relations are not just consequential to the destiny of the respective citizens but also a pivotal factor in shaping the global future as well.”

EU is India’s largest trading partner and the EU is one of the largest investors in India with a cumulative investment of around USD 86 billion, in 2018. But this is dwarfed by the USD 220 billion EU companies invested in China in the same period. Further, India represented only 2% of the EU’s external trade, much below China (13.8%), indicating a tremendous untapped potential for the future of India-EU trade and investment. This is about to change in the post Covid world in which there will be a significant realignment of strategic and trade relations, a trend which is already underway. As investors of the EU search for places to invest and European businesses look for sourcing products away from China, India appears to be a suitable spot.

Amongst India’s exports to the EU, the top goods and services include gems and jewellery, apparel and textile, machinery, organic chemicals, iron and steel, automobiles, mineral fuels and pharmaceuticals. On the other hand, major imports from EU include machinery and equipment, gems and jewellery, auto, plastics and organic chemicals. It is evident that a FTA (officially referred to as the Bilateral Trade and Investment Agreement – BTIA) would accelerate the GDP growth for the EU and India. Yet, this BTIA has undergone several rounds of talks with the latest being in July 2020.

As the global supply chain transitions from its over-dependence on China, India emerges as the most natural ally for the EU in this regard. Furthermore, Europe’s dependence on China for life-saving drugs has been starkly evident during these pandemic times. A mélange of India’s vast manufacturing capacities coupled with European expertise in research and development would profit both the regions. Correspondingly, a similar strategic alliance in the information and communications technology front could range from building strategic autonomy in the digital sphere to investments in emerging and disruptive technologies.

Family-owned Indian firms are doing well in Europe given the given shared democratic values, commonality of philosophy and the complementary nature of offerings. However, the European M&A landscape throws many challenges for Indian firms in terms of New investment barrier introduced at the EU level, the Non-existence of the EU trade treaty and heterogeneous market, acquisition financing & lack of information networks. From Europe’s perspective addressing these challenges may require structural and political changes.

This is a problem that European companies face in India. India is a sub-continent and like the EU, it is not a fully integrated market. It is not the same to do business in the state of Maharashtra or in the state of Rajasthan. Taxation, for instance, is not harmonized across India and this has been one of the major problems impacting foreign but also Indian companies. The approval of the GST- Goods and Services Tax is a major step in a good direction.

On a positive note, due to the financial market development in India, it is less prone to any financial crisis as against China and this makes India a better investment destination than her neighbour.

The recent endorsement of “EU-India Strategic Partnership: A Roadmap to 2025” talks about a common roadmap to guide joint action and further strengthen the EU-India Strategic Partnership over the next five years. The agenda discussed in the roadmap talks about non-proliferation and disarmament, maritime security, counter-terrorism (including counter-radicalization, anti-money-laundering and countering terrorism financing) and cybersecurity. EU-India Human Rights Dialogue is also a key tool to promote shared values of human rights and fundamental freedoms and convene regular meetings to forge mutual understanding and discuss human rights issues – including women’s rights and empowerment and child rights.

A regulatory dialogue is being initiated via the already established EU-India Joint Working Group on pharmaceuticals, biotechnology and medical devices. A need for a dialogue on customs through the Joint Customs Cooperation Committee is critical.

Also, India and the EU share a mutual interest in reciprocal mobility of talent. The EU-India cooperation should also foster innovation by promoting networking between EU and Indian innovators, start-ups, incubators, and accelerators by setting up joint platforms, both offline and virtual, and engaging in coaching, training and staff exchanges. Highly qualified workers could be integrated into Indian and EU-led innovation system industries and help maintain technology-based leadership and the sharing of best practices, internationalization of SMEs, and contributing to the global value chain.

The future of India-EU relations looks very bright since the potential has not been tapped. According to H. E. Mr Freddy Svane, Ambassador of the Royal Danish Embassy in India, “Indo-EU relations will be the vehicle for the New World Order in which the SDGs and the climate changes can be seriously handled. The shared visions and values based on democratic principles, rule of law and multilateralism will set the standards. The #NewIndia mission will be guiding us.”

Rajesh Mehta
Author is a Leading International Consultant & Policy Professional. His twitter address is @entryindia and Linkedin address is https://www.linkedin.com/in/rajeshmehtaentryindia/.