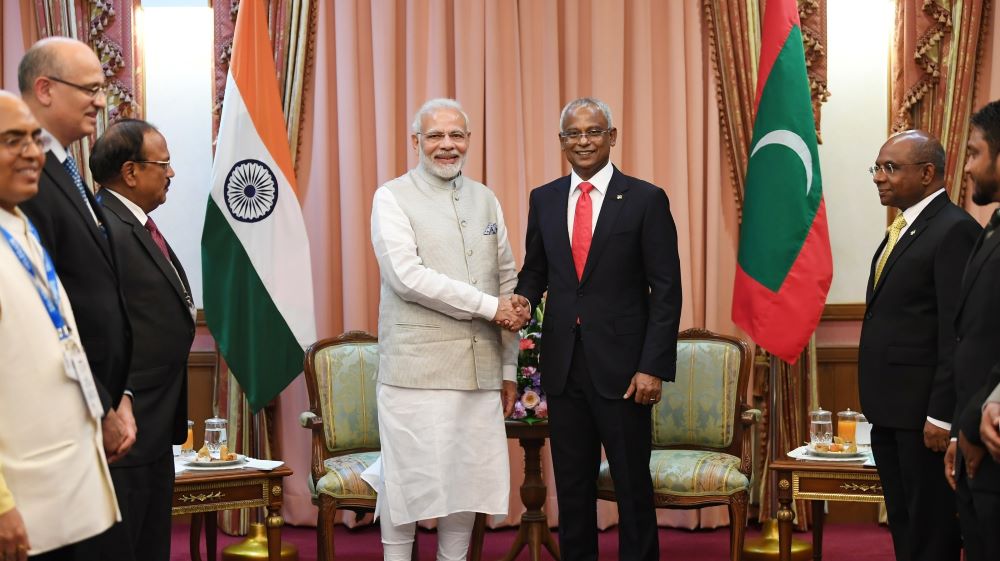 India- Maldives relations have reached a new high with the announcement of India’s aid to a multi-island connectivity project in Male, Maldives. The Greater Malé Connectivity Project (GMCP) spanning 6.7km, along with new budgetary support and an air travel bubble will not only expand India’s presence in the region but will also overshadow the 1.39km Maldives- china Friendship Bridge in the Indian Ocean Archipelago. Even though small infrastructure projects between Maldives and Beijing are still active, the new bilateral agreement on GMCP with India gives a clear indication that India and the Indian Ocean security has always been the Island nation’s priority. Post-Galwan Valley crisis, this recent development seems to be a befitting reply to China’s aggressive expansionist policies in the Southern neighbourhood.

India and Maldives shared friendly relations since the time of Maldives’s independence in the year 1965. India was one of the first countries to recognize the Maldives and since then the relations between the two have only expanded in multiple sectors. India’s prompt assistance at the time of coup attempt in the Maldives in 1988, its support during Maldives Tsunami in 2004 and ‘Operation Neer’ under which tonnes of freshwater was airlifted to the Maldives are a few instances from the past that show how strong the ties between the two nations have been.

From 2013 onwards the relations between India and Maldives had started to deteriorate. One major reason behind the same was China’s increasing foothold in the region during the term of the then-president Abdulla Yameen. During this time, China and Maldives engaged in the Maldives-China Friendship project under China’s Belt and Road initiative (BRI). It is a 1.39-kilometre bridge linking the capital city Malé to Hulhule Island. Yameen had described this $200 million project as the biggest diplomatic achievement in Maldives’s history. A Free Trade Agreement (FTA) between the two was also signed in December 2017. Both FTA and BRI gave a major boost to Maldives-China ties.

In the year 2018, Ibrahim Solih from Maldivian Democratic Party defeated Yameen and made a historic visit to India just after assuming office. The stage was then set to see an end to years of Pro-China tilt in this southern island nation of Maldives. Since then, India has been able to grab multimillion deals like the $300 million Gulhifalhu port project while China- Maldives relations suffered. Solih reaffirmed its “India First Policy” and further strengthened its defence and trade relations with India. Recently, under ‘Operation Sanjeevani’, India also assisted the Maldives with 6.2 tonnes of essential medicines in the fight against COVID 19. However, a breakthrough in the relations between the two came with the announcement of Indian assistance of USD250 million as budget support and USD500 million for the GMCP. Within this project, Male and the islands of Villingili, Gulhifalhu, and Thilafushi, will be linked by a bridge-and-causeway link. Further, a cargo ferry service and an air travel bubble between the two countries will add to the expanding trade ties.

Why India’s approach is better than China’s?

Today, there is a pro-India tilt in the Indian Archipelago and this is because of the differences in terms of approaches both India and China are adopting to strengthen their foothold in the region. Maldives owes China a whopping $700 million which it has to repay by 2022. This is just one example of how China’s debt-trap policy works. On the other hand, India adopts only those policies that lead to mutual benefits between nations and the 1981 bilateral trade Agreement with the Maldives is an example of the same. Within this agreement, India sought to provide Maldives essential commodities like potatoes, onions, rice, wheat, flour etc. And the recent round of talks in August 2020 has led to a renewal of the same supply of commodities thus ensuring food security in the Maldives. Apart from this, Capacity Building and training is another important component of India-Maldives relations which has further led to not just economic but all-round development of this island nation. Thus India has adopted only mutually beneficial policies setting a positive image worldwide and China, on the other hand, seems to be following a more selfish path which aims to bring profit only for China.

China’s shift towards an aggressive foreign policy in its neighbourhood has worked in favour of India who has been trying to leverage its friendlier disposition to expand its presence in the strategically important Indian Ocean Region. While disputes over the South China sea, the recent Galwan Valley crisis and the ongoing pandemic which is also called Wuhan Virus has affected China’s stature abroad, India’s soft approach and Strong neighbourhood policy have added to its positive image.

The world order today has been such that more and more nations are acquiring nuclear capabilities and in such a situation, it is highly impossible for anyone country to become a global hegemon. Therefore gaining a foothold in regional politics seems to be a more viable option to maximize power. Thus at a time when both the US and China have been engaged in an open cold war, India, with its expanding ties in the Southern neighbourhood is slowing moving towards becoming a regional hegemon. A war with the world’s second-largest army does not seem to be a practical solution. Therefore, the need of the hour is to increase one’s support base and the recent line of credit to the Maldives is an effort in this direction. Expanding India Maldives ties has therefore led to a shift in the balance of power away from China and towards India thus restricting China in the Southern Neighbourhood.