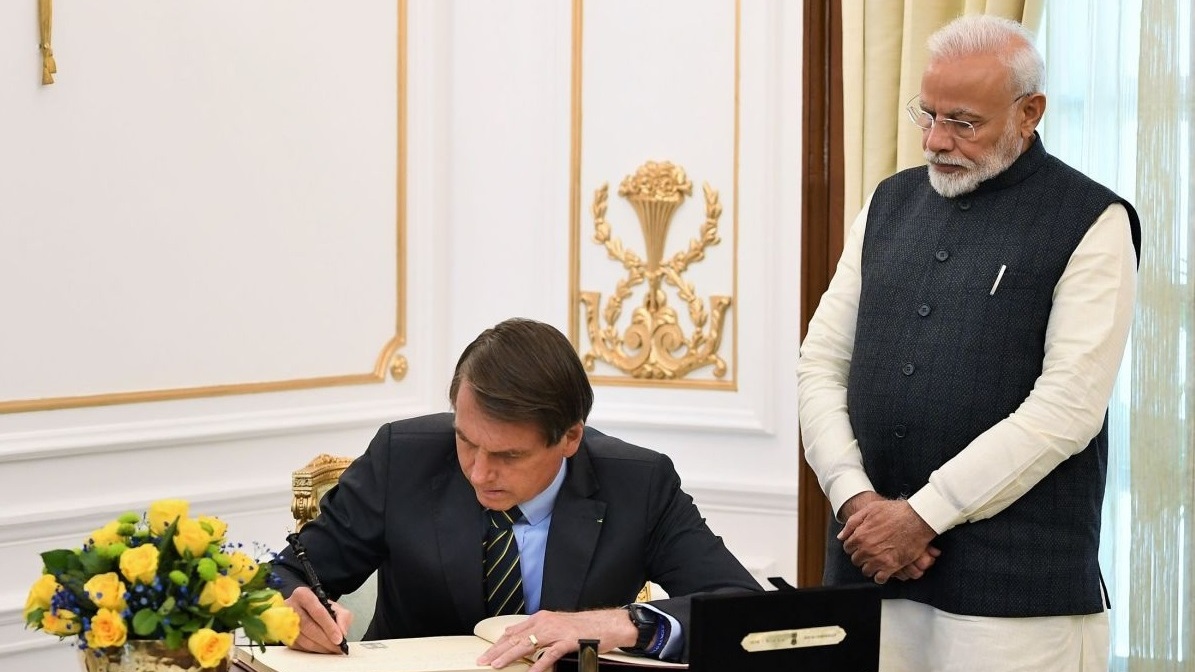 The President of Brazil, Jair Bolsonaro, was the honourable chief guest at the Republic Day celebrations of India of 2020. This was followed by a state visit by the Brazilian leader and its ministers to India and cemented the personal friendship between Bolsonaro and Modi. This friendship was even referred to by Mr. Modi when Brazil’s fortunes were significantly affected by the Covid-19 pandemic. It is safe to say, therefore, that India-Brazil diplomatic relations seem to have come into their own.

Since the turn of the century, Brazil has been India’s closest partner in a region where its presence remains limited, though the potential of the relationship has often been emphasized in several studies, especially with India’s emergence as a powerful economic market on the global scene.  Girded firmly by the traditional base of south-south cooperation, both affected a powerful opposition to the international world order and presented themselves as representatives of the global South. Together, they forged a ‘multilateral nexus’ (Santoro, 2019) and actively partnered in several multilateral and plurilateral fora like the G20 (Group of Twenty), the G4 (Group of Four) which was a platform that demanded reform in the United Nations Security Council, coordinated responses during the Doha round in matters of agriculture and became synonymous with the reinvocation of new South-South diplomacy. Under the ebullient leadership of Lula da Silva, who came to power in 2003 in Brazil and identified India as a priority state in his inauguration speech itself, both countries forged new organisational partnerships such as the India-Brazil-South Africa (IBSA) forum in 2003, the Brazil-Russia-India-China (BRIC) grouping which grew to include South Africa in 2010, becoming BRICS as well as the Brazil-South Africa-India-China (BASIC) bloc to coordinate responses to climate change. This multilateral cooperation was accompanied by the formation of India’s first strategic partnership in the LAC region when the India-Brazil strategic partnership came to be in 2006, where both countries identified themselves as “two large democracies that share a multicultural and pluralistic ethos and common developmental aspirations” (MEA 2006). This document identified a format of tripartite engagement, namely cooperation at the bilateral, regional and international levels. The scope of the document is vast and includes almost all possible avenues of cooperation. It has seen been reaffirmed in the 2016 visit by President Temer to India for the eighth BRICS summit.

The strategic partnership between the two countries came to be in an environment of unprecedented proximity that had been favoured by a mix of domestic and international developments (Hirst 2008). Propelled by booming IT and pharmaceutical trade between the two countries, the sustained growth in Indian GDP that compelled Latin America to take notice, cooperation at multilateral fora, rendered the possibilities of partnership extremely amicable to both sides. Further, under the leadership of the Lula government and increased policy priority granted to India in Brazilian foreign policy, a Preferential Trade Agreement was signed between India and the MERCOSUR countries in 2004. These increases in visits and trade reflected the changing mindset about the possibilities of the relationship in the mindsets of the political and business elite of both countries.

Since his ascendancy to power for the second time in 2019, Modi has met Bolsonaro on three separate occasions. During the most recent visit of Bolsonaro to India, an action plan was signed with Prime Minister Modi in order to revitalise the strategic partnership. For Brazil, apart from the ‘multilateral nexus’ along which its relationship with India operates, the partnership allows for the possibility of carving out for itself an important bargaining position in negotiations with its largest trading partner, China. It also hopes that access to India might allow for increased access to emerging markets in South and Southeast Asia as well as bolstering international solidarity in an international scenario where it has largely abandoned its regional policies within Latin America (Santoro, 2019).    In the fifteen agreements signed between the two states in January 2020, defence cooperation has again been specified as an important area for cooperation, with private Indian players like the Jindal Defence and Tauras Armas of Brazil signing a joint venture for the manufacture of small arms. In the same vein, several agreements have been signed to bolster trade and commerce between India and Brazil, with a commitment to double trade figures to USD 15 billion by 2022, which showed recovery from 2016 before the pandemic, though continues to be very low. Energy cooperation remains another important item on the agenda.

The partnership, therefore, is a complex, multilayered and dynamic phenomenon. It is guided by their individual pursuit for greater autonomy in their foreign policy decision-making as well as transforming the international agenda to include their interests. It is also emboldened by their shared economic pursuits, with Brazil finding in India a source for pharmaceutical and technological skill exchange and Brazil representing the answer to India’s quest to become energy and food security. The political intent of the partnership is coherent in the way both countries continue to cooperate, the relationship nevertheless, continues to be defined more by its promise than by active economic cooperation. The increase in diplomatic visits are an encouraging sign for the future of the relationship, however, it may unfurl post-pandemic. Brazil remains India’s major ally in the LAC region and a fellow champion of the role India hopes to occupy at the international stage.

1 reply on “India-Brazil Relationship in the 21st Century: Assessing Significance”