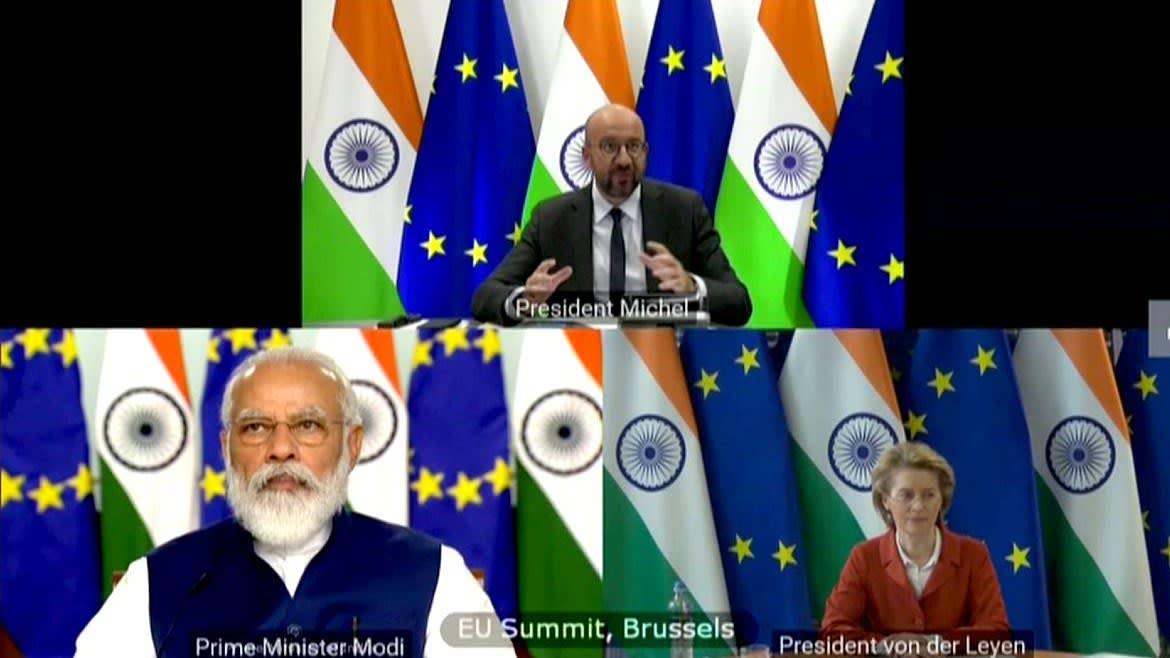 An Overview of the Summit

They agreed on building strategic partnerships by enhancing international security, preparedness and response to global emergencies in healthcare, global economic stability and inclusive growth, and implementation of the Sustainable Development Goals (SDGs). Their main focus, attending to the dire demands of the pandemic, was on health security and pandemic crisis preparedness. They decided on revving up the healthcare sector and the supplies.

To succour economic recovery post-COVID-19, the trio assented to the requirement to develop trade and investment relations. However, they were adamant about committing to balanced, ambitious and mutually-beneficial trade and investment agreements. Open markets and levelled playing field were considered as the salient stimuli for the same. To galvanise regular discussions on bilateral and multilateral issues, they acknowledged the necessity for High-Level Dialogues. It was also finalised in the meeting to establish a rule-based global trading system which would be in-line with the WTO norms and the assistance for valuable countries would be forged by the G20 Action Plan.

Both the parties trumpeted their continuous cooperation towards the implementation of the Paris Agreement and exerted their determination towards the Clean Energy and Climate Partnership. The Summit was not devoid of strategic talks; the two sides asserted their commitment to naval cooperation thereby amplifying their collaboration in ensuring safety and stability in the Indian Ocean. In addition, they deliberated on elevating global cyber resilience.

Consequently, the EU-India Strategic Partnership: Roadmap to 2025 was adopted to guide India-EU future cooperation. The Euratom-India Agreement was signed to intensify research and development in the peaceful use of nuclear energy. Renewal of the India-EU Science and Technology Agreement was welcomed by adopting a Joint Declaration on Resource Efficiency and Circular Economy.

Roadmap 2025: A Hint to Burgeoning Partnership

The EU-India Strategic Partnership: Roadmap 2025 was endorsed in the meeting. The Roadmap 2025 entails all the non-binding agreements between the two for the next five years. They are not commitments but mere plans to revive and enhance their cooperation on a plethora of facets.

It calls for strengthening and expanding the India-EU dialogue mechanism on foreign policy and security issues of common interest. Their shared objectives of non-proliferation and disarmament, maritime security, counter-terrorism and cybersecurity are highlighted. It beseeches for regular security dialogues to bolster their military-to-military relations. A maritime security dialogue is foregrounded in the Roadmap as well. Human Rights are consequential and are recognised along with fundamental freedoms.

Trade and investment objectives are amply listed; the dominant being escalation of mutual engagement through existing institutions and augmentation of market access to the Small and Medium-Sized Enterprises (SMEs). It also demands both sides to address existing trade barriers by organising regular dialogues on pharmaceutical and medical devices, boosting the existing dialogues in the Agriculture and Marine Joint Group, pursuing dialogue on customs through Joint Customs Cooperation Committee and engaging in the bilateral International Property Rights (IPR) talk. It requests for optimal usage of the Investment Facilitation Mechanism (IFM) cemented in 2007 for the promotion of the EU-led influx of investment in India.

Great attention is given to sustainable modernisation partnership for maintaining their allegiance to Agenda 30, Addis Ababa Action Agenda, United Nations Framework Convention on Climate Change (UNFCCC), Paris Agreement and United Nations Convention on Biological Diversity. It mentions their circumstantial long-term plan on reducing greenhouse gas emission by following strategies that are in compliance with the principles of equity and Common But Differential Responsibility and Respective Capabilities (CBDR-RC). The India-EU Climate Change Dialogue’s regular meetings would ensure their travails’ success in this direction. They must collaborate in international organisations such as the International Energy Agency (IEA), the ITER organisation, G20, the International Renewable Energy Agency (IRENA) and the International Solar Alliance (ISA).

For fostering cooperation on matters pertaining to the environment, the Joint Working Group on Environment and the Environment Forum needs to be revitalised. Cooperation on water-related matters can be forged through the Joint Working Forum on Water and the India-EU Water Forum. Research is pivotal specifically in these areas – soil biodiversity, sustainable management, air quality and use of forests; thus to support it cooperation is essential.  The Roadmap includes them along with the development of an international framework for sound chemical and waste management beyond 2020  for the fifth International Conference on Chemicals Management’s consideration in July 2021 in Bonn.

Urban development encompassing smart and sustainable cities requires the constant support of the European Investment Bank (EIB). The Roadmap also talks about the promotion of open, free, stable and secure cyberspace for better cooperation on cybersecurity. This can be reinforced by effective engagements between Indian and European companies and start-ups in the same field. India and the EU are also looking forward to organise an India-EU Aviation Summit and carry out the exchange in railways. Sustainable mobility including the deployment of eclectic vehicle charging infrastructure is given due importance.

The Roadmap tables the idea of instituting a Working Group for space collaboration in tandem with cooperation in space-related matters in the UN framework. It voices the requirement for partnership on Antimicrobial Resistance (AMR) and the promotion of sustainable food systems. Research and Development is of utmost significance in this five-year plan, it has to be implemented based on principles of the India-EU Agreement on Science and Technology concluded in 2001. The plans to widen the scale and impact of Horizon Europe (2021-2027) and collaboration on health and circular bio-economy areas are reiterated.

Information sharing and expertise regarding Artificial Intelligence (AI) and enhanced coordination in the UN and other multilateral fora are given priority in this map. The two have resolved to improve connectivity cooperation based on mutually agreed principles of Sustainable Connectivity including G20 voluntary Quality Infrastructure Investment (QII). This has to be concluded in association with third countries in the Indo-Pacific region.

The Roadmap stipulates for them to work towards collaborations in the Indian Ocean and the Pacific in compliance with the UNCLOS. They must address global trade challenges in the WTO and through G20 promote strong, sustainable and balanced growth. The taxation of the digital economy is alluded to in this plan. Marine resources’ sustainable usage and marine biodiversity protection are emphasised accompanying the exigency to support the legally binding instrument for the same in the UNCLOS. The Indian Ocean Rim Association (IORA) is to be recognised as an important organisation.

It calls for the launch of India-EU Annual Review on Development of Partnership in the third countries and engagement in the Coalition for Disaster Resilient Infrastructure (CDRI) to develop partnerships. The Roadmap also demands full implementation of the Joint Declaration on Common Agenda on Migration and Mobility (CAMM) for building people-to-people migration and mobility. Eradication of child labour and cooperation under Erasmus+ and its successors are given attention. Finally, effective annual India-EU Summits and ministerial meetings along with yearly reviews of the Roadmap are underlined.

Post cessation of the Summit, Vikas Swarup, the Secretary to the Ministry of External Affairs said, “There is no time frame set for the conclusion of the Bilateral Trade and Investment Agreement (BTIA) but both the sides have agreed that the two ministers mandated to talk the discussions forward should meet as early as possible.”

The Summit and its resultant Roadmap 2025 indicate the restart of the BTIA talks. Their ambitious plans to iron out their differences have ignited their zeal to work towards better future deals and partnerships. The FTA, officially dubbed as the BTIA, if signed early will prove to be mutually beneficial for them to recuperate in good time from the current global economic crisis and its outcomes.