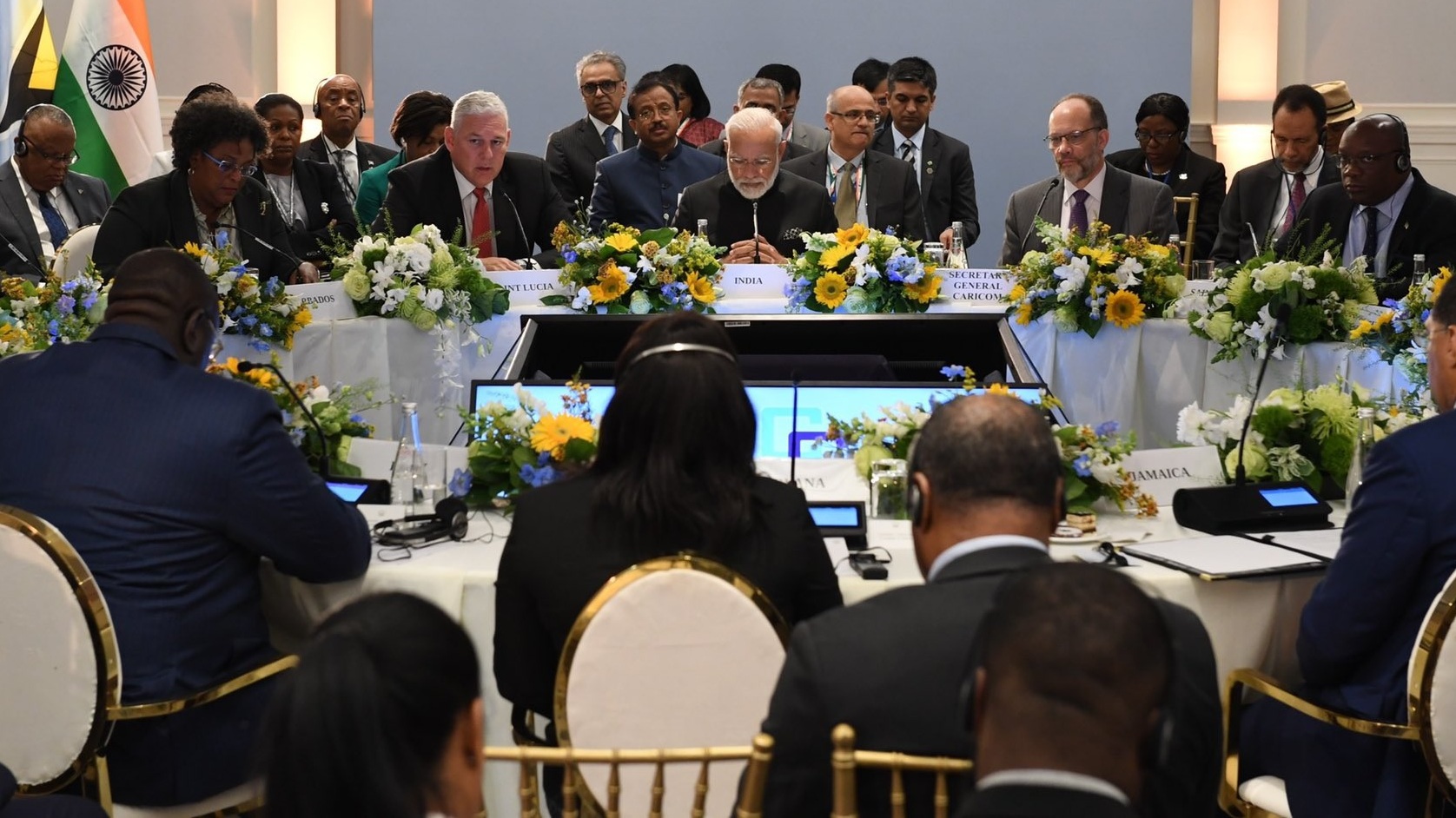 The small states of the Caribbean, given their size and location, have a very unique set of problems compared to the rest of the Latin American countries—be it economic, environmental or energy-related.

Their limited domestic market makes these economies reliant on export revenues and their openness to trade makes them vulnerable to fluctuations of the international markets. Natural disasters and climate change given their location add a new dimension to their security concerns. The Covid-19 pandemic, which has heavily impacted the tourism sector, is just a case in point. Another challenge is that many countries such as Haiti, Honduras, Guyana and Jamaica depend on remittances coming from the United States and Canada are likely to see a significant decline because of the economic impact of the pandemic.

These states have learnt to be innovative in order to survive. The Caribbean region has a long history of regional cooperation and efforts towards the integration of their economies along with attempts to increase their combined voting power in multilateral organizations. The Caribbean Community (CARICOM) often claimed as the most viable alternative for substantial regional progress, came into being by the Treaty of Chaguaramas in Trinidad and Tobago in July 1973 after attempts at a Caribbean Free Trade Agreement in the 1960s (CARIFTA). CARICOM comprises 15 members which include Antigua and Barbuda, Barbados, Belize, Dominica, Grenada, Guyana, Jamaica, Montserrat, St. Kitts and Nevis, St. Lucia, St. Vincent and the Grenadines, and Trinidad and Tobago, the Bahamas, Haiti and Suriname. It was the result of efforts made to formally resolve the economic difficulties of the CARICOM member states within the region and is considered to be one of the most advanced regional institutions in the developing world. The Revised Treaty of Chaguaramas in 2001 principally gave rise to an initiative or strategy known as the Caribbean Single Market and Economy (CSME), which if successful, would eventually integrate all member countries into a single economic space and allow free movement of goods and services.

India’s relations with the Caribbean countries may be traced back to the early nineteenth century. From this period till the early part of the twentieth century many indentured agricultural labourers from different parts of India were transported there to work in the plantations. With the introduction of sugarcane culture, the economic prospects of most of the Caribbean countries completely changed. Thus, ethnic Indians comprise between thirty to forty percent of the population in Guyana, Suriname and Trinidad and Tobago. Other countries in the Caribbean such as Jamaica and the Bahamas also have smaller percentages of the Indian population.

This means that there already exist strong emotional and cultural links between India and these Caribbean countries. A nascent market to cater to the demands of the Indians seeking to preserve their ethnic life-style associated with cuisine and other cultural artifacts had been created in the Caribbean. The demand for these products led to a commercial relationship with India even during the inter-war period of the 1920s and 1930s. Indian cinema too became much sought after. With independence and the establishment of diplomatic relations between India and the newly independent countries of the Caribbean in the 1960s, bilateral relations grew more in academics and sports, more importantly, cricket. Trade links were not very substantial at the time. One of the initial examples of bilateral relations was the establishment of the Indian Studies “Chair” at the St. Augustine campus in the mid-1960s in Trinidad, a result of the informal dialogue between Trinidad’s first Prime Minister Eric Williams and India’s Prime Minister Jawaharlal Nehru (Singh and Izarali, 2013).

While cultural links were already strong with India, it was only in November 2003 that it was agreed to set up an India-CARICOM Joint Commission during a CARICOM delegation visit to India. In 2005 the first meeting of India-CARICOM Foreign Ministers was held at Paramaribo, Suriname while the CARICOM Summit was on. The First India-CARICOM Economic Forum was held in Port of Spain, Trinidad and Tobago in August 2005, followed by the first India-Caribbean Conclave in June 2009. Several areas of cooperation were identified between CARICOM and India which ranged from socio-economic bilateral issues including trade, tourism and the fight against AIDS to political ones such as combating terrorism, the UN development millennium goals and its reform. While many areas of trade in goods and services and investments have been identified, India has continued to be supportive of the Small Island Developing States (SIDS). At a virtual meeting of the partnership for SIDS in June 2020, India claimed that it was ready to partner with SIDS in order to deal with the devastation faced by these countries.

Promotion of trade in goods and services

While the socio-cultural historical links of the Caribbean countries with India are very important, recent trends have shown that there is a greater potential for economic links through trade. There is no doubt that China already plays a major economic role in the Caribbean, but with its growing middle-class India’s population is likely to surpass that of China by 2030 and it can provide a large market (ECLAC 2011, 11). India’s total trade with Latin America and the Caribbean has averaged 117 million dollars between 2008-2010 while its trade with the CARICOM countries rose from 85.5 million US dollars in 2003-4 to 1195 million US dollars in 2009-10 (Exim Bank 2011, 72).

The major export destinations of India and import from the region to India are the Bahamas, Trinidad and Tobago, Haiti, Jamaica, Suriname, Guyana, and Barbados. India exports mostly pharmaceutical products, iron and steel, machinery and instruments to CARICOM. Crude petroleum, gold, metalliferous ores and scrap are major items that India imports from CARICOM (Exim Bank of India, 2011, 17).

One of the discussion points for services has been the rich possibilities in travel and tourism. For India, acquiring and renovation of hotels in the CARICOM region, which is a very popular tourist destination is bound to be fruitful. Investments in popular Indian style Ayurveda/ Yoga / Wellness centres in these hotels could really to cater to the rising demand for such services. Instructors can train local practitioners, which will, in turn, make these centres acceptable.

India’s foreign direct investment to the Caribbean is also generally on the rise though it has seen a moderate decline between 2011 and 2017. However, that is mostly due to the fall in FDI to British Virgin and Cayman islands, associate members of CARICOM. Of the total investments to Latin America and the Caribbean, 70 percent had gone to the British Virgin Islands and the Cayman Islands alone in 2011, (ECLAC 2011, 44). From April 2011 to November 2017, 46% of the Indian investments went to the British Virgin Islands accounting for the largest share among the LAC countries. The total investments between April 2011 to November 2017 in the Bahamas mostly in the construction sector was about US$ 163 million. In the same period, India invested a total amount of about US$ 17.6 million mostly in agriculture and mining in Guyana (Exim Bank of India, 2018, 13). Thus, there is also a change in the sectoral composition of these investments which have shifted towards agriculture and mining. For India, the Caribbean is strategically located for entry into the Latin American market. That is an added advantage that India should not forego.

Financial and technical assistance: India signed a contribution agreement with the CARICOM Development Fund (CDF) in January 2019, about ten years after its creation in 2008. India has agreed to grant US$ one million to the CDF’s capital fund. This makes India a development partner of CARICOM. CDF’s directive is to give financial and technical assistance to countries or sectors within the Caribbean Community in areas such as the development of renewable energy or increasing energy efficiency; providing physical infrastructure to encourage investments and trade; encouraging small and medium enterprises and developing human resources. India had put in a donation of US $ five million to help Haiti reconstruct itself after the disastrous earthquake of 2010.

In software and information technology, the Indian Technical and Economic Cooperation Programme (ITEC) is one of the prongs of the Development Partnership Administration established in 2012 in the Ministry of External Affairs, India. The government of India put in US$ 1.166 million worth of information technology and communication infrastructure and computer software at the CARICOM Secretariat in 2005-2006. A few slots for ITEC courses are reserved annually for the CARICOM members. India can also assist in increasing offshore medical centres, pharmaceutical manufacturing, including the supply of anti-retroviral drugs for fighting HIV/AIDS.

The Covid-19 pandemic has widened the need of all countries for cooperation and will test the resilience of the smaller countries. While many scholars have debated the end of globalization and predicted the inward-orientation of nations as they struggle to deal with their internal predicaments, it is much more vital now for countries to support and sustain each other. The outgoing Chairman of the Conference of Heads of Government of CARICOM had praised the CARICOM response to the Coronavirus as regionalism working in February 2020 (The West Indian, 2020). While Caribbean borders are closed to visitors during this period, it is essential for these countries to keep their borders open to trade and increase their energy efficiency capacity.

China has already seized this opportunity to help almost every country in Latin America through what has been called medical or facemask diplomacy. Chinese assistance has also been sent to several countries in the Caribbean such as Dominica, Grenada and Jamaica.

India has also made several overtures towards the Caribbean countries, providing immunity-boosting medicines and medical equipment including surgical masks, gloves, thermometers among others part as assistance and partly on a commercial basis. Jamaica, Suriname, Guyana and Haiti are some of the countries receiving assistance. Assistance of US$ 1 million for community development projects and immediate assistance of US$ 150,000 for medical equipment in Antigua and Barbuda were approved by the Indian government in April 2020 to address the Covid-19 pandemic under the India-UN Development Partnership Fund, supervised by the UN Office for South-South cooperation (UNOSSC). India has also discussed further economic cooperation and the sharing of medical expertise to strengthen health capacities online to be able to deal with such problems effectively.

Recently, the Indian prime minister while congratulating the new President of Suriname, Chandrika Parasad Santokhi, drew attention to his Indian origins by calling him a “friend of India”. Having the advantage of a sizeable Indian diasporic community in the Caribbean region along with the natural complementarities of products for trade with the region, India has been seeking closer cooperation and has been exploring further avenues for interaction—both bilateral and multilateral—based on multiple areas of mutual interests and concerns with the CARICOM countries. The Covid-19 pandemic has only emphasized the significance of this collaboration and cooperation.