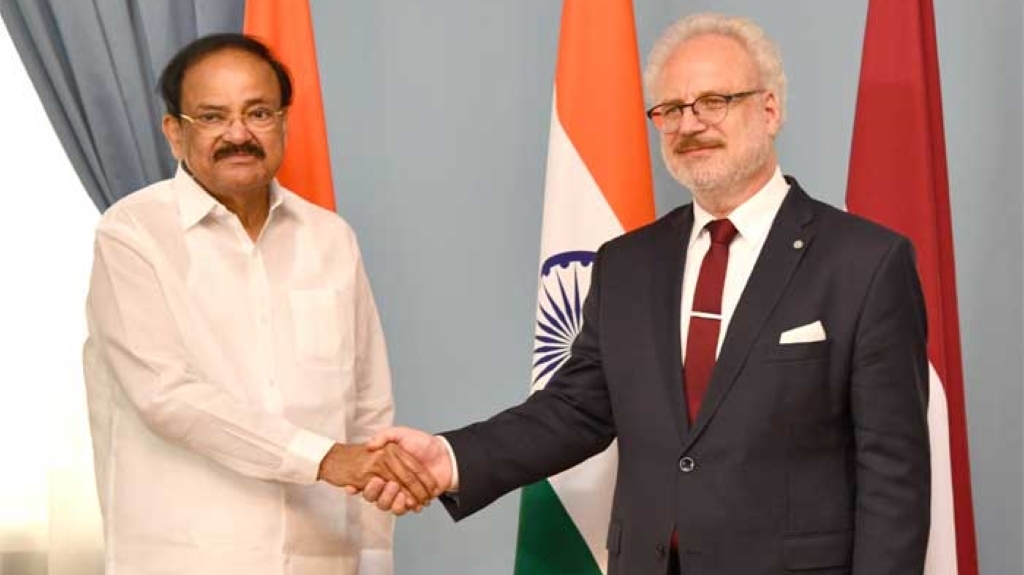 Latvia’s relation with India stands paramount importance in the Baltic region. Over a decade diplomatic ties with Latvia have grown exponentially and meticulously on a broad framework. A huge potential exists between India and the Baltic region which includes Latvia, Estonia and Lithuania.

Latvia’s glorious history of astounding rich values, culture and heritage with unparalleled diversity to inclusivity remained bountiful. Latvia is the cradle of the Baltic region’s biodiversity spelling the narrative of an unexplored paradise. Making pristine with its distinctive flora and fauna, Latvia is one of the richest in biological values in the world. Riga ranked the ninth greenest city in the world, the co-existence of nature and tradition describes the enduring eco-system and sets a perfect example of ‘unity in diversity’.

Blurbs- Prime Minister of India, Narendra Modi while emphasising foreign policy of his government stated, “We also need to understand that we shouldn’t consider smaller countries insignificant. The small countries of the world are as important as the big nations”.

Latvia emerges on the pillars of transformational reforms such as the construction industry, information and communication services, transportation, storage industry, ICT technology, education, etc. Latvia’s geographical location created a conducive environment to have a highly-developed transit service. The timber and wood-processing industry, agriculture, and manufacturing of machinery and electronics industries are set off successfully. Since 1990 Latvia progressed to the free market. With the fast-growing economy and stable macro-economic environment, Latvia has been recognised as one of the dominant players in the Baltic region. The European funding to Latvia mobilised to increase financial flow in research and development, facilitating investment attraction, enhancing information and communication technology and transport infrastructure. Exports have been developing dynamically in Latvia in recent years. In the competition among 190 countries Doing Business 2020, Latvia occupies the 19th place as the year before.

Latvia’s diplomatic ties with India were established in 1992. In a rapidly global environment, Latvia acquires a special place with increased salience. Latvia is at the forefront to share its expertise and development experience with other developing countries in the bilateral, regional and multilateral framework. Latvian people’s interest in Indian Culture has strengthened ties steadfastly. Latvia has continued to engage with India which is evident from the high-level interaction in the recent past.  In January this year Latvian Foreign Minister, Edgars Rinkēvičs paid a visit to India where he participated in the Raisina Dialogue. They discussed the India-Latvia bilateral relations, relations with EU, regional and global contemporary issues of mutual interest.

Both the countries pledged to take the understanding to next level through cooperation, institutional agreements promoting trade, investment, education and technology. Based on the development needs Latvia would support India’s candidature to the UNSC non-permanent seat for 2021-22 and India would support Latvian candidature to the UNSC non-permanent seat for 2026-27. To deepen the relations an India-Latvia Parliamentary Friendship Group was set up in Latvian Parliament in December 2010. India-Latvia friendship group was also set up in the Indian parliament. The Latvian Foreign Minister expressed confidence that Latvia is also pursuing its foreign policy priorities through active participation in international organisations: Latvia is a member of the United Nations Economic and Social Council and is running for the elections to the United Nations Security Council in 2025 and the International Law Commission in 2021.

Latvia and India are important economic partners and Latvia’s accession to the European Union creates enormous opportunities for the Indian business to enter the EU market through Latvia. Indian companies Latvia has become an investment destination as well. As an active member of euro-zone Latvia is emerging as an important mechanism for investment for Indian companies. Information and Communication Technology (ICT) remains the pivotal area where India can collaborate with Latvian companies. Potential areas of cooperation and trade/investment include Oil and petroleum, Pharmaceuticals and Healthcare, Telecommunications, IT and Software Development, Heavy Engineering; export of textiles, Gems and Jewellery, Chemicals and dyes, Vegetables and Fruits, Leather and leather products.

Bilateral cooperation between Latvia and India are multi-faceted and vibrant. Over a period of time both the countries have developed extraordinary cooperation in field education and information and communication technology.  Latvia’s ICT represents one of the outstanding outcomes of successful bilateral cooperation with India. The University of Latvia has established a “Centre for Indian Studies and Culture” which was formally inaugurated on September 9, 2013. Similarly, the Indian government opened a study programme on Baltic countries in Jawaharlal Nehru University at the Centre for European Studies in 2018. Since then many Indian students are opting for studying different sectors of the Baltic countries. The Center for Baltic Culture and Studies, at Dev Sanskriti University in Haridwar, is deriving huge benefits to the Indian students in the endeavour. Recognising the importance of people-to-people contacts between Latvia and India cooperation in education and culture enhances prospective endeavours.

Importance of Latvia to India in Baltic Region

Ever Since Latvia’s independence, the country has unleashed the potential in artificial intelligence, e-governance and e-security. The Baltic region has opened up routes for communication and transport. Latvia’s ice-free Riga port has attributed to connecting with the Baltic region to Europe, Russia and Central Asia. Latvia promotes greater connectivity for India to reach the European market. The European Union Climate and Energy support has created a tremendous capacity to build on the Baltic Nations energy security position by increasing production from renewable sources of energy. India is keen to invest in Latvia and the participation of India companies such as Indorama, Wipro, Tata Consultancy Services, Larsen & Toubro and Bharat Forge which is important for rapidly increasing bilateral trade of both the nations. Reflecting on the developmental needs India must rethink in establishing an Embassy in the Baltic region for greater efficiency and cooperation.  Prime Minister of India, Narendra Modi while emphasising foreign policy of his government stated, “We also need to understand that we shouldn’t consider smaller countries insignificant. The small countries of the world are as important as the big nations”.  In recent times trade between India and the Baltic region has grown immensely. Being a member of the European Union, the Baltic States has strength in economic stability. The Baltics have created a niche and solidify with Indian developmental needs in areas such as e-governance, education, and waste-to-energy. The relation between Latvia and India emphasizes on development and requires renewed efforts and determination from both sides in order to establish a solid foundation in the international arena.