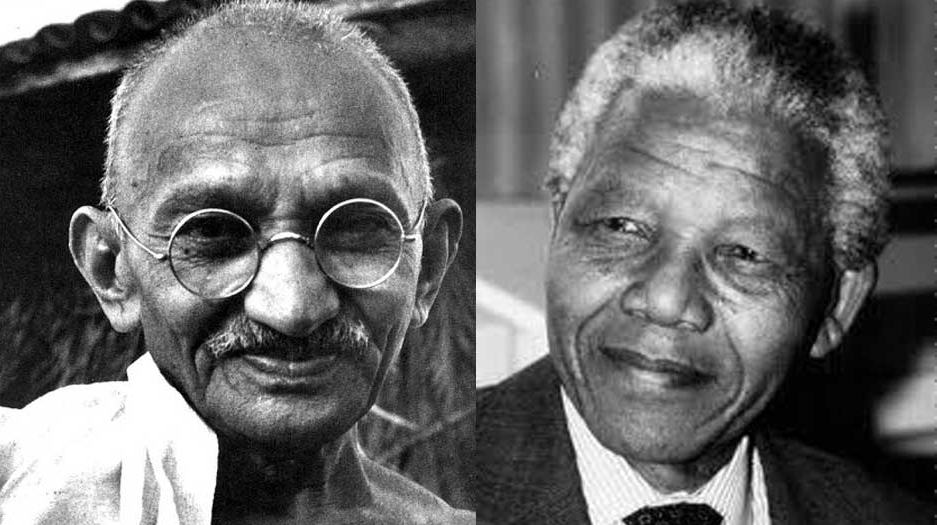 Nelson Mandela was, in many ways, during his lifetime, a practitioner of Mahatma Gandhi’s philosophy of Satyagraha or Truth Force, passive resistance and Ahimsa or non-violence. Mandela referred to Gandhiji as his role model and was inspired by Gandhiji to lead South Africa’s journey to independence, and was some times referred to as the ‘Gandhi of South Africa’. While Mandela and Gandhiji never met both were linked by a passion to end oppression and bring about change and took up the cause of their respective colonised countries and their subjugated people, inspiring them to resist oppression. Gandhiji’s philosophy and approach left an indelible mark on Mandela and it shaped his sociopolitical journey in South Africa. Though, we cannot really compare Mandela and Gandhiji, some of the similarities in the two leaders include Gandhiji’s emphasis on moral power being a force to reckon with and Mandela too believing in the power of moral uprightness; both were lawyers who spent time in jail in Johannesburg’s Old Fort prison (Gandhiji in 1906 and Mandela in 1962). It is said that it was during Mandela’s prison term of 27 years in the Robben Island prison, where the room was full of books of Gandhiji and other classics, spent in meditation and reflection, that the bitterness left his soul. Mandela and Gandhiji shared the conviction that all suppressed people, whatever their religion, ethnicity or caste must stand together against their oppressors.

It is an interesting coincidence that these two most prominent and inspirational world leaders had a connection with South Africa. Mahatma Gandhi’s journey to becoming a Mahatma (or great soul) began in South Africa and saw him being transformed from an ordinary subject of the British empire to a charismatic leader of the largely peaceful, nonviolent Indian independence movement. Through his philosophy and convictions, Gandhiji challenged the legitimacy of the British rule in India eventually leading to hand over of political control to the Indians and later on, in a domino eﬀect, to indigenous populations across the world, by the colonial European nations, and in South Africa by the apartheid regime, following largely non-violent, non-cooperation protests.

Was Mandela a Gandhian? it is not easy to answer this but the special, almost umbilical, bond between Mandela and Gandhiji was very real. Mandela was more a symbol of unity rather than of non-violence. Mandela studied Gandhi’s methods of non-violent resistance in college and was expelled for participating in a non-violent student protest movement and may have been disillusioned with the eﬃcacy of non-violence. Mandela founded the ‘Umkhonto we Sizwe (Spear of the Nation), the military arm of the African National Congress (ANC) in 1961after the Sharpville massacre, inspired at that time by Fidel Castro of Cuba. He was of the view that it was not possible to be non-violent when the apartheid government responded with force and violence, especially as in his words ‘the government had left us   with no other choice.’ This marked his move from passive to armed resistance.

Gandhiji, on the other hand, was of the view that only non-violent protest could transform the minds of the oppressors. At the same time, Gandhiji did not abjure violence all together and said where the choice is between cowardice and violence, he would advise the use of violence. Mandela considered Gandhiji as one of his teachers and said that he called for non-violent protest for as long as it was eﬀective. Over time, Mandela evolved from being in favour of the use of arms and force to oust the colonial apartheid rulers, to adopting a more non-violent approach after he understood the power of non-violence and the futility of violence, which would impoverish everyone materially, culturally and spiritually.

Mandela led a peaceful campaign after release from prison with emphasis on reconciliation and a unique approach of forgiving the enemy. Mandela learned the essential virtues of forgiveness and compassion from Gandhiji and adopted these after he assumed power as the first President of apartheid-free South Africa from 10th May 1994 till June 1999. He created an inclusive government of national unity, in which, F W de Clerk, the last apartheid-era president, became the deputy president, making South Africa a multi-ethnic and multiracial, inclusive country – a rainbow nation of peace and harmony. The Truth and Reconciliation Commission, an innovative experiment by Mandela, brought together those accused of rapes, bombings, assassinations and their victims and families, to testify before the Commission and seek forgiveness from the victims and families.

Mandela shared a strong connection with Gandhiji and India and stressed that in a world driven by strife, Gandhiji’s message of peace and non-violence held the key to human survival in the 21st century.

Amb. Manju Seth
Author is a career diplomat, retired from the Indian Foreign Service in 2014. A former Ambassador and Consul General of India, her last assignment was as Ambassador of India to Madagascar and Comoros.
Tags:
India SouthAfrica Gandhian Approach Mandela Day 2020 Gandhi
Share:
Share this...