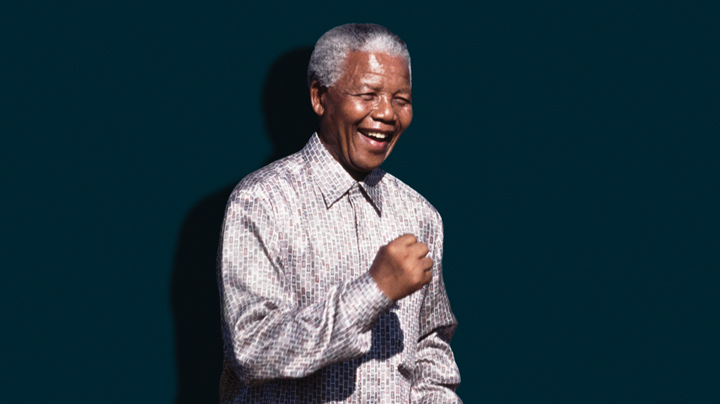 South Africa’s first black president, he is a global symbol of freedom and unity. His name quavered the global political landscape in advocating for human rights. Nelson Mandela was born in 1918 to a Xhosa Thembu Royal Family. At birth, he was named Rolihlahla, which means “pulling the branch of a tree”. It could also be translated as a positively disruptive thinker or a troublemaker. He was also named Madiba which in the Xhosa language means “Father of the Nation”. He further acquired the name ‘Nelson’ from his Methodist church teacher at the age of seven.

Mandela joined the University College of Fort Hare in the Eastern Cape Province, to study law, where he was recognised for being outspoken and standing up for justice. These traits got him suspended for his activities in the Student Representative Council. He eventually moved to Johannesburg in 1941, where he met Walter Sisulu and other members of the African National Congress (ANC). Mandela joined the ANC in 1944 while completing his law degree at the University of Witwatersrand. Once again, his outspoken nature distinguished him as the only black law student amongst his peers with a strong political will. The young Mandela grew to become very instrumental in the anti-Apartheid protests after the introduction of the discriminatory policies in 1948.

Between 1956 and 1961, Mandela was charged with treason for his involvement in the anti-Apartheid struggle. During this period, the ANC was proscribed and, therefore, Mandela, together with Walter Sisulu and Joe Slovo created a military faction out of it called Umkhonto we Sizwe. This action prompted his arrest in 1962 with a five-year sentence to prison with hard labour. Though a year later, Mandela was tried again, this time with charges of overthrowing the government. With the aid of international broadcast, Mandela who represented himself used the opportunity to tell the world about the great injustice suffered in South Africa at that time. However, he was given a life sentence, along with eight other members of Umkhonto we Sizwe.

Mandela was imprisoned for nearly three decades until his 70s; first, in Robben Island Prison for 18 years, then later at the Pollsmoor and Victor Verster prisons. The conditions in Robben Island were awful. Prisoners were held in a damp cell and used straw mats as the bed. Their activities were mostly breaking of rocks into gravel. Mandela initiated several hunger strikes in protest against the inhuman treatment he and other prisoners were receiving, which involved both verbal and physical abuse.

Despite being in prison, Mandela maintained his active support for the ANC campaign against Apartheid. With growing support for the ANC, there was a growing interest in his plight. In 1980, the UN Security Council called for his release which sparked a global protest for a ‘FREE MANDELA’ – a term coined by the anti-apartheid journalist Percy Qoboza. Mandela was however denied his freedom until May 1988 when he was given the conditions of denouncing the ANC, but once again, he refused these conditions and remained imprisoned.

Mandela’s fight for freedom took to the stages of a BBC concert at the Wembley Stadium to celebrate his 70th birthday in 1988. This concert was broadcasted in over 60 countries and received a global audience of about 600 million people. With the increasing global pressure, Mandela was eventually released on February 11th, 1990.

After his release in 1990, he took on leadership of the ANC and was then elected the president of South Africa on the 10th of May 1994.  As president, Mandela’s focus was the unity of South Africa’s multiracial society – the Rainbow Nation. He also changed the global image and international relations of South Africa and with this great feat, he was called the ‘father of the nation’.

Mandela started his tenure by expressing his commitment to equality with his call for the “emancipation” of women in South Africa – a call for equality across systems in South Africa. When Mandela was elected president, women held just 2.7% of seats in South Africa’s parliament. This figure has grown to 42.7% in 2019, demonstrating the progress in Mandela’s mission of gender equality.

He joined the fight against HIV/AIDS in 2000 when the scope of the epidemic became overwhelmingly evident in South Africa. By 2003, Mandela’s foundation launched the ‘46664’ initiative to raise funds for AIDS research and advocacy. In 2005, he spoke out about the loss of his son to AIDS, in an attempt to de-stigmatise the disease and create greater awareness of HIV/AIDS.

Mandela advocated for the rights of children, especially their right to education. In 2007, he founded the Nelson Mandela Institute for Rural Development and Education, to train and send high-quality teachers to rural areas and equip schools with modern facilities. During his tenure as president, he also donated a third of his salary to ending extreme poverty, hunger, exploitation, and homelessness.

After retiring as president, Mandela continued to raise awareness about the HIV/AIDS crisis in Africa. He also helped broker peace in the Democratic Republic of the Congo and Burundi. However, due to prolonged imprisonment, his health conditions continued to decline and Mandela retired from politics in 1999. Despite his retirement from politics, Mandela continued to be active and present in the affairs of South Africa. He also remained active globally as an icon for the struggle against suppression until he was admitted to hospital in June 2013.  Although his health seemed to be improving, he finally passed away in the late evening of the 5th of December 2013.

He was a hero who emerged from a little prison cell to help topple Apartheid, give privileges to millions of oppressed South Africans, and heal a wounded nation. An incomparable personality and devoted fighter for change, his eternal influence stretches across the globe; far beyond us all, in a time when Africa is desperate for change.