Emerging Areas of Cooperation between South Africa and India 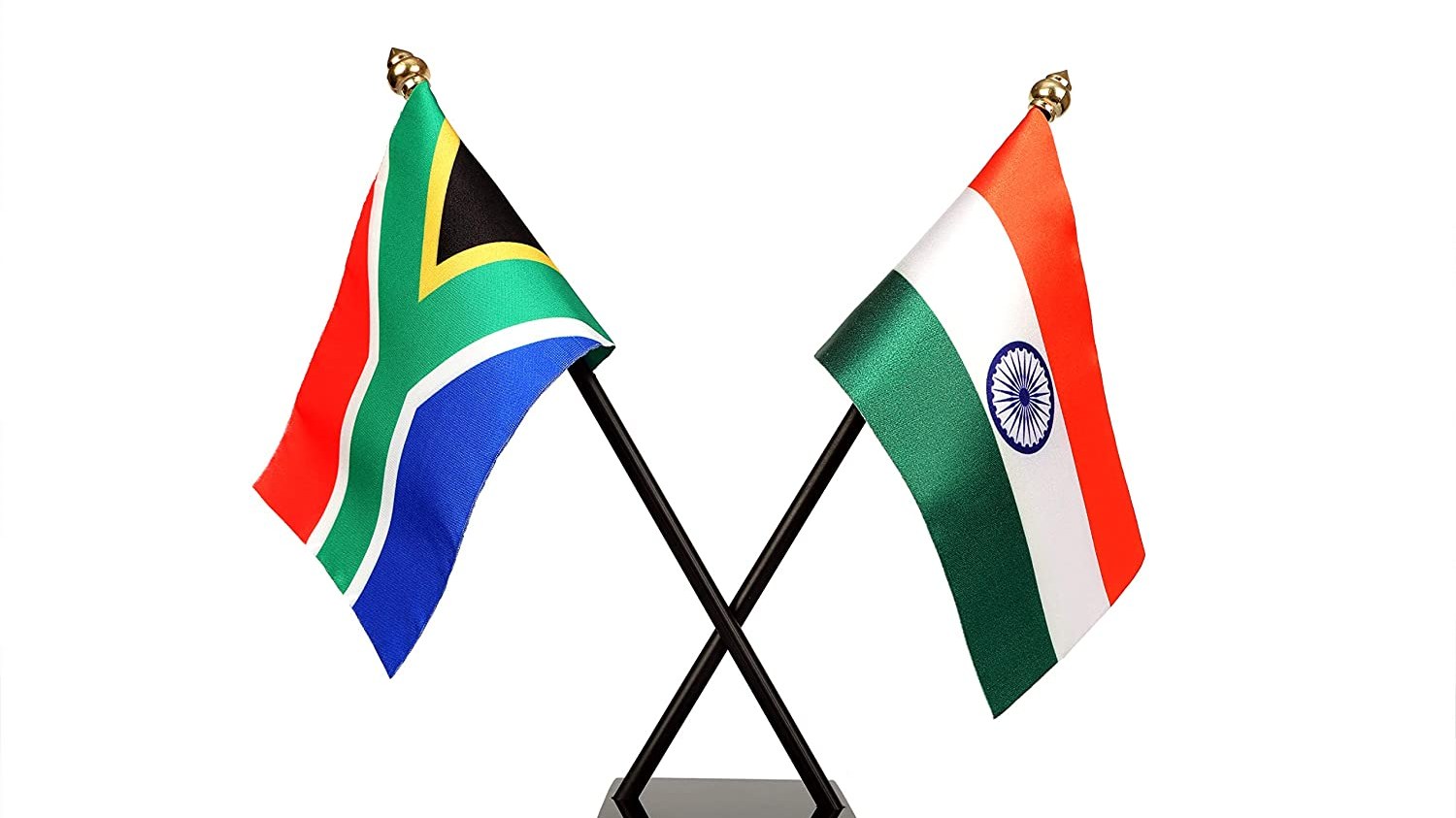 Relations between India with the Republic of South Africa has flourished and gained momentum over the last few decades. This account to historical links, correlative support of their endeavour against imperialism and racial discrimination, the presence of Indian diaspora in South Africa and shared discernment of major global issues. After the end of apartheid in 1994, both countries established diplomatic relations, close strategic, cultural and economic ties. Both nations are once former British colonies and full member states of the Commonwealth of Nations as Commonwealth Republics.

After the foundation of diplomatic relations in November 1994, South Africa and India sanctioned around 15 MoUs (Memorandum of understanding) on different domains including financial, Defence and socio-cultural cooperation.

In the year 2001-02, the Government of India came up with the “Focus Africa Plan” primarily focused on strategies to reinforce Indo-SA Cooperation in the area of bilateral trade, investment opportunities, transfer of technology, information technology, health care etc. South Africa and India’s relationship cultivated confidence after the 5-day official visit of President Thabo Mbeki to India. Another powerful element was added to the India-South Africa relationship when the External Ministers of India, South Africa and Brazil met in Brasilia for the project of India-Brazil-South Africa dialogue forum (IBSA) on June 6, 2003.

The Emerging Areas of Cooperation

Economic Cooperation: India is South Africa’s 5th largest export destination, and 4th largest import source and is the 2nd largest trading partner in Asia. Both countries are working to encourage trade quantities in the coming years. Bilateral trade between India and South Africa has increased from $1.73B in 2001 to currently stands at $10B. In 2016, both economies set the goal of multiplying bilateral trade and investment to $20 billion by 2021. South Africa, especially Johannesburg is the favoured location for plenty of Indian companies that have established their Africa headquarters. Another significant dimension of the growing bilateral economic relations is the relative integration between the two countries. The third aspect is the active exchange of business delegations and the expanding institutional framework that promote such exchanges. South Africa has shown interest in the exchange of skills and knowledge in advancing small scale and cottage industries. The main items exported from India are machinery, equipment, textiles, vegetable products, skins, leather hides and chemicals. Major imports from South Africa are mineral product, wood pulp and paper, base metal and products, chemicals.

Defence Cooperation: The defence sector is one of the oldest spheres of Indo-SA cooperation. There is tremendous potential for defence trade and mutual investments between India and South Africa. South Africa is the solitary major arms manufacturer and exporter on the continent. In the last few years of changed circumstances, there appears to be significant scope for cooperation between South Africa and India in defence research and production. In 1997, when the then Prime Minister, I. K. Gujral visited the country, the South African Defence Minister Joe Modise declared that the two nations would “enhance and intensify defence cooperation”, amidst South Africa offering a whole range of military hardware to India. South Africa supplied G5-2000 and T5-2000 trucks mounted guns of 155-mm’ ammunition worth $47M at very short notice during the Kargil conflict in 1999. South African companies also tendered for contracts to supply electronics, avionics, radar, sonar, UAVs and communication equipment for air, sea and land including underwater operations.

UN reforms and peace-keeping operations: UN reform is also another prominent space where Indo-SA can cooperate with each other. An issue to which both India and South Africa share the greatest importance is the reform and development of the UN Security Council. India believes that the reform and extension of the UN Security Council in both permanent and non-permanent classifications is integral to the procedure of UN reform.  India also believes that South Africa can play an important role in the overall process, within AU and in co-ordinated efforts of the AU and G-4. The idea of partaking in UN peacekeeping operations was a vehemently discussed subject in South Africa. India has been participating in a number of peacekeeping operations during the 73 years of its independence largely in Africa. These include MONUC (Congo), ONUMOZ (Mozambique), ONUC, UNOSOM II (Somalia), UNTAG (Namibia), UNITAF, UNOMIL (Liberia), MONUA (Angola), UNAMIR (Rwanda), UNA VEM and the most recent UN Mission in Sierra Leone. In the aftermath of the Cold War era, the responsibility of UN peacekeeping has befallen on the developing nations. Both South Africa and India look ahead to advancing the cooperation in the UN reforms and various peacekeeping operations.

Tourism Cooperation: The SA-Indian origin community figures around 1.5M and aggregates about 3% of South Africa’s total population. About 5% of the Indian community lives in Cape Town, about 15% in the Gauteng area and the remaining 80% in the province of KwaZulu Natal. South Africans originated in Indian are broadly represented in business, media, legal government, and other professions. The volume of foreign tourists from South Africa has risen at a consistent pace since 2001. Despite this, the share of South Africa in overall tourist arrivals in India has wavered around 0.6-1%. According to the recent stats, the share of tourists from South Africa has beheld a steady drop since 2010. Conversely, South Africa observed a remarkable surge in Indian tourists during 2016. Indian visitors to South Africa had surged by 21.7% to 95,377 during 2016.

Cultural Cooperation: Cultural exchanges, with the help of ICCR (Indian Council for Cultural Relations), have been organised throughout both the nations including scholarships for South African nationals. The department of Arts and Culture of South Africa sent cultural crews to India to take part in the international music & dance festivals. Art and culture Ministers of both nations have done multiple visits regarding the collaborations and inauguration of major art exhibitions. Both nations Jointly organises festivals of each other respective nations with the help of the Dept of Arts and culture and POC (programme of cooperation). The 9th world Hindi conference as held Sept 2012 in South Africa. On 21 June, International Yoga Day was commemorated by the Mission in cooperation with regional organisations in cities across South Africa. The 3rd International Day of Yoga was celebrated across South Africa in various cities for 10 days in 2017 by the post and three Consulates in assistance with local associations and organisations. Events such as quiz on yoga, essay writing competition, lectures on yoga, paint the T-shirt with Yoga asana for young children were part of the celebration in addition to Yoga day performances at historic venues.

The strong trade between India and South Africa is of substantial potential. The affinity between the two nations emanates immense promise for the future. India’s trade complementarities have significantly increased with South Africa. India and South Africa are the two salient emerging economies of the world with a strong history of understanding.

South Africa has a great scope for investments in India in areas such as retail trade, wholesale, manufacturing and financial services, agriculture, tourism, transport, mining, energy, information and communications technology. Continuing forward, there is a need to build economic cooperation between both the nations which would benefit in expediting bilateral relations in a positive direction. With more liberalisation of FDI policy in various divisions and the arrival of GST, FDI from South Africa is supposed to touch a new growth trajectory. Based on strong Intra industry trade and growth outlooks, the trade between the two nations is expected to double in the next five years.