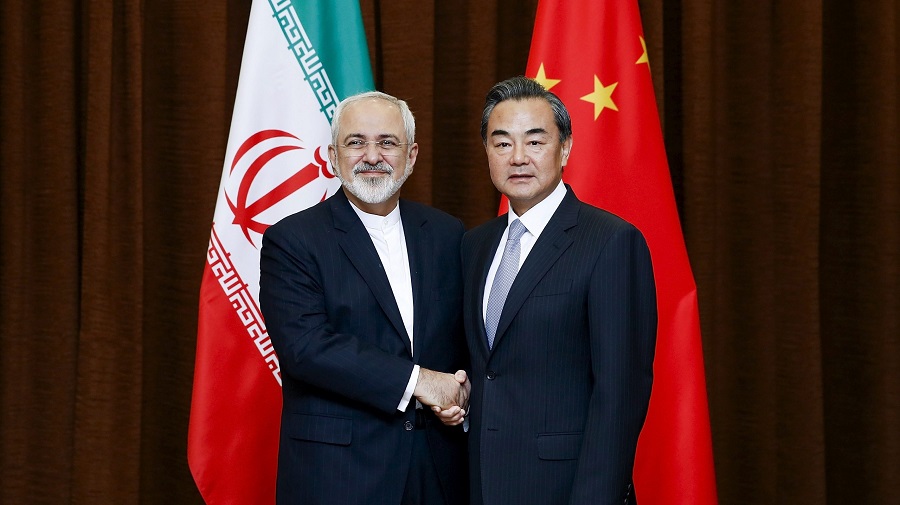 There is a talk of the strategic shift of the US from the Gulf and larger West Asia to the Indo – Pacific. The Chinese aggressive military posture is referred to as a determining factor for this shift. The Iran-China Strategic Partnership can be understood from the perspective of US policy towards Iran and China and the changing global geopolitical patterns.  The origin of this partnership can be traced to the 2016 Joint statement of the two countries during the Tehran visit of President Xi Jinping. As per the announcement of the Iranian Foreign Minister in the Iranian Parliament last week, the Strategic Partnership is for 25 years which covers considerable cooperation in the arena of security, military and economic engagement.

China has pursued a systematic economic investment in the region and brought all the countries irrespective of their political rivalry and hostility to its investment network. The four-day event of China-Arab States Expo in September 2019 in Yinchuan, the capital of the autonomous region, Ningxia in northwest China has brought the powerful arch-rivals of the region, Iran, Saudi Arabia and Israel under one roof. This Muslim-dominated region of China is also the starting point of the New Silk Route to West Asia. Chinese economic expansion in the region has weakened the US holds in the region. The partnership envisages deepening military cooperation between the two with joint training, research, exercises and weapon deployment and intelligence sharing. Thus the partnership will provide Chinese the usage of the strategic Iranian ports of Chabahar and Jask, located at the narrow entrance to the Gulf. The port Jask will provide the Chinese with an unprecedented vintage point for the surveillance over the passage of anyone to the Gulf. It is a critical challenge, therefore, to the US Fifth Fleet headquartered in Bahrain and the CENTCOM operation base in Qatar.

The deal involves a large number of projects including airports, railways, a free trade zone in Maku, north-western Iran and Qashem island. Such expansion of Chinese investments will widen the cracks in the transatlantic relations as the European countries as US withdrawal from the Iran Nuclear Deal and the subsequent ‘Maximum Pressure Strategy’ forced them to stop trading with Iran. This yawning gap will make the NATO unity difficult as many European members like France, Germany and Britain have long been at work for adjustment with Iran through INSTEX (Instrument in support of Trade Exchange).

Their inability so far to manage the US aggressive policy and sanctions against Iran has pushed Iran towards this strategic partnership. In the wake of the strangulating sanctions, the pandemic were choking the Iranian economy. This partnership can ease this economic prostration of Iran and restore the economic activity to deal with sanctions and domestic consternation. Iranian ports and Gulf infrastructure with Chinese cooperation and partnership will be an unprecedented challenge for the US military strategy and dominance.

The potential Chinese influence in the Gulf which has been the US stronghold for several decades can weaken its political alliance and allies in the region. This will change the balance of incentives in the region in favour of China in the future. Besides, China can use this position of strength in the Gulf as a strategic bargain to deal with US moves and actions in the South China Sea and the larger Indo Pacific.

The related infrastructure projects of the BRI process will extend the Chinese network of influence not only in Afghanistan but also in Central Asian countries. This partnership with its infrastructure projects has the immense potential can make travel easy to Europe via Turkey and through a Chinese string of ports in the eastern and northern Mediterranean.

So far China’s approach towards the region has been based on its policy of ‘Partnership Diplomacy’ which was limited in economic cooperation and development. This kind of cooperation and partnership has been very conducive and beneficial for China to expand its presence in the countries of the region irrespective of their rival political and military alliance. There is also a growing sense of security autonomy demand among the states in the region where the Chinese partnership fits into their aspiration unlike the US alliances and the policy position of other powers so far.

The strategic partnership of China with Iran can cause consternation and security concerns among the rival states of Iran in the region like Saudi Arabia and Israel. Any lapse in the balance can mire the region into a new and renewed stream of conflicts and violence. The US withdrawal and fatigued commitment can help China to deal with the differences of its different strategic partners in the region. The recent move can be a necessary security outreach in the region for its sustainable economic interests and energy security. Besides, it will boost its stature and provide a dependable alternative to the states of the region other than that of US.

Iran is the strategic junction from where power and influence flow all directions and is India’s strategic route to power in the emerging world order. It has further been deepened in the Indian strategic thinking and planning in the wake of the Trilateral Chabahar Agreement between India, Iran and Afghanistan, signed during the Tehran visit of PM Modi in 2016. The Chabahar-Zahedan railway was part of the transit and transportation corridor, an important strategic link to India’s Afghan policy. The Iran policy of the US and the sanction regime has weakened the Indian strategic position with the Iranian government as India’s import of Iranian oil was brought to zero due to the end of US sanction waivers.

There is a growing concern that the Iran-China partnership would impinge hard on India’s strategic interests in Iran and the region at large as it can lead to the dovetailing of the Chinese-run Gwadar port of Pakistan with Chabahar and the port Jask at the strategic entrance of the Gulf. But I firmly believe that Iranian strategic interests are in sync with that of ours. The Iranian decision on the Chabahar-Zahedan railway project is most probably owing to its domestic political compulsions as the Presidential election in Iran is due next year. The delay on the part of India is due to the ambiguity of US sanctions regarding the project. India is at work to get the US sanction waiver clarity but the US election is also making the situation hazy. India has, therefore, conveyed it to Iran that once the geopolitical situation stabilises by the end of the year, it will join the project later on. Meanwhile, Iran has expressed its commitment to the common vision and partnership with India as our partnership is built on a realistic and firm foundation. In the wake of recent Chinese aggressive patterns towards India, we must make the necessary move to enhance our strategic presence in Iran and boost the point of mutual strategic benefits before China can settle in their dominant strategic thinking.