Identity Politics, Democratisation, and The Rise of New Social Movement in Hong Kong 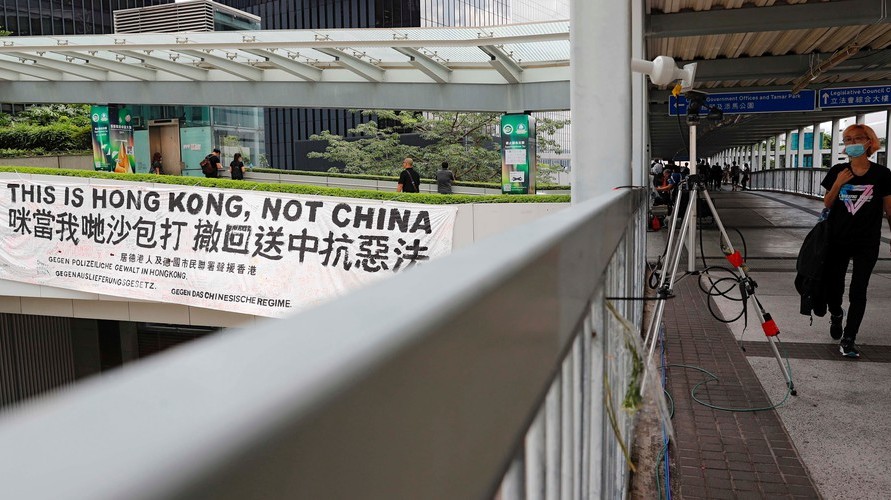 The foundation of Hong Kong laid with the imposition of former border controls between China and Hong Kong after 1949. Which was reinforced by the increasing devolution of powers from London to Hong Kong by the 1970s, and then the de jure recognised by the Sino- British joint declaration of 1984 and Hong Kong’s basic law in 1990. That time Britain handed over a young Hong Kong nation to China (Dapiran, 2020). The unrest over Beijing’s acts to resist Hong Kong from developing a democratic electoral system. Which gave rise to the “Umbrella” Movement in 2014 and 2019. The identity politics of Hong Kong’s people have created endless debates before the handover of the city from Britain to China in 1997 (Law, 2017). Recently people’s attention has drawn on the issues of identity politics among Hong Kong and China, local consciousness and political separatism. Pro-democracy movement with identity issue put the “One Country, Two Systems” formula to the test. Whereas most people did not expect China would allow the high degree of the autonomous rule to implemented in Hong Kong that Beijing’s interventions in local affairs have become regular. The rapid pace of integrating Hong Kong with China is turning Hong Kong into just another Chinese city. As a resulted frustration, radical thinking and ideologies emerged. This line of “localist” thinking also expresses its advocates’ strong feeling about their cultural difference with Mainland China. Their consciousness quest for autonomy and Democracy as Part of their battle to defend Hong Kong’s own culture and identity. On the other hand, the pro-Beijing establishment’s point of view, the persistence of dissenting voices in Hong Kong is attributable to the uncompleted process of “return” only by name which has succeeded only in political, not in ideological terms (Law, 2017).

The Sino-British negotiations over Hong Kong’s future in 1982–84 led to a new struggle over identity in Hong Kong. The process of decolonisation affected Hong Kong. The negotiation process in 1982–84 and the transition period of 1984–97 showed an exciting struggle of identities among the people of Hong Kong. The propagation of the “One Country, Two Systems” formula, with concepts of “high autonomy” and “Hong Kong people ruling Hong Kong”, “50 years unchanged”, put impact over Hong Kong people’s opinion during the Sino- British negotiations (Cooper, 2018). At that time for the young intellectuals and professionals who later formed the backbone of the democracy movement in the 1980s, after that the Chinese formula of “One Country, Two Systems”, “high autonomy” was appealing in more than one way. Most of them still had reliable identification as Chinese, believing that Hong Kong’s sovereignty should belong to China. The continuous tradition of the student movements and social movements in the 1970s, quite a number of them embraced anti-colonial ideologies. It was reluctant to support a continuation of colonial rule. On the other hand, growing up in Hong Kong, they treasured various “core values” in Hong Kong, including the respect for personal freedom, freedom of speech, the rule of law, a clean and efficient civil service (at least it was so after 1974), and a capitalist system that has a high level of economic freedom. Under the influence of Western liberal values, they also wanted to see a democratic policy instituted after 1997. (George Chen, Jun 17, 2015) The “One Country, Two Systems” formula was ideal in the sense that Hong Kong would return to Chinese sovereignty. The Hong Kong lifestyle was maintained beyond 1997 for at least 50 years. The young student activists in the 1980s, the “One Country, Two Systems” provided an excellent pragmatic formula that allowed them to accommodate both their Chinese and Hong Kong identities. (This should also apply to a lot of Hong Kong people at the time). The Chinese nationalist sentiments were taken care of by the return of the sovereignty to China after 1997. With “Hong Kong people ruling Hong Kong” and “high autonomy”, they did not have to live directly under the Chinese Communist rule. Hong Kong was also not going to adopt the socialist political system, economic system and style of social management after 1997. A large part of the Hong Kong identity was to be maintained, in the form of preservation of the way of life and the protection of the major institutions (including the rule of law and civil liberties). Precisely democratisation has seen as the best means to protect the high autonomy of Hong Kong against possible communist intervention after 1997 (Cooper, 2018).

The rise of anti- China sentiments arouses highly from 2008 to 2014. In that time, Hong Kong’s national identification marked highest after 1997, as resulted in the new Anti-China movements led by young generations those who believed Hong Kong has an identity that is different from Chinese sentiments. The problem of “generational difference” among the people of Hong Kong, the old generations used to with post-1997 immigrants from Mainland China, who came to Hong Kong for their trade or materialistic purpose, those who did not bother about Hong Kong’s sovereignty post the 1997 negotiations. The new generations of Hong Kong highly recognised their own identity and cultural values and restored Hong Kong’s own identity (Cooper, 2018).

Hong Kong public opinion (HKPOP) survey published in 2019, which showed the identity index of Hong Kong people. The result of the latest study exposed that 27 percent of the people recognised them to be a proud citizen of China after 1997, whereas 71 percent of people did not have strong emotions for China also they supposed not to like Chinses polices and law over Hong Kong. On the other hand, 23 percent, people showed positive assessment for policies were taken by the Chinses government in Hong Kong, and 53 percent of people have demonstrated negative assessment for chinses polices in law (Tai, Jun 27, 2019).  The dichotomy of “Hong Kong people” versus “Chinese” identity. The proportions of people identifying as “Hong Kong people” outnumber those of “Chinese” both in their narrow and broad senses; as a result, these people who are identifying them as “Hong Kong” people in narrow or broad reasons and the record high since 1997. In contrast, the proportions of people who are identifying them as “Chinese” in narrow or broad senses expressed the record low since 1997. The young generations are most likely not to feel proud to become a Chinses citizen along with negative towards Chinese city polices and government (Tai, Jun 27, 2019).

The rise of a new social movement “Umbrella”

The inspiration for Global social movements alike Tahrir Square protests in Egypt Occupy Wall street’s movements in the US these movements put an impact on twenty-first centuries global awareness of the changing social context and wide unrest situation worldwide. The critical element of global protest could also be seen in Hong Kong’s Umbrella Movement in 2014 and later again in 2019. The political distrust and the promises delivered by the HKSAR government not fulfilled. As a result, the deep sense of hostility between ruler and ruled was developed the sense of movement “Umbrella” in Hong Kong (Cooper, 2018). In 2014 the occupy central or Umbrella movement was a large scale of civil disobedience in Hong Kong. The background of the movement Hong Kong people demanded their Universal suffrage and democratisation from Beijing controlled Hong Kong (Dapiran, 2020). After five years later in 2019 the protest again rocked in Hong Kong. The spark has continued for more than a hundred days this time. The city has seen marches, violent clashes and protests with police and other groups.

The city of Hong Kong was increasingly polarised due to high tension among rulers and ruled (LAM, Sept 28, 2019). The movement encouraging people of Hong Kong especially young minds to speak up for their rights and freedom, voting which is a “civic referendum” and other forms of expression has shown along that “Umbrella” occupation was a crusade about emerging self- determination for political identity. Near about two million protesters marched for this movement. It was an awakening movement for Hong Kong people who expelled the bondage of Beijing control over their day-to-day rights. The Umbrella Movement was a major turning point in the struggle between Chinese identity and Hong Kong identity in the democracy movement of Hong Kong. The movement carried about huge arousals but no palpable official changes for the fate of Hong Kong (Cooper, 2018).

After 1997 on Jul 1 Sino- British joint declaration was negotiated to hand over the sovereignty of Hong Kong to China. This time chinses community those who were living in Hong Kong were prosperous and economically stable than Chinses other cities. In Post, 1997, people of Hong Kong were maintained their own identity and culture. They were different from Mainland Chinese immigrants those who stayed in Hong Kong, for their trade and business purpose (most of them). They are less interested in Hong Kong’s political culture, sovereignty and prosperity. The Chinses leader Deng Xiaoping observed the Hong Kong city. With the rule of law and human rights. The leader wanted to Hong Kong lead China forward, but his successors did not have the convictions to pursue his great China dream. At that time, the Chinese government changed the flag and governor in Hong Kong rest everything remained the same. Deng Xiaoping wanted the Hong Kong community to lead China, but his successors could not have the courage to do that – Martin Lee. The latter is a former member of the Hong Kong bar association and former member of the drafting committee in Hong Kong (Lee, 2019). A constant background-noise level of discontent and civil unrest occasionally bursting out into violent confrontation becomes part of its people’s life that is structural and it can be built into the very design of Hong Kong and in the face of the unrepresentative political system. Identity and linguistically protests have proven to be an effective means of forcing a political change in Hong Kong, whether blocking the extradition bill, Article 23 laws, the Cantonese people’s identity crisis, or the national education curriculum. As a result, the protest became the end in itself because the point of the rally was to protest (Dapiran, 2020). Sooner or later, the whole world will have Democracy, and even if China to be the last country to have Democracy, Democracy will still arrive in China. It’s challenging and allows people to say impossible. Still, there is always a chance.

2 replies on “Identity Politics, Democratisation, and The Rise of New Social Movement in Hong Kong”