The Chicanery of China in Kiribati 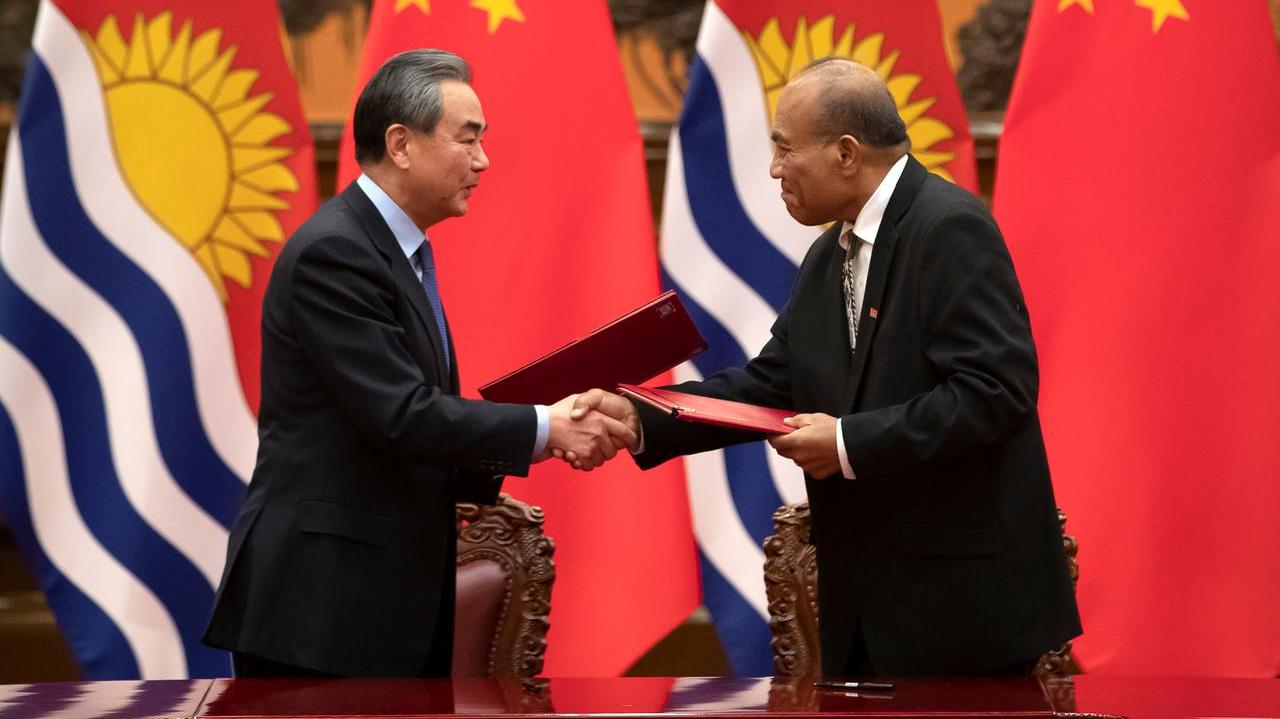 The Pacific island nation of Kiribati is home to approximately 110,000 inhabitants. China and Kiribati established diplomatic relations in 1980 and later resumed their ties in 2019 post-Maamau’s win in the elections.   China has set its footprint in the pacific nation through its flimflam ‘checkbook diplomacy’.

Earlier Kiribati did not have diplomatic ties with China. But post-2013, Kiribati has been springing towards China and has also accepted the ‘One China policy’. According to the Kiribati media, President Taneti Maamau defeated the opponent leader Banuera Berina, who was a former ally of Maamau. In 2016, Maamau was elected on a commitment to maintaining affinities with Taiwan but in 2019, to his party’s astonishment, Maamau had declared his choice to shift his support for China that led to split in the party and Berina later standing as an opponent to Maamau in the elections. Berina, the opposition leader became the rival of Maamau due to the puzzle of Maamau’s pro-china stance. This unforeseen shift to China earlier did not receive an optimistic response in Kiribati. Various protests were beckoning Taiwan flags and anti-China slogans. Though the embassy of China in Kiribati asserted that China does not meddle with the internal affairs of other nations, there were sharp reactions against China when the diplomatic mission of China actively engaged throughout the election campaign. China has featured massively during the election campaign with guarantees of aid and charges of bribery.

As per the previous Kiribati president, Anote Tong, the presidential race in Kiribati between a pro-Taiwan candidate Berina and a pro-China candidate Maamau is considered as the most contentious election drive in Kiribati’s chronicle. This re-election of Maamau has made China expand its foothold in the Christmas Island of Kiribati, which is held as the world’s biggest atoll.

Keeping in spirit the one-China policy, China wants to engage with the Kiribati government to advance the perpetual progress of Sino-Kiribati relations. China has been working to crush and subdue Taiwan’s worldwide attendance to wholly suppress Taiwan’s sovereignty. China alleges that Taiwan has no right to official affinities with any country. When Taiwan decided to shut its embassy in Kiribati, China has re-opened its Embassy in May 2020. Lately, several Pacific island nations that were aligned with the U.S for a long period are now forming ties with China that are attempting to expand its economic clout and jostle its diplomatic connections in the region. Since 2016, Kiribati is the 7th nation to cut ties with Taiwan as a diplomatic partner after the Solomon Islands, Panama, Sao Tome and Principe, Burkina Faso, Dominican Republic and El Salvador. Soon after the Solomon Islands and Kiribati severed ties with Taiwan by establishing ties with China, the U.S and Taiwan mutually held their inaugural “Pacific Islands Dialogue” in Taipei to address global co-operation on funding outlines in Pacific Island nations.

China’s expanding proximity in Kiribati could further prove fractious, between the superpowers and among the atolls. Kiribati was the base of China’s primary international space tracking station that performed a critical function in the BeiDou navigation systems and Shenzhou manned space missions. Since Kiribati already is home to the Chinese space tracking station, China wants to advance its space ambitions. The island nation is positioned just a few miles of Honolulu that is a base to the U.S pacific command and is also positioned just south of the Marshall Islands, a significant missile testing location for the U.S. Kiribati’s area and strategic position makes it a critical factor to the Chinese expansionist government of Xi Jinping. The intelligence bureaus of the west have personally expressed the predicaments emanating out from China’s influence in Kiribati because China wants to yet again use the island nation’s space tracking station to observe U.S. missiles and other weaponry experiments in the Pacific.

The Chicanery of China through its sharp power and checkbook artifice has once again re-surfaced after the island nation received more than $4.2 million from China for ‘maintenance projects’. China has recently taken hold of economic ventures and fisheries to re-install its propinquity with Kiribati apart from stinging political cliques and expanding its weight. China has further gone ahead to lure Kiribati through the first shipment of pharmaceutical stocks distributed by China, as part of the Chinese assistance to assist the country to combat COVID-19. After facing global criticisms about turning COVID into a pandemic, China is attempting to paint a positive picture through its medical diplomacy, an experiment that has flopped miserably.

Kiribati seems to be next on the list in the debt-trap preying by China as the island nation has further joined the Belt and Road initiative. To further entice Kiribati, China has also decided to offer ferries and commercial airplanes apart from providing financial assistance and loans. Other Pacific nations have begun to insinuate that massive inflows of financing and loans by China led to undermining governance, debt crisis and growing debasement. Even as countries like Australia and the U.S have come to view the Pacific as their courtyard, China has been expanding its aggressive role in the Pacific region. There are also alarms raised that Kiribati could become the Pacific story of Sri Lanka’s ‘Hambantota port’ when China got a 99 years lease on the port after Sri Lanka slipped to reach its debt commitments to China. The expansionist artifice of China across the Pacific region to replace the U.S and its comrades may now be determined by Kiribati, a miniature yet a strategic island nation, keeping in the picture Maamau’s pro-China stand and his election victory.