The Malacca Dilemma and Chinese Ambitions: Two Sides of a Coin 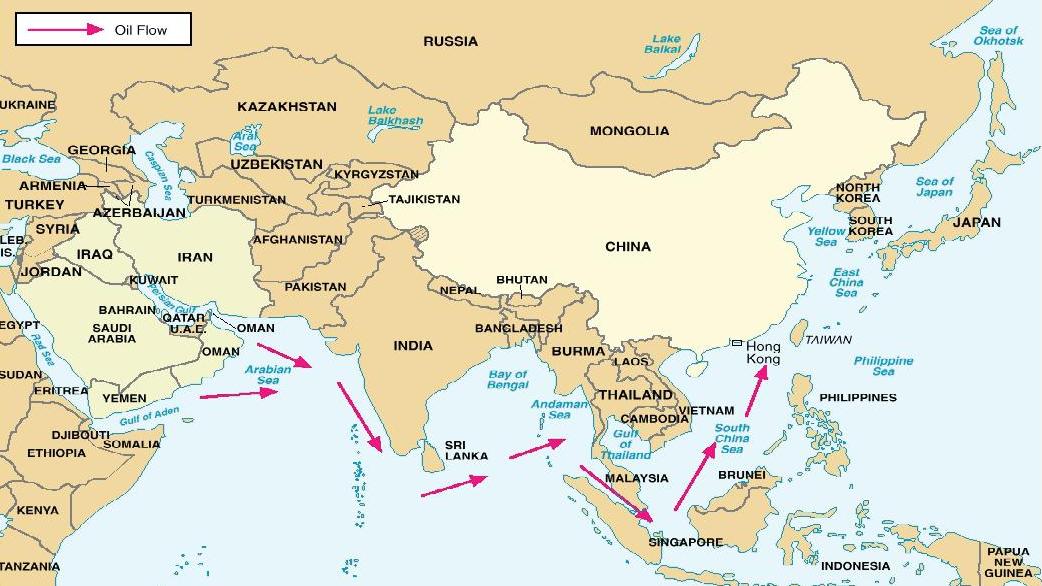 Malacca Dilemma is a word coined in 2003, by the then Chinese President Hu Jintao. It is a term that represents the potential factors that could hinder China’s economic development through choking oil imports. China is the world’s largest importer of oil, accounting for 80 percent of the total oil used by the country, mainly secured from the USA.

The strategic location strait of Malacca Falls between Sumatra Islands and Malay Peninsula and has Singapore to its east. This narrow stretch of water could be easily blocked by the rival nations of China, affecting the big China machine, in lieu of the fact that around 80 percent of its exports pass through this strait.

Singapore inevitably plays an important role as it is an ally of the USA and India and could possibly be influenced by them. It has been feared by China that this could possibly materialize somewhere in the near future as the politics are dynamic in nature. If it happens, it could slow down the big china machine, something that china is not ready to accept amidst its “China Dream”.

In the search of alternate routes, most of them like Sunda Strait, Lombok and Makassar Straits have been proven dissatisfactory as the former is shallow and the latter ones are longer routes that could incur huge financial burden with shipping costs estimated around $220 billion per year.

The Quest for a Path

Searching for land route alternatives has been in place that could Possibly help China. One such idea was to build a canal through Thailand’s kra isthmus Canal. But, it is far away from compromising due to the fact that the canal would give China control over Thailand, a deal that Thailand would probably not entertain. Many Such proposed routes have been proven Unsatisfactory. China has after all come up with various steps to reduce its dependency on Malacca Strait. One such project is GWADAR-XINJIANG port, as a part of its $50.60 billion investment for China Pakistan Economic Corridor in Pakistan, focussing on importing oil through Gwadar port linking it with West Asian countries.

China seems ambitious about the project. But, a question always raises concerns while considering the landscape and terrain along the proposed route. Karakoram range is prone to frequent earthquakes, landslides and the most importantly extreme temperatures. It is convenient to say that the terrain facilitates the transport of oil through such altitudes without it getting frozen. Can massive railways with barrels of oil pass without any hassle? It is estimated that transport of a  barrel of oil through sea route could only cost $2, while this pipeline could cost somewhere between $12 to $15, which heavily implies the increased cost of transport. Besides, the proposed route is plagued by active terrorist groups who can most likely disrupt the trade and delay the chance of hassle-free transport.

CPEC as a whole hurts the sovereignty of India, as parts of it pass through the disputed regions of Jammu and Kashmir. India had expressed concern multiple times, for the past few years. Putting beside the theoretical prospects of the pipeline, it is for future dynamics to decide as to what extent this route could materialize.

Ever since the COVID -19 set the foot in, the world order has undergone dramatic changes. It has transformed the world fundamentally while altering the definitions for power and security as we know them. The intensifying commercial tensions between the US and China became more contradictory in nature. The Sino-American ties known for their strategic partnership is aiming to contain the erstwhile Soviet Union does not exist today. The President of the United States, Donald Trump recently called coronavirus a Kung Flu referring to the Chinese martial arts practice. This clearly states the fact that Trump governed America is far away from being friends with china at the moment. Further, the recent face-off between India and China in the Galwan Valley has escalated the tensions dramatically as China is being held responsible for the attack.

That being said, the Malacca dilemma could someday land China with the difficulty of acquiring control overland routes, possibly congesting the Chinese trade alongside dumping its cheap goods in Asian countries. The straining Chinese relations with countries like the USA and India only signal the idea that China should decrease its over-reliance on Malacca strait while the question lies if CPEC is an ideal solution.

7 replies on “The Malacca Dilemma and Chinese Ambitions: Two Sides of a Coin”