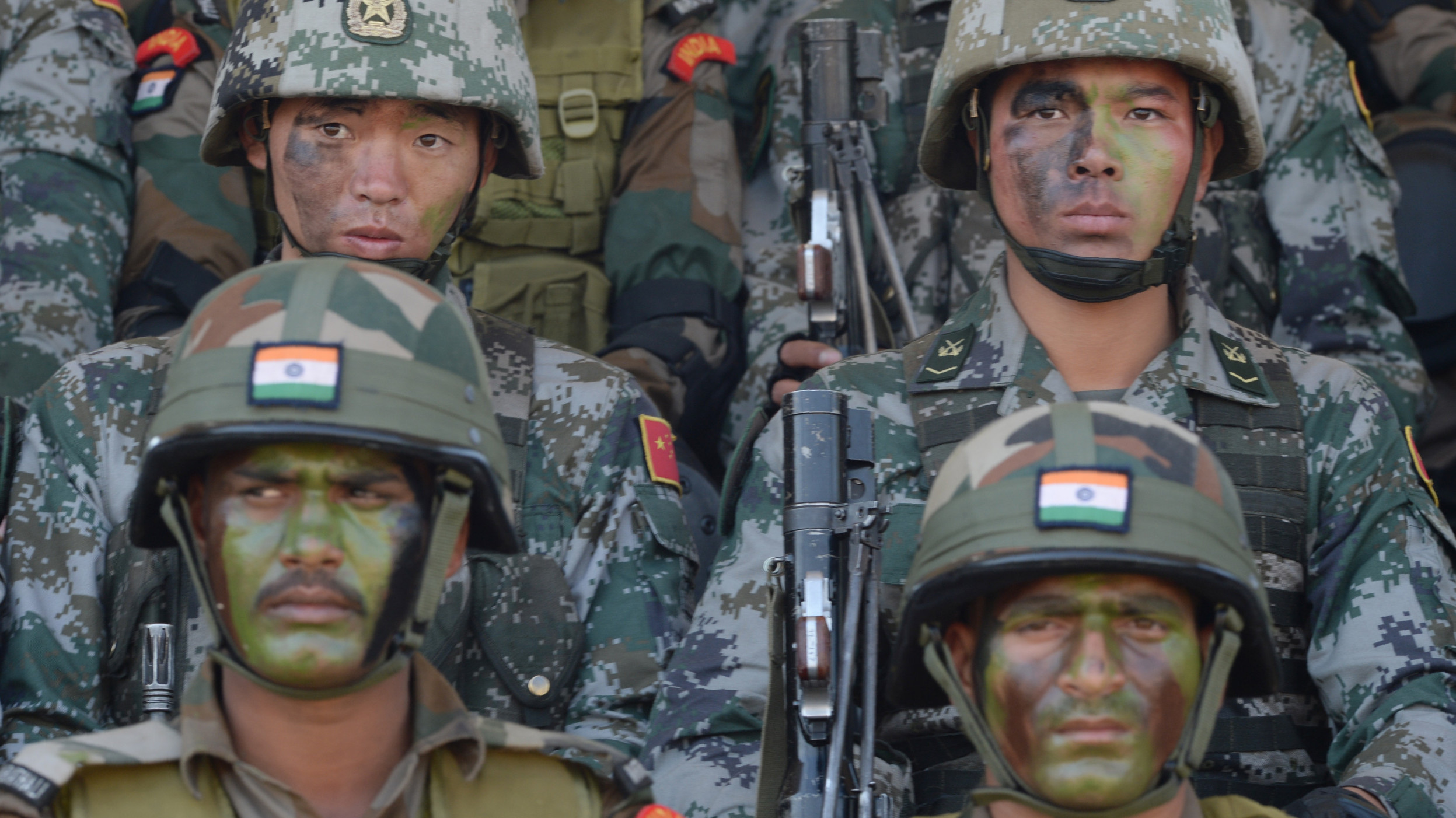 The 2020 China–India skirmishes at Galwan river valley are part of an ongoing military standoff between China and India. Since 5 May 2020, Chinese and Indian troops have reportedly engaged in aggressive melee, face-offs and skirmishes at locations along the Sino-Indian border, including near the disputed Pangong Lake in Ladakh and the Tibet Autonomous Region, and near the border between Sikkim and the Tibet Autonomous Region. Additional clashes are ongoing at locations in eastern Ladakh along the fuzzy Line of Actual Control (LAC) that have persisted since the 1962 Sino-Indian War. Surprisingly China is now putting its ownership claim on Ladakh as the western part of its Xinjiang province.

In late May, the Chinese PLA objected to Indian road construction in the Galwan River valley. According to Indian sources, melee fighting on 15/16 June 2020 resulted in the deaths of 20 Indian soldiers (including an officer) and approximate casualties of 43 Chinese soldiers (including the death of an officer). Several news outlets stated that 10 Indian soldiers, including 4 officers, were taken captive and then released by the Chinese on 18 June.

Tension is reaching alarming proportions at the Ladakh region in the cold Himalayas since 15th/16thJune, 2020 when border clash took place between the two contending sides China and India, although according to some sources the Chinese have been preparing for many more days for this operation without actually going into direct war. ‘….Since early May (2020) the Chinese side had been amassing a large contingent of troops and armaments along the LAC’. The Indian Army is ready for any bad situation at the Eastern Ladakh. Lots of troops have arrived there along with T-90 Bhisma Tanks, ground-to-air and firearms. The air surveillance system has been maintained. In the last week Army Chief, after completing two days’ visit to Ladakh, briefed the government as to the situation at the border as well as the preparation of Army. It should be kept in mind that the approved military policy of New Delhi is not an aggressive move by itself. However, keeping in mind the bad situation, the concerned authority has beefed up arrangements in full swing so that there is no shortage of military equipment.

Although there is a dispute with China over the Line of Control, India adopted the idea of a Line of Control in 1993 in the interest of peace. But this is just an idea for the two forces of China and India. Again it is true that there is no agreement or nothing formal is specified on the map, nor is it determined by any post of the army of both countries, in this regard. Interestingly, the issue was never finalized with China. According to India, the length of LAC is 3488 km, whereas China’s observation is that the length of LAC is 2000 km. Now in this context we may shed some light on the difference between them. In the case of LOC, the armies of the two States stand guard against each other. There is an almost regular exchange of fire between the two sides, whereas, in the case of LAC, no one is on guard on both sides. Along the Actual Line of Control, the distances between the two States’ Army Camps are in many cases at least 50 km away from LAC. Although the two countries are monitoring here, no one is standing guard.

At least this has been going on for so long. But interestingly, from now on, China wants to turn LAC into LOC, according to the Army Officer. From Galwan base to Pangong Lake – as far as Chinese Army-men consider the area of their own, or what they think is the real Line of Control that is what the bases are. Due to all these, the Indian army has to be stationed on the opposite side of the base, so that China could not proceed further. China wants this to be normal from now on. But the Indian Army will not allow that to happen. Ultimately the decision to engage in ‘disengagement’ was taken at a meeting between the two countries at the military and diplomatic levels. When did the Chinese army retreat and return to its previous position – that is what we have to observe now. In fact, the real challenge is to force China to beat an immediate retreat without any corresponding condition that their withdrawal of forces would be contingent on Indian move away from eastern Ladakh.

The interesting point to be noted in this context is that the LAC with China is not drawn on any map whatsoever. The two countries follow their own ideas. China does not even acknowledge the McMahon Line in the Sino-Indian border. This is the reason why no one used to come to LAC and set up bases so that there would be no clashes on a daily basis. So there was a gap in the middle. Now the ‘Actual Line of Control’ is practically becoming the ‘Line of Control’.

But why exactly the Chinese Army is coming to LAC and sitting over there by making it a base is a critical question. Of course, China is trying to encroach upon the Indian territories by dint of its military might. However, this time the most remarkable point about Chinese military infiltration, according to some commentators, are “the scale and sophistication of Chinese moves in terms of both troops and equipment”. This seems a very ominous tendency. Besides, most of the time relating to border conflict China follows a policy of ‘two-step forward and one step back.’ It may be pointed here that in the case of Doklam, too, China eventually backed down from this policy and here too it is likely to be repeated. China is building a base in the Galwan valley in such a place, wherefrom they can keep an eye on the Daulat Beg Oldie Road of India. In Pangong Lake, they camped at such a place, called Finger Four, so that India cannot go as far as Finger Eight, the easternmost point of the border. In a similar way, in the Depsang Valley, China after crossing LAC entered 1.5 km and reached the area known as Y. Johnson, so that Indian soldiers cannot go to the 10th or 13th patrolling points. It is thus an ill-motivated attempt to change the status quo in China’s favour. On June 15, the Chinese army was pushed back from there, but they broke the agreement and returned. According to the critics, ‘disengagement’ to China means retreat of the Indians, not of the Chinese. Actually, the Chinese will not move. This is an important question for the Indian government to consider. As per the Army Official, China wants to change the image of LAC not only in Galwan but also in Pangong Lake, Depsang, Chumar, Demchak and Gogra, etc.

The LAC in Ladakh has practically taken on the look of LOC because of the difference in words and deeds of China on the question of retreat. Both forces have deployed large armies on both sides of the Line of Actual Control. However, the situation is being monitored.  Only in Ladakh has the deployment of Indian troops doubled; right at this moment, there are 40 to 45 thousand troops. ITBP has also increased its strength. By contrast, China has also deployed a number of almost 30000-35000 thousand armies. In the North of Pangong Lake, China has also brought 1500 troops and built concrete bunkers. According to Diptendra Singh Hooda, ‘Frankly speaking, China has forcibly changed the LAC in the North of Pangong. They have built the outpost according to their own ideas. Actually, the biggest challenge is to force China to return to its previous position.’ Moreover, it is crystal clear from China’s recent demands that the Chinese are planning to push back the actual LOC near Pangong Lake to Finger Two. It is clear from a satellite image that China does not intend to leave the occupied territories. Satellite imagery shows a giant map of China is drawn between Finger Four and Five on the shores of Pangong Lake. At the same time, like the Galwan Valley, multiple temporary camps have been set up between Finger Four to Six. Efforts to build a helipad are also underway.

According to the news media, even after repeated discussions or dialogues, China is now adamant in its position; naturally, no solution formula has been matched yet. It is not possible to cut the tangle of Sino –Indian border clash yet. The two sides met at the Chusul-Moldo border in Eastern Ladakh. But the solution formula to get rid of this border tension was not found as per the Army sources. When India asked China to give up its occupied territories in Pangong and Galwan valleys, China, by contrast, pressed for a reduction of the Indian Army in the East Ladakh region. All in all, the stalemate at the border has not ended yet. For now, it seems like a long drawn process to find out a solution formula.

‘The United States and its allies have long wanted Indians to help in confronting China. Now a deadly border clash seems likely to push India in that direction.’ With the Indian government issuing ban on 59 Chinese mobile phone Apps and Indian telecom being asked by the government to avoid using Chinese equipment especially from Huawei, are we really gearing up for a decisive confrontation with China?   But according to the experts, and overall war between China and India is unlikely, since China and India are both nuclear powers (nuclear deterrence). The current internal socio-political and economic situation in China is not very favourable for many reasons. Moreover, the Chinese Government has been criticized in the country and internationally for spreading the Corona Virus. Critics allege that China has embarked on this adventurous expedition to divert the attention of the people from all these criticisms.