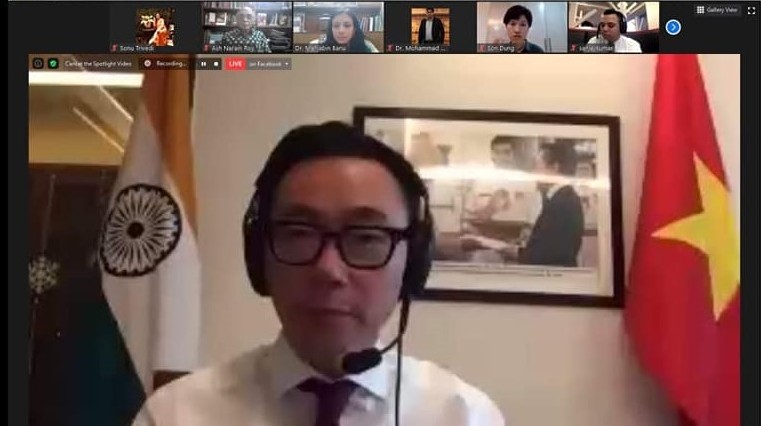 “During our history, we have extended mutual support to each other…(we) have been able to benefit from the support from Indian people and government not only during our struggle for national independence and reunification but also national construction”, said H.E. Mr. Pham Sanh Chau, Ambassador of the Socialist Republic of Vietnam to India. Ambassador Chau was delivering the inaugural address at the International Symposium on “Public Diplomacy and India-Vietnam Engagements”, organised by the Society for Public Research and Empowerment (SPRE), New Delhi, India in collaboration with Centre for Vietnam Studies (CVS), New Delhi, and the Embassy of the Socialist Republic of Vietnam in India. The event was organised via video conference on June 12, 2020.

Ambassador Chau discussed the Vietnamese perspective on public diplomacy and appreciated the importance given by the Indian government to public diplomacy initiatives. He said that diplomacy had three major tenets in Vietnam which included political diplomacy, economic diplomacy and cultural diplomacy. Through cultural diplomacy, the primary task was to take care of the Vietnamese residing abroad, he said. He reminded the participants that President Ho Chi Minh had laid the foundation of “Hand to Hand” diplomacy, which helped in winning the hearts of foreigners. He maintained that Vietnam won the war against the United States by winning public opinion in Washington. He reiterated the significance of public diplomacy and said that the India Study Centre and the Ho Chi Minh Academy can be important institutions to support public diplomacy initiatives between the two countries. He also spoke of the growth of Voice of Vietnam radio. Ambassador Chau also specifically mentioned the significance of direct flights between Vietnam and India and said that it will help in increasing people-to-people contact.

Prior to the inaugural address, Dr. Mahjabin Banu, President, SRPE and Visiting Fellow at the Centre for Vietnam Studies in New Delhi, who moderated this symposium, delivered the opening remarks. She said that public diplomacy is key to managing bilateral relations between India and Vietnam as it helps in promoting inter-cultural understanding. Dr. Banu maintained that this ongoing pandemic has provided an opportunity to engage in a larger Track II dialogues which can also be made possible through technological applications and video conferencing. She asserted that public diplomacy initiatives and geo-cultural cooperation among India, ASEAN and the Mekong-Ganga Cooperation will deepen the integration. This is also very crucial when it comes to Vietnam, she added. Dr. Banu called for a concerted effort toward enriching public diplomacy initiatives between the two countries and argued that it can redefine the nature of our bilateral economic and strategic relations as well.

Dr. Ash Narain Roy, Chief Patron of the Centre for Vietnam Studies delivered the welcome address. He congratulated Vietnam on its successful handling of the Covid-19 pandemic despite sharing a border with China. He praised the accountability of the government of Vietnam. While expressing his thoughts on public diplomacy, Dr. Roy emphasized on the importance of the cultural aspects. He spoke about the success of German Institutes, Confucian Centers and the British Councils. In terms of public diplomacy, he maintained that what matters is what you are and not who you are. In his concluding remarks, he commended the fact that both India and Vietnam have to walk shoulder to shoulder in deepening cooperation between them. Dr. Roy also reminded the participants of the geographical importance of the Indo-Pacific and how India has remained an anchor in the region.

Dr. G. B. Harisha, Director of the Swami Vivekananda Cultural Centre at the Embassy of India in Hanoi delivered a special address. He threw light on the recent discovery of Shiva Linga in the Cham Temple complex. Dr. Harisha also discussed the deep cultural relationship between India and Vietnam. He further spoke about the respect given to Swami Vivekananda Centre in Hanoi and also about the recently installed statue of Mahatma Gandhi in Hanoi. He said that although other ASEAN countries are known for deeper ancient ties with India, the most ancient inscriptions are found in Hanoi. He highlighted that about 2000 years back, Indian monks brought Buddhism to Vietnam. He reminded the participants about the significance of the International Day of Yoga and said that it is celebrated at a very artistic level in Vietnam.

The symposium included three distinguished panels catering to three distinct sub-themes. Each of these panels included two experts – one each from India and Vietnam. The three-panel sub-themes included the following: instruments of public diplomacy; public diplomacy as a means of strengthening India-Vietnam ties; and, India-Vietnam cooperation in the emerging geopolitics of a post-covid world

Dr. Rajan Sudesh Ratna, Economic Affairs Officer at United Nations Economic and Social Commission for Asia and the Pacific in New Delhi spoke on the first sub-theme of instruments of public diplomacy. He began by comparing the imperial struggles of both India and Vietnam. Dr. Ratna then spoke about how India had granted Vietnam the Most Favored Nation (MFN) status in 1975, even before Vietnam joined the World Trade Organisation (WTO). He added that soon after granting the MFN status, India then went on to sign a trade agreement with Vietnam in 1978. Dr. Ratna spoke of the deep economic ties between India and Vietnam by stating facts that included India being the 7th largest trading partner of Vietnam and Vietnam being India’s 3rd largest trading partner in ASEAN and 14th largest trading partner globally. He also emphasized on how Indian generic drugs being the cheapest can help Vietnam. Dr. Ratna also stressed on the importance of science and technology as a means of connection between the two nations given that Indian software is globally recognized, and Vietnam also has gained due competitiveness in science and technology.

Ms. M. A. Hoang Manh, the next speaker, represented the Ministry of Foreign Affairs of the Government of Vietnam. She spoke of an article she had written on ‘What does Vietnam share to the world?’. She said the answer lay in the UNESCO heritage and national parks, and not just coffee. She highlighted the 4000 years of history of Vietnam. Ms. Manh stressed that the most important purpose of public diplomacy is to connect and make people understand about Vietnam. She said that media can play a pivotal role in doing so. She informed the participants that the Voice of Vietnam, as mentioned by Ambassador Chau as well, has 24 channels and it can be an important instrument to promote Vietnam. She spoke of two proposals to help improve public diplomacy between India and Vietnam. One, she said, is to publish more and more articles in the newspapers carrying positive information about India as information about India was limited in Vietnam. Secondly, she called for publishing information about Vietnam in the English language to promote Vietnam among the Indian audience.

Dr. Faisal Ahmed, Associate Professor at FORE School of Management in New Delhi, while speaking on public diplomacy as a means of strengthening India-Vietnam ties, described public diplomacy as a tool to reposition the image of a country in mind of the people of other countries. He talked about popular geopolitics and maintained that Vietnam has created an excellent regional and global image as a supporter of peace and humanitarian values. Discussing cultural cooperation, he mentioned that the two sides have jointly created Indo-Vietnam Film and Cultural Forum which strengthens public diplomacy initiatives. He recommended that this cultural forum should undertake initiatives to organise film festivals, fashion shows, broadcasting of films, and should also print an India-Vietnam Film Magazine to depict each other’s real and reel life. He spoke about the need for mass connect amongst the youths, and across communities in both countries. Dr. Ahmed called for allocating more policy space to public diplomacy for leveraging its benefits in economic and strategic arenas as well.

Dr. Le Thi Hang Nga from the Vietnam Academy of Social Sciences in Hanoi was the next speaker. She explained the five elements of public diplomacy viz. listening, advocacy, cultural diplomacy, exchange diplomacy and international broadcasting. She said the most important aspect was cultural diplomacy between Vietnam and India. She spoke of how well India has promoted cultural diplomacy by stating that thirty-seven cultural centers have been maintained by the Indian Council for Cultural Relations, and sculptures of Mahatma Gandhi have been established in forty countries on his 150th birth anniversary. Dr. Nga maintained that the most unique feature of Indian diplomacy can be domestic outreach, and emphasized that the North-East region of India is significant for the success of India’s Act East Policy. She mentioned the newsletter started by the Indian Embassy in Vietnam which is published in Vietnamese and spoke of the need for a similar newsletter in India by the Vietnamese Embassy.

The last panel focused on the sub-theme of India-Vietnam cooperation in the emerging geopolitics of a post-COVID world. Prof. G. Jayachandra Reddy, Director of the Centre for Southeast Asian and Pacific Studies at Sri Venkateswara University in Tirupati began his talk with the Covid-19 pandemic situation. He said that Covid-19 is very different from all the previous pandemics – the one difference being on the impact on developed economies. He then discussed the geopolitical blame game that began following the Covid-19 outbreak. He raised the question as to whether the virus was a coincidence or a planted tool and whether the information was hidden and to what extent. He described how the United States has been targeting China and the World Health Organisation (WHO), and also how the European Union is supporting the resolution for enquiry. He expects that there would be a re-polarization of the world order with the growing relevance of geopolitics. He also emphasized that India and Vietnam shall be emerging as extremely competitive hubs in the long-run.

Further, Dr. Do Thu Ha, Professor at the Vietnam National University in Hanoi, spoke about borders becoming much more blurred due to globalization. She reiterated the shift in power being brought forward by this pandemic. She maintained that Covid-19 is here to stay, and it is the time we reconsider our mobility, supply chains, relationships, etc. in accordance with this new scenario. Dr. Ha concluded by drawing attention to the impact of Covid-19. It is not to be underestimated and global order dynamics are expected to be hugely different from the pre-COVID world, she added.

The event received immense knowledge support and cooperation from Dr. Sonu Trivedi, Director of the Swami Vivekananda Cultural Centre at the Embassy of India in Seoul; and, Dr. Manish Kumar, Officiating Director of the Centre for Vietnam Studies in New Delhi. It included active participation from speakers and delegates representing India, Vietnam, Thailand, the Philippines, South Korea, Russia, and Switzerland. Toward the end, the forum was opened for Q&A. The Rapporteuring of the event was done by Mr. Mohammad Yusuf Khan. The event concluded with a vote of thanks.