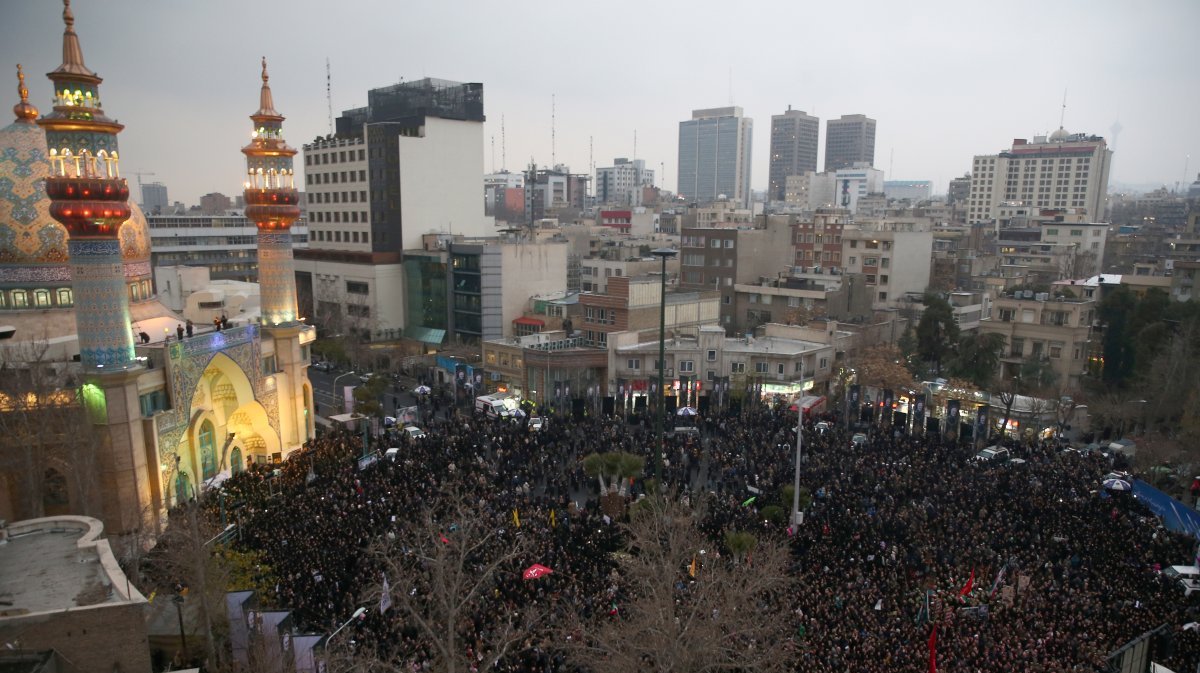 At the height of U.S.-Iranian tensions following the targeted killing of General Qasem Soleimani in January, President Donald Trump declared that in the event of further attacks by Tehran or its proxies, he had chosen 52 targets for the U.S. reply—among them cultural sites.  The remarks were met by widespread public outrage and denials by his own senior officials that attacking cultural heritage sites was under consideration.  Trump himself seemed to walk back the threat three days later, noting that such targeting would be illegal and that he “likes to obey the law.”

The assassination of Soleimani—a key terrorist planner–along with a prominent Iran-backed Iraqi Shi’ite militia leader, Abu Mahdi al-Muhandis, by an American missile as they left Baghdad Airport prompted a brief direct military confrontation between the U.S. and Iran.  It has also seriously hindered the activities of Iran’s network of proxies in the region, which the savvy, charismatic Soleimani had built up in the region over decades.  It thus will arguably make Americans (and millions of mostly Sunni Muslims) safer.  However, the mistaken notion of targeting cultural sites, if implemented, could quickly reverse all these gains, or worse.

The controversy arose after Trump twice tweeted to that would order the targeting of cultural sites in response to Iranian reprisals over the death of Soleimani.  At a 7 January meeting with Greek Prime Minister Kyriakos Mitsotakis, Trump seemed to back down, saying that if the law forbade attacks on cultural sites, “It’s okay with me.”  Yet he still complained about having to protect them while Iran killed Americans, raising doubts about his resolve to do so.

Trump’s unconvincing volte-face came not really in response to widespread media criticism of the threats, but to comments by Defense Secretary of Mark Esper and Secretary of State Mike Pompeo earlier on 7 January, that the U.S. would abide by the law with regard to cultural sites.  This raised the prospect of an actual constitutional crisis between POTUS and major agencies of government, including the military leadership, that would dwarf his fruitless trial in the U.S. Senate on factually-proven articles of impeachment passed by the House of Representatives.

The anger over the threat to cultural sites also led to the proposal of a Senate resolution condemning it that was defeated on 7 January.  As one of its sponsors, Sen. Ed Markey (D-Mass) posted about it on his office website, such targeting is forbidden under international law:

“The resolution highlights that Article 53 of Protocol I to the Geneva Conventions prohibits any act of hostility against cultural objects, that the destruction of cultural sites violates the 1954 Hague Convention for the Protection of Cultural Property in the Event of Armed Conflict, and the Department of Defense Law of War Manual states that ‘[c]ultural property, the areas immediately surrounding it, and appliances in use for its protection should be safeguarded and respected.’”

The controversy also helped provoke a successful, bipartisan resolution to prevent military action against Iran under the War Powers Act in the Senate on 13 February—and a similar one in the House.  Though toothless in themselves, the rising sentiment to restrict Trump’s and any future president’s military options may prove dangerous, if a quick, massive response is needed in a crisis.

The broad opposition underscores that Trump crossed a line on which there is nearly universal bipartisan consensus – Islamists and other barbarians attack cultural sites, Americans do not.   On the contrary, the U.S. has a strong tradition of acting to protect cultural sites during times of war.  In World War II, President Franklin Roosevelt personally authorized the creation of a special military unit – later dubbed the Monuments Men (as celebrated in the eponymous George Clooney film) to safeguard key cultural sites and Nazi-looted artworks in Europe, including those of Axis countries.

The U.S. military’s efforts to protect cultural sites in war zones go well beyond its obligations not to harm them under the Geneva Conventions, the 1954 Hague Convention for the Protection of Cultural Property in the Event of Armed Conflict, and the Department of Defense Law of War Manual, which states that ‘[c]ultural property, the areas immediately surrounding it, and appliances in use for its protection should be safeguarded and respected.”

In the 1991 Gulf War to liberate Kuwait from Iraqi occupation, U.S. military commanders met with numerous experts on archaeological and other heritage sites to learn to recognize and protect these places, which are part of the patrimony of all mankind.  For years afterward the U.S. government and other institutions expended serious efforts to recover some 2,000 key objects stolen during the conflict.  Sadly, only a few were recovered by the time of the 2003 U.S.-led invasion of Iraq.   Following largely unfair criticism of the failure to protect the nation’s libraries and museums–some of which were looted, even burned—in that war, the U.S.-installed Coalition Provisional Authority (CPA) set about organizing efforts not only to protect these places, but to recover and restore lost, stolen and damaged artifacts as well as library and archival collections.

Indeed, much of our foreign aid in the region (including, for example, in Egypt, where I have seen much of it firsthand) is aimed at preserving and restoring historic mosques, churches and other monuments as not only good public relations, but to save mankind’s common memory.  There was even a special programme to rescue the endangered cultural and sacred artifacts of the formerly large community of Iraqi Jews, who were often violently pressurised to leave the country, and their property, in the 1940s and 1950s.

For a week in February 2004, I returned to Iraq—which I had visited and traveled extensively within several times in the late 1980s—and conducted my own personal survey of the damage done by mobs, in the unexpected collapse of civil order, to libraries, museums, and manuscript collections.  It had been widely reported virtually everything had been destroyed, but my own investigation revealed that likely about 15-to-30 percent of museum, library and other documentary collections had been lost, at least in the Baghdad area.

This involved interviews with numerous Iraqi and American experts and many visits to these institutions, roving the city unarmed in an open car with a local driver (provided by relatives of the Iraqi couple–exiles once closely tied to Saddam Hussein, but later his enemies–with whom I had returned), as frequent firefights, kidnappings and explosions erupted in the neighborhoods around us, sometimes quite close.  The greatest losses, which for security reasons I could not verify with personal visits, were at archaeological sites—which I was told by staff members at Iraq’s national museum in Baghdad and others had been systematically looted through corrupt arrangements allegedly made by Saddam’s own family for the past decade, and which continued after his toppling.

As noted, there had been anger at the failure of American forces to prevent this damage.  Yet no one would logically anticipate that one of the most efficient and all-pervasive central governments in the region would simply collapse completely–which it did in one day.

The most infamous incident was the looting of the Iraq Museum in Baghdad, in which the absence of American protection was attacked in the press as a scandalous dereliction of duty.  Yet from conversations with the museum staff, I discovered that a unit of American troops, equipped with at least one tank, had in fact come to the roundabout next to the museum in order to guard it early in this period.

They had been withdrawn apparently after a firefight with a group of Fedayeen Saddam guerrillas who had taken over the museum, one of whose gunmen, I was told, they had blown from a faux-Assyrian pylon at the entrance, as evidently attested by a large shell hole bored over the arched gateway.  (In subsequent photos, the brickwork patch still shows.)  In other words, it seems they had not abandoned a defenseless institution, as widely reported, but had retreated from one occupied by enemy fighters.  A little over a week later, American forces returned to secure the museum and grounds. (What I heard from the museum staff sounds remarkably similar to the reported account of Lt. Col. Eric Schwartz to the actions taken by his own unit of the U.S. Third Infantry Division on the night of 9 April 2003).

Worst Cultural Destruction Wrought by IS:

But the most severe wreckage to Iraq’s amazing cultural heritage was not done then, or even during the long and bloody insurgency that followed the 2003 invasion.  Rather it was during the four-year occupation (2014-2018), of much of western and northwestern Iraq by the Islamic State, which systematically blew up or otherwise liquidated everything from the remains of the ancient city of Nimrod in Ninawa (Nineveh) Province, to medieval mosques and churches, to the antiquities museum in Mosul and numerous libraries and document collections. This is not to mention the murder and enslavement of the already-much reduced Christian, Yazidi and other religious minorities whom IS deems heretical—the greatest act of cultural destruction of all.

Our ongoing war to liberate Iraq from the scourge of IS—thousands of whose fighters remain in the country and in neighboring Syria–has done more to provide hope for the eventual restoration of some key Iraqi cultural sites—mosques, churches, monasteries and others–as now undertaken by bodies such as the University of Pennsylvania Museum.  According to Dr. Richard Zettler at the museum, with whom I spoke on 21 February, the project does not cover archaeological sites, but is restricted to other cultural monuments.

Dr. Zettler notes that the U.S. Agency for International Development in northern Iraq is restoring the al-Nuri Mosque in Mosul–where the late Abu Bakr al-Baghdadi declared the existence of the now-defunct IS caliphate in July 2014—which was blown up by his fighters as they retreated from the city in 2018.  In addition, the U.S. Army, in partnership with the Smithsonian Institution in Washington, D.C.,  have lately established a new organisation, the Cultural Heritage Task Force, to protect sites and artifacts ravaged in the ongoing wars.

Maintaining America’s tradition of respect for cultural heritage sites is especially crucial in confronting the Islamic Republic of Iran, which now may be edging toward regime change from within.  The wave of mass protests that soon arose against the Iranian government for its initial coverup of the accidental downing of a Ukrainian airliner in January, which called for the death of Supreme Leader Ali Khamenei and an end to war against America and Israel, would have been difficult to imagine had the U.S. military set out to deliberately destroy monuments revered by all Iranians.

Raymond Stock
Author is a Writing Fellow at the Middle East Forum and instructor of Arabic at Louisiana State University, is writing a biography of Egyptian Nobel laureate in literature Naguib Mahfouz (1911-2006), many of whose works he has translated, for Farrar, Straus & Giroux. He is currently translating a novel by Egyptian-American author Sherif Meleka, with the working title of Suleiman’s Ring, for The American University in Cairo Press.
Tags:
Trump Iran United States Qasem Soleimani Ali Khamenei
Share:
Share this...

2 replies on “Targeting Cultural Sites is the Worst Revenge”