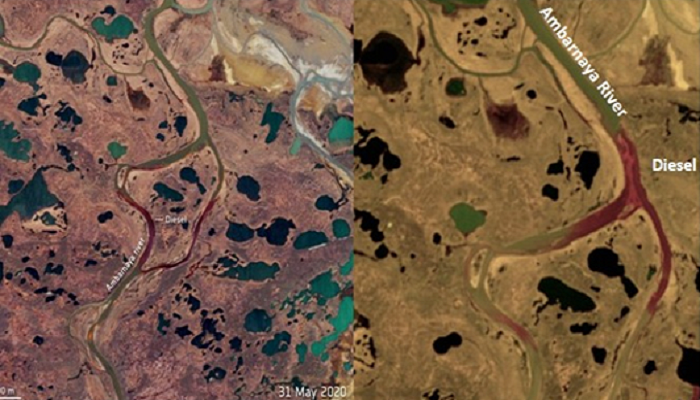 On the 29th of May 2020, European Space Agency (ESA) satellite images reported a Diesel Oil leak from Norilsk Nickel power plant subsidiary in Arctic Russia. Since then a flurry of action on ground and online have hit the information circles on the otherwise isolated town of Norilsk. It is a northernmost city located above the Arctic circle, east of the Yenisei River, south of the Taymyr peninsula. The Norilsk Talnakh mineral deposits are said to be the largest nickel deposits in the world. The deposits have been created by Siberian Traps which is an igneous rock bed formed by the volcanic eruption and spread of lava. The population of the city is around a hundred and eighty thousand. It is considered an industrial town because of the presence of mining industries that are the mainstay of the economy. A large part of its economic activity is attributed to mineral mining.

The MMC Norilsk Nickel, a company known to be the largest producer of nickel in the world, has been active in the region since the nineties. The recent accident occurred when the Norilsk Tamyr Energy fuel storage tank collapsed and is said to have spilled over twenty thousand tons of diesel oil in the neighboring region, especially the Ambarnaya river. The ESA image created by their scientists after specially processing the Sentinel-2 data shows river Ambarnaya and its banks becoming ‘red’ Figures 1Source: ESA (Sentinel-2 Image) | ESA Team, 6th June 2020. Figure 2 (Source: ESA Image | Author) shows the flow of the Oil on 1st June 2020 moving in the northward direction.  The diesel in this case was dyed red, to classify and segregate its use for particular tasks. Hence when this diesel spilled it turned river red.

The all-too-well known environmental dangers from this contaminant material spill is not a recent phenomenon. There were reports of chemical leaking into the river and neighboring small water bodies in 2016, Figure 3. In 2016, the river Daldykan turned red due to leaking materials that contaminated the river water. The National Geographic came out with an article (among others) in 2016 and raised important questions towards the reddening of the rivers and the possibility of the chemicals being leaked into the adjoining areas and these rivers. Though at that time it was also speculated that heavy iron content from the ground gave rise to red color in the river. The published reports at the time put pressure on Norilsk Nickel and it subsequently admitted to leakage from a dike at the Nadhezda plant that caused overflowing of contaminants into the river, making it red, Figure 3.

During the 2016 chemical leakage, the source of the river turning red was not immediately accounted for, unlike the stated fuel spill in May this year, where the attribution to red-colored diesel has been immediately made. The additional reason for the massive amount of leakage this year has also been attributed to the melting of Permafrost. Though this may be true because a whole storage facility is said to have collapsed, the ‘red’ coloring of rivers in the region can be seen as back as 2016 (Figure 3) and 2010 (Figure 5), it does not address the issue completely. This has also been reflected in the strong stance taken by Russian authorities in holding the responsible actors accountable and liable for legal action if found guilty, even if permafrost was found to be the reason for the collapse of the structure. It is possible that the spread of diesel and other chemicals at the site may have occurred, (seen through the satellite images), due to unintended leakage for the lack of required maintenance and upkeep.

A similar investigation was ordered in 2016 but failed to eradicate the issue. According to a Guardian article on the 7th of September 2016, the management were initially in denial and had termed the coloring of the river ‘red’ as normal. In the same report, a researcher studying pollution from Vernadsky Institute for Geochemistry and Analytical Chemistry laid the source of the problem to the pumping of chemical solutions from and to the Nadezhda plants through DAM pipes that occasionally crack. If this is true, then satellite images suggest the reddening of the rivers as a phenomenon as early as 1999 (image not included here).

Unlike last time (2016), the Russian authorities declared the accident as a matter of state emergency on the 3rd of June 2020. Ever since, reportedly, massive cleaning exercises have been undertaken. By the 4th of June 3000 liters of oil spill had been removed, however, strong winds in the region was known to be creating delays for total clean-up of the spread. It has been reported that spread has been curtailed, however, it is not clear if the entire areas has been cleaned. While various methods like in situ burning, using dispersants, exist to mitigate the spill, Russia is using the booming process, to collect the Oil and then dissipate it later. Booms are floating barriers that physically collect oil skimmed from the surface and can be disposed of in containments later. It seems to be the most environmentally-friendly choice.

The recovery from the potential damage to the region would be insurmountable if such leaks into the ground and water are not checked with raised alacrity. Apart from external environmental damages that may occur – fire hazards, contamination of groundwater, the effect on soil composition, air pollution, loss to flora & fauna near the aquatic habitat, it has the potential to impact human lives. 6000 liters of fuel is said to have seeped in the ground that will take decades to rectify, according to State Fish Authorities. If spillover reaches the open seas, then the damage is much more protracted to the species in that environment. Long-lasting effects may manifest in humans and animals as well. The World Wildlife Fund (WWF) has called the accident the second largest in modern Russian history. Greenpeace has compared it to the 1989 Exxon Valdez oil spill off the coast of Alaska. WWF Russia has also stated that the oil may have reached Lake Pyasino in the north.

Given that the Arctic is becoming a contested zone for resources, especially for minerals, such accidents might raise contentions among participating interests, since the pollution can have a reaching effect geographically. As global warming percolates the melting ice to various constructions in the region that have high industrial produce and waste, timely identification and prevention of such sites globally would reduce damaging environmental effects.