Widening G7: Are Democracies Allying Together? 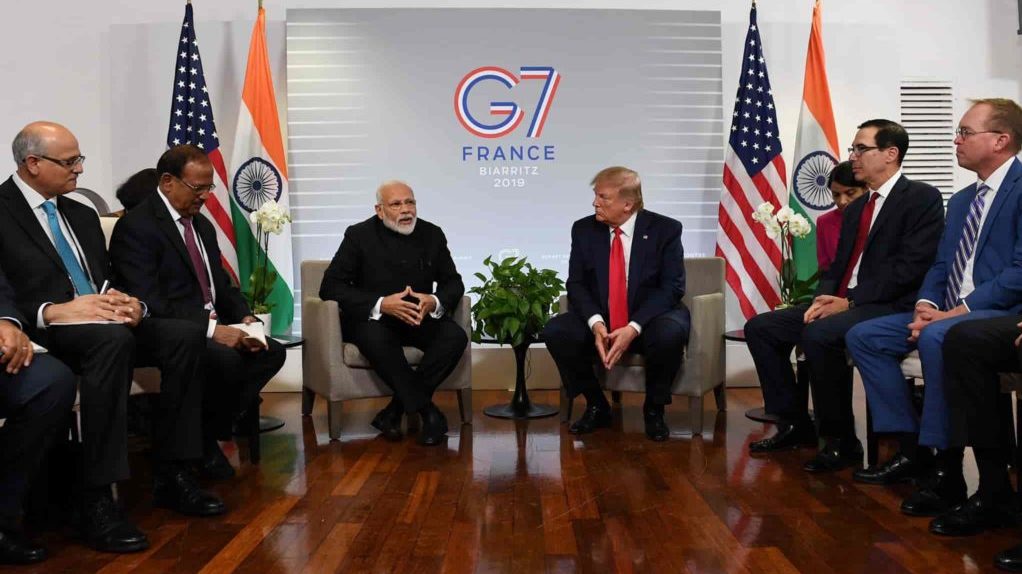 During a recent telephone conversation between US President Trump and Indian PM Narendra Modi, POTUS expressed a desire to expand the ambit of the G7 and hence have invited India along with other countries to be a part of the grouping in the next G7 summit, to be held in the USA.

The G7 or ‘Group of Seven’ was authentically a ‘Group of Six’ initially in 1975, which included France, Italy, Japan, the United Kingdom, the United States, and West Germany but later in 1976, Canada became a part of the grouping resulting to the formation of G7. Eventually in 1998 Russia joined in the gathering and was called G8 but post-Crimea’s annexation, the democratic alliance excluded Moscow from the group. It is a grouping of the most industrialized countries all over the world and after the UNSC (United Nations Security Council) is the second most important gathering for discussing global issues regarding security, economy, and energy.

As soon as the recent call was taken by POTUS, have created a dilemma that whether G7 is transforming itself by involving developing and middle-income countries together? Along with India POTUS has also invited Australia, South Korea, and astonishingly Russia again analysing its strategic importance in the changing world order with an intention of keeping it far from Beijing.

Importance of India in the modern world

Considering the importance of India which has its global contributions in sectors like renewable energy, pharmaceutical medicines, steel manufacturing, etc. and its presence in the Indian Ocean has boosted up its strategic relevance in the region as well as over the world. Is there something else that India holds more value that has brought it in the cynosure?

Yes, it is the huge market that it holds and the intentions of the Indian government to invite massive foreign investments have brought a massive opportunity for foreign investors and manufacturing companies. The $3 trillion economy is the 3rd largest economy when calculated on (PPP) basis and the 5th largest economy when ranked by nominal GDP. The country is the fastest growing economy in the world. Ignoring India and other such growing economies have made POTUS rethink the current G7 structure which makes it outdated.

Union forming Against the Dragon

While Russia has accepted the invitation by the US president along with a condition of equal participation and yet has whispered the ignorance of China in the important group which is expanding, despite Beijing previously having been a part of G8+5. China being the second-largest economy and its growing ambitions over the world with respect to its BRI project makes the few feel optimistic but it’s for sure that Washington is glaring at it with a threat over its hegemony. Re-arrangement of the 1976 grouping is being seen as a result of the expanding Chinese ambitions, its non-transparent behaviour amid a pandemic and its naval dominance in the maritime regions.

Though this new bloc being created should not set its agenda as Anti-Chinese but bring back Beijing under the global, institutional-based world order i.e. to make China realize the value of discipline-based existence without exploiting the smaller nations to fulfil “CHINA DREAM” or “CPEC” passing from POK and recent activities of intrusion in Ladakh despite New Delhi being holding a claim over the disputed region. Beijing ought to get over its old strategy of “DEBT TRAPPING” against small and economically weaker nations.

The current pandemic has definitely brought a new opportunity for each and every country to get back on track and revitalize their circumstances being faced since the past. As regards USA which is moving ahead towards its presidential election in the month of November is uncertain about the re-election of Mr Trump, but no one can forget the unilateral decisions that POTUS has taken every moment keeping ahead the slogan “AMERICA FIRST” or promoting protectionism against globalization is quite similar to Xi administration policies depicting “CHINA FIRST”. The USA will have to rethink its past decisions and should progress ahead with multilateral dialogues. The US administration should consider its allies before taking universally bothered decisions instead of facilitating it unilaterally.

Experiencing from the past actions of the USA like moving out from “Climate Change Mitigation Agreement” or “Withdrawal from JCPOA” would make other countries to think twice before getting allied and these points should be given thought upon by the POTUS with a further expectation demanding global support against China’s unilateralism.

If the vision of the new G10 or G11(Indonesia may be invited in the new formation of G7) becomes a reality, then it would look like an altered version of G20 yet with great importance. The next summit would be the second time that India under the leadership of PM Modi would show its presence. Last year French President Emanuel Macron had invited PM Modi to the summit. Prior to this PM Manmohan Singh had represented India in five successive G8 summits. Primarily, a seat at the ‘high table’ for India would be a great platform to keep its foreign policy and security concerned interests as well as for its backing to confirm a permanent seat in UNSC along with a global consensus for its inclusion in the nuclear club. India’s dominance in the Indian Ocean would also get a global agreement to promote free trade in the region.

The affirmed mouthpiece of Chinese government ‘Global Times’ have lately warned India to refrain from getting into a proposed invitation in the G7 summit claiming it to be a “small circle that perceives China as an imaginary enemy”. Unlike a ping pong ball, being hit from both the sides, New Delhi should take a pragmatic decision before allying with any of the bodies or nations. It should keep its neighbouring policies under consideration, as we see the ongoing tussle between India and China near LAC may have some undesired repercussions post-pro-G7 resolution, though firm decisions are always welcomed keeping India’s interest ahead.