India-Australia: Strategic Partners in the Indo-Pacific 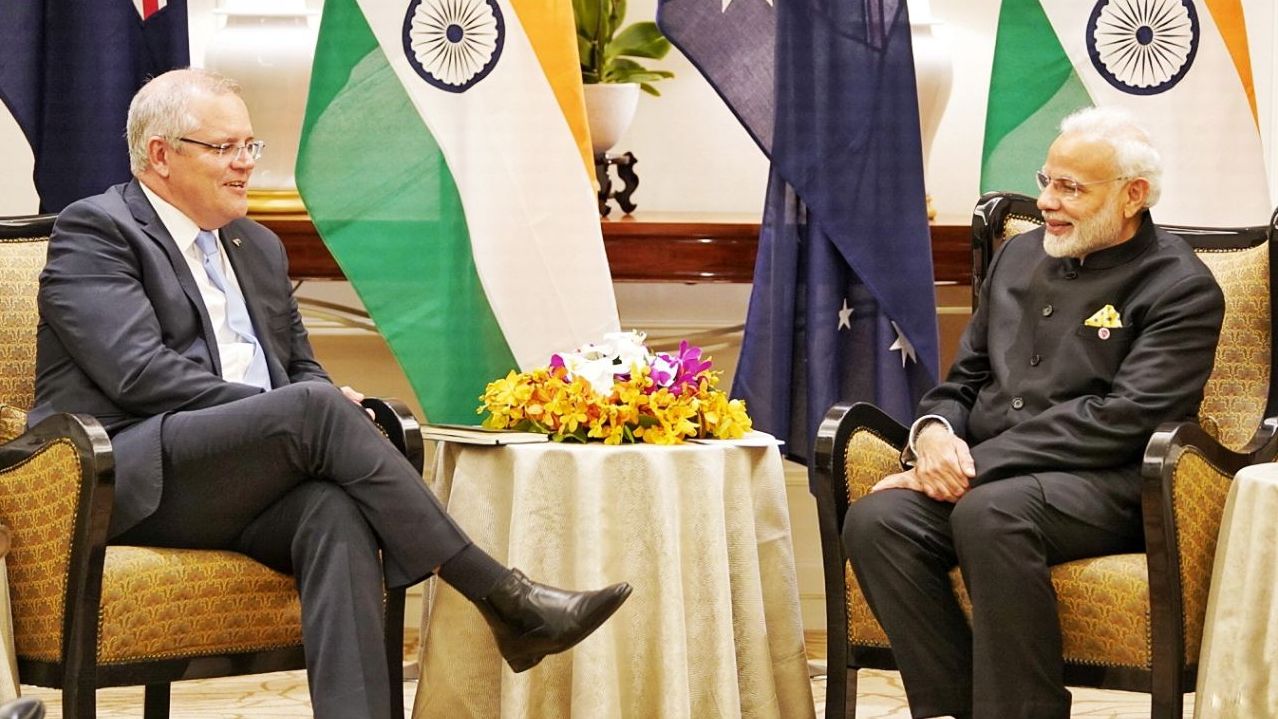 The ‘India-Australia Leaders’ Summit’ was held virtually on 4 June 2020 attended by the Indian Prime Ministers Narendra Modi and his Australian counterpart Scott Morrison. The summit was earlier scheduled to be held in January this year but was postponed as the Australian Prime Minister could not visit India due to the domestic crisis of bushfire in the country. Later as the COVID-19 pandemic spread across the world disrupting the normal life, the two sides decided to host summit virtually. Since the COVID-19 outbreak, India has been focusing on virtual diplomacy by reaching out to countries through video and teleconferencing, taking a lead in hosting special virtual SAARC summit and participating in the virtual G20 summit. However, the Modi-Morrison summit was the first ‘bilateral virtual summit’ which India hosted. The bilateral summit provided an opportunity for the two leaders to review the broad framework of bilateral ties that have made significant strides in recent years. At the summit, both countries agreed to elevate the bilateral relationship from Strategic Partnership to a ‘Comprehensive Strategic Partnership’ (CSP) based on “mutual understanding, trust, common interests and the shared values of democracy and rule of law”.

India and Australia are the two significant players in the Indo-Pacific region, with a shared vision for a ‘free, open and inclusive’ region. The Australian High Commissioner to India, Barry O Farrell, highlighting the key areas of discussion and cooperation said that “the 4D’s i.e. democracy, defence, diaspora and dosti” have deepened the partnership between the two countries”.

Defence and security cooperation between the two countries have progressed significantly over the years. A much-awaited agreement on ‘Arrangement concerning Mutual Logistics Support (MLSA)’ was signed during the summit which will boost defence cooperation between the two countries by enhancing military interoperability, allowing access to each other’s military bases for logistics supports.

Maritime cooperation is a priority area for India and Australia in the overall bilateral relationship. Being the two major stakeholders in the region, with their strategic location and geographical proximity of a common Ocean, converging economic and strategic interests, shared values and significant naval presence, India and Australia have a common interest in maintaining good order at sea, vital for durable peace and stability in the region. Recognising that “many of the future challenges are likely to occur in, and emanate from the maritime domain”, a crucial Joint Declaration on a Shared Vision for Maritime Cooperation in the Indo-Pacific was announced during the summit, emphasising the shared interest of both countries in a free, stable, secure and rules-based maritime order.

Given their shared interest in the safety and security of critical sea-lanes in the Indo-Pacific, the two countries have been conducting bilateral naval exercises since 2015, which has become more intense over the years. In addition, the Indian and Australian Navies also participate regularly in the multilateral engagement including the Milan exercises, Indian Ocean Naval Symposium (IONS) and Western Pacific Naval Symposium (WPNS). Both countries have played a crucial role in reinvigorating the Indian Ocean Rim Association (IORA) and continue to engage deeply in the institution along with other member countries. India and Australia have reiterated on various occasions their support for ASEAN centrality in the region and have welcomed the ASEAN Indo-Pacific Outlook. Australia has also expressed its willingness to engage with India along other interested regional players to support India’s Indo-Pacific Ocean’s Initiative (IPOI) announced by PM Modi at the East Asia Summit (EAS) in 2019. Within the maritime sphere, therefore, focus areas of cooperation can include maritime domain awareness, maritime security, and connectivity, sustainable utilisation of ocean resources, disaster management and resilience.

The pandemic has accelerated the changes in global geopolitics including that of the Indo-Pacific region, which has already been in flux given the complex interplays among regional and global powers. The tension between the United States and China has amplified, as both are involved in mutual blame game on the issue of the virus. Amidst the pandemic, PLA navy’s actions in the South China Sea have caused tension in the Southeast Asian Countries. On the other hand, Australia and China have also been involved in ‘war of words’ over the issue of the virus, with Australia demanding an independent enquiry into the origin of the virus to which Beijing responded strongly threatening economic coercion. The bilateral summit also comes at a time when the situation is tense between India-China on the Line of Action (LAC) in Ladakh region. Under the current geopolitical context, it is important than ever to maintain open, inclusive, secure, multipolar order in the region and the world.

India and Australia and their engagement with other like-minded regional countries will play a significant role in determining the regional balance of power. The presence of both the countries in regional and multilateral platforms like the IORA, ASEAN Regional Forum (ARF), EAS, G20, Quad and a possible Quad Plus provides an opportunity to work towards the common vision.

On the economic front, the relationship between the two countries has been on an upswing in recent years. ‘An India Economic Strategy to 2035’ report released by the Australian Government, Department of Foreign Affairs and Trade in 2018 recognizes the enormous opportunities that the growing Indian economy, along with the huge labour force expected to cross over 1 billion by 2050, offers and needs to be leveraged by Australia. The two-way trade has significantly increased over the past few years. India also contributes significantly in terms of immigrants, tourists and students exchange to Australia. India’s growing economy offers a huge market for Australia mineral exports. An agreement on critical minerals signed on mining and processing critical minerals including antimony, cobalt, lithium and rare earth elements to explore new areas of cooperation. Although due to the pandemic economies are experiencing significant contractions with businesses are down, however, focus on economic cooperation will allow both the countries towards a sustained economic recovery. As Australia looks to reduce dependence on China and diversify its trade relations and the Indian economy offers significant opportunities.

Cybersecurity and critical technology is also one of the areas that the two countries are exploring to collaborate. A Framework agreement signed for Cyber and Cyber-Enabled Critical Technology Cooperation was signed during the summit. It will enhance the cooperative efforts in areas like enhance digital trade, harnessing critical technologies like robotics, artificial intelligence at the same time the two countries are also committed to work together to address challenges to the cybersecurity. The two sides also expressed willingness to cooperate and support scientific research in the area of public health.

Therefore, the virtual bilateral summit between India and Australia is historic in many ways. It provided an opportunity for both countries to review the bilateral relationship at the same time explore possibilities of cooperation in newer areas like public health, science and technology, cybersecurity alongside the traditional areas. Being the two important strategic partners in the region both countries along with cooperation with other regional players will play an important role in shaping a stable regional multipolar order at present and also post-COVID.