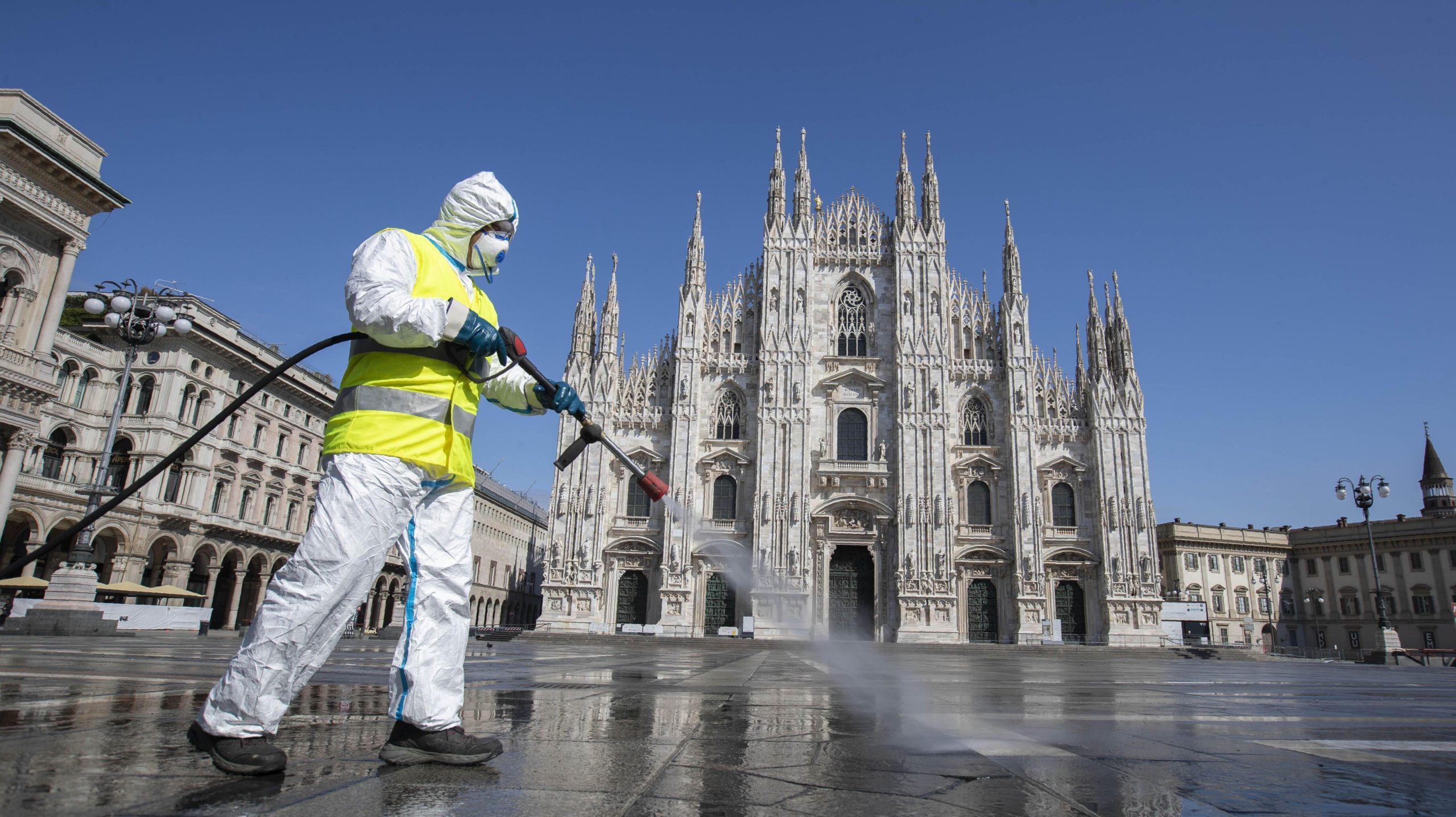 In recent years, the international community has become increasingly concerned with certain problems that are particularly difficult to identify, because they are infinitely more complex and less easy to solve than the threat posed by military conflicts to international security, pandemics, such as the current COVID-19 that has affected all countries without exception.

With this in mind, the EU has been one of the centres most affected by this COVID-19. A situation that has strained the existence of the EU and revealed the weakness of the risk management system in the face of such a threat, while the EU states isolate themselves and apply local management methods following the will of each State of the EU.

To answer those questions, it is interesting to assess succinctly the reaction of countries to the impact of the COVID-19, taking into account three criteria, the management of the health system, the political response and their financial response to the health crisis.

By their nature, these pandemic questions refer both to the balance of societies and the stability of states, they relate to a crossroads of issues, where economic, social, political and human questions arise.

The pandemic now threatens to curb globalization and increase Nationalism. One of the direct consequences of this pandemic the return to the central and rigid state, this form of national state under nationalist domination will undoubtedly contribute to the rivalry between the European States, and each of these states is concerned with preserving their previous state of power within the EU.

The logical question is whether the role of nation-states in the response to the coronavirus is equivalent to the decline of the global and supranational. When human life, threatened, returns to the centre of all things, the first reaction is to cling to what is known. We tend to look for references in the near and to distrust the foreign, diffuse and global.

The solution initially adopted by several EU countries when they observed the direct impact of COVID-19 particularly in Italy, where this virus caused from the beginning a feeling of fear due to the number of cases of deaths and the isolation of Italy due to the absence of effective solidarity, seems to be an attractive result for unconscious minds.

The example of Austria is eloquent in this regard. Austria was the first EU country to announce, on March 10, 2020, the introduction of drastic controls with its Italian neighbour, which was the first area most affected by the COVID-19 pandemic in Europe.

Each manager has their crisis communication. From the start of the pandemic, Angela Merkel, the German Chancellor took this seriously and alerted the population in an interview with the newspaper Bild: “It is a serious virus, it will infect 60 to 70% of the German population”.

In politics, as Machiavelli has already noted, the perception has always prevailed over reality: data reinforced in recent years by the proliferation of digital instruments and the possibilities of manipulation they offer. That is, the perception and image transmitted by the data give more weight to the action initiated by the competing States.

The European Union High Representative for Foreign Affairs and Security Josep Borell said on January 23, 2020, “We must be aware that there is a geopolitical component, including a struggle for influence and politics of generosity, he said. Armed with facts, we must defend Europe from its detractors”.

Josep Borrell comments run counter to the positive image of the Chinese, Russians and Cubans who have gained from international public opinion by bringing aid to Italy, while the EU states have all limited to their fate at the start of this tragic virus.

The Aid brought by various countries to the Italian state, one of the most abused by the COVID-19 pandemic, was abundantly transmitted in images, such as these fifty-two Cuban doctors and nurses sent by Havana, filmed in just landed on 22 March 2020, with the flag in one hand and the giant portrait of Fidel Castro in the other. “We must fulfil our revolutionary mission,” even one of them will say, quoted by Radio France Internationale (RFI).

China and Russia’s selfless “policy of generosity” in Italy has angered EU officials while helping in the fight against the COVID-19, Beijing and Moscow are using their networks to send propaganda messages. It is a kind of explanatory image of “the silk road of health”.

In this COVID-19 environment, the EU will try to provide a response of stability, cooperation and aid in financial and economic terms as the only way necessary to win the hearts of the European peoples.

The divide between the countries of the North and the South, which appeared during the eurozone debt crisis in 2010, re-emerges, while the leaders of the Twenty-Seven are concerned about their public opinions in the face of the consequences of the COVID-19.

The impact of the coronavirus in the EU countries is well established, as the underlying disagreements between northern and southern Europe are more evident in terms of economic solidarity. In the South, it is believed that we cannot emerge from the crisis without the creation of a “common debt instrument”. Such grouping of costs without controlling economic policies is always a red line for Northern countries.

Consequently, the world economy faces the greatest known challenge of the new era, that is, the current situation can be compared to that of the stock market crash of 1929. For example, the most demanding estimates of the impact of the pandemic on the Spanish economy, indicate that the fall in GDP may reach a percentage higher than 10 percent and the unemployment rate approaching 20 percent at the end of the current year.

The effects of the coronavirus after weeks of confinement are already being felt at the EU level. At first glance, awareness of the weakness of the health sector in different EU states to adapt to this pandemic phenomenon, led to a reflection on the links between the economic logic pursued by the EU states and the modification of the great planetary balances that condition the survival of humanity.

Since the European Commission presented its original proposal for a European budget backed by a large loan of 750 billion euros, European leaders have been floundering. They should have discussed it in Brussels at a European summit on June 19, but, at the request of certain member states, this summit is transformed into a simple videoconference.

This new fund is backed by the European multiannual budget project of around 1.100 billion euros for the period 2021-2027, reorganised by the Commission which expects a “historic” recession (-7.4% in 2020, followed by a + 6.1% rebound in 2021). In this context, of the 750 billion, 500 would be redistributed in the form of grants, which should not be reimbursed, an amount equivalent to that advanced in the Franco-German proposal. The rest will consist of loans to member states.

Among the most affected by the health crisis, Italy and Spain are taking the lion’s share, and could ultimately receive more than 172 and 140 billion euros respectively through this instrument.

The political measures taken imply a clear increase in the public deficit and indebtedness, which poses a serious problem of debt sustainability in the medium term, in addition to mortgaging public services and benefits for future generations. This increases the importance of European decisions to face the crisis. It is not only a question of solidarity but also, above all, of survival of the EU

Consequently, what emerges directly from this situation is the equation of European solidarity which is put to the test.

The coronavirus challenge the future of the European Union solidarity

In the early days of the European Community, public endorsement for the European integration project was strong. This phenomenon was commonly described as a “permissive consensus”. However, with the ratification of the Maastricht Treaty in 1991, public opinion towards the EU worsened and turned into “constraining dissensus”. But since the outbreak of the European financial crisis, populist anti-EU parties have gained increased support all over the EU and continued to be successful during the migrant crisis and the actual pandemic of coronavirus.

It should be noted that no community can survive without solidarity. Time will show whether support for solidarity actions also impacts Euroscepticism after the end of the European crises. Other aspects are expected to dominate attitudes towards the EU in less turbulent times.

Therefore, European solidarity matters more for citizens and generates greater opposition to the EU when it becomes costly for the member states of the European Union.

Whatever the turn of events to come, the current pandemic and its already felt consequences, question the internal order of the EU, due to the dispersion of power in the context of globalization, of the role of international institutions. And, above all, the supposed stabilizing effects of a hegemonic distribution of power with the other great powers, China, Russia and the United States. We are now witnessing a new order that is no longer Western but multi-polar, where the EU will be forced to rethink its internal and external policies.

At the end of the Thirty Years’ War, it was Richelieu and Louis XIV’s France who dominated the new Europe resulting from the Westphalian treaties. In 1815, after Waterloo, it was England who established herself as the mistress of the 19th century who started. And the two world wars will designate the United States as the hegemonic power of the 20th century.

Can we already speculate and say that the announced international economic order will be a non-transatlantic but more European Asian order?

Ali El Aallaoui
Author is an analyst and researcher in geopolitics based in El Aaiun Western Sahara. He got his PhD in International Law and International Relations in 2007 from the French Language University of Casablanca, Morocco.
Tags:
COVID-19 Corona Crisis Economic Slowdown European Union Spain Financial Crisis Europe Italy
Share:
Share this...