China’s Tango in the Icy Wilderness 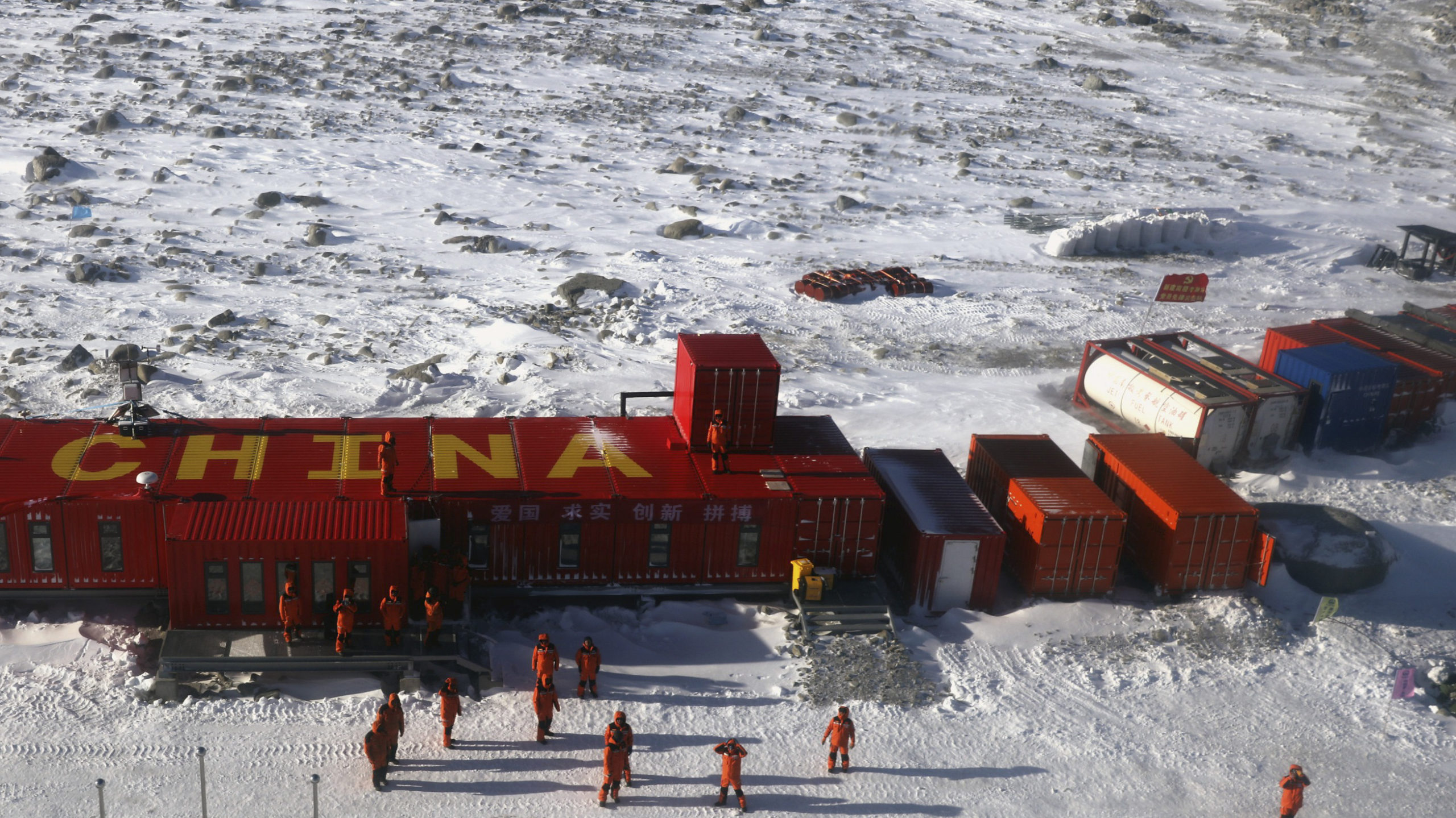 From the late 19th to early 20th Century, numerous expeditions were carried by European colonial powers to explore the ‘white continent’ while China back then was a weak and vulnerable power, grappling to shield itself from the colonial influences. Antarctica may be the only landmass that has not been affected by the COVID-19 pandemic. For many decades, Antarctica – the icy wilderness was guarded against exploitation. Antarctica has a treasure of resources consisting of oil, minerals, commercial fishing, coal and hydrocarbons and has been considered as a global collective where no nation has territorial claims. Fishing in the region is regulated by a robust global convention based on good science and communication. However, the Antarctic seas presently suffer abnormal pressures from climate variation and ocean acidification. Global warming has also been responsible for the acidification of the waters in the region. One of the primary species in this vibrant ecosystem is krill, which are a significant component of the Antarctic food web and ecosystem.

The Antarctic Treaty was a 1959 deal that was implemented during the course of the Cold War and was endorsed by various nations to preserve Antarctica solely for amicable and friendly purposes. It was a Cold War tool directed at maintaining rivalry within the Soviet and the U.S and anxieties over regional claims among the Antarctic signatory nations. This covenant later swelled into interlacing of laws and controls to what came to be known as the Antarctic Treaty System (ATS) which applies to sea and land, alongside other global laws. Just like the 1982 U.N Convention on the Law of the Sea, the ATS aims to prevent disputes among the nations, foster global harmony and empower scientific advancement. The Antarctic Treaty forbids any military or mining exercises in the sphere, but it does permit for the administration of the Antarctic fisheries. Under the following treaty system, nations are entitled to examine one another’s research amenities to not only keep all members aware of continuing projects but also make sure that no nation is up to anything treacherous.

Australia presently controls over 40 percent of Antarctica and has gained recognition as a global actor in Antarctic environmental administration and remains a principal actor and protector of the Antarctic wilderness. Australia has committed almost $190 million for its 2020–21 Antarctic programs and is one of the most vital actors in the continent.

But in the last few decades, even as the world is observing the North Pole, the South Pole is swiftly growing into an amphitheater for great power rivalry among the nations. The jurisdictional vacuum in the ‘white continent’ has become a place for battle over resources for the nation-states. The New York Times in 2017 had asserted that “maps will need to be redrawn”, when an enormous iceberg broke apart of Antarctica. Antarctica has become a territory for China’s rise as an international actor and a barometer of a climate shift. China wants to change the Antarctic ‘Balance of Power’. Its movements in the South China Sea have paraded its readiness to overlook international law. Beijing regards the icy wilderness as a “‘wealth house of resources’” crucial for its sustained economic advancement. Post-1980s, China began participating in Antarctic affairs after it unlocked the door to the world through economic reforms. China’s strategic interests in the Polar Regions lie in security (Traditional and non-traditional), resources, science and technology. As per the 12th Five-Year Plan (2011–2015), China commenced a polar engineering study web to strengthen and expand the research ties within space and polar engineering and has been keeping a watch on the eco-rich oceanic life in the Antarctic waters.

China has already topped up place naming and aims to increase domestic presence through tourism and molding public sentiments within china through various forms of media to set the ground for feasible territorial claims. It is anticipated to use many more easy and informal tools to increase its toehold in the region. China’s stakes in the resource-rich Antarctica have expanded in contemporary times. It is believed that through the years China is determined to upturn the Antarctic Treaty System (ATS) that was strongly based on harmony and scientific research following the period of World War II. China since the consent to the Antarctic Treaty in 1983 has been extending its dominance and control over the Antarctic mainland and the Southern Ocean. China’s standard description of the land of icy wilderness is that the region associates to ‘No sovereignty’ that is further iced under the rules of the Antarctic treaty. China does know that it needs to be in the opportunity where rulings regarding resources are made.

China has made important geophysical explorations and named numerous places in the region. The glacial regions, outer space and seabed are the chief strategic areas and interests where China will pull the resources to grow as a global power. China began its scientific research mission and its first icebreaker ‘Snow Dragon 2’ set off for Antarctica, in late 2019 which joined its Ukranian built sister ship ‘Xuelong’. It also considers Antarctica as a valuable workroom for planning for an upper-level space program. China was the only country in the world that established so many research stations in Antarctica since the 2000s. China has also established an intercontinental Antarctic sky route and is assumed to use its Air Force jets shortly to build its capability and polar activity. Australia had facilitated China’s expansion in Antarctica from the late 1970s. But now both nations have locked horns against each other. Australia is preparing for new hurdles of emerging international order. Hobart in Australia’s Tasmania is now China’s main outside Antarctic logistics stand.  A report published by the Australian Strategic Policy Institute declared that China has been involved in undeclared military activities and mineral research that has breached international law.

The Chinese dragon and Russian Zilant dragon have taken hold of the COVID-19 crisis to increase their foothold in the white continent even further though Russia has been a long-drawn great polar power before China. Despite China and Russia having experienced the consequences of the coronavirus, their choice not to press halt on contemporary or planned plans in Antarctica leads to how menacingly the Chinese dragon and the Zilant dragon navigate through the polar regions to manifest sovereignty.

China seeks to further blend Antarctica into its Belt and Road Initiative (BRI) and persevere environmental strategies to further its territorial scope just like how it has created an ‘Arctic Silk Road’. Chinese President Xi Jinping had earlier unveiled that China steadily calls for a more considerate government to increase international participation in the Polar Regions, deep seabed, outer space and the Internet.  The Polar Research Institute of China (PRIC) plays a chief role in carrying analysis on science and technology and strategic concerns in Antarctica. PRIC accounts that there is 500 billion tons of oil and 300–500 billion tons of natural gas on the Antarctic continent, apart from a possible 135 billion tons of oil in the Southern Ocean. The glacial regions are essential for China to build its global outreach. China already has four Antarctic bases with the fifth base to be completed by 2022 alongside the announcement of a permanent airfield has an increasing growing presence among the ATS signatories.

The seaside waters of China have almost been exhausted with fish and it is also massively advancing in aquaculture and oceanic ranching, as China would need Krill to feed the farm fish. The Commission for the Conservation of Antarctic Marine Living Resources (CCAMLR) convention was put forth in 1982 as an element of the Antarctic Treaty System. The convention converges on the fisheries administration panorama, which states that any fishing has to be done in a way that doesn’t ruin the ecosystem convention.  The following convention explicitly comprises the Southern ocean where the piscaries and aquatic living resources survive. The convention asserts on the sustainability of the fisheries. It was only in 2007 that China joined the CCAMLR. When it entered into the CCAMLR, China acknowledged that the convention pertains to all fishing in the southern ocean.  When China joined the convention after years, it reached with different expectations such as strategic interest in fisheries and mainly krill. So, China covets to amplify the capability to exploit this resource.  For the Chinese government, occupancy in Antarctica is a win-win strategy.

Through the BeiDou satellite system, which is a dual civil-military technology, China’s polar study stations play a critical function in supporting China to improve its command, control, communications, computers, intelligence, surveillance and reconnaissance (C4ISR) system capabilities. The stations established by China’s Global Navigation Satellite Systems (GNSS) has better attentivity to the nation’s capacity to geo-shaping position electronic means. China has a great polar ionosphere, geomagnetic and auroras experimentation program that profits from the Arctic and Antarctic study. It has been pressing a hard deal of discussions over resource extraction and maintenance. Since the glacial areas are increasingly heating temperatures, China wants to shield its interests in the Antarctic domain. China has been targeting nations with territorial claims in the Arctic region to gain influence by investing in important anchorages in Norway, Iceland, Greenland and Russia.

China’s presence is set to become a frequently grave concern at the international level. Australia has been at intersections in its foreign strategy, viewing Asia for its economic accomplishment and also as seeing the prime security perils come from Asia. The U.S. Air Force even urged for more polar financing and suggested that race among the nations in Antarctica is just a fraction of years away.

The great power in the icy wilderness is plausibly going to become unavoidable as the Middle East oil demand is expected to fall when the global demand is predicted to peak at 2041 with 115 million barrels a day and a gradual decline from then onwards apart from the domestic demands among the nations.  The Antarctic race will soon follow the U.S rivalry with China and Russia in the South Pole. The transitorily shriveling bearing of the west on the region due to COVID-19 will point to less glassiness in Antarctica.