Managing a Post-COVID Global Order: Looking Through the Lens of International Relations 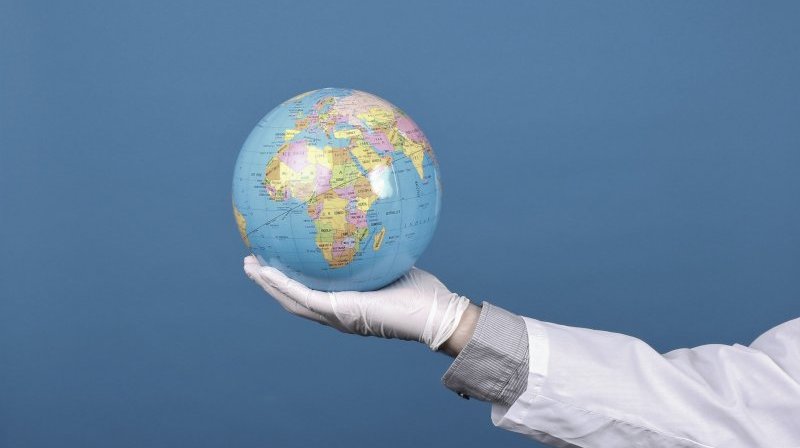 Globalization had ushered in, as the proponents and theorists argue, the concept of ‘one-worldness’-the notion of viewing the Earth as a single space, connected, in real-time, through advanced information and communications technology. The world had virtually become a global village’(Mc Luhan). Kishore Mahbubani argued through his logic of the one-world that there was an extreme possibility of civilizational convergence, especially across Asia and the West. International Relations had been elevated to the level of global politics, as global problems, issues and challenges were emerging, that required global solutions, with states working in tandem, in a spirit of ‘complex interdependence’. Environmental challenges, human rights, gender issues, global trade, global terrorism had emerged as issues that affected the world as a whole and could emerge as factors determining global security. The search for comprehensiveness in the realm of security, provoked theorists like Barry Buzan, Ole Waever etc. to argue for emergent notions of non-traditional security, human security. But the emergence of global terrorism and the scourges of the same severely challenged the notion of ‘security’ of the states across the globe. Another vexed question remained whether IR had really witnessed the ‘truly global moment’.

Of late, COVID-19 has become a buzzword, created a global stir and ushered in a global medical emergency in the form of a global pandemic, that has impacted most of the countries across the globe-humanity as a whole seems to be under a severe existential threat. COVID pandemic seems to have pressed a global ‘Reset’ button, thereby stimulating a process wherein policymakers across the globe are virtually working in tandem to combat the crisis and attempting to formulate alternative socio-economic policies that can perform in a futuristic post-COVID world.

COVID is genealogically speaking-a public health crisis and has a potentially fatal demographic impact with secondary implications for the economy, and society at large. (Rohini Nilekani: The Times Of India) Lockdowns and social distancing as immediate containment measures have the potential for containing rapid spread of the pandemic but have a disastrous side-effect of slowing down the economy and can have psychological effects on the population who are compelled to maintain social distancing due to lockdown.

COVID-19 is threatening global food, health and human security, and related economic insecurity can further stimulate the crisis of political and military security cutting across the globe. The world is entering a volatile and unstable new phase.

How the discipline of IR and security studies will interrogate the crisis, remains a vexed question. COVID seems to have implications for both traditional and non-traditional security. COVID-19 is exposing the link between human and planetary health.

War zones can witness increased military violence, resource scarcity can fuel ethnic violence. The Global South can be more vulnerable in this respect. Human Security concerns loom large with the global economic meltdown is stimulating job losses, lack of employment. The Global Trade sector has taken a beating with borders closed during the lockdown and will take quite a period to revive. In the wake of more protectionism and decaying supply chains, the global depression will be longer and more painful.

Violence against women and human rights abuses have already spiked – both of which are harbingers of other forms of violence. This is set to intensify as at least 1.5 billion children and young people are sent home from their schools and universities.

The Global South-Impact of COVID

COVID-19 will hit the most vulnerable populations hardest. The Global South faces a very difficult choice as it is nearly impossible to socially distance and get food(work on a daily basis and earn bread). Then there is the acute problem of the migrant labourers. Without a social safety net, the lockdown has increased their misery by leaps and bounds as they are facing joblessness and many a migrant labourer are finding it extremely difficult to return to their native places. The pandemic has slowed international trade even further and has virtually shut down domestic commerce as well in most of the poor countries. Without a proper fiscal stimulus package managed by respective governments, the plight and misery of idle workers therein are incrementing daily. Many countries of the Global South are unable to replicate measures adopted by their wealthier counterparts and are counting on warm weather to contain the contagion at their borders. The worst of the financial fallout is hitting the warmer nations of the Global South. A slightly favourable climatic condition is unable to act as a balancer against unfavourable factors like population density, inadequate public health management systems, poverty and underdevelopment(in variable patterns) etc.

Geopolitical Rivalry among the Major Powers and the China Factor

Will geopolitical contestation increase in the wake of the pandemic? China is already making headlines as a ‘virus creation and dissemination centre”, accusations of instituting a sort of biological warfare with Chinese antecedents are also grabbing headlines

COVID-19 is putting hard security threats between nations back into the spotlight. The geopolitical rivalry between the great powers is likely to worsen as the American and Chinese economies become less interdependent. The next tier of major powers poses risks as well. Europe has been hit hard by the virus, once again fraying ties between the Eurozone’s stronger and weaker economies. A lot of speculative analysis is on the rampage regarding China’s loosening grip on the post-COVID world order.

The statist viewpoint of Realism has come to the forefront. Realism posits that states are still the main actors in international politics and the situation arising from Covid-19 just reaffirms that point. Citizens of every state are seeking protection against the crisis not from non-state actors, but from their own respective national governments. States have been the drivers, engines of the ‘global fight’ against COVID. The primacy of the states, state sovereignty, state borders, border controls seems to loom large, although military security dilemma(as championed by Realism) has somewhat taken a backseat and health and demographic security concerns are virtually tormenting statesmen and policymakers alike.

Researchers in IR often takes recourse to the Constructivist paradigm to find any alternative explanation of global events, once the Realist research agenda falls short.  Constructivists argue that everything in IR is a conscious construction of the states and the people who constitute them. If anarchy is created by the states, power politics is a social construction and material interests of states have a covering of ideas and values around them, then Constructivism could possibly provide a realistic explanation of the COVID pandemic as something originating in the Chinese mindset, getting shape in the Wuhan medical laboratories, then taking the material reality of the global pandemic stimulated frantic efforts of states to fight and contain this health emergency. Here, anarchy could refer to the utter crippling of the global regulatory agencies, in preventing the pandemic to take such a fatal shape. But, the existing theories do not have as yet, as a part of their research agenda, any possible explanations of how the post-COVID global order may take shape.

How IR can possibly interrogate a post-COVID emergent global scenario?

A new global order may see the light of the day, once the virus bids adieu all-comprehensibly, leaving behind its impact on humanity across almost all parts of the globe. The post-COVID global order seems most likely to be an interdependent one (The Pluralist dream project). Competition and rivalry among states maybe a shade subdued as they may have to join hands for rebuilding the global socio-economic and political architecture. Social distancing and electronic communication among people will continue, transborder trade across the globe should continue amicably, the need for politico-economic cooperation among the states should be felt more strongly than ever. Humanity should plan to grapple with this new ‘reality’-the one which dawned on the spread of the virus and its impact construction. Containing the contagion and then managing the collateral damage to the global socio-economic and political architecture should engage policymakers, and the common mass cutting across the entire globe. Experts, researchers in IR and security studies should attempt to academically interrogate the crisis and the policy responses attempted to manage the same. Global Governance network-can it be a platform for managing the post-COVID global order? Non-Traditional security analysts should come up with a more succinct analysis of public health security systems especially the global divide in standards. IR specialists in the Global South could face an even daunting task as the impact of the pandemic will be far more entrenched and long-lasting, given the lesser patterns of development, demographic density, resource scarcity, poverty and the climatic conditions prevailing therein. The pandemic should have given a clarion call for bridging the North-South divide –how they can join hands in managing the crisis with information, resource sharing, socio-economic and political cooperation should be a futuristic research agenda in IR. The war against coronavirus is even harder than the War On Terror, the enemy is all the more faceless and non-human, even more lethal. Military weapons are meaningless, non-applicable, socio-economic and health engineering are only preventives when applied demographically, but objectives are easier to be set than achieved. De-escalation of conflict, peacebuilding, followed by multilateral action by forming a global consortium of states. The importance of national state systems are at an all-time high, be it in parts of the Global North or the Global South, as societies become more inward-looking due to adherence to social distancing norms and the common mass looking up to the state for this crisis management. The Post-COVID global order needs to be well managed for humanity to survive. Researchers and analysts in IR and Security Studies should academically interrogate this changed scenario and through soul-searching research, should strive to provide policy prescriptions for the decision-makers, using their theoretical insights in sync with the new realities of a ‘Coronized’ globe facing them.

1 reply on “Managing a Post-COVID Global Order: Looking Through the Lens of International Relations”