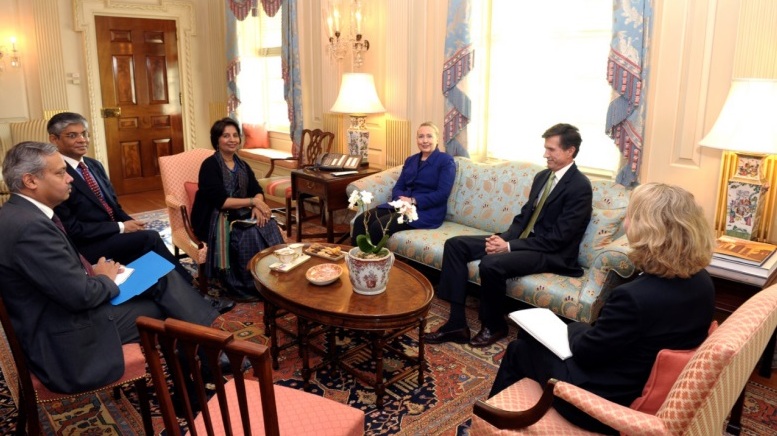 In 1905, The Indian Ladies’ Magazine published a short story by Begum Rokeya Sakhawat Hossain of Bengal, Sultana’s Dream.  The story spoke of a feminist utopia- a queendom where men lived in the purdah and women roamed free- a state without sin and crime. The decision to domesticate men in the “mardana” was taken by the queen when the men were unable to win a war with their physical strength and military strategy. Instead, it was the women who came to the rescue. The women marched onto the battlefield- and used “brain” power and scientific technology created by them.

In circa 411 BCE, Aristophanes wrote a Greek play – Lysistrata – which presented a case in women’s diplomacy to end the Peloponnesian War between the Athenians and Spartans. Sick of the never-ending battle, Lysistrata called a meeting of women of Athens and Sparta to discuss that these women forbid the men from having sex with them until both sides signed the treaty of peace. Finally, the women emerged successful in their mission for peace.

Identifying the Lack of Parity

While the idea of women taking the lead in determining international relations and foreign policy captured artistic imagination, as far back in 411 BCE, the images that one usually associates with the conduct of foreign policy and diplomacy are of institutionally trained, highly skilled men, in elite and professionalised setups, discussing secret and classified information. These images aren’t derived from abstraction; they are based on precedent and tradition. Men have monopolised the conduct of foreign relations for centuries. To an extent, this monopoly is foregrounded in the very conceptualisation of the discipline and practice of International Relations (IR). War remains central to IR and this association genders the discipline- war is viewed in highly masculinised terms of power, aggression and military strategy. This seems to stem from the notion that women and their bodies are naturally suited for child-bearing and nurturing while men serve as protectors and defenders given their physical strength. Thus, navigating foreign policy and relations implies negotiating conflict- to declare, delay or avoid it and minimise damages, particularly for oneself.

Consequently, women’s narratives of conflict and its impact- be at as victims of sexual violence or experiences of being pushed to poverty and sex work-remain largely absent from mainstream academic and policy considerations. Women, too, remain under-represented in positions of leadership and decision making. The latest figures released by UN Women confirm this marginal representation- women constitute only 25% of the world’s share in parliaments and critical decision making spaces. While less than 7% of women serve as heads of state, only a little over 30% of women hold foreign affairs portfolios around the globe.

In India, the case is particularly abysmal. While India, recently saw one woman external affairs minister, who was more on the back-end than in the limelight, only around 10% of the missions in India are headed by women. The Global Gender Gap Report, 2020 adds to the concern in ranking India 112th on its performance on the Gender Gap Index.

Yet, merely increasing representation of women in critical decision making positions isn’t a one-stop solution.  Even if women occupy these positions, it doesn’t necessarily translate to gender-inclusive policies or decisions. Former ambassador Nirupama Menon Rao points out that the women who do make it to the top are left with little option but to adopt approaches that differ little from their male colleagues. Moreover, historically women who have made it to the top have found themselves to be at a disadvantage, often based purely on perceptions of their gender- even in gaining allies. For instance, a book on the war to liberate Bangladesh in 1971 evidences that US President Richard Nixon and Advisor Henry Kissinger had a clear preference for Pakistan’s male leader Yahya Khan (over Indira Gandhi) who “was a man’s man. He wasn’t some woman running a country.” The preference also saw very tangible outcomes with the US providing military aid to Pakistan in the war.

The intervention, then, is needed at three distinct but inter-related levels- (i) facilitating the increase in the number of women in critical decision making positions, in this case, pertaining to foreign affairs; (ii) making the environment these women work in more gender-inclusive, equitable and just; and (iii) re-structuring foreign policy and the larger IR discipline to utilise the gender lens and mainstream the narratives of women.

As Rao points out that, for a long time, the marriage bar prevented the rise of women in foreign services. While this discriminatory requirement was removed in the 1970s in India, the bar still remains very much present-albeit invisibly. While at one level, this calls for the whole re-structuring of marriages and domesticity- where currently women are to prioritise domestic stability, motherhood and childcare over their own career development- a long-term process, some special concessions and incentives can be provided to women and their families- to encourage an increase in the number of women in the services.

A solution to address the second challenge of gender- disadvantageous working environments is to incorporate gender-sensitisation modules when recruits are trained before assuming office and conduct workshops on creating gender-equitable work environments at regular intervals. Further, a secure feedback mechanism should be installed where women can record the department’s performance on the same count.

In the third area of intervention, India has a long way to go. India is yet to come up with a National Action Plan for the UNSC Resolution 1325 – Women, Peace and Security- which seeks to bolster women’s leadership and participation in domestic and international peace and security. While this inaction stems from India’s apprehension about UNSC’s preponderance in domestic matters, there is no reason for policy-makers to not restructure policy on similar lines independently. India can take a cue from Sweden and Mexico to re-evaluate its existing foreign policy and formulate its own feminist foreign policy.

Active interventions at these three separate but intersecting levels can, thus, go a long way in bolstering female presence in foreign affairs, empowering leadership and enhancing gender-sensitivity and inclusivity in policy decisions and formulation.