Wave of Global Protests and the Future of Democracy 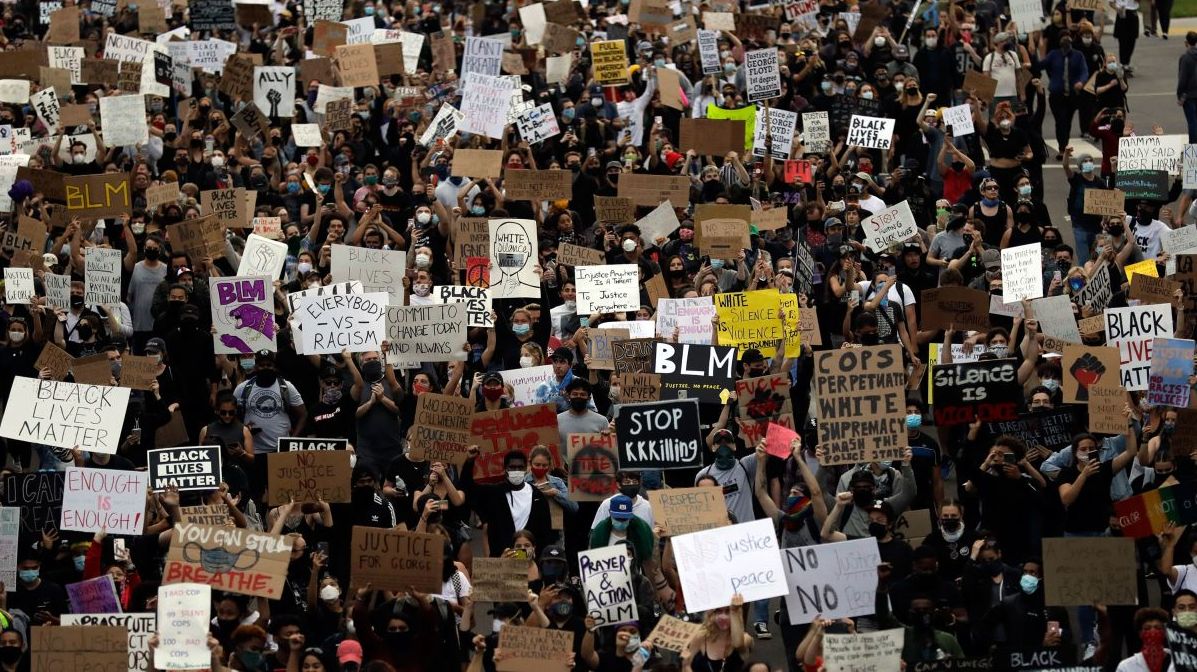 In these days, varied nation-states have been challenged by the mass ‘protests’ and demonstrations aiming at their failure in withering away the stumbling blocks and persistent prejudices in the pursuit of establishing egalitarian society, pursuing sectarian policies resulting in the marginalization of others by the government, and authoritarian regime’s struggle of keeping intact the anarchic apparatus by suppressing the voice of freedom, justice and human rights.

Those protests, charged with their political aspirations, were seen in the form of resentment over the extradition bill in Hong Kong, Citizenship Amendment Act (CAA) in India, myriad socio-political issues concerning with prevalent inequality, privatization, anarchic political apparatus in Chile and the recent protest over the death of George Floyd in the United States. Remarkably, all those sorts of demonstrations are led by youngsters and saw the overarching participation which left the government with no option to go beyond the limited force, and in retaliation witnessed the (condemnable) violence in some places by the protestors. The unrest has shaken the legitimacy of most of the democratic countries’ political apparatus, their power and challenges the claim of peace through democratic means and principles.

Concerning the continuing protests in the Hong Kong, the residents over there vehemently criticized the alleged tampering of ‘special autonomy’ provided by People’s Republic of China (PRC) and at the same time, latter’s attempt in strengthening its direct control thorough Fugitive Offenders Amendment Bill, where it would allow China to extradite the accused in the mainland territory. Over a while, the protest was intensified and later turned violent where both demonstrators and police officials skirmished with each other resulting in massive causalities and loss of lives. Already facing the backlash from the international community and witnessing overwhelming economic loss, China approved the ‘national security’ bill which would evade the local legislative process and this move has received strong opposition from the protestors who see this as an infringement to their political freedom and civil liberties. Protestors categorically asserted five demands namely the withdrawal of the bill, an investigation into alleged police brutality and misconduct, the release of all arrested protesters, a retraction of the official characterisation of the protests as “riots”, and Chief Executive Carrie Lam’s resignation along with the introduction of universal suffrage for the election of the Legislative Council and the Chief Executive of Hong Kong to be fulfilled. Although Carrie Lam withdrew the contested bill, she didn’t agree to concede other demands of protestors. Moreover, the protestors alleged that the National Security Bill is Beijing’s attempt to dissolve “One country, two systems” praxis.

Conundrum of Citizenship in India

As far as the protest over Citizenship Amendment Act (CAA) in India is concerned, the bill was introduced in the lower house of the parliament and passed,  where it aims to provide Indian citizenship to all illegal migrants, who were forced to flee in the fear of persecution, except Muslims from Bangladesh, Pakistan and Afghanistan in pre-2014 phase. Indeed, the objective of the act is commendable and is the manifestation of country ruling with the democratic principles and respecting the human rights, however, the deliberate marginalization of a particular community raises several questions and led to popular unrest. The advent of the act marked the large-scale protests in several parts of India. Particularly, Assam and other north-eastern states perceived granting citizenship at the cost of their political, cultural and land rights and hence, massively protested against the bill and the government where in some locations, it turned violent.

On the other hand, Muslims felt explicit discrimination by the ruling Bhartiya Janta Party and demanded the inclusion of migrant Muslims as well in the Act. The watershed movement of the protest was seen in the universities’ campus, primarily Jamia Millia Islamia and Aligarh Muslim University. As per the students’ testimony of Jamia Millia Islamia, they protested initially ‘peacefully’ against the act and went out of their campus to go Parliament, but after one mile, they faced massive blockade by the police. They resisted the blockade, however under intense pressure from the students, police fired tear gases over them with the intention of dispersion. The continuing actions of police provoked the students. On the evening of 15th December 2019, police entered the university campus without the permission of university officials and brutally beaten up the students, where one of the testimonies has been recorded of police brutality in the central library of the university. On the same day, the protest was going in Aligarh Muslim University where the students alleged police entering the campus and beaten up the students. In one instance, paramilitary personnel was seen pointing his assault rifle over the students. These sorts of assaults on universities gained popular support from other universities and civil society.

Undoubtedly in a democratic society, citizens have the right to protest against the government’s policies and to ask the rationale behind them. However, the use of force and not persuasion sometimes faces severe backlash which results in deteriorating the issue. The pursuit of ‘Dialogue’ could have resolved the issue and but the unwavering and stubborn outlook of government towards the protests made things complicated and put the government in a difficult situation.

Resurgence of Racism in the USA

The United States was considered the ‘melting pot’ when the people of different origin and nationality set their foot on the American land and diluted their former nationality and allegiance and became the citizens of the United States of America. Although the US Declaration of Independence articulated that “All men are equal” but in praxis, white supremacy has become a major stumbling block in establishing an egalitarian and just society. The United States has for a long period trying to vanish the white supremacy from its land and integrating the society to make a strong nation, both inside and outside. However, the right-wing faction of the American society, where most of them are white Anglo-Saxon protestants, had long discriminated against the blacks and others. Anglo-Saxons have always dominated society and enjoyed exclusive privilege concerning education, voting rights, citizenship among others.

A few days back, the death of George Floyd by a Minneapolis Police officer sparked the social turmoil and unrest in the United States and twitched the American milieu. His death ignited long-simmering anger over racism with the national eruption of demonstrators hitting the streets. Death of George Floyd is not the first case of racism, in 2016, two black men were shot dead by the police leading to nationwide protests with the call of rising police killings. In 2017 as well, a study was conducted to finds out the police behaviour towards both White and Black Americans and it founds quite disheartening that police of many occasions becomes prejudiced against the Blacks.

The wave of protest was spread like fire more than 200 cities of the United States and 12 major cities have imposed curfew in the backdrop of the violent skirmishes between police and protestors. It is the first time in the US history of the largest deployment ever happened to establish law and order again. Moreover, the protest was not seen in US cities, but people from Berlin, Copenhagen, London, Paris, Perth, Toronto and Vancouver came out in solidarity and supported the ‘Black Lives Matter’ movement.

As a matter of fact, democracy as a political system has helped in achieving relatively peace, stability, and economic development in overwhelming countries by shunning autocratic and authoritarian regimes and monarchies. However, over a while, protests and demonstrations have exposed the failure of various democratic countries in their fulfillment of establishing an egalitarian society and setting up a democratic political apparatus of the state. All the aforementioned protests and some others like Sudan protests, Chile protests, and the Yellow Vest movement are led by the youths to regain the lost democracy of their societies. Interestingly, many youths became the face of those protests like Joshua Wong in Hong Kong, Ladeeda, Chanda and Aysha in the CAA protest of India, Alaa Salah in Sudan protests. The ongoing democratization wave will certainly correct the political and historical wrongdoings. Besides, it is a matter of concern for political scientists and stakeholders to gauge the impact of those protests over globalization, political economy, shifting class conflict and citizenship. This year, the novel coronavirus has already made the whole world suffer and severely impact global trade. In this backdrop, the anxiety of job loss and fear of unemployment has diverted many towards violence and creating chaos. However, certainly, the ongoing protests will change the whole dynamics of the complex regional/national political system and will lead to the diversification of democracy.