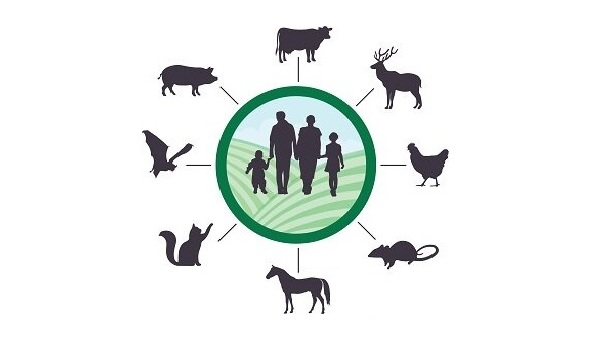 The outbreak of COVID-19 exposed the susceptibility of human achievements and the lethality of a virus. The world is plummeting in a state of intact hiatus. The health of human beings and the economy is hit hard by the pandemic imbroglio. This Pandora’s box has brought the global community into a breaking point. Medical scientists categorised this pestilence as of ‘Zoonotic Origin’ and developed an extrapolation (15 zoonotic virus families take its root from 200 species of bats) projecting bats as host. This article tries to ponder over the genesis of Zoonotic diseases vis-a-vis to environmental complexities. Zoonotic diseases are those caused by pathogens that are transmitted by vertebrate animals to humans. Such a ‘source of origin’ makes this category of diseases less direct, less intuitive and less predictable. About 60% of emerging human pathogens are  Zoonoses. Environmental vicissitudes especially that of most hotly confabulated and debated phenomena of ‘global climate change’ has a high hand in the hapless trend of surging zoonotic diseases in the world.

Global temperature is soaring at an unprecedented rate due to anthropogenic emission of greenhouse gases facilitated by ‘global climate change’. As per the Intergovernmental panel on climate change, the propensity of temperature could lie between 1.8°C and 4°C by the end of the 21st century. Increased global surface temperature, rising sea level and decreased arctic and alpine snow and ice exhorts the plants and animals to respond to these changes by moving higher elevations or closer to poles. Prime mechanisms by which climate change affects the frequency of zoonotic diseases are range shafts, changes in population density, changes in preventions in host or vectors population, interactions of climatic variables.

The range shift is a natural response to climate change. Unprecedented changes in their habitats demeanour prompt the species with high mobility rate to make an agile response to climate change and this results incapable species undertaking long migratory movements shifting their range first. Climate change at higher altitudes stirs the range shift of hispid cotton vat, the host of black creek canal hantavirus to the subtropical and temperate population centre. Hantavirus is a toxic zoonotic infection commonly seen in Southern US. Species in low land tropic with low mobility and adaptable mettle is prone to population loss if a vague range shift occurs due to climate change.

Host immunity is critical for decreasing the probability of transmission and penetration. Stress escalation in the host population due to environmental complexities emasculates the host immune response which increases the probability of infection, higher pathogen loads, pathogen shedding etc. Y petis ( a zoonotic bacteria), the ecological agent of the human plague develops and demonstrates biofilm efficiency at temperature >28°C. Biofilm expedites the Y petis transmission by causing the inflicted flea to soar feeding and regurgitate into host animals. Zoonotic host population is susceptible to viral replication under heat stress. Replication and shedding are detected intermittently in inflicted North American deer mice.

Interactions among several climatic variables break the environmental equipoise and increase the risk of a zoonotic breakout. An increase in North American deer mice in Colorado, which is a high altitude region from 1995-2000 is influenced by an increase in rainfall during the warm period and not cold period. Anthropogenic factors (deforestation, agricultural expansion, construction of towns, road building etc.) along with climatic variables expedite the process of habitat loss. As per IPCC’s 4th assessment report, 20-30 percent of species are on the brink of extinction as the global temperature exceeds 2°C-3°C above the pre-industrial level. The high extinction rate of specialist species due to climate change generates an imbalance in the generalist-specialist population ratio. This breach of equilibrium makes the generalist population more vulnerable to infection. A study conducted in Yosemite National park detected an expansion of opportunistic small mammal species towards the upward range that their long-lived and less found counterpart. Hence, selective extinction is an ominous phenomenon as it escalates the risk of some zoonotic infection in both wildlife and humans.

Global warming accelerated by climate change is also a vital catalyst of the zoonotic upsurge. Lestimaniasis is susceptible to perpetuate at a snowballing rate at an excess temperature as sand flies are more active at the higher temperature and take frequent blood means, which in turn increase transmission.

Queer Enviroenemtnal metamorphosis such as the rise of sea temperatures, melting of polar ice caps and glaciers has a huge cost to pay as it creates a conducive atmosphere for the eruption of natural calamities like flood, drought, landslides etc. Floods and excess water presence in land culminate in the outbreak of waterborne diseases. Hence, it’s inevitable to maintain ecological equipoise because its breach can cause large scale damage to ecology as well as human life.

The recent outbreak of COVID-19  is a clarion call for multiple stakeholders in health, environmental spheres to invigorate policy initiatives to reverse climate change and thereby zoonotic outbreaks. Epidemiologists and other stakeholders in the health sector have to ponder and trace the genesis of zoonotic pathogens and catalogue areas and animals fragile for human transmission. Appropriate data and human capital are intrinsic to conduct an elaborate study on zoonotic upsurge vis-a-vis to environmental alterations. Augmenting research in the field of Zoonotic diseases has to be endorsed by the global community  (National governments and other stakeholders ) traversing myopic boundaries. Most importantly, governmental policies should reflect the results of these studies in congruence with a robust public health infrastructure.

The US president’s flagrant decision to halt WHO funding at the time of grave pandemic emergency, balderdash blame on third world countries or so-called developing countries for carbon rise fudging the developed countries role in soaring global temperature etc. is a setback to the coveted global consensus to combat ‘global climate change’ unleashing multiple chaos in the world. Acknowledging the gravity, countries with the highest carbon emissions should reverse the trend by indulging in pro-environmental activities. The so-called carbon tax levied to indemnify the impacts of pollution triggered by greenhouse gas emission should be harnessed to achieve the United Nations Sustainable Development Goals 11 (Sustainable cities and communities) and 13 (Climate Action). In an era of urban sprawl, global governments must implement ‘urban forestry initiatives’ and build ‘green infrastructure’ in urban centres. Carbon sequestration (afforestation and reforestation) measures are the other imperative tools to undo the global warming impacts on the environment. In global health infrastructure, increasing the funding to the World Health Organization and other stakeholders coalesced with pro-environmental measures heave a ‘zoonotic free world’.