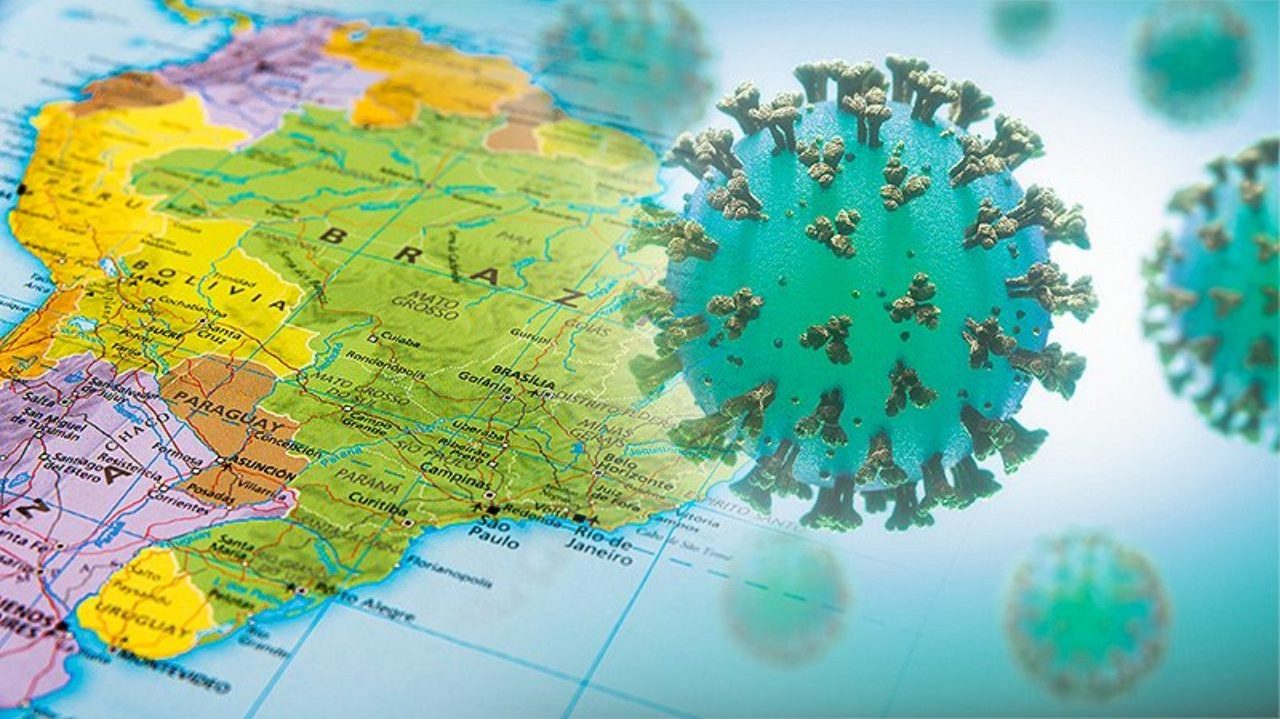 Global phenomena, complex and cross-cutting, in their transpiring, come with the interplaying set of known-knowns, known-unknowns and the unknown-of-unknowns. The scourge of COVID-19, in all its unprecedented, unforeseen and uncharted dimensions, has an interspersing mix of each, yet, incoming from virtual left-field, and continuing to ravage the global landscape, leaves us none the wiser. In doing so, it has sternly tested state wherewithal, societal resilience, and political stewardships, alike, showcasing and showing-up, eclectic shades, of each of them, across most geographical coordinates around the globe. And none more so, than in transcontinental Latin America, with regional powerhouse Brazil, alongside Mexico and Chile, at the searing experiential vanguard, of that part of the world, which, despite being a calendar-laggard in contracting the virus’s spread, has since catapulted-up the pecking-order of afflictions and fatalities, such that, the World Health Organization, now characterises it, as being the ‘new epicentre’ for COVID-19. And why not, since Brazil remains the second most wrought country on the virus proliferating sweepstakes and counting; Mexico’s cases have hit an exponential spiral with the 3rd of June in particular, bringing well over a thousand deaths, leading to morbidity proportions, in Italy and Spain paralleling double-digits orbit; not to mention Chile, which, despite its extremely low deceased count, is witnessing a recent rapid upswing in infections, with the virus having laid low its Public Works and Energy Ministers, respectively.

As leaderships around the world grapple with the daunting formidability of beating-back COVID, their approach styles and decision-making temper, have straddled the extremes of crises of credibility, coherence and competence, and all that situates between it. This said, echelon political figures in power in Latin America, have been a revelation, in incredulity and incoherence but also grotesque incompetence, by word and deed. And one must not circumscribe it to right-wing Brazilian President Bolsonaro and his belittling utterances of COVID being “just small flu” alone; the trivialisation has emanated from adherents of all ideological hues and persuasions, with leftist President Lopez-Obrador of Mexico, having been dismissive no less, in his obnoxious suggestion of COVID being an ordained punishment, for the rich and their ostensible sins. Nicaragua’s leftist revolutionary President Ortega, indulged, in similar rubbishing of COVID and its lethality, before doing an extended disappearing act, as his tiny Central American country, braved and braced for the onslaught, with its commander in chief, absent from titular chaperoning.

Viewing the unfolding Brazilian saga, one can’t help have an eerie feel of a mirror replication in the Bolsonaro and Trumpian approaches, which almost begs the question, whether these leaders are indeed the persona bosom-buddies, in the archetypal mould of the no daylight passing Anglo-American alliance. Notwithstanding their much famed Mara-a-Lago dinner meeting in the midst of the pandemic, both have almost verbatim ridiculed the dint of the virus and the darn prescriptions of medical science exponents; each of them has headed to excoriate China as super-spreader more than progenitor, in an apparent attempt to scapegoat and deflect culpability at the wheel; and either has found themselves in a dystopian slanging relationship with their federal legislatures and provincial gubernatorial occupants, at a time when forging consensus and bridging the divide across the aisle, should be the imperative mantra, both at home and across the region, yet, have been at a premium. Of course, not to mention their mutual penchant for drafting in the military, as arbiter, and perceiving themselves, as national security sentinels.

Heading into the virus engulfing it, Latin American polity both nationally and regionally has been an exercise in self-destruction and deep-seated ideological polarisation, which has implied politics of paralysis and dysfunction within, and elusive cohesion without, on a regional endeavour and approach to addressing the festering civil strife in Venezuela and the destabilising fallout from the soft coup that deposed the Bolivian President Evo Morales. On the economic front, Latin America, despite emerging relatively unscathed and comparatively resilient, from the global economic and financial crisis, has since, on the back of fraught economic reforms and stalling diversification initiatives, decelerating commoditized export-driven revenues, and ideologically and economic circumstances impinging retrace in social inclusion welfare policies, been hobbled by underwhelming growth indices for close to a decade, and the pain and misery, is by all accounts, set to exacerbate, for societal sections and economic sector stakeholders, alike. The pandemic has set-off a globally aggravating stagflation, anchored in the trilemma of cratered demand, depressed supply and shrunken incomes, all of which not just renders eco-systems of economies in a tailspin, but relegates societies and within them, their weakest and disadvantaged sections, to imminent risk of comprehensive perdition. In the wake of COVID, Latin America, and most notably a 210 million strong Brazilian demography, skewed in pronounced inequality, and staring at gross unemployment, shuttered businesses and entrepreneurship, and fiscally parlous state budgetary framework, confronts the acute universally circumstantial yin-and-yang dialectic choice of squaring up lives-and-livelihoods, more acutely than most others, and here it seems over the top to be berating President Bolsonaro for endeavouring to unshackle the economy from enforced lockdown. While his flippant averments and cavalier mannerisms draw the plausible ire, the sentiment ought to be comprehended, as one counselling adaptation and mitigation approaches, in much the same way as society has willy-nilly taken, to issues of climate change and governance of the ilk.

It’s ironic that metaphors and idioms, which in these trying times have come to edifyingly signify consensually specific messaging across the globe, has met with an anti-thesis of meaning across Latin America, most notably again, in evidence in Brazil. While the campaign for stirring-up a crescendo chorus of sound, to cheer in solidarity for those at the frontline of the battle against COVID, became a Mexican wave rendition around the world, the clanking of pots became the signpost to conveying of public resentment and protest against national leaderships, in particular President Bolsonaro. Similarly, narratives acquire a meaning of their own, when imbued, with imagery evoking nomenclatures. As the world embraced the notion of Corona ‘Warriors’, to celebrate and exemplify the intrepidness of those in the redoubtable war against an invisible enemy in peacetime, the semantic has become but an unfortunate euphemism, for exuding adversarial polarisation and destructive populism, all of which is counterproductive in confronting a multifaceted challenge, in a region, ill-equipped in pertinent resources, and off-kilter, with its national and regional preoccupations and priorities.

And it’s not hard to find misplaced priorities in these impugning times. President Bolsonaro found the latitude to roll over two much respected but disputatious Health Ministers amidst a raging pandemic, and eased out the controversial but charismatic Justice Minister Sergio Moro, over mutually traded allegations of unfair interference and excesses of overreach, and potential abuse of authority and power, in law enforcement and criminal investigations, into the President’s family. This said, if the President emerging from his Presidential Palace to savour a hotdog amidst supporters and detractors, with social distancing norms thrown to the wind, was bad inspiration enough, then, joining fellow protestors in calling for the upstaging of the Supreme Court and federal Parliament, was poor optics of a country, which is so awry and cleaved. But whilst President Bolsonaro is hauled over the coals for feuding with constitutional entities, functionaries, and institutions, at a time of national calamity in urban concentrations and rural indigenous peoples’ countryside alike, the politics of venality, nepotism, manipulative machinations of power and cabal skulduggery, was neither his invention nor is his patent. If anything, it predates him and shall outlive him too.

The current concourse of circumstances runs the risk of driving Latin America, more specifically the strategic commodities export-oriented economies of Brazil, Argentina and Chile, into a further ensnaring compulsive embrace of China. The region’s commoditized economic spaces need Chinese buys, a proposition that may get thrown a lifeline if the US-China Phase I trade deal either stalls or unravels, bringing Beijing to source alternative agri-commodities such as soybeans from Brazil and Argentina, although the silver-lining respite could be short-lived, given that the initial vestiges of Chinese economic rebound, appear tempered, by structural collapses of regional and global demand. This said, in again an apparent mirror image of its Northern neighbour, governors across Brazil, particularly those in the country’s North Eastern geographical subset, though lacking a telegenic Governor Cuomo in their ranks, may have winced a leaf out of US governors, in phlegmatically crossing-paths with their President, through unilaterally sourcing medical equipment supplies from China, in ostensible circumvent and defiance of Brasilia, notable since, the authoritative wiggle room for such disposition, is constitutionally more winnowed, than in the US.

It’s tough to ascertain, what the future holds for the region. If epidemiologists are to be believed, the Virus thrives in frigid climes, and to that extent, the on-setting winter in the Southern Hemisphere could fructify ominous doomster scenarios, even as certain conventional wisdom hypothesis such as the inevitable rampaging spread across dingy congested human habitations, hasn’t quite borne out regionally and globally, a particular concern for cheek-by-jowl shanties in Brazil and the wider region. While little Cuba has once again brandished its acclaimed healthcare to salutary effect, the full extent of the stench surrounding mishandling of the virus’s proliferation is indeterminate across the multitude of countries in the region, and only topically subcutaneous in many others. Time was never nigh for the region to girdle its loins and get its act together, and none better than Brazil, to serve as a lodestar, shinning the pathway.