The Ladakh Contention: India and China at Potential Warheads 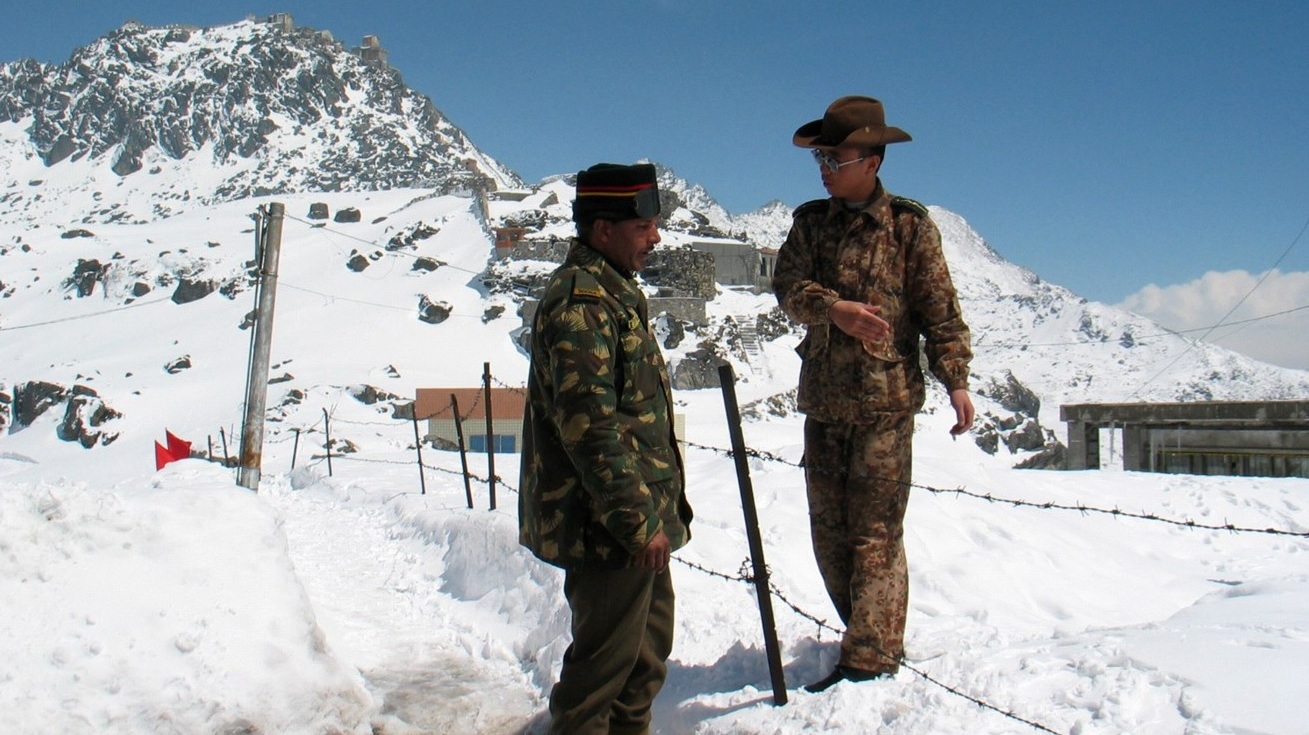 Amidst fighting against COVID-19 and the serious migration crisis in the country with natural disasters like the Amphan cyclone, India has another challenge posed in front of her in its northern frontiers – the latest skirmish with China in Eastern Ladakh. Beijing and New Delhi share a border area of 3500sqkm, the unofficial border – The Line of Actual Control (LAC) that has remained disputed for decades now. Apart from the 1962 conflict with china, India has fought two other disputes in addition to the latest Doklam standoff in 2017. Thus, it is no mystery that both India and China have a long history of mutual mistrust and several territories they both lay a claim on. The Tibet issue still remains a thorn in Sino-Indian relations and China’s constant aid and support to Pakistan and its efforts to squash Indian endeavours at the international stage (whether it is thwarting India’s entry into the nuclear supplier’s group or declining any support in the United Nation Security Council) does not help matters. Moreover, India’s growing defence and security ties with the Quad also threatens China while India’s rejection of being a part of China’s Belt and Road Initiative (BRI) has also irked Beijing. Needless to say, China and India have a complicated relationship that does not seem to simplify anytime soon. However, it is surprising that the Ladakh skirmish occurs at a time when the entire world is grappling with how to defeat COVID-19 or introduce a vaccine that could perhaps save the world. This even more so as the current friendship and relations between the leaders of the two Asian giants have been on a rise and very much the talk of Asian geopolitics.

For the past few years, India has consistently amped up its game to build border infrastructure in the form of roads and air stations for efficient patrolling and transportation of troops and other items if the situation ever arises. It has done so solely to protect its own territorial integrity and maintain a certain degree of preparedness since it is surrounded by six countries. Nonetheless, the Chinese have been irked by India’s current trend of proactiveness despite them mobilising forces along the Sino-Indian border or other parts of the world like the South China Sea from time to time. Thus, this has lead to a series of increased tensions along the LAC at the beginning of May 2020. This has happened in mainly three fronts:

The situation has since then further escalated since almost 10,000 Chinese troops have made way into Indian territories along the border causing the government of India to worry. Satellite images showcase new Chinese camps, tents and fighter aircrafts being set up on the other side of their border to which India has also responded by mobilising its soldiers along the LAC. In fact, according to reports of the Indian daily India today, the Chinese stealthily transported its troops in trucks that were actually supposed to be carrying soil for infrastructure projects. This was clear deception on China’s part and unfortunately, the increased military build-up and threats of even a minor confrontation is cause for a severe threat to the entire Asian region.

The Chinese state media accuses India of trespassing and creating defence facilities on Chinese land whereas India refutes these claims and stresses that it will finish its infrastructure projects and development work as they are not an infringement on Chinese territory in any manner. In fact on 27th may, PM Narendra Modi held a meeting with the defence minister of India, the heads of the three defence arms and the National Security Advisor considering the seriousness of the situation. Although India continues to maintain that it wants to resolve the tension through dialogues and accepts that it has always been a friendly country who wants to maintain good relations with its neighbours, the officials have made it clear that neither will it bow down to any State nor be the one to escalate matters.

MOTIVATION FOR A SUDDEN ENCOUNTER

China and India have not fired a bullet at each other in 5 decades. There have indeed been tensions along the border with the majority of the LAC disputed but both the nations have always been successful in settling their tensions diplomatically unlike at the LOC with Pakistan. In fact, the two countries are home to the largest populations in the world and are all set to change the dynamics of the existing world order. In fact, China and India have had strong economic relations since the 1990s and many analysts believe that together they can achieve the Asian century – The notion that the 21st CE would be dominated by Asian politics and culture.

Therefore, the cause of such an encounter is something that is being hypothesized by all today. China is already under the scrutiny of the world for the outbreak of the coronavirus, the 21st-century pandemic we are all battling today. There have been multiple conspiracy theories floating around with China being in the centre of every one of them and each nation-state is still heavily engaged in controlling the situation in their hands. China’s aim of changing the status quo in Ladakh to its own advantage by coercing India is probably one aspect of the whole scenario. Beijing has always been an ambitious country and not one to back down due to international criticism. But the timing of the state of affairs especially when China’s economy has been wounded itself by the outbreak of COVID-19 does not add up. Especially so as China’s premier BRI that extends across Asia, Africa and Europe thereby connecting the three continents is going to come under serious budget cuts and complications and even temporarily be halted. Hence, even the hypothetical scenario of the escalation of this military build-up into a full-fledged war will not fair well for China as its member countries are likely to see through China’s veil of disguise and identify the treatment China serves India, a nation it has consistently called its friend. This will thus further enhance the distrustful image China has around the world and give birth to new problems for itself. Moreover, apart from this China has enough on its plate –  the probable backlash resulting from its plan of an imposition of a new national security law for Hong Kong, the ongoing human rights violations of Uyghur Muslims in Xinjiang, increased pressure on Taiwan and its turbulent relationship with the US.

However, another aspect for China suddenly manoeuvring its way into the Indian border and make advancements around the globe could be that it wants to pull attention away from the outbreak of COVID-19 and its messy fallouts. Moreover, the current international political scenario between China and the US does create an enticing vacuum for India which it can use to its advantage to exploit china’s economy and leverage what it has to offer. Perhaps this is exactly what China is trying to avoid by pulling India’s attention to her borders to weaken and consequently stall her economic endeavours for the time being.

TRUMP’S OFFER OF MEDIATION AND REJECTION

The US has always known to be driven by its interests and in a conflict against India and China, Washington will definitely side with New Delhi, as Beijing not only challenges the USA’s position of a global superpower but showcases the world an alternate word model that you do not have to be a liberal democratic country to be prosperous. Hence, amidst the Ladakh standoff, President Donald Trump took to Twitter on May 27th and offered the US as a third-party mediator in the entire situation. However, both countries have declined his offer and aim to resolve the issue bilaterally through controlled mechanisms. However, a stalemate continues as has been the case for the past month. China claims it does not pose any threat to India but the ground reality divulges a different tale. While New Delhi is accustomed to Beijing’s unpredictable nature and claims on its territory, its major cause of concern this time is that the Chinese have ventured furtherer than before in a number of areas and have established a presence a little more than they had in the past. This perhaps could be a signal from them, one that all analysts today are trying to decode.

The Chinese are a proud race and one wonders if they will retreat willingly especially under the current state of international affairs where they are largely held guilty for the Global pandemic. It is no mystery that China wants to be the ultimate superpower overhauling the USA and longs for the respect it perceives it deserves from Asia and the world.  Hence, even though the more plausible and practical solution to the military build-up is diplomatic engagement, chances for a minor military clash cannot be dismissed. Both the Asian giants are nuclear countries and even though China’s nuclear capabilities are way more advance than India, it is aware that New Delhi has ICBM’s that can reach its coastal regions. Hence, it would be foolish to risk a nuclear strife and give birth to a new Cold War. In fact, China and India should realise the benefits they can achieve if they work together but Beijing’s activities are pushing New Delhi only closer to Washington, something that will not fair well for China especially under a post COVID world.

Yet, officials from both the countries are under talks and it is hoped that the two Asian neighbours are able to resolve their issues peacefully and preserve the status quo of Asia and eventually the world.