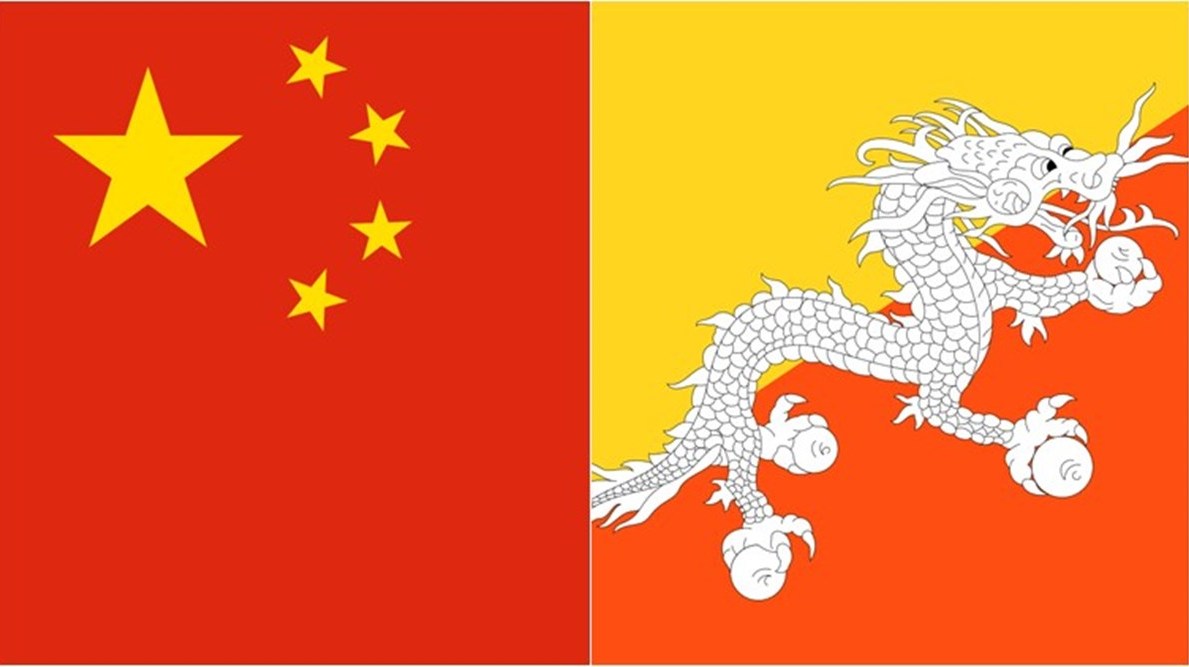 China, which is facing allegations from the rest of the world for spreading the COVID-19, has moved forward manifesting its sharp power strategy and expansionist policy in many parts of the world. After China has shown its muscle-flexing at the Line of Actual Control (LAC) lately, according to sources, it seems like China is now eyeing Bhutan, the land of the thunder dragon as a part of its expansionist policy as per the reports. China has lately been financing bloggers in Bhutan who are paid for anti-India articles. There have been attempts to brainwash the youth in Bhutan and create a pro-China sentiment.

Huddled with snow-capped mountains, Bhutan is one of the few nations in the world to have never been colonized and has preserved much of its unique history, culture and enchantment. But Bhutan’s most important drawback is its cartography that confines its connectivity to India in South and China in the north with no passage to the sea or any other third nation without using either Indian or Chinese soil or airspace. There is an obvious enigma in the China-Bhutan relationship due to the latter’s geographical location that gives it both political and strategic importance in the Himalayan region.

Bhutan has a long tradition of cultural and religious synergy with Tibet and shares a common frontier with China but the land of the thunder dragon is China’s only neighbour, which does not have diplomatic ties. The economic and trade junctions between the two nations are very minimal. The two parties since the 1980s have conducted regular talks on border and security issues to reduce tensions. The 14th Dalai Lama’s arrival to India and the 1959 Tibet uprising made the security of Bhutan’s border with China a constraint for Bhutan. Thousands of Tibetans fled to Bhutan and were granted asylum after which Bhutan subsequently closed its border to China, fearing the arrival of more refugees. Bhutan’s ties with India and China, the two geopolitical, economic and demographic titans are moulded by history and geography.

Due to China’s assertive claims over the territory of Sikkim, Bhutan and Nepal from 1910 and later the spread of the Chinese domain over Tibet Autonomous Region (TAR), Bhutan sought support first from British India and also after the independence of India. China is considering its relations with Bhutan as part of its ‘Western expansion manoeuvring’ that could aid Tibet to regain a pivotal position in the Himalayas region even as Bhutan is cagey about its relations with China and both their perspectives have been different. China already has a border trade with Nepal.

From China’s point of view, recommencing trade with Bhutan is part of an overall strategy in the Himalayas, which has been built in the global setting of the development of China’s western dependencies. The resumption of trans- Himalayan trade is a key component of that strategy. During the occupation of Tibet, China occupied 8 western Tibetan enclaves under Bhutan administration.  A 1961 Chinese map also revealed China claiming territories in Nepal, Bhutan and the Kingdom of Sikkim (Now part of India). There have been incursions by Tibetan herdsmen and Chinese soldiers that pricked tensions in Bhutan. As per official reports by the King of Bhutan to the National Assembly, there are four disputed areas between China and Bhutan. It was in 1988 that the problems for Bhutan started when China sent PLA troops to erect roads and began occupying Bhutanese territory. But the international citizenry never took note of Bhutan’s complaints.

China has been envious of India-Bhutan bonding. For instance, In 2017 Chinese unleashed a military intrusion into Doklam, which is Bhutan’s territory after Bhutan had joined with India in skipping China’s Belt and Road Initiative (BRI) conference. The 73-day frozen standoff between India and China at the Doklam Plateau, the India-China-Bhutan tri-junction shows that India’s boundary with Bhutan is now the de facto border with China, which is a shift of status quo. After the Doklam standoff, there was a slide in Chinese tourists in Bhutan, which foreshowed a sign about Bhutan’s vulnerability. China has had no ethnic affiliations in Doklam but the People’s Liberation Army (PLA) started periodic incursions into the Royal Bhutan Army (RBA) after the Doklam standoff, ordering the RBA to leave “Chinese territory”. Conflicts erupted after China was caught building a motorable road in the disputed area but others blame the destruction of India bunkers by the Chinese army located in the same area. China’s artifice to occupy the Doklam Plateau seems to be inspired by the warrior-philosopher Sun Tzu’s favoured method, a victory through ‘Shi’ (Chapter 5 – “Art of War”) as China approached an area that India least anticipated the PLA to occupy. Though Bhutan declined China’s Doklam claims, China soon published a map claiming that Doklam belongs to China.

China through the Doklam issue and its wooing for Bhutan to join the BRI to strengthen its footprint in Bhutan has many agendas in mind. One such agenda that is little known is the Yadong area, which is adjacent to Bhutan on the east that used to be Tibet region’s largest land port. From the Chinese panorama, such a move will not only advance the economy in Tibet but will also service foreign trade in China’s western areas, such as Qinghai and Gansu provinces and the Xinjiang Uyghur Autonomous Region.

India has been a great comrade of Bhutan and the largest grant donor for Bhutan. In 2018, India and Bhutan commemorated 50 years of diplomatic ties, reminding the world about their evolving bond. India has also been an immeasurable asset for Bhutan by providing a market for three-fourths of Bhutan’s hydropower and also investing in Bhutan to develop its export capability. Bhutan stood by India in the light of its battle with China in 1962 where authorities allowed Indian troop movements through Bhutanese province. During the India-Pakistan war 1971, Mongolia and Bhutan were the first to buttress India’s push for Bangladeshi independence. Bhutan became the first country to be visited during the first tenure of the Prime Minister in 2014 under the “Neighborhood first policy”. Bhutan’s transition from monarchy to parliamentary democracy saw the revision of the 1949 treaty with India in 2007. Though Bhutan has never played the China ticket, in 2012 India’s fury was unleashed when then Bhutanese Prime Minister Jigme Thinley met Chinese Prime Minister Wen Jiabao after the Rio+20 Summit. India countered by withdrawing fuel subsidies to Bhutan.

Lately, there has also been a growing disenchantment amongst the Bhutanese youth because of rising inequality and unemployment; the people have begun to question the ‘grants and loans’ model of development between India and Bhutan. Bhutan’s over-reliance on India and the disillusionment in the economic realm has spilt over to the strategic and geopolitical domain prompting demands for greater diversification in the foreign policy of Bhutan. Even before Prime Minister Modi came to power in 2014, China had done the adequate preliminaries to cut India’s “sacred bond” with Bhutan and then produce a series of political negatrons along the Himalayan range consisting of Arunachal Pradesh, Nepal, Sikkim to Ladakh.

According to historian Tsering Shakya from the University of British Columbia, “Within Bhutan, there is a growing demand to diversify and loosen its dependence on India,” Bhutan seems to be stuck between India and China and has been struggling to assert its sovereignty. As China is looking at wooing Bhutan through the promise of a better future and soft power strategy, Bhutan should take careful note of China’s debt diplomacy in Sri Lanka, Pakistan and other countries before submitting to Red dragon’s temptations.

The Communist China that honoured 70 years of its founding of the People’s Republic of China (PRC) in 2019 stands strong with insecure nationalism, continuing to draw chagrin and criticism from the rest of the world through its sharp power strategies, territorial claims and expansionist policy moves. Further, its anti-coronavirus propaganda proves its insecurity. Bhutan should be vigilant of China’s soft power tactics in reaching out to Bhutan through sports, religious and cultural visits as well as scholarships to Bhutanese students like it has done to many countries in the world.

Bhutan’s topography has imperative ramifications for both India and China. China, which violated the 1988 bilateral agreement with Bhutan by provoking tensions, should consider working together, which affirms on respect for Bhutan’s territorial integrity and sovereignty, apart from maintenance of peace on the border. Both sides should work on forging ties based on the five principles of peaceful co-existence as per the agreement. In the iris of neighbourhood associations, India and Bhutan exemplify the peaceful co-existence of a large nation with a small neighbour. Also, Bhutan can’t easily ignore India’s interests, given the geography and history and also being an indispensable ally of India. India and Bhutan should consider reviewing the Treaty Of Perpetual Peace and Friendship with India keeping China in mind, under which Bhutan agreed, “to be guided by the advice of the Government of India” on foreign affairs in exchange for military support against China. With the Doklam plateau, being the private property of Bhutan’s royal family, it is a unique opportunity for India to establish an Indo-Bhutanese investment in the best interest, to avoid future confrontation with the red dragon. While the Indian determinant will remain a key element in Bhutan’s China policy, Bhutan shouldn’t become a cat’s-paw for China. Pragmatism in contemporary circumstances will prevent Bhutan from undermining its relation with India. Lastly, China that continues to push forward its expansionist strategy in the Himalayan region should move towards a calibrated diplomacy in dealing with Bhutan.