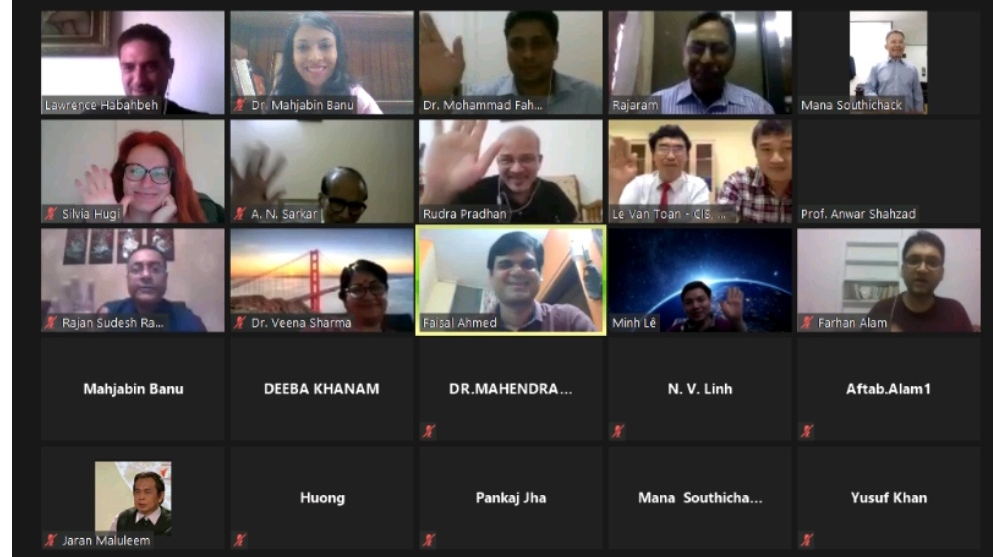 “We look at India as a very good, close friend. We should continue to work to reenergise the bilateral relationship and need to focus on strengthening people-to-people contact”, said H.E. Dato Nazirah Hussain, who formerly served as Malaysian Ambassador to Thailand and as High Commissioner to Sri Lanka and the Maldives. She was speaking at the Video Conference on “India-ASEAN Trade and Geopolitical Engagements” organised by the Society for Policy Research and Empowerment (SPRE), a New Delhi based think tank, on May 30, 2020.

Ambassador Hussain is a distinguished diplomat and has also served in the Malaysian Embassy in China and Singapore. She was also the Director-General of the ASEAN Department in the Ministry of Foreign Affairs of Malaysia. She shared her experiences of participating in the ASEAN-India meetings. She also emphasised that even at the level of leaders, they need to talk directly on contentious issues and resolve them. Ambassador Hussain also lauded India’s role in the pharmaceutical sector saying that India has been the father of generic medicines.

The session was moderated by Dr. Faisal Ahmed, a leading trade and geopolitical expert on the Indo-Pacific, and an Associate Professor of International Business at FORE School of Management. Dr. Ahmed welcomed the speakers and the participants and presented his initial remarks. He said that ASEAN is an economically progressive, culturally vibrant and geopolitically significant congregation. He said that India and the countries of ASEAN share strong civilizational and cultural ties. Dr. Ahmed cited some trade statistics to emphasise on the volume of trade. He mentioned that in 2018-19, the merchandise trade between India and ASEAN stood at $97 billion. The services trade accounted between them accounted for $45 billion.

In his welcome remarks, Dr. Ahmed specifically mentioned some key frameworks including Act East Policy, and also India-ASEAN FTAs in goods and services. He also emphasized that India and ASEAN are mutually important in terms of resources, sea routes, defence, investments, value chains, regional connectivity, and cultural cooperation, as well. Geopolitically too, he said that India and ASEAN are indispensable for each other as they share the Indian Ocean resources and the security architecture therein. Moreover, in the Indo-Pacific construct too, he stressed that ASEAN Centrality plays a strategic role. Dr. Ahmed maintained that both India and ASEAN are strategically and geo-economically significant for each other.

After Ambassador Hussain, the next eminent speaker was Prof. Rajaram Panda. He serves as Lok Sabha Research Fellow and is also a Member of the Governing Council of Indian Council for World Affairs (ICWA). He is an eminent scholar and also served as Indian Council for Cultural Relations (ICCR) Chair Professor at Reitaku University in Japan.

Prof. Panda maintained that India’s relation with ASEAN has a long historical past characterised by civilizational linkages. Talking about security and political dimensions, he emphasised that India is a strong participant in East Asia Summit, ADMM+ and other such institutional arrangements and has been playing a very constructive role. He also talked about the South China Sea geopolitics and said that the Sea has emerged as a hotspot. He stressed that China’s aggressive and assertive posturing in the South China Sea is threatening the security of several ASEAN countries including Vietnam. He talked about the 2016 verdict of the Permanent Court of Arbitration which rejected China’s historical claims in the South China Sea. Also mentioning the nine-dash line, he said that India should not feel shy of coming out in support of the ASEAN countries.

Further, Prof. Le Van Toan, an erudite scholar who serves as a Professor in Ho Chi Minh National Academy of Politics in Hanoi, Vietnam, presented his views on Vietnam-India relations. Prof. Toan, who headed the Indian Studies Centre in Vietnam and has been engaged in several policy levels and Track II dialogues with India, said that the future of India-Vietnam relations will depend on what we do today.

Prof. Toan maintained that so far Vietnam has contributed very responsibly to global affairs. He also said that we need to look into the cultural traditions which have shaped the India-Vietnam relationship over the years. Speaking about a comprehensive strategic partnership, he said that Vietnam already has diplomatic relations with 198 countries in the world, however, it has entered into a comprehensive partnership only with three countries viz. India, China and Russia. He said that the relationship between Vietnam and China is a very sensitive one wherein China puts threat and pressure on Vietnam, while Vietnam has always tried to respond amicably. But as far as India is concerned, he said that among the three comprehensive partners, India is the most trusted friend for Vietnam.

The next speaker was Dr. Rajan Sudesh Ratna who is an Economic Affairs Officer in the United Nations Economic and Social Commission for Asia and the Pacific (UNESCAP) in New Delhi. Dr. Ratna, who earlier served in the Ministry of Commerce and Industry, Government of India for twenty years, including his stint as the Joint Director General of Foreign Trade, discussed his experiences of negotiating the India-ASEAN framework agreement in 2003. He said that the entire Early Harvest Program (EHP) of India-ASEAN Framework Agreement was dropped because India wanted very stringent rules of origin (ROO) from ASEAN, fearing that trade would circumvent from China through ASEAN to India. He also maintained that when we started negotiating the Regional Comprehensive Economic Partnership (RCEP) in 2010, we were of course aware of such issues related to negotiating with China. He believed that perhaps it did not reflect well on our negotiations that in 2019, we were still not ready to join the RCEP.

Dr. Ratna, who served as a Professor at the Centre for WTO Studies in Indian Institute of Foreign Trade, New Delhi, also mentioned that China is the cheapest supplier in the world. If we buy most of our import requirements from other suppliers at a higher cost, our ability to export finished products at a competitive price will also suffer. He gave an example from the pharmaceutical sector and said that the sector is dependent on China for its Active Pharmaceutical Ingredients (API) imports. Talking about services, Dr. Ratna said that the major problem is not market access, but Mutual Recognition Agreement by which qualifications can be mutually recognised by India and ASEAN governments. Also, he emphasised that the supply chain of inter-linking services with goods did not happen between India and ASEAN. For instance, he said that during the 2000s, ASEAN was a manufacturing hub of hardware and India specialised in software, yet a mutually beneficial inter-linking between the hardware and software could not be established.

Presenting a perspective from Thailand, eminent scholar Prof. Jaran Maluleem, Professor of Political Science at Thammasat University, Bangkok talked on several issues ranging from trade to education. He said that since the beginning of the 21st century, the relationship between India and Thailand has enhanced to a large extent. Mentioning the Thailand-India trade agreement, he said that it helped eradicate obstacles to bilateral trade and increased the trade volume between the two countries. He also discussed the positive role played by the industry chambers in both India and Thailand for enhancing bilateral relations.

Prof. Maluleem also emphasised on the historical and cultural relationship between the two countries and stressed the potential for cooperation in tourism, science and technology, investments, strategic and military affairs, and other areas. Being a leading figure in establishing the Indian Studies Program in Thailand, Prof. Maluleem also talked about the educational cooperation between India and Thailand and said that there is a very huge potential for educational exchange and future cooperation in this sector.

Another speaker Dr. Mohd. Faheem, Lecturer, Pridi Banomyong International College at Thammasat University in Bangkok, emphasised on the connectivity issues. He presented his views on the opportunities and challenges of physical connectivity between India and ASEAN. He said that immediately after India embraced economic reforms in 1991, it decided to focus on Southeast Asian countries and adopted the Look East Policy in 1992. Later, the Look East Policy was transformed into Act East Policy. Dr. Faheem further emphasised that Thailand is very strategically located to enhance the connectivity between India and ASEAN. India’s neighbourhood diplomacy, he said, has helped improve focus on sub-regional groups in the region, in which Thailand has a significant role. He maintained that through connectivity, we can improve trade and economic integration, and also enhance people’s mobility between India and ASEAN countries.

During his talk, Dr. Faheem also focused on the importance of engaging youths to enhance bilateral relations. He said that more than half of the ASEAN population is under the age of 35, which provides a good opportunity for future cooperation. Dr. Faheem, who is basically a geographer, said that the two most important geographies pertinent to India-ASEAN connectivity projects are Northeast India and Myanmar. He cited the example of two connectivity projects namely the Kaladan multimodal project, and, the India-Myanmar-Thailand trilateral Highway as being crucial and significant for both India and ASEAN.

Taking forward the deliberation, Dr. Mana Southichack, an international trade economist and Executive Director of Lao Intergro, a Vientiane based consulting firm in Lao PDR, presented his views on Laos-India engagements. He said that Laos is a small, landlocked country, with a population of 7 million. On India-Laos bilateral relations, he said that it has been growing in recent years in economic as well as strategic aspects. He stated that Laos has gradually gained from the establishment of the ASEAN Economic Community. He emphasised that the level of development in Laos has been increasing in recent years at a satisfactory rate. Also, he said that human resource infrastructure in Laos needs to harmonise its system with ASEAN. After joining ASEAN, he said, Laos experienced some changes in trade and investment and it was good for its economic development. As a land-locked country, he maintained that Laos is trying to enhance the pace of its development by attracting investment. He cited an example of a project on high-speed train connecting China. He said that China is 2nd largest trading partner for Laos, while Vietnam stands at third place; and India is 4th largest export market for Laos. He stressed that the economic relationship between Laos and India is good and improving.

Finally, Dr. Mahjabin Banu, President, SPRE, and Visiting Fellow with the Centre for Vietnam Studies in New Delhi, presented her perspective on Vietnam, ASEAN, and India-Vietnam relations. Starting her talk with history and culture of Vietnam, she emphasised that Vietnam carries a good reputation for successfully hosting global and regional dialogues. It has a shown long standing commitment for ASEAN integration. She said that in 1998, Vietnam hosted a ASEAN summit, and called for enhanced cooperation among the member countries.

Dr. Banu discussed about the Hanoi Plan of Action which called for macroeconomic and financial cooperation, harmonisation of customs procedures, and trade liberalisation. She mentioned that the Hanoi Plan of Action also called for enhancing efforts for the resolution of the South China Sea dispute. Specifically, she stressed that if we are talking about the ASEAN region, we cannot escape Vietnam’s concerns about the South China Sea dispute. She said that in recent months, China has illegally entered into the exclusive economic zone of Vietnam several times. She called for quicker implementation of the code of conduct in the South China Sea. Dr. Banu also discussed India-Vietnam bilateral cooperation in the education sector as well as in defence and strategic issues.

After the technical session, the moderator Dr. Faisal Ahmed opened the video conference forum for the Q&A session. It included active participation by delegates and speakers joining from India and abroad including those from Vietnam, Lao PDR, Thailand, Malaysia, Nepal, Jordan, Switzerland, South Korea, Ethiopia, and the United States.

(SPRE may be contacted at spre.india@gmail.com)