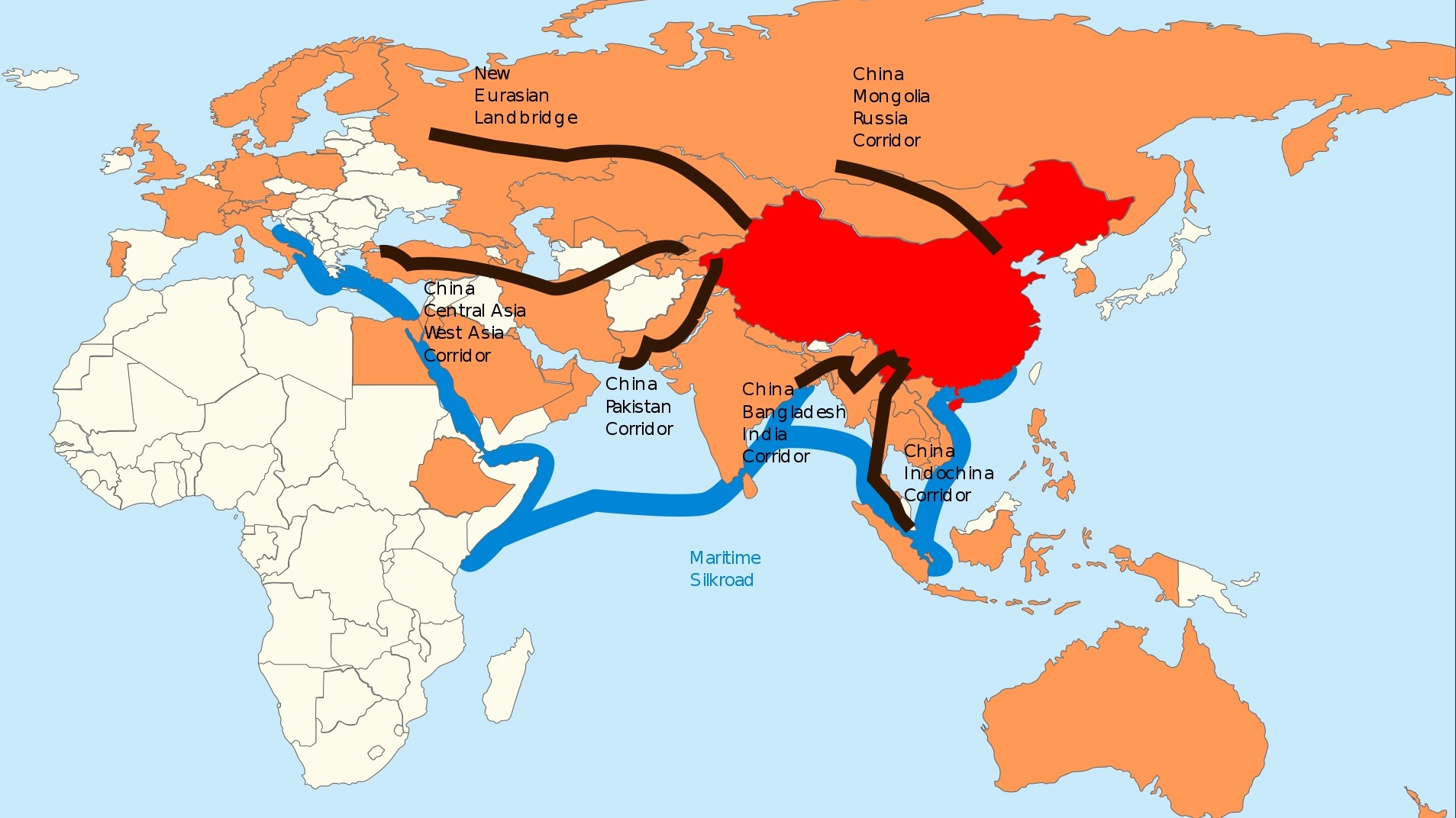 The “Silk Road Economic Belt” is a Chinese initiative to integrate economies of Asia and Europe along the Eurasian corridor with the Chinese economy. The project is ostensibly to enhance trade and connectivity with the Chinese periphery. Silk Route nostalgically invokes the economically integrated Asian and European economies of middle ages during the Han Dynasty of China. The project is proposed through the development of transport infrastructure and communication networks involving railways, roads & fiber optics highways that would connect South Asia, South East Asia, Central Asia, and Europe along an integrated land corridor.

This project, however, has been looked at with both admiration and suspicion by India. India is worried that OBOR project will,

Behind the OBOR initiative, liberal theorists argue that Beijing is seeking to create a positive-sum game in which China and India will mutually benefit through increased trade capabilities, stronger financial institutions, and multilateral economic corridors. This article looks at India joining OBOR from a liberal perspective. The main reason for the argument of India cooperating with the OBOR initiative stems from the Indian initiative which has been done until now to counter the BRI. India has been slow in identifying initiating and implementing a fast approach to connectivity in the region to counter China. The project Mausam, India started and the (The Indian Express, 2017), commitments on building a port in Chabahar and rail-line from the port city towards Afghanistan have been moving at a snail’s pace (Bourse and Bazaar, 2019), Providing connectivity to the north-east through an Indian built port at Sittwe in Myanmar is half-done, as the final road link into Mizoram still needs to be done (Rajiv, 2018), and the partnership of quality infrastructure project, a Japanese initiative on which India joined to counter China still needs to achieve its targets. India needs world-class modern ports, capable of receiving the largest vessel which can attract international shipping lines and is essential to accelerate “Make in India”. The article doesn’t put forward the opinion that all these Indian initiatives are not working but its pace should be increased otherwise it risks losing neighbours to fast building Chinese infrastructures and their easy loans, if the new airports at Delhi and Mumbai had been built some 25 years ago, perhaps Singapore may not have so easily become the airline hub of South Asian periphery. In this regard, India should reconsider the fact of joining the OBOR.

India considers CPEC as a threat to its sovereignty but however development of the Gilgit Baltistan region would reduce security threats in India. Not only that, India’s involvement in rest of BRI enhance her influence in the decision-making to construct the CPEC along the lines which are suited for both India and Pakistan, being a part of CPEC would enable India to direct trade in the oceans to a larger degree which has not been able to do with the existing infrastructure (Joshi, 2017). India must, therefore, consider economic reconnection with Pakistan while keeping the political issue running on a parallel track. China was willing to negotiate with India by renaming the project but as the Indian response delayed it withdrew its statement (Economic Times, 2018). Realization of CPEC is important as a stable and economically strong Pakistan is necessary for peace and prosperity in the region besides if India joined CPEC, it could have gained access to the POK region.

When it comes to BCIM (In 2015, China proposed including the corridor as part of its vision for the BRI), India is already on board, at the heart of BCIM is a route connecting Kolkata- Kunming that crosses Bangladesh and Myanmar (The Economic Times, 2019). The main focus of the corridor is to facilitate trade and connectivity between the underdeveloped and landlocked parts of north-eastern India and south-western China. The BCIM can play an important role in energy trade, development of tourism, tariff-free trade and moreover it will help in the development of tourism, tariff and free trade. Similarly, CPEC will also help India, India should join the project as it reduces India’s energy import transportation cost, strengthens India-central Asia connectivity (access to the vast resources and market of the Central-Asia) other than through the Chabahar Port and finally will help to monitor and influence,

If India decides to stay out of CPEC-OBOR it may hamper India’s economic growth, especially in the current scenario when the country’s GDP is going down. China will craft a framework for trade and architecture between the BRI countries which will not be favourable to India. India would lose strategic space to China whose influence in the BRI nation would increase with a rise in economic cooperation. Now the fact is that China will anyhow increase its presence in the Indian borders with India being a part or not, then why not join it and alter the plans as favourable to India. If BRI is built, China will become a preferred destination for countries seeking investment and trade and the trade gets diverted from India. Thus India’s relation with neighbours will deteriorate and India will lose its bargaining power as a major power. The question is, if India is a part of AIIB the bank that supports OBOR then why not the project itself. Reports suggest that in the long term AIIB will pressure India to join the Chinese initiative to get loans at a much cheaper interest rate, why should India wait for the pressure to be exerted. Indian commercial banks are already suffering due to weak balance sheet and credit risk, once lost opportunity won’t come back (Bhoothalingam, 2016). Now the BRI can become yet another platform after BASIC (Brazil, South Africa, India, and China) and BRIC (Brazil, Russia, India, China) to build trust and stability. This could alleviate bilateral issues such as border and river sharing problems between the two countries and also India could also use its presence in BRI as a negotiating tool for India’s entry into NSG (Nuclear Supplier’s Group).

The article simply doesn’t contend that cooperating may lead to a win-win situation for both sides but it asserts that cooperating may lead to a better more favourable term for acquiring benefit for economic growth and connectivity by providing a space for India’s involvement in decision-making, influencing other members in the region, to prevent itself from being isolated once all its members are in the project, preventing China from further encircling India in its own neighbourhood. It is better to be in the game and moderate it rather than to be out and make a far cry over it but also at the same time India should be worried about its neighbour in terms of its national security. India joining OBOR doesn’t mean India is accepting China as a hegemonic power in the Asian region, but instead, the country is trying to create a level playing field so as to keep it in a better bargaining position with China and to monitor the security threats arising from the Gilgit Baltistan region. The BRI is particularly important in terms of increasing protectionism happening across the world, India has to cooperate with China economically by participating in OBOR if it seriously wishes to increase economic growth and tackle unemployment. However, the success of the BRI is dependent on how China manages its debt and addresses the issue of transparency.