Geopolitics of Kalapani Dispute: Who Bells the Cat? 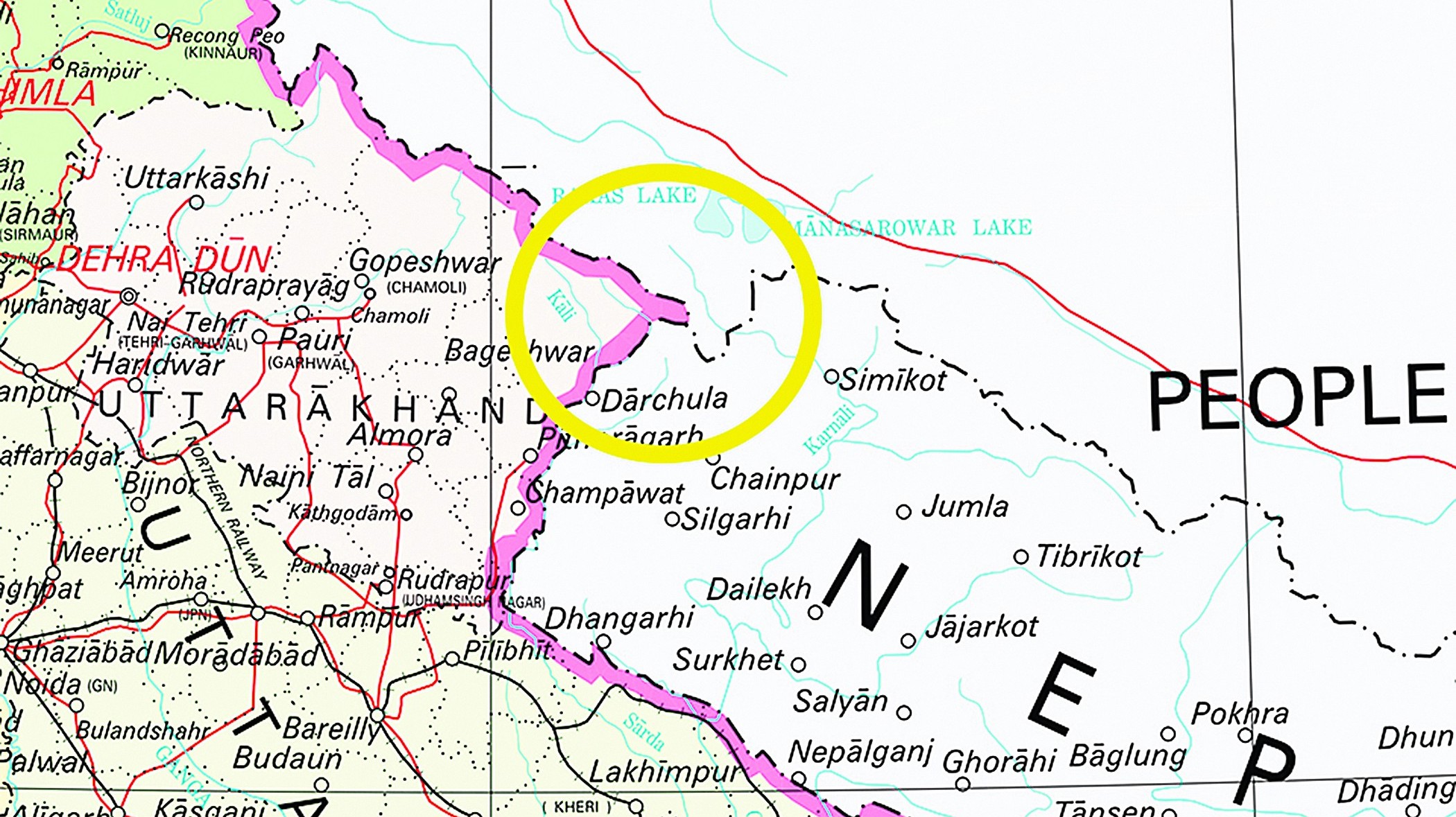 When the dark sky continues to be covered by the dreary clouds of the pandemic it is very unfortunate that the Indian subcontinent is on the cusp of another tassel centering on an old dispute upping the ante against India when the toll of her infection has surpassed the record of China, the epicentre of the COVID-19 crisis. It relates to India-Nepal duel owing to diametrically opposition position of both sides on Kalapani and Lipu-Lekh Pass. What is very significant to notice in the recent episode is the timing of its fomenting by the Nepali side which causes considerable concern because it seems Nepal, however, moved by the territorial claim, is not probably raising its own independent voice; rather it may be made to act perforce under the provocation of its northern neighbour. This is what becomes conspicuous from the statement of India’s Army chief Manoj Naravane. Recently he has been quoted saying that there is no “contradiction at all” in the new road constructed via Lipu-Lekh pass up to the Line of Actual Control (LAC) to shorten travel time for Indian pilgrims going to Kailash-Mansarovar, and Nepal may have raised the issue “at the behest of someone else” (The Hindu 15 May 2020). It, therefore, seems no surprising move on the part of Nepal but an underwater plot hatched well in advance to be used purposely at this moment of vulnerability to put pressure and target India alone when the nation is struggling hard to mitigate a grave health emergency. The suspicion gets apparently confirmed since Nepal remains completely quiet on China even though both China and India have been “referring to Lipu-Lekh Pass as one of their trading points since 1954” (Jaiswal 2017).

No doubt, it may be a failure of India’s strategic thinking or maybe a resurrection of lingering dissent from the Nepali side since our previous coercive economic blockade in 2015 that dealt a heavy blow to Indo-Nepal relations. But then there is no gainsaying the fact that Nepal has experienced the persistent intrusion of western and Chinese influence in various sectors of its public policies. The only difference is that while western liberal interests are interested to exploit soft issues of Nepal viz. human rights, child rights, women’s rights, the Chinese would be more likely to provoke Nepal towards nudging hard issues of sovereignty claims against India.

Another concomitant factor which has the potential to transform the issue by negatively affecting Indo-Nepal relations lies in what Johan Galtung observed as ‘negative peace’ or the tendency of the Nepalese that they are good at negative forms of resistance or “petulant stubbornness” which might unleash serious and severe trouble for India’s vision so far as regional plans of connectivity or pushing for strengthening investment-led infrastructure development in South Asia is concerned. Although we don’t think the Kalapani issue is that intractable or that here China would have same ‘strategic opportunity’ as it has over the South China Sea, it is still a matter of worry because China would always be interested in stoke flames of anti-India bogey in Nepali society in hope to foment unrest so that it can catch fish in troubled water. The raking of the Kalapani issue by Nepal at this crisis-ridden juncture might also be a Chinese proxy to pressure India not to navigate too deep into the Indo-Pacific belly where India seeks to engage itself by extending medical assistance to small island states as the COVID-19 crisis is intensifying. Some commentators were optimistic about a positive turnaround in Indo-Nepal relations after the landslide victory of NCP in the 2017 election in Nepal bringing in K P Oli as the Prime Minister with the non-aligned approach. Meanwhile how far Nepal could really be won over from its pro-Chinese stance is a matter of debate. The current agitation on the Kalapani issue is a clear pointer of the surmise.

Now let us briefly delve into the issue from the perspective of South Asia’s topographic and socio-cultural characteristics. The countries of this subcontinent differ from each other in various respects within an overall harmonious mosaic. Such a difference in the notion is a fundamental pillar of their competing national interest pitted against each other. Sometimes it influences the socio-political scenario resulting in the outbreak of intermittent and internecine conflicts. In spite of such differences, they follow a typical classic doctrine of nationalism and sovereignty at every nook and corner within their national entity. Obviously, the border area acquires much sensitivity. De facto, this is the root of competing for territorial nationalism. The Kalapani dispute, that has emerged recently mainly between India and Nepal, is a much-debated issue in this context.

The Kalapani is a plateau-like tri-junction among India, Nepal and China including the Lipu-Lekh Pass. This pass is not only an international economic corridor but also a passage for pilgrims and their movement towards the lake Manas Sarovar and the Kailash Mountain. This sacred place is traditionally considered to be of great significance for different religious faiths that sprang from India, hence its religious significance goes beyond the economic approach. The Lipu-Lekh Pass is one of these ways.

Since 1768-1769 A.D. Nepal is carrying on its crucial role as an independent buffer country between India and China. However, in the post-globalization period, a tendency towards territorial nationalism is raising its head both a sort of reaction and at the same time, it might create a sort of assertiveness on the part of Nepal. In his ‘organic theory of the state,’ Ratzel opines that every state wants to extend its area. It represents the view of the areal extension of assimilated nationalism. Every country, by and large, follows the theory by any means. Thus, the determination of boundaries is a very crucial factor in this concern. Nepal negotiated its north-western border with India considering the Sarda or Kali or Mahakali river as their international boundary with ‘The Treaty of Sagouli, 1816 A.D.’ India is just continuously following the treaty. China also nodded to the fact. According to the document, west of the river belongs to India, and east of the river to be owned by Nepal. And China possesses the north-eastern bank of the river.

Determination of boundary is a political issue and often political interest-driven negotiations act as a spur to augment the importance of the river manifold. Of course, any river can be treated as a marker of the distinct political border but the problem arises due to the remarkable natural shifting of the river. This is the base problem of the Kalapani dispute.

Lipu-Lekh is another aspect of the problem of the same dispute. It has been stated that the Lipu-Lekh joins India and China via Nepal. The Lipu-Lekh route leading to the Manas Sarovar via Kalapani is not a new route. Previously pilgrims used to trek towards the shrine through this track. India has developed the Manas-Kailash road and constructed an 80 km all-weather motorable road by India’s Border Roads Organization from Ghatibargah in Uttarakhand to Lipu-Lekh link road. With the inauguration of the road now it seems the hidden opposition by Nepal against India is coming to the fore. Apparently, however, the new construction does not warrant any dispute since it falls within the western part of the Kali river; astonishingly Nepal is crying foul for political gain.

It can be noted at this point that the accessibility of the region from the Indian side eventually has been increased due to this development and India can be said now to achieve some advantage by the road construction to sustain strategic Indian control at Kalapani. With the publication of a new political map of India by the Survey of India in 2019, delineating the boundary of the Ladakh and the Jammu & Kashmir, this dispute sprang again to occupy the centre-stage of Indo-Nepal relations. In this situation, Nepal is raising its card of protest with some logic as a buffer state. However, the Surveyor General of India has clearly stated that the international boundaries of India have remained unchanged. So, the question of agitation does not arise. But it seems Nepal finds itself under some compulsion to rake up the issue and it indicates how emotive the issue from the aspect of Nepal is.

However, 98% of the border issue between India and Nepal has been resolved through diplomatic dialogues. But, the said issue is yet to be resolved through dialogue and it has every chance to embitter Indo-Nepal relations because ultra-nationalist groups of Nepal could highjack the issue. India and Nepal share a deep friendly bilateral relationship. International trading or business between India and Nepal is also widely acclaimed to be of traditional international trading. Even the ports of India feed Nepal round the year.

Nevertheless, they also have experienced a phase of a bitter scuffle in 2015 when the proceedings at the land transit points of Indo-Nepal border got interrupted. This apart, relations between the two sides (India & Nepal) have been strained since 2015, following India’s opposition to Nepal’s newly promulgated Constitution and subsequent imposition of an unofficial economic blockade. Kathmandu too has tried to reduce its reliance on India through outreach to China. India has historically been Nepal’s most important diplomatic relationship. In that sense, the present problem is not an exception although it feels awkward after a very meaningful visit to Nepal by India’s foreign minister S Jaishankar in August 2019. According to some experts, as the present government of Nepal follows communism, it has a natural bias towards Chinese orientation. Still, it should not be a too big issue to pose a cold war-like syndrome in India-Nepal relations.

Recently the Chinese and Indian army personnel had a scuffle with each other at the Sino-Indian border of Sikkim (surrounding Nathu La pass). So the probability of covert Chinese influence in Kalapani matter cannot be totally overruled. Interestingly according to another report, China has claimed that the tallest mount of the World Mt. Everest is under their territory. Though, in fact, it is situated at the border of China and Nepal. Nepal has reacted in this regard. It indicates Nepal’s stake as a real buffer state, which should stand firm in the middle position to sustain her independent say.

Amidst the present crisis-situation of the Covid-19 pandemic, lockdown is a survival strategy while the global economy is gasping for breath and our mother earth is losing her children due to pervasive infection. It is not the prime time to quarrel for the little common passage. Presently it seems advisable to maintain status quo ante in this Kalapani dispute with the interrupted continuation of the international trade-transport and communication till both India and Nepal join meeting in the post-COVID phase for finding out an amicable settlement of the issue. Otherwise, the border issue has the potential to catalyse the adverse reaction of the pandemic. Therefore, the future of the relationship between India and Nepal stands at a precarious junction and it depends on years to come.

1 reply on “Geopolitics of Kalapani Dispute: Who Bells the Cat?”