Arctic Governance: The next geopolitical competition in International relations 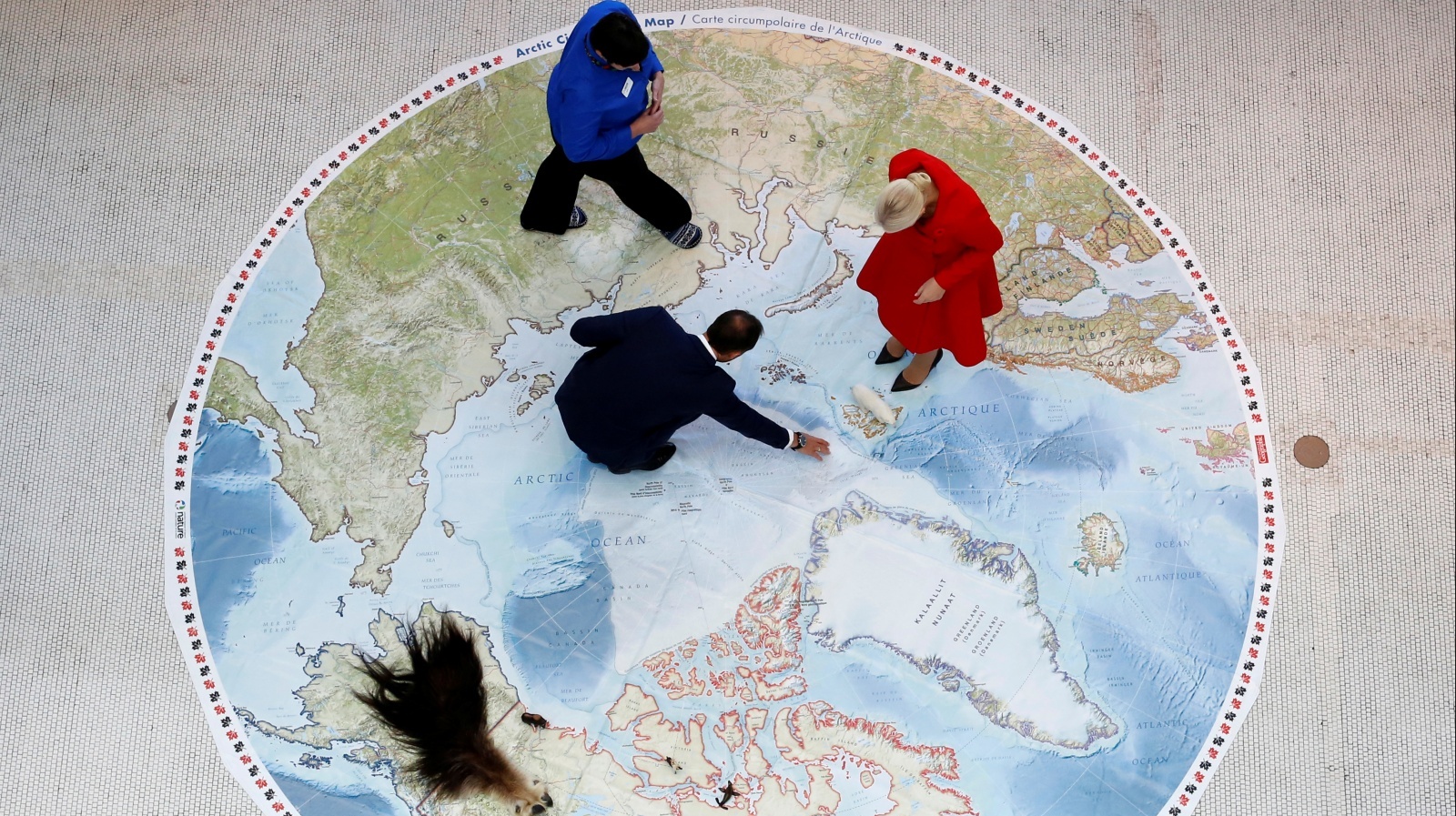 Even as the world is still grappling post COVID-19, China with its brinkmanship in the South China Sea and its presence felt in Antarctica, has recently lashed out incandescently with the U.S for an Arctic power grab. There have been rising tensions lately between China and the U.S due to the former’s increased presence to counter the later. A new Sino-American bipolarity has unfolded in the Arctic. The red dragon is trying to increase its economic leverage in Iceland and Greenland. Though China’s Arctic Policy of 2018 pledges for co-operative governance and a vision for “Polar Silk Road” as part of the Belt and Road initiative (BRI), its sturdy belief in freedom of navigation and ambitions of becoming a polar great power have been met with suspicion by other countries. China has been active in the development of the northern sea routes and is looking to make investments in the region.

With finite planetary climate boundaries, the Arctic region is considered to be an international weatherglass of climate change. There has been inception of new nautical routes and a rise in the melting of ice sheets in the arctic since the last few decades, which is considered to be a fragile ecosystem. An acclaimed U.S scientist Mark Serreze had concluded, “The Arctic is screaming.” in 2007. Unlike Antarctica, the Arctic region is not free from territorial claims and counterclaims. The Antarctica Treaty of 1959 limits the use of its land for peaceful and scientific purposes. The temperature in the Arctic is increasing at the rate twice the global average. Between the years 1979 and 2015, the surface ice in the arctic decreased by 4.7% per decade and the thickness of the sea ice diminished by 10-15 %.  By 2030, the region is expected to become a forcing horse for energy expansion and maritime missions and by 2060, rising sea levels and global warming due to release of greenhouse gases can result in complete ice melt that can have serious repercussions on the food chains and impact the flora and fauna of the region.

Globalization has also altered the region due to commercial activities and research. It has aided the economic development of native communities but has swelled the commercial pursuits that endanger the life and traditions of the native population who are trying to preserve and protect the region. The same native population of the region, in the late 1980s, were on tenterhooks on the environmental situation by non-states, demanded and forced the governments of the Arctic states and environmentalists. This lead to synergy for the Arctic environmental protection strategy known as the “Rovaniemi declaration” signed in 1991. Through the Ottawa declaration, in the post-cold war age, a move towards collaborative orchestration to manage the delicate region led to the establishment of a high-level intergovernmental body “Arctic Council” in 1996, to stimulate coordination, co-operation and association among the Arctic states along with the native Arctic inhabitants for sustainable development and environmental protection. The council has proven to be snowballing in policy-shaping of the region. Environmental wardenship through Arctic governance has become the need of the hour to preserve the region. From a security and foreign policy panorama, the region has continued to serve the national interests of the countries.

Various countries, non-state actors and international institutions have begun to explore different perspectives with regard to the arctic governance that could provide solutions in addressing the geopolitical, sociocultural, environmental and economic obstacles in the arctic.  On the other hand, it has also lead the way to Arctic gold rush with nations locking horns against each other to exploit and assert on the natural resources in the region that contains 22% of the global natural gas and oil reserves. The melting of ice sheets has acuminated the appetite of the energy-hungry nation-states for the natural resources in the region, which also includes rare earth and precious metals. The Arctic region in the 21st century has become an area for geopolitical competition and power.

Arctic development was uncommonly active during the Soviet era after the Soviet Union became part of the Spitsbergen (Now Svalbard) Treaty in 1920. Contemporary Russian territorial claims date back to 1926, but the following claims applied only to islands and lands within the region. Russia first signed maritime boundary agreement with Norway in 1957, though tensions erupted between the two in the 1960s. Soviet was a figurehead in the Arctic exploration in the 20th century but after the Soviet disintegration in 1991, Russia began to revitalize its interest in the region almost two decades later. The goal of “Arctic policy of Russia” that is part of its foreign policy is to make use of natural resources, protect the ecosystems, ensure the region remains a zone of co-operation and peace. At present Russia maintains a military presence in the Arctic and plans to build up the coast guard presence. It has recommenced its old military bases and remodelled its robust northern fleet that consists of strategic nuclear assets.

China’s entry into the region can be highlighted because of its friendly ties with Russia along with technological and economic co-operation. China too joined the Spitsbergen treaty in 1925 but began its Arctic expeditions only in the late 1990s with geopolitical ventures in mid-2000s. Through the Belt and Road initiative (BRI) put forth by Chinese President Xi Jinping in 2013, China has increased its presence in the Arctic region through the Ice Silk Road to Europe and has been swaying for power by taking advantage of Russia. Due to Russia’s geopolitical isolation and a greater economic, technological and financial divergence between China and Russia, China has been taking advantage of the right timing and situation.

This situation has also lead to a great game rivalry between China and the United States. China has been playing its trump card, exploiting the Arctic resources by building massive polar icebreakers “Snow dragons” named Xuelong 1 & 2 and subordinating Russia inch by inch in the last few years, While India has no icebreaker ships yet , United States has two heavy icebreakers. Russia has 40 icebreakers out of which 27 are ocean-going icebreakers, some of which are nuclear- powered. The imbalance power and the race among the geopolitical powers are clearly visible with the numbers of icebreakers by leveraging their dominance in the Arctic.

To maintain the balance of power, the decision-making process and engagement by middle powers such as India, the United Kingdom, Canada, Japan, France and Australia can have direct or indirect geopolitical ramifications in the Arctic. U.S must also consider engaging NATO for better Arctic Governance through the NATO Defense Planning Process. Though U.S has shown a commitment to environmental and scientific research by signing a treaty in Arctic 2017, due to withdrawal of the U.S from the Paris climate agreement, under the Trump administration, new uncertainties have surfaced for further collective action.

India’s association with the Arctic dates back to nearly nine decades when it signed the ‘Svalbard’ treaty in 1920. India’s interests in the region has been commercial, strategic, scientific and environmental which has also been advocating for further developments in the region because of the new elbow room and obstacles emanating from the world community due to global warming. India launched its first scientific expedition in the region for environmental and research purposes. India was also granted the permanent observer status in the Arctic Council at Kiruna in 2013 and has shown great commitment to the National Centre for Polar and Oceanic Research.

India already has immense expertise due to its conglomeration with the Antarctic Treaty System to play a productive role for stability, safety and security in the Arctic. India as part of the Arctic governance framework has made substantial efforts in scientific research, investments and projects. Being a powerful champion of international nuclear disarmament, India can play a vital role in promoting the idea of a nuclear free Arctic. The proposed route from Chennai (India) to Vladivostok (Russia) shows India’s involvement in the Arctic to hedge against China and limit its presence. India should also refurbish historical ties with Russia for future involvement in the Arctic and must also advance its diplomatic channel efforts by collaborating with Arctic countries that hail India presence. Norway is a great example, being a critical partner of India. India-Norway vision 2030 is indeed a great step forward.

Every nation should co-operate to address the preservation of biodiversity and ecology, reduce marine acidification and prevent marine pollution in the region by promoting sustainable fisheries. The nations should have their regulatory agencies that can steer transparently and move forward to co-ordinate with the respective rules and regulations.

In order to prevent environmental incidents such “ Exxon Valdez” oil spill or the Odyssey oil spill in the Arctic, Governance and regulatory framework conventions and treaties such as the ilulissat declaration, The United Nations Convention on the Law of the Seas (UNCLOS), The International Convention for the Safety of Life at Sea (SOLAS), Prevention of Marine Pollution (MARPOL), Conservation of Arctic Flora and Fauna (ICRW), The Barents Euro-Arctic Co-operation and the Arctic: Territory of Dialogue Forum must ensure and facilitate the stability of the environment in the region. Revamping of the Arctic Chiefs of Defense Staff Conference that has remained stagnant since 2014 through continued Colloquy can intensify the management of regional security issues.

Even as the geopolitical developments in the Arctic region poses an obstacle, disrupting the traditional pattern of Arctic governance, there is a need for stronger bilateral and multilateral governance mechanisms, significant respect for international law and institutions, trust in the region, civil-society collaboration and robust ties amongst the Arctic countries that can help, play a vital role in the functioning of a flourishing and clean Arctic.

The nation-states should undertake a consensus-based decision-making process where Arctic governance must be based on jurisdictions of Arctic nations, respect for sovereign rights, and concerns of the non-Arctic states. As the geopolitical competition intensifies in the Arctic region, balance of power, political and environmental stability amongst the nations is requisite in international relations in the long run.

1 reply on “Arctic Governance: The next geopolitical competition in International relations”