US-Taliban Peace Deal and its Implications for Central Asia 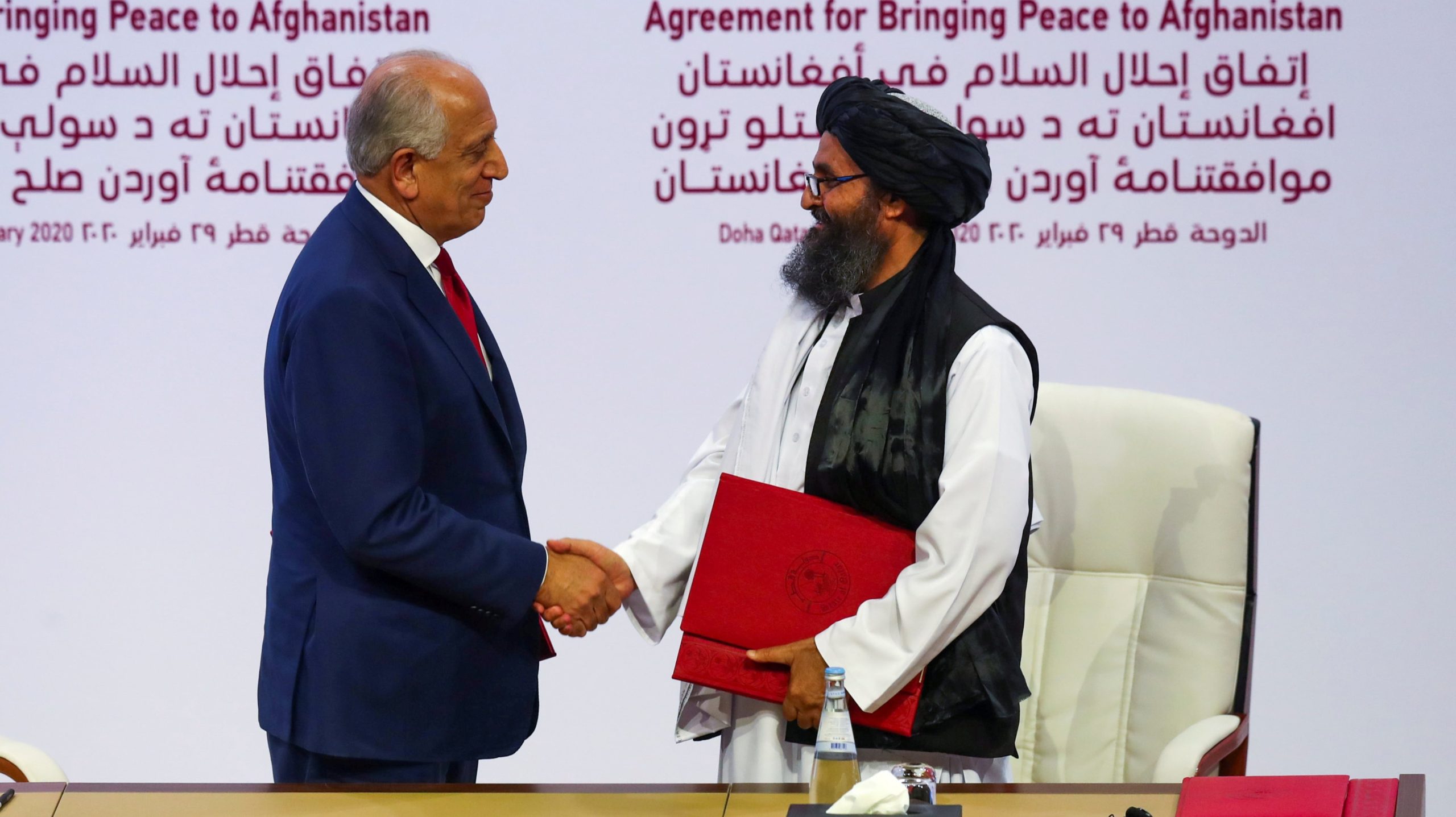 The Agreement for Bringing Peace to Afghanistan was signed by the Taliban and the United States of America on February 29, 2020. This is the first agreement of its kind between the two adversaries, which put an end to the longest war in U.S. history. The U.S. war on terror began with the September 11 bombings in 2001 and has continued to get brutal as the years passed. The agreement was signed in Doha, the capital city of Qatar. The chief American envoy, Zalmay Khalilzad, was the signatory authority from the U. S. side while current deputy Mullah Abdul Ghani Baradar represented the Taliban. After the agreement was signed, the room echoed with applause, with the Taliban being at an advantage side. The deal includes the exchange of prisoners between the Taliban and the Afghan government and the withdrawal of U.S. troops from Afghanistan over 14 months. The Taliban has also agreed to put an end to ties with Al-Qaida and other terrorist groups, which have been its known allies for years. The U.S. has pulled its troops from Afghanistan before but in unilateral moves. However, this time, with the support and cooperation of all the parties involved, the war in Afghanistan possibly will be stopped once and for all.

The agreement is said to have potential only if all parties involved cooperate and follow the terms set. The U.S. has set conditions of the deal based on intra-Afghan cooperation between the Afghan government and the Taliban. However, there is a lot of apprehension among people, especially the people of Afghanistan, about the deal. Many believe that the Taliban walked away with more than it offered and that after the withdrawal of the U.S. troops, the Taliban could back out of the deal and easily take control of the country. The people of Afghanistan also do not trust the Taliban because they killed thousands of Afghan people in their fight to take control of Afghanistan. The Taliban’s disregard for the Afghan government, which it considers ‘a puppet’ of the U.S., also put an uncertainty on the Taliban’s adherence to the peace deal.

Most people believe that the agreement serves the interests of both parties. While U.S. President Donald Trump may want to bring home U.S. soldiers in a bid to earn more votes in the upcoming election, the Taliban could use the pulling out of the deal by the U.S. as an excuse to take over Afghanistan. The talks between the two signatories began over a year ago without involving the Afghan government. In September 2019, after the draft was formed, the U.S. called off talks because of the killing of an American soldier by the Taliban. However, they resumed talks within weeks and eventually signed the deal. The U.S. agreed to seek the release of 5000 Taliban prisoners held by the Afghan government by March 20 and the remaining within the next three months. The U.S. also agreed to refrain from interfering in the domestic matters of Afghanistan and would help get the U.N. sanctions against the Taliban removed. On the other hand, the Taliban has agreed to a cease-fire against American troops and to begin talks with the Afghan government.

The signing of the peace deal is seen by many as a victory of the Taliban over the Americans. This will probably be used as propaganda by terrorist groups claiming that the Taliban defeated the Americans and forced them to leave Afghanistan. This may also inspire other jihadi groups to take up arms against their states and governments. This could lead to problems far beyond the borders of Afghanistan and Central Asia. The signing of the deal was celebrated among the Central Asian terrorist groups who congratulated the Taliban on their victory. Tajik militants of Jamaat Ansarullah (J.A.), Uzbek groups like Katibat Imam al-Bukhari (KIB), the Islamic Jihad Union (IJU), Katibat Tawhidwal Jihad (KTJ), and Uighur fighters of Turkestan Islamic Party (TIP) from China’s Xinjiang region expressed their views through their Telegram accounts. The KIB congratulated the Taliban calling it the victory of the “Islamic Ummah”. A KTJ propagandist’s Telegram post read “today is a great day for entire Ummah because, after the 18-year war in Afghanistan, America humiliatingly acknowledged its defeat from the Lions of Islam”.

On March 15, jihadists of KTJ threatened the states of Central Asia through their Telegram account stating that “soon the Shaitan regimes of Central Asia will burn in the flames of Jihad ignited in Afghanistan and defeated America considering it omnipotent.” This was in reaction to the Uzbek Foreign Minister stating that Uzbekistan would stay out of the internal matters of Afghanistan. The reason for this aggression and delight at the win has a lot to do with the strong ties with the Taliban and the Al-Qaeda because of their common agenda of creating an Islamic State governed by Sharia law in Afghanistan and Central Asia.

One of the major points in the deal might cause a problem for the groups’ celebrating the deal in the favour of Taliban and expecting the Taliban’s support. According to the agreement, the Taliban must cut all ties with Al-Qaeda and other terrorist groups to ensure that Afghan soil would not be used against the interests of the US and her allies. However, the enthusiasm of the other groups of Asia seems to convey their confidence that the Taliban will not cut them off. The belief of the groups in their allies stems from the Taliban’s long fight against the Americans and their devotion to the Islamic brotherhood. The jihadist’s focus seems only to be on the Taliban’s return to power in Afghanistan and the establishment of their dream, an Islamic State following Sharia law. If the Taliban decides to stand with these groups, the U.S. could pull out from the deal blaming the Taliban for breaking it. Thus, it would come out as the deal has inspired the radical Islamists in Central Asia and encouraged them to raise their arms against their secular governments which defeat the American cause of freedom and democracy.

The agreement between the U.S. and the Taliban is a milestone in Afghanistan’s history and its road to development and peace. The agreement has already had a few ups and downs and will continue to do so. The Taliban had made efforts to work with the Afghan government while the government has released Taliban prisoners. However, the violence has continued even after warnings by the U.S. government to the Taliban. The Taliban seems to have discovered a secret weapon, violence, which it uses whenever the other side slows down or refuses to agree to their demands. The Central Asian countries are still relatively safe from terrorism but must keep an active watch as the deal has major implications on the rise of terrorism in their region. The jury is still out on how the deal will turn out, whether it will lead to peace and the de-escalation of the conflict in Afghanistan and the neighbouring regions or lead to more violence and war for the people of Afghanistan. However, the bloody history of Afghanistan over the past four decades, the Taliban’s killings of Afghans, the American involvement and self-interest in the region indicate that the deal might not be able to bring peace to Afghanistan. The world can only wait and see as both the parties play their cards hoping to beat the other, an 18-year-old game that is still going on.