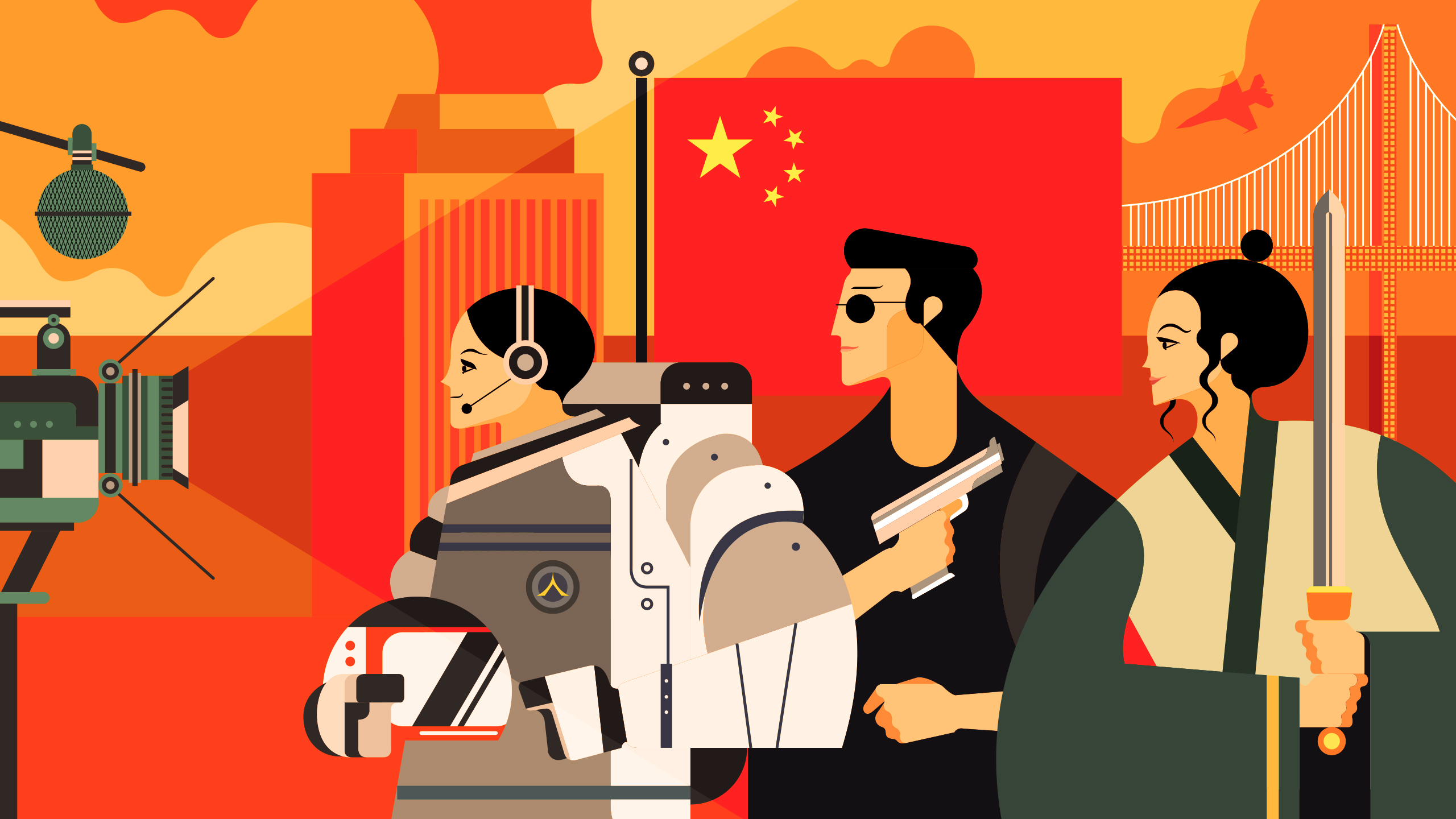 If there is one thing we can learn from the Xi Jinping led Chinese Communist Party (CCP), it is how to manipulate existing sources of information into making them portray China as the benevolent leader; a patriotic state willing to protect its citizens against the perils that ail the “Western” world. For a long time now, the Chinese state has had but one purpose – to control how domestic and international markets narrativise the nature of this state. This is done through intensive state-backed military, technological and economic exercises, with no use of Soft-power, whatsoever. Herewith, I discuss how the CCP exercises nationalism as an ideology to cater to the masses, along with the past and the processes that have led to the successful implementation of this propaganda.

A Brief History of Propaganda in China

Seventeen years after General Mao Zedong came into power in China, the infamous “Cultural Revolution” was launched in the East Asian nation as a means for Mao to reassert authority, and to create a China that had the “Red Guard-ism” ideology at its core. The Red Guards were a group of youth militants, backed in great zeal by “Chairman” Mao, who were charged with the responsibility of disrupting capitalist and bourgeois ideas from a pre-Communist China, leaving behind a Communist system that favoured the poor and the labour. Over a gory period of ten years (from 1966 to Mao’s death in 1976), the Cultural Revolution focused on finding enemies of Communism among the populace, often resorting to extremely violent methods of uprooting these enemies and their ideals. But the propaganda of nationalism was of utmost importance for Mao in order to create a sentiment of counter-revolution against the bourgeois in the hearts and minds of people. Subsequently, we see the emergence of Agitprop methodology for propaganda – a large number of spirited posters depicting soldiers, labour-classes and industrial workers, paintings depicting marvels of industrialisation (such as towers and bridges) embedded in scenic landscapes, and publications that were distributed by the government as essential reads. These essential reads, also known as “Red cover” books, talked about how anti-capitalism will return China to its former glory, and how faith in the actions of the Mao-government will make this possible. An example of this is a book called “Red Crag”, which talked about underground communist fighters battling against the Chinese Nationalist Party, Kuomintang. Ironically, it was this rise in writings, debates, paintings, posters and journals, that formed the undercurrent for dissent and the fall of Communist ideology in China, leading consequently to rising disappointments in the Cultural Revolution and the propagandist policies of Mao.

With the gradual dissolution of Communism as an ideology in China amidst Cold-War tensions and a general feeling of mistrust against the leadership in China during the 1980s and 90s, the Chinese state ideated upon the famous framework of “Patriotic Education” to help succour support of the population. By projecting China as an entity threatened by western powers (particularly the United States and Japan), the state wished to legitimise its own authority while embedding the feeling of nationalism within the people. The state had been quick to realise that the fall of Communism as an ideology was inevitable, and so it set out a course to lead a nationalist country under a Communist name. The implementation of this course became even more necessary post the Student-led Tiananmen Square protests of 1989, which revealed a side of China that was impoverished, and deeply upset about the way the Communist government was making the economy function.

Over the years, this Patriotic Education targeted young audiences and gradually explained to them the two narratives, that are historically very relevant in China even today. The first narrative explained how in their study of national history, the youth must see China as a country that was besieged and polluted by imperialists, which was the story of its “victimisation”. The second one recounted as the “Victor” narrative, explains how China was successful in safeguarding itself against this imperialistic onslaught and had emerged as a winner of national independence. In this light, people saw events such as the hosting of the 2008 Olympics by Beijing and the sending of two manned spacecraft by China into Space (in 2003 and 2005) as ideograms of solace for the historically humiliated country. Hence, it is no surprise that today, a large chunk of the Chinese youth has ingrained these stories of historic struggle and success, and have become part of a larger propaganda cult that actually helps the state inflict undue authority in the name of nationalism.

Influencing the Masses Today: Role of the Press and the Pop-Culture

The Jinping-led CCP often leaves no stone unturned in establishing an image for itself, one that projects the state as a protector and a benefactor. Under this umbrella, the authoritarian state has thoroughly utilised policies to suppress dissent in the country and abroad, including causing of communication blackouts, infiltrating foreign media circles, banning words, letters and social media websites in the country, and cracking down on protestors and the platforms they have used for protest. When the #MeToo protest took the world under its grip, and as the internet witnessed an outpouring of shocking stories, the CCP banned the hashtag, “#MeToo”, and its Chinese counterpart, “#RiceBunny”, within the country. Almost all social media networks in the world, including the quintessential WhatsApp, Facebook and Instagram, have been hidden for the population behind CCP’s Great Firewall (which is a set of laws and policies restricting content from foreign media from entering Chinese networks), and alternative Virtual Private Networks (VPNs) such as WeChat, RenRen, Weibo, Bing, Baidu, and many more, have been provided by the state. While this has led to multiple protests by students and academics over the years, the harsh authoritarian policies of the CCP have always overpowered dissenting voices.

As research in the matter expands, a significant number of examples explaining the complexity of the propaganda emerge. There is one way in which the CCP uses nationalism today to crack down on dissent differently, as compared to the Mao era – instead of ignoring the power of international media, it infiltrates it and uses it for legitimising its authority, while also commercialising on values of free-press to ultimately use them as props for furthering chronicles of the state. In a study published by Bloomberg, it was revealed that China would be broadcasting a mimic for the show “Voice of America”, called “Voice of China”, to “voice” out its own story (essentially, engage in “media warfare”). China’s massive media expansion in the world, and the establishment of its flagship CGTN (China Global Television Network), is meant to “tell China’s story well”, as remarked by Xi Jinping. The state has also been running journalistic stories on its “peaceful rise” – the special focus of these stories is Xianjiang, the Chinese province with a prolonged history of conflict between the Han Chinese and the Uighur Muslims, highlighting that peace and unity journalism is an important part of the state’s domestic propaganda for mass support. However, the one field wherein China has failed to grow remains Popular culture.

China’s approach towards the development of an indigenous cinema, of its own songs (most of which are patriotic), and of its own social media networks, has impeded the progress of its soft-power. Even though South Korea too shared the narrative of victimisation and victory with China, its pop-culture success, especially the impact of the Korean boy band BTS in the world today, remains unparalleled to anything Chinese culture has ever created. Perhaps China’s “top-down”, “all-things-national” approach, and the state’s undue belief that it can manufacture popular culture, is to blame in this regard. Moreover, student protesters in Hong Kong today are yielding pop culture references as tools for opposition against the authoritarian regime, while keeping themselves updated in a world where Pop culture is seen as a symbol for globalisation and unity; something that transcends boundaries.

Addressing the elephant in the room is important here – the current COVID-19 pandemic, which emerged from the wet markets of Wuhan city in China, has left the world baffled, hurt and most relevantly, wary of China. By imposing National security guidelines on information about the novel Coronavirus, the Chinese state has been recklessly hiding important details about the disease, including the fact that it is transmissible, from the world. This has been done in the name of national security and privacy, and while many outside the borders of the country have been skeptic towards its misinformation campaigns, those surveyed within China have increasingly supported Xi Jinping and his response to COVID-19 within the country.

Studies have concluded that Chinese mass-nationalism is more proactively observed among the youth today, than it is in the generations before them, with the proactivity increasing with every generation. This is recuperative of the fact that the longer the state has imposed its nationalistic education policies over the population, the more pride and confidence they have felt about the CCP’s ability to lead the country. Since the current generation has been enrolled in state-backed education systems since the start, they are more likely to exhibit such pride.

On the other hand, it is this same young population that the Chinese state is facing dissent from, particularly because today, they have access to western media more than ever. When the state banned depictions of the famous Disney cartoon character Winnie the Pooh simply because the President Xi Jinping was being compared to the likes of the bear in humour, the young populace took to the internet to share memes, pictures and tattoos of Pooh, as a means to demur against the CCP. Many see the Pooh as a symbol of the distress of the Chinese youth. Similar was the rage when a propaganda film called “The Founding of an Army” was released in Chinese cinema theatres in 2017, as it made fawning attempts to gain the trust of the youth by depicting young icons as nationalist leaders, but the impact it intended to create backfired. While the young citizens immerse themselves more and more into China’s historically nationalist narrative, something which they never saw, they are hardly fooled by what they are seeing today. Sadly for us, the many tales of disagreement within China are blocked out for the outside world, and for communities within the country itself, by its repugnant cyber and national security measures.

Many argue that multi-party systems would be the way to go for China and that the disgruntled young Chinese would lead the movement for democratisation, following the lines of Hong Kong and the Tiananmen Square protests. While there is no means to gauge the potential of democracy in China, especially since the country is leading in Human Resource Development and Economic indicators under an authoritarian regime, the real liberation for China would be to unfold truths behind the state-fed, blindfolded discourses on history and politics. At the same time, an increasing focus on Soft power politics that is inclusive of young nationalism and Pop culture fervour would strengthen mass support for the CCP, especially since exposure to this popular culture is what is failing state nationalism. A China that has always depicted itself as being wary of imperialism, is itself becoming an imperialist nation, primarily through its media warfare and misinformation campaigning. Moreover, a state pursuing nationalism for legitimacy has to, in turn, feed nationalist expectations. Therefore, a massive transformation in Chinese nationalist-propagandist ideology, towards an ideology of inclusivity, transparency and freedom of expression, would go a long way.

Anushka Saxena
Author is a Foreign Policy and International Affairs enthusiast, and her areas of expertise include China studies and Maritime Geopolitics. She is working as a Researcher with the Neighbourhood Studies Centre at the Nepal Institute of International Cooperation and Engagement, and as a Research Supervisor at Alexis Group. She is a student of History at Lady Shri Ram College for Women, Delhi University.
Tags:
Beijing Communist Party Propaganda Chinese Cinema Chinese Pop China
Share:
Share this...