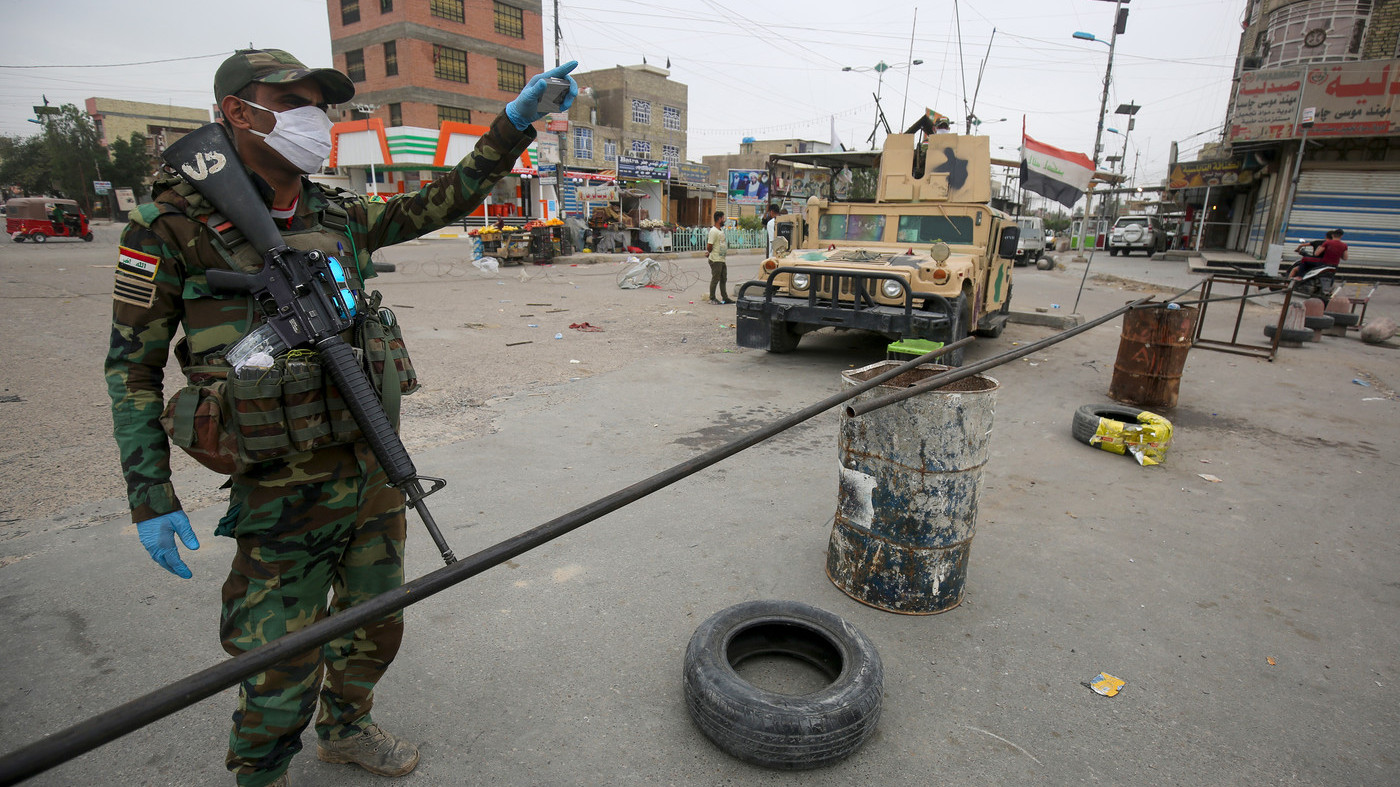 Protestors donning face masks, gloves, gas masks and mock bio-hazard suits became a common sight at many protest sites across Iraq, well into the first week of April. Restrictions on the movement of people across the globe to curb the spread of COVID-19 has not put a dampener on the anti-establishment protests in Iraq. In fact, Israel and Lebanon too saw a similar sight, with protestors donning masks, and maintaining social distance. However, protestors in Iraq’s Tahrir Square and Habboubi Square had gone a step ahead in safety measures, by regularly cleaning and disinfecting the squares.

Iraq has been in the grip of massive countrywide protests since October 2019, which became one of the biggest challenges the country has faced in the last two to three years. Citizens brought several issues plaguing the country to the fore, ranging from corruption, unemployment, failure of the government to provide basic services, and Iran’s powerful influence in Iraq. Turning into a cycle of violence, the protests saw crackdown by the security forces, killing at least 600 people and wounding more than 25,000. The protests were also momentous, as it was the first time that an Iraqi Prime Minister resigned due to popular pressure.

The protests, which were an important pro-democratic milestone in Iraq, were called off last week, due to growing concerns over the spread of COVID-19. Protestors have vowed to continue the protests once the threat of a pandemic is over. Iraq has reported 2,296 cases of COVID-19 and 97 deaths until now. Nonetheless, the protests had begun losing momentum before COVID-19 struck, due to increasing violent response by the security forces and militias, and US-Iran tensions in the wake of the assassination of Qassem Soleimani.

COVID-19 has laid bare the issues plaguing Iraq that the protestors had been trying to highlight for months, and the seriousness and urgency of their demands for reform were visible in their refusal to vacate protests sites, even after a curfew was declared in the country.

Iraq’s economy was already in trouble, and the months of protests had only led to more decline. Now, the threat of pandemic has made things worse for the country. The biggest blow to Iraq’s economy has been the falling oil prices, robbing the Iraqi government of its main source of income. Global oil prices have been severely affected by COVID-19 due to rising stockpiles, which have overwhelmed storage facilities. The blow to its main revenue source will be a major cause of trouble for the government. In addition to this, the nationwide curfew has shut down the other productive sectors of Iraq’s economy – industry, tourism, transportation, small and medium private business enterprises. The shutdown of commerce will also throw many non-government workers out of jobs, in a country that is already battling with unemployment and has a growing youth population that is in need of jobs.

Iraq’s healthcare system was faltering, even before the virus hit. According to a report, Iraq’s healthcare system lags behind the rest of the region. There is a shortage of doctors, beds, drugs and funds. Iraq’s health ministry has been massively underfunded, receiving just 2.5 percent of the state’s USD 106.5 billion budget in 2019. Much of the budget’s focus has always gone to the security forces and the oil ministry, even in times of relative peace. Hospitals in Iraq are over-crowded, with just 1.2 beds per 1,000 people. Shortages are also compounded due to archaic rules – a government rule from the 1970s prohibits doctors from purchasing equipment or medicine from the private sector. Medicines have to be taken directly from the health ministry, which often does not have an adequate quantity. The biggest crisis in the health sector is the shortage of doctors and nurses. The brutal regime under Saddam Hussein, coupled with years of war after the US invasion in 2003 drove thousands of doctors to flee the country. This has left the country without enough doctors to deal with the number of patients.

Years of war, sanctions and neglect have impaired the healthcare system’s ability to effectively deal with a health crisis like COVID-19, but its woes don’t stop here. The mishandling of the health sector by the government has left citizens with a lack of trust in the healthcare system. While the number of cases reported in Iraq are low, fears are that the full extent of infections may be much more, due to citizens’ resistance to testing. However, this resistance doesn’t only stem from mistrust in the government. There are cultural aspects to it too.

There is a stigma attached to illness and quarantine in many West Asian societies, and Iraq is no exception. Stemming from religious and cultural beliefs, this stigma runs so deep, that people avoid being tested themselves, and even prevent other family members from being tested. Some stigma emerges from the belief that the virus is God’s way of punishing them for sin, and therefore, do not want their neighbours to see that they are sick. Stigma also emerges from Islamic rituals surrounding death, where one does not want to be treated, as they want to die within the family. Adding to the fear of other customs in many Iraqi communities, if a man is quarantined, it is believed that he is now unable to protect his wife and children, or his younger siblings, and so is not fulfilling his role in the family. On the other hand, many families deny female members a coronavirus test due to the belief that if tested positive, she will be removed from the safety of her family and will possibly be sexually compromised. Such deep-rooted stigma, coupled with a lack of trust in the government and healthcare system, poses a hazardous challenge for the country. With so many people refusing to be tested, the government does not have a clear picture of the rate of infections in the country. This, in turn, impairs the government’s ability to come up with an effective response to deal with the crisis. On top of that, with people refusing to be quarantined, the risk of spread also increases.

Moreover, making an already difficult situation worse for the Iraqi government is pressure from Iran and its miltias. Iran, which was hit severely by the virus, wants to stabilise its struggling economy and is pressuring Iraq to open the border between the two countries to restart trade. Iraq closed the border five weeks ago to limit the spread of the virus and is resisting pressure from Iran. This resistance is significant when put into the larger context of the protests, which also demanded a limit to Iran’s influence in the country.

Pro-Iranian militias in Iraq are using this pandemic as an opportunity to increase their influence, especially in the wake of the withdrawal of US forces from the country. Volunteers from Kata’ib Al-Imam Ali, part of the Popular Mobilisation Forces, have been burying victims of coronavirus in the southern city of Najaf. Hoping to win hearts and influence citizens that they are a better alternative to a US-influenced government, they pose a serious challenge to the credibility of the government. With the government’s credibility already in question, their job becomes easier.

There are several issues that Iraq needs to tackle in the midst of this pandemic, the first and foremost being the election of the government. Ever since the resignation of the previous government in wake of the protests last year, three PM-designates have been appointed, but there is no government yet. The latest PM-designate Mustafa al-Kadhimi has submitted his government program to the Parliament ahead of the May 9 deadline. With the two previous PM candidates failing to garner enough support in the Parliament, one can hope that Kadhimi is able to do so, and a power vacuum at the helm of the country’s government can be filled to deal with the crisis. The current caretaker government in Iraq is operating with limited powers, and such an arrangement is not suitable to deal with a crisis like this.

For an effective response, the government needs to address the stigma associated with the illness. Culturally rooted stigma like this cannot be coerced out of citizens, the way the government has been doing, by sending armed security personnel to accompany health workers while testing. This only serves to further alienate the population, by exacerbating fear and suspicion against the government. This is, after all, a country that has seen a brutal dictatorship and years of war, and armed security personnel stands as a reminder of such harsher times. Effort needs to go into sensitising people to the disease and raising awareness to deal with the stigma, especially in more conservative and traditional societies. Only by overcoming the barrier of resistance to testing can the government truly identify the magnitude of infection spread in the country, which can go a long way in informing policy on response.

As protestors had highlighted, and the coronavirus pandemic has laid bare, the need for reform in Iraq is severe. However, it is also true, that at a delicate time of crisis like this, achieving a complete overhaul of the system, as demanded by the protestors is impossible. Completely restructuring the system needs a more stable environment and is impractical to expect at this point. The new government would then need to focus on gradual reforms within existing systems while maintaining enough stability to deal with this crisis.