South Korean Elections During The Time of a Pandemic 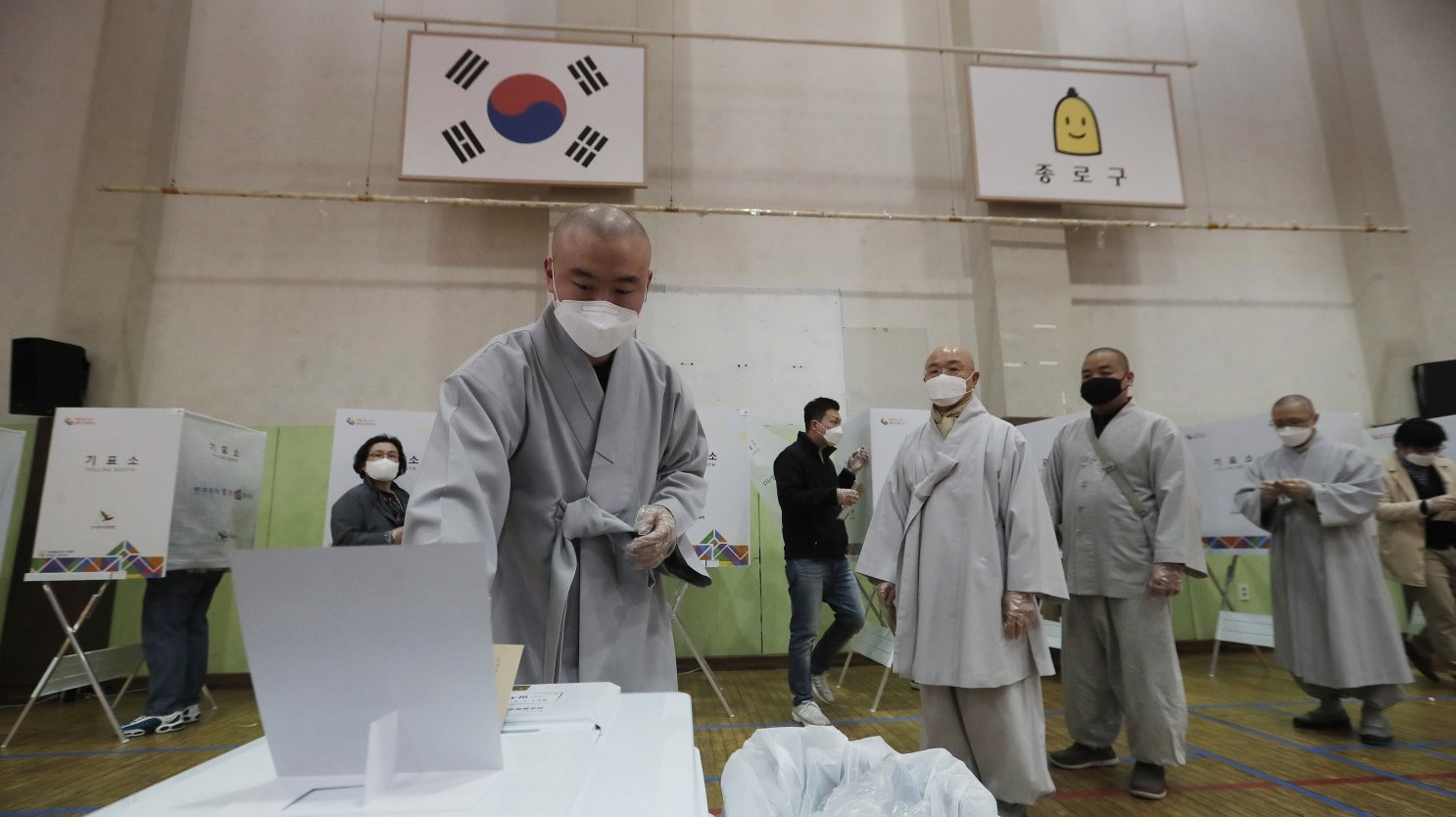 The Republic of Korea (ROK), or South Korea, went to the polls during an especially difficult time for the world — the COVID-19 pandemic, that has resulted in over 200,000 deaths so far. The country was one of the first to be affected by the Coronavirus, having reported its first case on 20 January 2020 — a Chinese national from the Wuhan province, where the virus is known to have originated, late last year.

The election of a new leader to head the presidential constitutional Republic into the third decade of the twenty-first century witnessed a record turnout, in spite of most countries of the world having implemented nationwide lockdowns to curb the spread of the Coronavirus.  President Moon Jae-in of the Democratic Party of Korea (DPK) triumphed at the polls, claiming 60 percent of the vote, following through from the win in 2017 when over 40 percent of the vote was won.

The DPK is a moderate, centrist, and liberal association, and was formerly the New Politics Alliance for Democracy (NPAD). The Party is a strong proponent of Korean unification (which Jae-in claims to achieve by 2045), denuclearization of the Korean Peninsula, and the alliance with the United States of America.

Conduct of Elections: An Analysis

The elections were conducted with all mandatory measures implemented countrywide such as rapid testing (the ROK has drawn global acclaim for this measure — an area in which several countries have been found lacking) and contact tracing to curb the spread of the novel Coronavirus.

Candidates utilised the digital medium to its best extent, with extensive campaigning having been undertaken through the means of video, and preventive measures having been adopted during public speeches.

The South Korean people turned out in large numbers to vote in the national elections, and adhered to the stringent policies being pursued by the Republic in the wake of the COVID19 pandemic. They were equipped with face masks and surgical gloves, while sanitizers were placed in areas where votes were to be cast.  Temperature measurements of voters were taken, and social distancing measures were adopted during the casting of the ballot.

Strict rules were abided by through the voting phase, with guidelines mentioning timings for voting (6 AM to 6 PM) as well as a timely return from polling booths (by 7 PM) and a closure of all booths by 8 PM. Victims of the Coronavirus were also allowed to cast their votes, while there were no reports of the virus having spread as a result of any lapses in preventive measures during voting.

Voters aged 18, who have been allowed to vote following a lowering of the voting age in December of last year, accounted for over 1 percent of the ROK’s participant electorate. The reform in voting age added 548,000 people to the number of eligible voters in a country with a relatively high median age of just over 40 years. South Korea also implemented early voting mechanisms to enable the casting of a vote well before the official date of 15th April.

Voting, however, wasn’t as comprehensive as could have been. Overseas voting was disallowed in 55 countries with the South Korean Embassy in New Delhi and its Consulates in Mumbai and Chennai some of the outposts that didn’t witness South Korean nationals based in India casting their votes.

Elections during Pandemics: Some Perspectives

The elections held in South Korea during the pandemic are worth commendation. Several countries cancelled elections upon the spread of the novel Coronavirus, with public gatherings of large numbers of people having been one of the peculiar vulnerabilities during a pandemic that has seen over 3 million registered cases. In the United Kingdom, local elections were postponed to mid-2021. It is being reported that presidential elections in the United States (scheduled for later in the year) might also be postponed.

The conduct of elections during pandemics is not a new phenomenon. The United States – presently, one of the countries in the world worst affected by the COVID-19 with over 1 million cases and 60,000 deaths at the time of writing of this piece — organised mid-term elections during the deadly Spanish flu of 1918 that had resulted in thousands of American deaths.

To conduct elections during natural disasters and terror attacks, ‘election emergency’ stipulations should be implemented beforehand, as per Michael T. Morley of the Florida State University.  As a consequence of raging pandemics such as the 2009 H1N1 influenza or the novel Coronavirus, ‘election emergency’ measures can regard global epidemics as serious and severe disruptors of normal life, and devise stipulations to integrate with those prescribed for natural disasters or acts of terror.

South Korea is also not alone in having proceeded with the conduct of national elections, in these troublesome times. Postponed elections in Guinea were held well into the dark days of the pandemic, while Poland will be utilising the medium of its postal service for the conduct of presidential elections scheduled for the 10th of May.

Iran, a country laid bare by the COVID-19 pandemic, organised presidential elections in late February – a month by which the country had already amassed several Coronavirus cases.

Conclusion: A Nation Primed for Strength in Leadership

Several democracies the world over have displayed a steadfast commitment to upholding the principles of universal suffrage through history, and have constantly made efforts to stand tall against the forces of evil who are constantly thinning the fabric of representative governance.

President Moon Jae-in’s forward-looking DPK will continue to govern a nation focussed on modernising its armed forces with rejuvenated defense reform plans and budgets, and one that is constantly striving towards a peaceful East Asia. The pandemic, too, has left South Korea undeterred on the road to 2045 as the betterment of relations with North Korea remains high on the national agenda as does the rise of China and the threats posed by the Dragon in the East and South China Seas.

The country’s show of unity can serve as an inspiration to a world left ravaged by a pandemic, that according to many experts, is likely to resurface in the near future and cannot be eradicated in its entirety. With the country having reported low deaths and infections in the past few days, the Republic of Korea and its re-elected and revitalised leadership are surely primed for prosperity.

Disclaimer: The writer is a Research Associate at the National Maritime Foundation in New Delhi, India, and researches on maritime issues pertaining to Japan, the Republic of Korea (ROK), and the Association of Southeast Asian Nations (ASEAN). The views reflected in the article are the opinions of the author in a personal capacity and do not reflect the views of his employers.

Jay Maniyar
The author is a Research Associate at the National Maritime Foundation in New Delhi, India. The views expressed above are in a personal capacity, and do not reflect the views of his employers. He can be reached via email at jaymaniyar@gmail.com, and can be contacted on the professional networking platform, LinkedIn.
Tags:
South Korea Novel Coronavirus Epidemic Elections History leadership CoronaVirus pandemic COVID-19 Republic of Korea
Share:
Share this...