The Scope for INSTC in the Evolving India-Baltic Relations 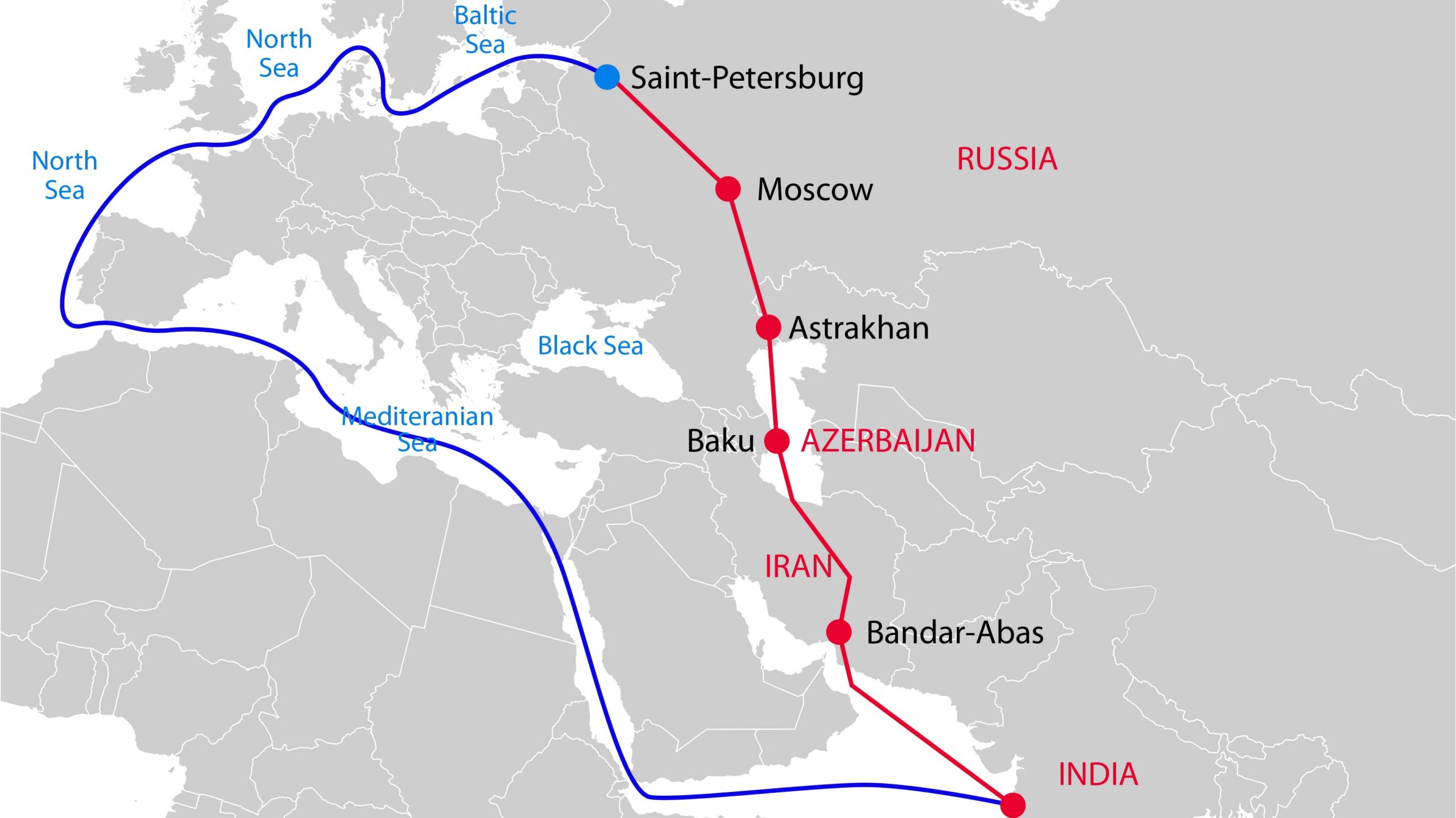 The International North-South Transport Corridor (INSTC) is a renewed, modern version of an ancient mode of transportation that extends from Russia, connecting Central and West Asia, straight down to India and other parts of South Asia. Ratified by Russia, India and Iran in the September of 2002, the INSTC treaty aims to build a mode of transportation that broadens contours of economic cooperation for all the nations that fall on the way, and to kick start multilateral cooperation in the region, as is being promoted by India’s 2012 ‘Central Asia Policy’ and ‘Eurasia Policy’. The INSTC facilitates a 7,200 Kilometre long trade network stretching from the Indian Ocean to the Persian Gulf via Bandar Abbas port in Iran, and onward to the Caspian Sea via Astrakhan port in Russia, from where it goes on to Europe via St. Petersburg in Russia and the Baltic Sea. It is a versatile network plan involving India, Iran, Russia, Azerbaijan, Kazakhstan, Armenia, Belarus, Tajikistan, Kyrgyzstan, Oman, Syria, Turkey, Ukraine, and Bulgaria (in an observer’s capacity). However, the three Baltic nations of Lithuania, Estonia and Latvia are yet to be integrated into the grand project.

It is safe to say that India-Baltic Relations are an undermined subject of discussion in the Indian Foreign Policy Narrative. Much before India’s independence, Jawaharlal Nehru noticed the potential for India-Baltic relations and pointed out that both regions are “geographically distant but culturally close”. Vice President Venkaiah Naidu’s state visit to the Baltic countries in August 2019, in this light, points to India’s revived outlook for India-Baltic relations. Similarly, with the dilemma about the future of the European Union overshadowing Europe’s foreign policy debates, the Baltic states are looking at India as a fresh market to seek economic aid and investments from. The investment aspect would prove to be thoroughly lucrative for India, since the Baltic countries are strategically located between Europe and Russia and near the Baltic sea, and have immense potential to play a central role in global transportation networks. While Asian investments, on the whole, have been on a rise in the Baltic, there is still scope for India to divert trade attention to the region. Moreover, both India and the Baltic share the Maritime value of preserving their own sovereignty and economic interests in the strategic waterbodies named after the regions themselves – the Indo-pacific (Specifically, the Indian Ocean Region), and the Baltic Seas, respectively.

The Baltic States have been an important part of the ancient Silk Route and Amber Road, both of which were vital trade networks – while the former served as a link between the new and the old world, the latter connected Europe and Russia intricately. They are part of a complex rail-road-maritime network, which places Latvia at the centre of connectivity among Europe, Central Asia and Russia. Moreover, the Baltic States are a significant part of NATO, the European Union, and the Council of the Baltic Sea States. They argue constantly for reforms in the United Nations and for better representation in the UN Security Council, in which India is attempting to gain a permanent seat (Sharanya Rajiv, 2018). Estonia and Lithuania are hubs for cybersecurity and technology (the NATO cooperative Cyber Defence Centre of Excellence and the Vilnius Blockchain Centre are located here), which is a great opportunity for India, especially considering the growing need of development within its Cybersecurity and Telecom Sectors. The India-Baltic partnership has much to offer, but the contribution from both sides is still negligible.

INSTC: A Tool for Togetherness

In this light, a common “fear” or apprehension toward the elephant in the room, China, can also be observed. Most of the trade routes connecting India to Russia pass inland through China, making the affair tedious and unreliable. At the same time, the Baltic states, owing to China’s aggressive policies in Europe, Russia and the South-China Sea, are averted to facing a similar economic and political leverage at the hands of China in the Baltic Sea, or in their own small nations.

India readily sees the INSTC as a response to China’s ambitious Belt and Road Initiative. In this light, gaining the support of the Baltic states in the INSTC can prove to be extremely fruitful, not only to India and the Baltic but also to Russia. The Baltic countries provide a strategically paramount location for placement of INSTC transportation hubs and logistic ports, and at the same time, the Klaipėda, Riga and Tallin ports are ice-free ports that would permit movement of freight throughout the year. Russia is heavily dependant on these ports for its land and sea transports, and hopefully, the integration of the Baltic in the INSTC project can further the agenda of both India and Russia by creating a faster and cheaper transport network with the Baltic port and Chahabar/ Bander Abbas (Iranian port) facilities located at two focal centres.

The world awaits complete operationalization of the INSTC, without which, neither can the project counter-balance China’s increasing geopolitical influence nor can it emerge as the faster and cheaper route of transportation that it has been made out to be in papers and discussions. In January of 2018, the first consignment of goods was sent from Mumbai to St. Petersburg via the INSTC, after 18 long years of the commencement of the project. The INSTC, unlike other international projects, is yet to address its shortcomings, issues being faced on the ground, and geopolitical contentions being faced by partner countries (such as the destabilisation of the European Union, the tensions in Iran following economic sanction from the United States, China’s hegemony in the region), and of course, the disruptions caused by the COVID-19 Pandemic. As iterated before, the Baltic States could be approached to act as partners in the project, and the scope of the Corridor could also be extended to the South Asian States to enable a 40 percent faster and 30 percent cheaper trade connectivity between South Asia and Europe (Meena Roy Singh, 2015), without interference from China and Pakistan. The INSTC is also India’s answer for avoiding interference from Pakistan with respect to connectivity with Central Asia, as it helps India connect with Central Asia through the Chahabar port in Iran.

India’s Diplomatic approach to the Baltic deserves special attention. Following its Cold War schematic of engaging with the World, the External Affairs Ministry of India has placed the Baltic Nations in its Central Europe Division. However, owing to the potential of India-Baltic Partnership in a large number of fields such as Cybersecurity, Digital Technologies, Climate Change, Counterterrorism, Trade and transport, Maritime Cooperation, and the INSTC, the Baltic Region should be a separate division within the MEA. Sadly, India’s diplomatic mission in Stockholm is accredited to Latvia, and the mission in Helsinki (Finland) is accredited to Estonia (MEA, India). Apart from that, only one honorary Indian consulate exists in Estonia. An expansion in the India-Baltic trade network through the INSTC would perhaps require for India to also expand its diplomatic presence in the Baltic states, and initiate a dialogue-based mechanism for partnership.

During an interview in June 2016, PM Modi remarked, “The Small States are as important as Larger Ones,” and he asserted that he had made changes to India’s former approach of assuming that relations with smaller nations would only develop under the shadow of the bigger nations. Hence, India’s relationship with the Baltic small states fits well within the Modi purview of a complexly interconnected world. Despite its setbacks, the INSTC as a large multilateral initiative would require a few more years to become fully functional. In this regard, India’s dedicated efforts in bringing together an INSTC that is capable of addressing its issues and is successful in leveraging the potential of the Baltic, can go a long way.

Anushka Saxena
Author is a Foreign Policy and International Affairs enthusiast, and her areas of expertise include China studies and Maritime Geopolitics. She is working as a Researcher with the Neighbourhood Studies Centre at the Nepal Institute of International Cooperation and Engagement, and as a Research Supervisor at Alexis Group. She is a student of History at Lady Shri Ram College for Women, Delhi University.
Tags:
INSTC Diplomacy Baltic Foreign Policy International North-South Transport Corridor Corridor trade India
Share:
Share this...