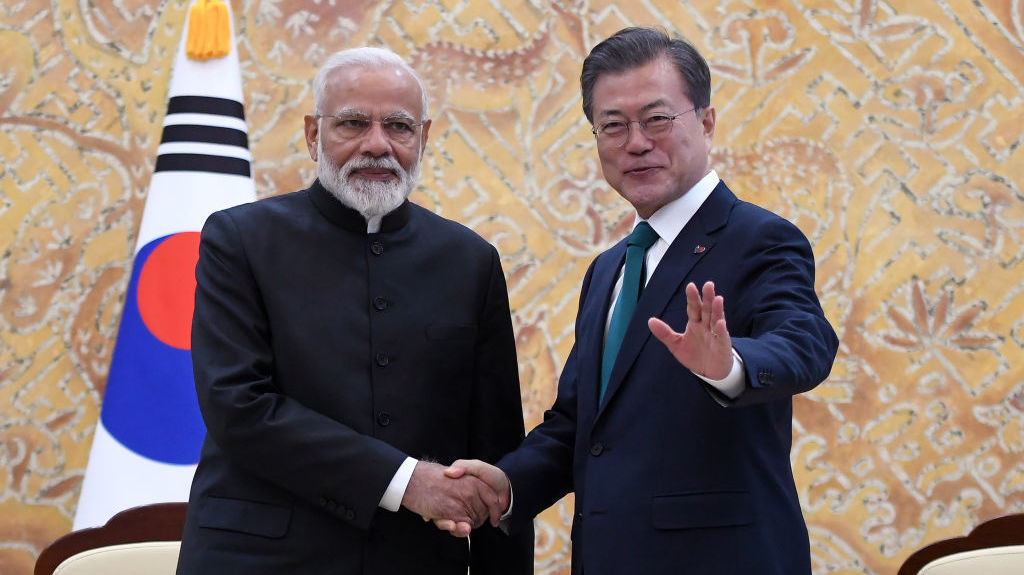 The two countries of India and the Republic of Korea (ROK) share deep historical, social, and cultural bonds. The Buddhist monk from then-Korea, Hyecho, visited India during his voyages and pilgrimages in the year 723 AD, reaching the country in 724.  He stayed for a few years before proceeding to China in 729.

Civilisational linkages date back to the ancient times, while India and South Korea officially established bilateral relations in 1962.  In the following decade, Ambassador-level relations were furthered. During the 1950-53 Korean War, India provided a field ambulance and also sponsored the Resolution that brought about the end of the War.

Geographically, the two countries lie a fair distance apart. However, this has not played any significant role in an ever-deepening friendship and camaraderie.  Successive South Korean and Indian governments have pledged and implemented a series of partnerships and agreements to ensure that India-ROK relations remain on a sound footing.  The end result has been a prosperous and blossoming relationship.

THE PRESENT-DAY INDIA-SOUTH KOREA PARTNERSHIP: A STEP UP FROM THE 1990s

South Korea is an important country as far as India’s Act East Policy is concerned, and was critical to the first phase (1991-2003) of the Look East Policy, during which India reached out to East and Southeast Asian countries to boost economic cooperation.  South Korea’s New Southern Policy highlights India’s increasing importance in the ROK’s global dealings.

In 2018, the President of the Republic, Moon Jae-in, vowed to almost triple trade ($21.5 billion, as of 2017-18) between the two countries by the year 2030. A Comprehensive Economic Partnership Agreement (CEPA) – a landmark agreement signed by India with an exclusive group of partner countries to ease trade norms – was signed between India and South Korea in 2009.

Presently, the Republic of Korea and India enjoy largely amicable and prosperous relations. The leaders of the two prominent powers, President Moon Jae-in and Prime Minister Narendra Modi have developed a deep and strong personal bond, while visits and meetings have been remarkably frequent.

ENVISAGING COOPERATION BETWEEN INDIA AND THE ROK: KEY AND PROMISING AREAS

As regards the maritime domain, the two countries can broaden the scope of the 2019 Indo-Pacific Focussed Logistics Exchange and Memorandum Agreement (LEMOA), which facilitates the sharing of sensitive military information to factor the rise of China. The LEMOA can have stipulations to specifically focus on the Indian Ocean, and address concerns regarding the presence of Chinese submarines engaged in surveillance activities in the Ocean.

The Republic of Korea was the only partner country to feature at the 2016 Maritime India Summit and was offered a chance to showcase its maritime prowess in several domains such as shipbuilding, maritime technology, and maritime financing. The ROK must be encouraged to feature in Track-1 maritime summits on a regular basis.

In the year 2017, three Republic of Korea Navy (ROKN) ships visited Indian ports. In the following year, a Korean vessel took part in the SAREX18 – an exercise focused on Search And Rescue (SAR). The Indian Coast Guard vessel, the INS Shaurya, undertook a visit to the ROK in April 2018, to participate in a joint exercise with the Korean Coast Guard. Ensuring preparedness and upkeep in domains such as Humanitarian Assistance and Disaster Relief (HADR), facilitating knowledge exchange through mutual visits of naval officers to maritime and defense institutes through scaled-up Memoranda of Understanding (MoUs) that reflect the security realities of 2020, joint maritime patrols to complement the Sahyog-Hyeoblyeog exercises, and joint development of military technologies through collaboration between India’s Defence Research and Development Organisation (DRDO) and the Agency for Defense Development of the ROK are areas that necessitate attention from both parties.  Joint anti-piracy patrols and missions in the South China Sea, in aid of grief-stricken Southeast Asian countries, would also go a long way in cementing traditional goodwill espoused by both countries in the ‘world’s most dangerous region’ as far as maritime piracy is concerned.

Complementing the MoU signed by India and the International Seabed Authority for exploration of the Central and Southwest Indian Ridges for polymetallic sulphides, India and the ROK should consider the possibility for joint exploration and deep-sea mining in the Indian Ocean.  Cooperation on similar lines can be extended by the two nations to the mineral-rich East Asian region.

The ongoing COVID-19 (Coronavirus) outbreak further cemented ties between the two countries, with India having purchased testing kits for the coronavirus from one of the first few countries to have been affected by it. The world was largely in praise of the Korean response to the outbreak, with quick and efficient measures to curtail the spread of the virus.

South Korean companies also indicated a desire to switch manufacturing of goods such as automobiles to India, from China, in the wake of the outbreak of a pandemic that has resulted in the loss of 165,000 lives. India’s business-friendly government can offer Korean firms a host of incentives and a conducive business environment in which to set up and operate. Subsequently, India can offer its vast and lucrative open markets for South Korean goods manufactured in India.

AREAS OF CONCERN THAT NECESSITATE ATTENTION

The major regional powers such as Australia, the United States, France, Japan, and India having unequivocally professed strategies for the Indo-Pacific Region or, in the latter’s case, committed themselves to regional security groupings such as the rejuvenated Quadrilateral Security Dialogue (QUAD).

The two countries, once on an equal footing, unfortunately, diverged over their development paradigms. The ROK experienced an industrial boom and modernized rapidly in the 1960s during the sixteen-year long presidential reign of a former military officer, Park Chung-hee, while India, as on date, is still inarguably a ‘rising’ power and one that is yet to unshackle itself from the innumerable ills faced by its masses.

Post-independence, India remained impervious to most regional and global powers of strategic influence and maintained a policy of non-alignment during the Cold War.

A continuously evolving India-South Korea partnership should be based on robust ideals and designed to build upon each other’s strengths while maximizing cooperation in areas where the two countries can help each other in the short and long terms.  South Korea lacks the global weight of Japan, the bestowed charms of China, the maverick unpredictability of North Korea, and the historical influence of Russia in the highly volatile region of East Asia.

However, that is no reason for India to hold itself back when it comes to security, economic, diplomatic, and cultural overtures to the East Asian country.  Bilateral trade (such as India’s export of petroleum products to the South Koreans which account for a large chunk of exports), multi-faceted cooperation, broad-based diplomacy, joint endeavours in the domains of military (land, sea, air, and unconventional domains such as space and cyberspace) security, and social and cultural ties that bind the countries together should always be encouraged.

Cooperation is hinged on converging interests and should address the many common challenges such as military assistance, HADR, financial aid disbursed through carefully-crafted programs to help alleviate critical problems that merit urgent attention such as India’s creaking infrastructure and pervasive poverty, and the trade of emergency equipment during times of crises as witnessed during the ongoing COVID-19 pandemic (India imported rapid testing kits from South Korea in large numbers).

These are just a few areas where the two countries can assume the critical roles of becoming support-systems to each other in times of pressing need.

Jay Maniyar
The author is a Research Associate at the National Maritime Foundation in New Delhi, India. The views expressed above are in a personal capacity, and do not reflect the views of his employers. He can be reached via email at jaymaniyar@gmail.com, and can be contacted on the professional networking platform, LinkedIn.
Tags:
partnership COVID-19 Maritime Republic of Korea Maritime Security India
Share:
Share this...