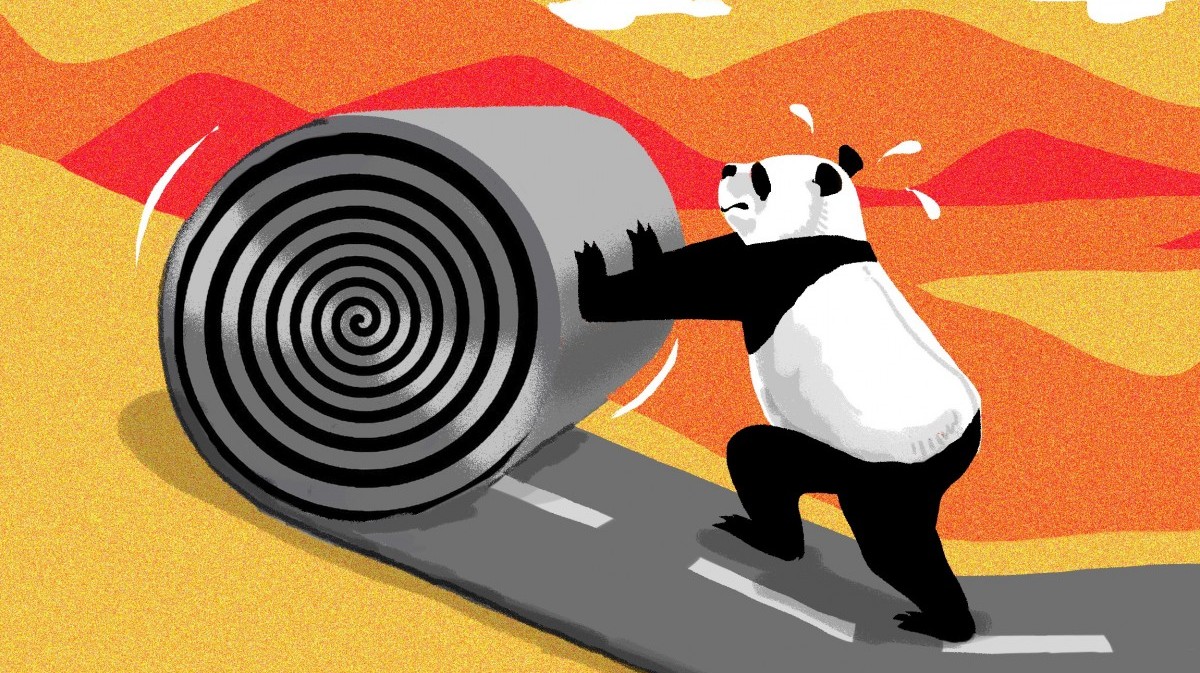 Ab initio of the post-Cold War era, there is unchallenged ascendency of the United States at the throne of the International World Order. The erstwhile Soviet Union, the only antagonistic force, succumbed to the enlarge America’s containment Policy at the pivotal of Cold War episode. The suit was followed by other regional powers as well. All nations started either establishing new multi-faceted relationships or ensuing the bandwagon to the US. However, over a period of time, there was an eruption of dissent amongst the international community, and the major protagonist countries were primarily Russia and China. As far as former is concerned, dissent could be justified on grounds of asymmetric implementation of liberalization process under the garb of ‘Shock Therapy’ which resulted in an unaccounted decline in the Russian economy and detrimental effect on the lives of inhabitants. However, in contrast, China since the advent of Mao Zedong’s government, it has progressed so far with undeniably the revisionist posture. Ideologically, Mao had inspired from Marx and Angel’s ideas, but rather in its pursuit to establish communist society per se, he along with his fellow comrades deviated by deliberately adopting fundamental principles of Capitalism, at the pretext of communism. Some scholars nowadays calling it ‘Market Socialism’. The reformative process has been done under the leadership of Den Xiaoping. At the same time, the Cold war was undergoing and China has started to advance itself at the helm of alleged communist leadership in the world. Internally, China has enormously built up and made its society stronger enough to face off any challenge coming from inward or outward. It has attempted various events to challenge the US leadership and make a paradigm shift in the international order.

With the emergence of BRICS, initially an economic multilateral organization, China has asserted its dominating position and affirmed it as the counterweight to IMF as it was perceived as a tool of US dominance. Moreover, in 2001, China came up with the idea of establishing a security and political alliance in the form of the Shanghai Cooperation Organization (SCO). The sole idea of its creation is advancing multi-polar world order where SCO has immense potential to challenge the unipolarity hitherto and reducing the US influence in the region. The member states are regularly holding the military exercises, cooperating in tackling terrorism and external threats and strengthening the cultural ties. At the outset of multilateral junctures, China is quietly forging ahead with the perceived threat amongst the member states to catch the sight of US presence in the region as a threat to their national interests and security. The outcome of this buildout will pave the way for its uncontested dominance which would then have actually serious repercussions to member states’ national interests in particular and regional peace and development in general. The prominent quintessential is Chinese debt-trap diplomacy where two member states of SCO: Kazakhstan and Tajikistan, have a disadvantageously high-stakes debt to China. Earlier, the International community has already witnessed Sri Lanka yielding up its strategically significant Hambantota Port (Singh, 2018).

With coming up at the cathedra of Beijing, Chinese president Xi Jinping envisioned to reinvigorate the tradition ‘Silk Road’. The rejuvenated form has taken shape in the form of the ‘Belt and Road Initiative’. However, the corona outbreak has forced it to retreat from its ambitious project and made it necessitate to internally stabilize the country from the after-effects of COVID 19. As far as South Asia is concerned, Pakistan, which was overwhelming excited to get the funds from China for its regional development in the China-Pakistan Economic Corridor Project, which is one of the facets of BRI, has been facing the backlash from within to control the upsurge of the virus, amidst its inefficient medical infrastructure. Another neighbour to it, Iran, which has been a very vocal supporter and advocate of BRI, has been under the sway of the Corona’s catastrophe. Around four thousand deaths have been reported and sixty-four thousand five hundred new cases have been accounted till 8th April  2020 (Education, 2020). In the initial outbreak, Health Minister Saeed Namaki propounded that amongst the positive cases, one of them had the indirect travel history from China and he had brought the virus in Iran (NEWS, 2020). The New Delhi based Think Tank, Observer Research Foundation has come up with a comparative analysis of the reported cases in BRI and Non-BRI countries (Figure 1). There is a massive upsurge of positive cases in the former, and the latter has been experiencing the presence of positive cases only due to its travel history to BRI countries. The outbreak was initiated first in the Hubei province of China and subsequently spread more or less to almost all major countries—especially those with which China has the most contact.

China was expeditiously working to integrate the whole world through the BRI wherein many countries, indeed, supported and joined China in its realization. However, now those countries are facing the consequences of their decisions. Undoubtedly, they can’t afford to further see the escalation of Corona in their regions because the examples of Iran, Italy and South Korea which are severely impacted by it, is before everyone. The culmination of these developments may be that the ambitious Chinese project of BRI is going to be hampered and concurrently associated with the corona led xenophobia. The pessimistic image of coronavirus will be associated with Chinese and their products for some time to come. The Chinese leadership is seeing the flip side of its successful public diplomacy and soft power, accentuated by schadenfreude. This outbreak has diluted its position in the international community and it is going to take a long period of time to wither away the prevailing xenophobia against them. This outbreak has led to once again to the world introspecting on the cost & benefit analysis of the Belt and Road Initiative.

When the world is uniting in the fight against the outbreak, China is advancing its warmongering measures in Indo Pacific Region and the South China Sea in particular and receiving worldwide condemnation. With reference to the South China Sea, it is considered both conflictual issue and the bone of contention in Sino-Vietnamese Relations and Sino-US relationship respectively. A few days back, a Chinese surveillance vessel has reportedly sunk a Vietnamese fishing boat on the false allegation of entering into its territorial area (Parameswaran, 2020). Remarkably, this is not the first of its kind incident but the regular confrontation from the Chinese side.

Since 2013, China has been assertively establishing military and artificial bases in the South China Sea. The only intention of this development is to burgeon its region power and hegemony over others (Initiative, 2019). In fact, China has moved ahead with the establishment of two new districts in Paracel and Spratly Islands by putting the Chinese name: Xisha and Nansha (Lo, 2020). It was evident that the site is in dispute with Vietnam and is the clear violation of the China-Vietnam Agreement on the Basic Principles Guiding the Resolution of Maritime Issues in October 2011 (Michael Martina, 2017). The waterway used by Vietnamese boats has been claimed by China along the ‘Nine-dash line’ which overlaps exclusive economic zone of Vietnam, Brunei, Indonesia, Taiwan, Malaysia and the Philippines. Most of them are the Association South East Asian Nations (ASEAN) countries which China tries to project itself as a major partner to ASEAN and tries to absorb them into the Asia Pacific grouping. However, this posture gives two-fold learning to ASEAN and other major powers. First, China’s regular infringement with the sovereignty of neighbouring countries’ and bullying behaviour in the region will give rise to the apprehension for ASEAN countries and simultaneously, it provides the room to manoeuvre for them to give a thought for Indo Pacific alliance which believes in free navigation for all, adherence to international law and belief in the pursuit of Dialogue for resolving regional differences and conflict. Secondly, Indo-Pacific countries need to burgeon its efforts in maintaining regional peace and stability and at the same time, balance Chinese aggression by putting pressure through collaborative efforts. However, the recent Chinese misadventure will definitely apprehend the ASEAN countries in further supporting BRI in the same way when the former PM of Malaysia, Mahathir Mohamad, pull out itself from two investment projects under BRI. (Erickson, 2018)  By keeping in mind, the long history of Chinese authoritarianism both internally and externally practised, its dream project, Belt and Road Initiative is the ‘castle in the air’.

By and large, BRI was considered the most pivotal project and the tool of its hegemonic manifestation to topple the US leadership. However, the aftermath of the Corona outbreak has severely damaged China internally which would take a lot more time to come to the normal state of affairs. In the post COVID era, China could have taken leverage by demonstrating global leadership in assisting other affected countries with providing ‘essential medical equipment, financial aid, sending Chinese doctors and manpower resources. Moreover, as far as its own region is concerned, Vietnamese boat misadventure has propounded the message to its neighbouring countries to either toe its line or face consequences. China’s sabre-rattling and war-mongering attitude reflect opinionated, myopic and inward-looking conduct, unlike a true global leader per se. The culmination of China’s conflicting posture vis-à-vis the South China Sea, unending internal hostility from Tibet, Taiwan and Hong Kong, and the recent COVID effect on BRI is the arrival of descending China’s revisionist World Order. At the same time, with the end of the Corona episode, all major powers need to put more efforts in changing the trajectory from unipolar world order to more participatory, rule-based, multi-polar world order and that should be in accordance with International law and consensus of all.