Chinese Interests in Afghanistan: From Indifference to Strategic Involvement 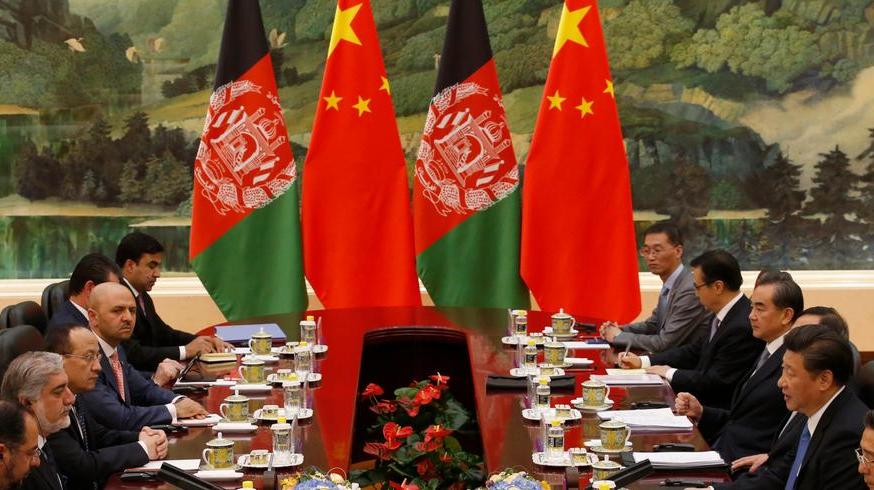 The reduction of U.S. troops from Afghanistan has given birth to a new quest for a political settlement after 41 years of war. In the last few years, China is stretching its diplomatic and economic ties with Afghanistan, with its policies shifting from ‘calculated indifference’ to strategic engagement. Chinese interests in Afghanistan are largely associated with economic interests as it hopes to integrate Afghanistan into Belt and Road Initiative (BRI). It can be said that Afghanistan could forge a symbiotic engagement especially in the context of China’s transcontinental connectivity ventures. Additionally, China’s other considerations like intervening in domestic affairs of the Afghans, and distinct strategic leverage over Pakistan, could help Afghanistan break out of the long-standing security morass.

Historically, China has regarded Afghanistan as a neighbour wielding little strategic significance. The inception of the provisional government led by President Hamid Karzai in 2001, developed bilateral ties between the two countries. Ever since China began to explore commercial opportunities in resource-rich Afghanistan, it refrained from getting involved in the politics or the brewing security situation in the country.

China provided covert assistance to the United States, Pakistan, and Saudi Arabia in the 1980s in arming the Afghan Mujahideen to wage jihad against the Soviets. However, China has hardly shown interest in joining the post-2001, US-led war effort in Afghanistan. Beijing wanted to remain disentangled in political reconciliation and economic reconstruction to avoid being labelled as the “subordinate partner” of the western coalition. After the reduction in the number of US troops in the region, the strategic community has been widely anticipating who would fill the security void. China is often seen as a credible partner owing to its economic dividends and transnational connectivity ventures. China also possesses distinct strategic leverage over Pakistan and could use it to establish stability in Afghanistan.

Since its establishment in 2014, the National Unity Government (NUG) in Afghanistan, led by President Ashraf Ghani, has been advocating for greater Chinese involvement in the country to drive peace negotiations and promote regional connectivity and economic growth. Ghani accorded much importance to China and placed it in the first circle of engagement. Afghanistan intends to use the “Chinese Card” against its hostile neighbour Pakistan which has increasingly strengthened the ideological foundations in the Taliban.

Chinese foreign policy is often perceived as “unpredictable” depending on the premise of “diversionary aggression”- that it instigates international conflicts to sustain the domestic public appeal of the ruling party. In Afghanistan however, China is expanding its diplomatic and economic ties, with its policy visibly shifting from calculated indifference to increasing engagement.

The detrimental security situation in Afghanistan and the risks that it could pose to China’s long term economic endeavours is an unsettling prospect for China. However, its willingness to involve in Afghanistan is driven by the unease regarding the geographical proximity between Afghanistan and its own Uighur Muslim-dominated Xinjiang Province. Terrorists often use Afghanistan as a launching pad making it a home to the Taliban and several other transnational terrorist groups. Moreover, China claims the Xinjiang region to be the breeding ground for the three evils- terrorism, separatism, and religious extremism. Afghanistan also poses a risk of being a launch pad to establish links with already vulnerable Uighur- inhabited areas of China.

China also fears that the ideological influence of pan-Islamic groups functioning in the tribal areas of Pakistan and Afghanistan can exacerbate separatism in Xinjiang. Many exiled Uighur fighters have found sanctuary in Pakistan’s Federally Administered Tribal Areas (FATA), and the southern and eastern provinces of Afghanistan. It is widely believed that the fighters are affiliated with other transnational outfits, such as the Islamic Movement of Uzbekistan (IMU), which itself factionalized into the Taliban and Al-Qaeda. Additionally, many Uighur fighters remain focused on devising attacks on China. Eventually, the first and foremost reason for China to step up activity in and around Afghanistan is its domestic security concerns related to Xinjiang Province. There has also been the proliferation of the Islamic State in Afghanistan which is again seen as a source of insecurity.

In September 2018, the Afghan Ambassador to Beijing said in an interview with Reuters, that China is willing to train Afghan soldiers on China, in an effort to counter Islamic State (ISIS) and Al- Qaeda militants attempting to infiltrate Xinjiang through the northeastern border of Afghanistan, the mountainous Wakhan Corridor. Additionally, the media houses and intelligence organizations from across the world are circulating reports about the construction of the Chinese military base in the Wakhan Corridor of the Badakhshan Province of Afghanistan. Though China has repeatedly denied the claims, there is evidence that suggests the presence of Chinese military vehicles in the area. China has been believed to facilitate the construction of the training camps, with the motive of stationing at least one battalion of troops at the base, in conjunction with requisite weaponry and military equipment.

China’s increased involvement in Afghanistan can also be attributed to the country’s economic ambition. Owing to the geographically strategic location of Afghanistan, the country has immense potential to link the markets of South Asia, Central Asia, West Asia, and China. Afghanistan is also home to a huge resource repository, ranging from rare earth elements to copper deposits, gold, iron ore, lithium and more. The rich mineral resource base of Afghanistan, if managed efficiently, has the potential to be a substitute for foreign aid, which will reduce its dependence on international donors, a contingent on security to begin with.

As the US troops have reduced in Afghanistan, China is increasingly preparing for the uncertainty that may prevail as a consequence. This may jeopardize the development cooperation between the two countries, sabotaging China’s interest in the region. China has realized that for the war-ravaged Afghanistan to develop stability and maintaining security, economic infrastructural robustness is a prerequisite.

The BRI often referred to as the New Silk Road, initially seemed to bypass Afghanistan. In 2016, China and Afghanistan signed a memorandum of understanding (MoU) which served as a commitment to jointly promote cooperation under the BRI and marked the beginning of Afghanistan’s integration in the transcontinental infrastructural development. China and Afghanistan are connected in northern  Afghanistan via Sino–Afghanistan Special Railway Transportation Project and the Five Nations Railway Project, and projects to connect with Southern Afghanistan via the China Pakistan Economic Corridor (CPEC), in a mutually beneficial accord. The two countries have also initiated a fibre optic link via the Wakhan Corridor in the Badakhshan Province of Afghanistan. According to the Ministry of Public Works and AFRA, Afghanistan Rail Network will be beneficial in the transportation and industrial construction of goods and commodities. It will also resolve the problem of transporting Afghanistan’s mineral products to regional ports. Experts say that the network will facilitate the transportation of agricultural products and connect the provinces and economic centres of the country.

China has proved to be one of the most significant trading partners for Afghanistan; thus both sides continuing to show a tendency towards more commercial exchanges. The trade volume between both countries has increased significantly as China has realized how significant is the relations with Afghanistan seeking the strategic geographical presence of the nation-states in the region. According to the Chinese Ministry of Foreign Affairs, the bilateral trade volume between the two countries reached US $544 million in 2017. The Sino- Afghan economic ties have grown stronger in recent years with the opening of The Afghanistan- China Air Corridor in November 2018. The state of Afghanistan will be exporting pine nuts to China through this corridor as the demand in the Chinese market has increased significantly. The initial estimates show that Afghanistan agreed to export approximately 23 metric tonnes of pine nuts into the Chines market annually, with saffron and other precious stones are also on the demand list of the Chinese; to be routed through this corridor. With all this strategic move, China has had helped Afghanistan to lift some 800 million of its people from poverty. On the contrary, the Chinese know how important role Afghanistan can play while connecting the Chinese markets to Central Asia and Europe thus facilitating its Belt and Road Initiative.

Afghanistan has always been unstable when it comes to security concerns of the state. For China to leverage its economic interests and to make the China Pakistan Economic Corridor a feasible and important trade route for connecting the Central Asian and European markets with China; the state of Afghanistan must maintain peace and stability for mutual economic interests. By making the best use of its geography, natural resources, connections and international attention; the state of Afghanistan has a lot to offer to the Chinese, with China being into consideration that Afghanistan holds strategic importance when it comes to benefit out of the Belt and Road Initiative for both the economies.

For Beijing, promoting peace in the region will not only help Afghanistan to get out of the continuous threat of terrorism but also help China to boost its economic activities. There is a long way to go for Beijing to understand and increase its bilateral relations with the state of Afghanistan because the security concerns will always be there until the Afghan Government and the military takes hold of the situation completely and strategically.

1 reply on “Chinese Interests in Afghanistan: From Indifference to Strategic Involvement”