India and Israel: A Stronger Bonhomie Notwithstanding A Global Crisis 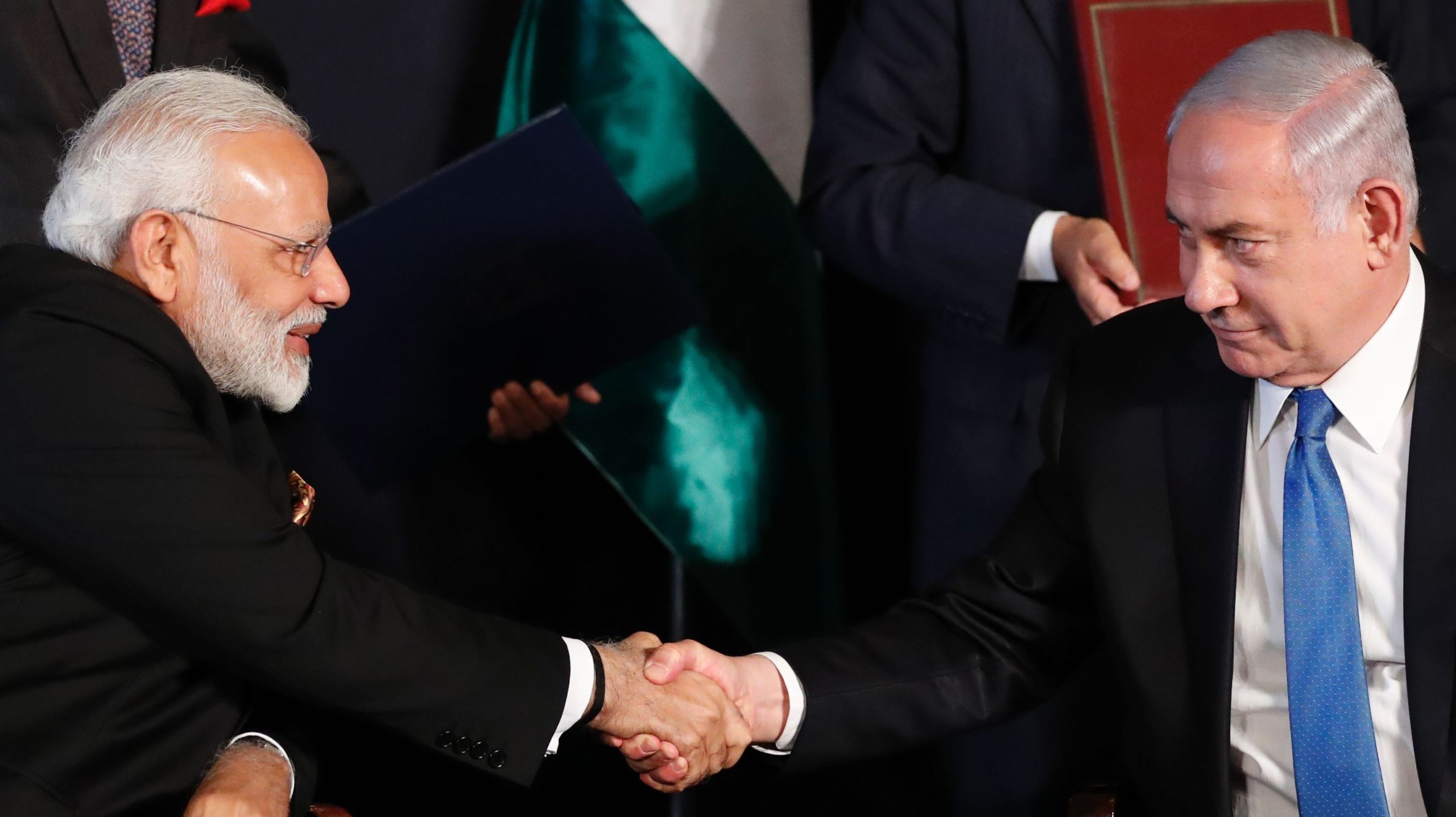 The year 2020 has begun with a lot of surprises to the international community whose course will change dramatically, the most intense of which is the ongoing crisis caused by a pandemic. The spread of COVID-19 has troubled most of the states, many of them being the most-developed and fast-developing states in the world. With preventive and retaliatory mechanisms like lockdown and quarantine in place, the economies have been slowing down and globalisation has been the worst affected. Amidst this mayhem, two states in Asia signed Rs. 880 crore- worth deal for procuring weapons. The Defence Ministry of India ordered precisely 16,479 Light Machine Guns (LMG) from Israel Weapon Industries for the Indian Army as it was in dire requirement of state-of-the-art LMG that is advanced than the INSAS LMG that is currently in use by the forces. The procurement is said to amplify the capacity of the forces, especially the front-line troops. India has remained the Israeli weapon industry’s top client, and the defence ties have been a major stimulus to the partnership between the two aspiring powers. Not just this, the two states have managed to look out for one another during this testing time, amid the virus outbreak.

Though the deal was questioned about its ethical underpinnings as such a huge investment could be diverted for the health aid for containing the virus, it could also actively contribute to kickstart the economy and keeping it alive. India’s purchase of oil from UAE as additional reserves is a similar move towards revitalising the economy, apart from taking advantage of the low oil prices.

A Friend in Need

In a goodwill gesture towards the foreign nationals in India during the emergency, the government extended timely help to Israel, among others, by evacuating about 500 Israelis from India to their home state. It flew Air India flights in two rounds to drop-off the Israelis who were in India. In the initial days of March, India had announced a ban on exporting generic drugs and the ingredients used to make those drugs. Owing to the disruptions caused by the virus outbreak, 26 Active Pharmaceutical Ingredients and medicines made from them, including Paracetamol, all of which constituted 10 percent of India’s overall pharmaceutical exports. However, with a single phone call, Israeli Prime Minister reached out to his Indian counterpart requesting to make an exception and release the supplies that are Israel-bound as the state was much reliant on them. The much-spoken comradeship between the two Prime Ministers passed its credibility test when New Delhi accepted Tel Aviv’s request not to halt the supply of the drugs and masks.

India once again stood by Israel when it gave a go recently, to export the anti-malarial drug Hydroxychloroquine (HCQ), which has been the most sought drug having the potential to treat the Coronavirus. Though India was particular in first tending to the neighbourhood, it had managed to supply HCQ to its friends out of the region like the United States and Israel. In the sense of elation, while awaiting the five-tonne of medicines from India, Prime Minister Netanyahu tweeted: “Thank you, my dear friend, Narendra Modi, Prime Minister of India, for sending Chloroquine to Israel. All the citizens of Israel thank you!”. This is not the first time that such words of friendship have been exchanged between the two leaders. While Prime Minister Modi is known for his healthy rapport with leaders of other states, his rapport with Netanyahu has always stood out. This has enhanced to take the bilateral relations between India and Israel a step higher.

Battling the Virus with Technology

To combat the drastic spread of the virus, Israel has turned to its technological innovations. The state has been using a mapping technology that was already in use by health professionals, privately. Powered by artificial intelligence and remote monitoring, the technology has been able to identify outbreak hotspots through different means such as anonymous questionnaires that are sent around for the people to answer. The map can help understand the patterns of transmission and the rate of spread, contributing to the overall containment efforts. The technology was indigenously developed by Diagnostic Robotics in Tel Aviv and has proven to be an effective combat measure during the COVID-19 crisis. The start-up has expressed its intent to succour other states and discussions are already underway with the United States. Earlier, India had requested Israel for specific technological solutions that would help in the treatment and restriction of the spread of the virus. The technology can heavily support India in combating the virus, and the prospects of India adopting this seems very high.

Israel was one of the first states that encouraged its citizens to espouse the Indian way of greeting, since the beginning of the outbreak. He mooted to greet with the “Indian Namaste” and avoid handshakes to keep the spread of the virus in check. He further went on to illustrate how to do Namaste during a press meet. Following which, Union Minister Prakash Javedkar also encouraged Indians to practice Namaste to greet one another. The Israeli missions in India have also been continually promoting Prime Minister Modi’s initiatives like the one-day curfew on the 22nd of March 2020, the token of appreciation by clapping and banging utensils, the lighting of lamp as part of a morale-boosting, symbolic fight against the pandemic. Israeli Ambassadors to India Ron Malka and Maya Kadosh have expressed their support to these initiatives through their social media platforms.

From A Low to A High and Towards Sustaining the Relations

India- Israel relations have gathered itself gradually after years of apprehension and inaction. From a regrettable low to the position it has reached now, the current government in both states have played an exemplary role. A positive trajectory is in the report card of this bilateral relations. Though the defence and security cooperation has been the mainstay, the bonhomie has produced other healthy manifestations that will chart the road to the future. Perceptions have changed, interests have converged, priorities realised, and the significance of the relations between the two states would last longer.

1 reply on “India and Israel: A Stronger Bonhomie Notwithstanding A Global Crisis”