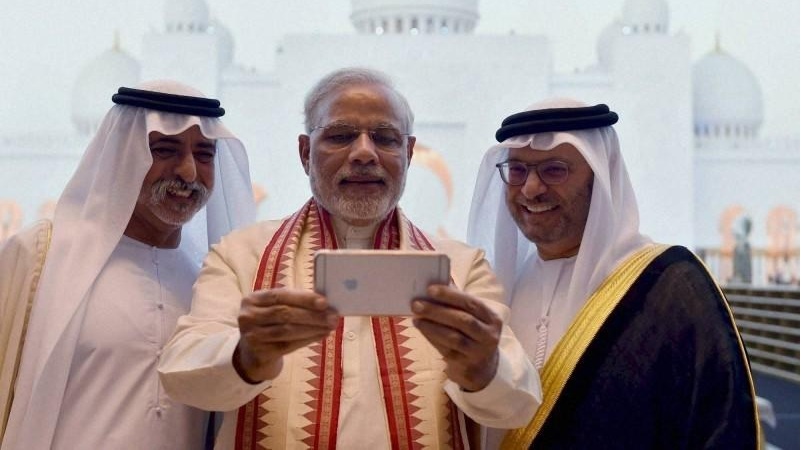 The Indian Diaspora was a crucial part of the state-building process in the Middle East. Gradually, the trade in various commodities (spices, pearls, etc.), became the economic backbone of the region. Since then, the relations between India and the region have moved beyond traditional ties. India relies on the region for its energy imports; which have increased year on year. The relations between India and the Middle East received a boost in recent years.

The bilateral ties between New Delhi and the countries in the region were looked at from a buyer and seller perspective. Along with a market for oil buys and expatriate remittances by India, cultural amalgamation between the South Asian country and the Middle East also increased. With Prime Minister Modi’s getting elected and coming to power in 2014, the ties improved further. The relations that were once restricted to simple trade and economic ties, the ‘Look West’ policy focussed on improving its relations with the regional powers such as Saudi Arabia, Qatar, Iran or the UAE. From, 2016 to 2019, P.M. Modi was honoured with awards from Bahrain, Palestine, Saudi Arabia and the UAE. Also, in 2019, OIC invited India to be the Guest of Honour at the 46th Session of the Council of Foreign Ministers in UAE, which established a secure sense of relationship, trust and credibility.

India pursued a very proactive policy in recent years (post-2014) where the association between New Delhi and the Middle Eastern countries also looked in for diversification into other areas of relations based on mutual gains. It is also India’s fourth-largest trading partner with bilateral trade at $27.48 billion in 2017-18 and Saudi’s investment of around $100 billion is in the pipeline in areas ranging from energy, refining, petrochemicals and infrastructure to agriculture, minerals and mining. India – Qatar ties have been underlined by the LNG imports. The depth of these ties is also reflected through the role played by Doha in the release of Father Alexis Prem Kumar. Gradually, the bilateral security arrangement between India and its friends in the region has expanded. Bahrain also went into an MoU with India in the area of Defense. Israel stepped up and became a key arms supplier for India. Israel’s military exports rose by 41 percent, overall in 2017, the third consecutive year of increased defence exports, bringing in some $9.2 billion in contracts. In 2007 and 2009, Indian Navy ships paid goodwill visits to UAE. Thus, the scenario represents a growing security engagement between India and the Middle East.

India’s Middle East Policy is diversified into other areas as well viz. anti-terrorism, maritime security and cyber security. Israel is also a key partner in agriculture and water conservation. In addition, a Memorandum of Understanding (MoU) was signed for setting up USD 40 million worth of India-Israel Industrial Research and Development (R&D) and Technical Innovation Fund. Nonetheless, the geostrategic interests of these countries have been carried into their relations. Pakistan’s refusal to send its forces in the Saudi led Yemen war did showcase Islamabad’s thought of non-compliance to be a party to the conflict. This, however, has not broken the line of union between the two. Riyadh plans to invest in Pakistan’s Gwadar Port which is being developed by Beijing. India is also involved with the development of the Chabahar Port in Iran against the Chinese in Gwadar. The revocation of Article 370 and the neutral stance taken by Saudi Arabia and UAE calls for a friendly gesture towards India.

Oil, Diaspora and Way Ahead

India’s Middle East affairs are traditionally linked to the economy. It is vital for India’s economic stance, as millions of Indians live and work in the region, and oil that is imported from there. The regional complexities that are a result of shifting geopolitics is redefining India’s role and objective in the region. An important trait of the relations is observed from a pattern of variety in India’s dealings with all the countries in the region and not taking particular sides. Apparently, India intends to play a more strategic role than simple bilateral ties. The last decade saw a major breakthrough in fastening of the security knot between the two.

Oil and Gas is a significant commodity for the global economies to boom. The rise in the income of the global middle class and its status today, makes energy flows a necessity. Today, energy is centric to foreign policy and plays an important role in world diplomacy. The oil boom in the 70s was a turning point for the Middle East that attracted migration from many Asian countries. Indians in UAE are 3.42 million; Saudi Arabia 2,594,947; Kuwait 1,029,861; Oman 779,351; Qatar 756,062; Bahrain 323,292. This population sent a huge sum of remittances (during 2016 – 17) from UAE were 26.9 percent, Saudi Arabia 11.6 percent, Qatar 6.5 percent, Oman 3.0 percent and Kuwait were 5.5 percent. India holds this soft power as a legacy with its extended neighbourhood – the Middle East. Nonetheless, energy remains a driving force of the relations between India and the region. India imported around 2.68 million barrels per day (BDP) from the Middle East in 2019. Post Arab Uprisings (2010 – 11), India’s role in the region has been very influential and impactful. India has been very keen on playing a decisive position – the role of peacekeeper in the region. This can be seen as India abstained from approving a no-fly zone over Libya. These ties helped in further cementing the relations between the two. P.M. Modi also spoke at the Future Development Initiative (FII) in Riyadh. In turn, the Kingdom also sees great potential in the rising Asian economy and looks at it from an area of investment opportunities.

The shifting geopolitics has a major contribution in the Middle East that is ever-changing – be it the Saudi – Iran dynamics, Qatar crisis, the Syrian crisis, or the threat of ISIS. Terrorist attacks on Saudi soil targeting its oil facilities at Abqaiq and Khurais do create a sense of insecurity for global oil markets not to mention, India. These factors will be instrumental in shaping India’s (strategic) ties with the region. As New Delhi always followed the non-alignment policy, it has balanced itself well with the regional actors. Traditionally, relations that were built on oil/gas and remittances; the changing times brought new challenges that have strategised India – Middle East ties.