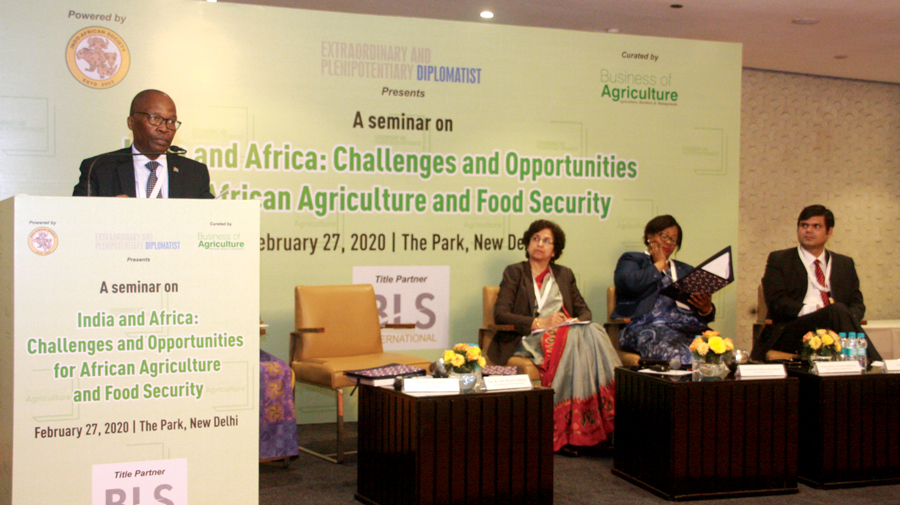 The statement was given by the South African High Commissioner to India at a seminar on “India and Africa: challenges and opportunities for African agriculture and food security” organised by The Diplomatist.

Historically, Agriculture has always paid a crucial and significant role in the South African economy contributing to a sizable portion of the GDP and this means a number of labour-intensive jobs being created. Within the context of our country, the integration, upskilling, financing and mentoring of emerging commercial farmers in general and in particular from the historically disadvantaged groups becomes one of the most important tasks facing the government and other stakeholders in the sector.

The bulk of the smallholder farmers are engaged is dominated by peasants who are engaged in subsistence farming and whose main pre-occupation is to ensure food security for their families but because of lack of resources are unable to keep up with the technological developments in the sector. Even if they produce a surplus, they still lack access to even local markets. Exchange of information with their regional and continental where feasible should be facilitated such that they could benefit from the knowledge spread.

The area of South-South cooperation is a key priority for South-Africa and its increasing use will assist United nations Organisations such as the FAO and the International Fund for Agricultural Development (IFAD) as well as other groupings of states, such as the Drought Core Group, to leverage their comparative advantages in developmental programs as well as in capacity building initiatives aimed at ensuring the increase of food security and nutrition.

With regard to the above, it should be remembered that support needs to be provided for small scale farmers, comprised of an overwhelming number of women.

Agriculture as a sector has been identified by President Ramaphosa, most recently in the year 2018. SONA, as being a sector that has the potential to create one million jobs when viewed with its associated industries. It is therefore of great importance that all efforts be made to ensure that the drivers of the sector are enhanced at all levels and that development of rural spaces is ramped up through various initiatives and South-South Triangular Cooperation partnerships.

The development of rural spaces will assist a rapidly aging agricultural sector to begin attracting younger people to begin farming as well as working within the associated industries such as transport, logistics and packaging amongst others.

Thus, while enjoying sovereignty over food security is an important goal in and of itself, the pursuit of a thriving agricultural sector has an ever greater impact on the lives and livelihoods of people and thus extends the import of food security past simply SDG 2 (zero hunger) and towards many others including, SDG 1(no poverty); SDG 3 (good health and well-being); SDG 8 (decent work and economic growth); SDG 13 (climate action); SDG 14 (life below water); and SDG 15 (life on land).

Climate Change and its related impacts thus reside as a key threat to a sustained and thriving Agricultural Sector and all efforts need to be undertaken to protect this vital sector from and to mitigate against the ravages of climate change.