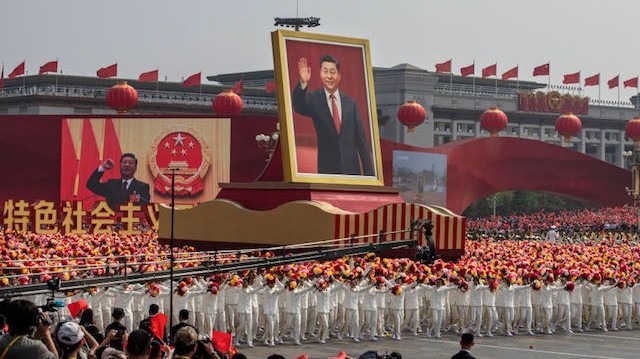 These words of Hugo validated when China celebrated 70 years of Communist party rule recently in October 2019 where Xi Jinping asserted that “there is no force that can shake the status of this great nation. No force can stop the Chinese people and the Chinese nation forging ahead.”

In academic circles, many reiterate that China’s time has come and she is at her power apex. Also, many adjectivize this emperor like state as an elephant in the room reckoning its huge economic surplus, massive overcapacity and economic might. A considerable number in the diplomatic community calls China’s Official development assistance (ODA) as a propensity of a creditor Imperialist. All these criticisms leave no doubt that Beijing is seeking to establish a Sinocentric regional order comprising of ‘Socialism with Chinese characteristics’.

The ‘China Dream’ or idea of making China great again, has been echoed by the state leaders for the last two centuries now and the idea continues to resonate with the Chinese people. The first popular expression of this sentiment was the Boxer Rebellion (1889-1901), which was anti-imperialist, anti-foreign and anti-Christian – together accumulated into resentment against the colonial powers who had divided the country, as the Chinese say, ‘like an over-ripe pomegranate’! The narrative of “a hundred years of humiliation” propagated by the Chinese Communist Party (CCP) leadership is part of this.

The leaders, including Mao Zedong and the founders of the CCP in 1921, have articulated this with the utmost intensity. One reason why it is called the ‘China Dream’ and not the Chinese Dream is that this is an idea that has inspired leaders and the leadership elite, and not the masses. At the 18th party Congress in 2012, Xi Jinping declared that he would achieve the China Dream by 2021, which is the centenary year of the CCP. He furthered this concept in the 19th party Congress in 2017 by reiterating China Dream 2021, Made in China 2035 and China would become a “major world power with pioneering global influence” by 2049!

THE BEST WEAPON IS ‘NO WEAPON’

It is said that Wit trumps weapons. It is a coincidence that China has taken a centre stage on the global platform without a single bullet being fired. Henry Kissinger in his memoir On China has articulated that Chinese characteristics have a great deal in common with Wei-qi (围棋), (pronounced way-chi) the world’s oldest and most sophisticated board game. This game replicates the intricacies of the country’s geopolitics. Scholars argue that Chinese military theory and this game are both manifestations of the same philosophy. This is outlined in Sun Tzu’s The Art of War: Warfare is almost always the option of last resort. The preferred and superior approach is to convince your enemy, by whatever means, that you are invincible. The game’s Chinese name translates roughly as “the game of encirclement”. Played on a square grid with 19 intersecting points along each axis, it involves two players taking turns placing white or black stones (all of equal value) on the grid. The goal is to surround and capture enemy stones, dominating the board.

Fig1.1 The idea of encirclement

In chapter III Attack by Stratagem point 2 the writer says “Fight and conquer in all your battle is not supreme excellence; supreme excellence consists in breaking the enemy’s resistance without fighting” It means guns and swords make a lesser difference than fighting with strategies. This explains China’s actions in recent times with regard to contemporary world affairs.

The history of a country forms its present character, so in China. China didn’t have a foreign ministry until 1911. Before 1911, foreign policy was conducted by the Ministry of Rites. Therefore, it could be well established that the traditional values are embedded in their thinking and these values are forging more and more into their actions.

Xi Jinping’s predecessor, Hu Jintao, decided the time had come to push its viewpoint across the world and project a positive image of the Chinese culture and traditions. They initially invested US$ 6.6 billion in the effort. The state-owned China Global Television Network (CGTN) and editions of the newspapers like People’s Daily, gave a boost to spreading the language, culture, food etc. It was felt that the negative image of China being projected by Hollywood needed to change. Chinese State-owned Enterprises (SoEs) began investing in Hollywood films and well-known foreign directors with instructions to portray China in a positive light. Therefore, this is a gradual advance to sell Chinese characteristics to the world.

The Chinese are like compulsive students – for them, no problem is finally solved every solution is an admission to a new problem– Henry Kissinger.

OBOR AND STRING OF PEARLS

China’s Belt and Road Initiative (also known as One Belt, One Road (OBOR)) is one of President Xi’s most ambitious foreign and economic policies. It aims to strengthen Beijing’s economic leadership through a vast number of infrastructure projects which costs around $8 trillion and encompasses 65 countries. Many foreign policy analysts view this initiative largely through a geopolitical lens, seeing it as Beijing’s attempt to gain political leverage over its neighbours.

Many argue that Beijing not only trying to export high-end goods to the world but also to encourage the acceptance of Chinese standards.

The string of pearls conundrum is another complexion in which the cartographic of Beijing’s expansion in the Indian Ocean region is questioned. “The String of Pearls” is a geopolitical theory related to Chinese intentions in the Indian Ocean region. It refers to the network of their military and commercial facilities and relationships along its sea lines of communication. Critics argue that String of pearls is a Chinese notion of encircling India by refurbishing ports in various countries around the Indian subcontinent.

There are different viewpoints about China’s Rise:

Prof. Srikant Kondapalli from the School of International Studies, JNU, iterates that Chinas soft hand hard hand techniques are formidable. If the Chinese think that their soft power to influence is not working they would try to switch to hard power advancements, this will continue till they reach a pinnacle. This explains assertive behaviour in the Indian Ocean region. Professor also explains that China’s Comprehensively Deeping reforms under which explain China’s revisionist behaviour.

John Mersheimer from Realist school of thought argues that China will rise in the near future & it will convert her economic might into military might. He further argues that the rise of China will change the status quo, if the Chinese economy continues growing at a brisk clip in the next few decades, the world will once again face a potential peer competitor, and great-power politics will return in full force the way it was during the Cold War.

Shivshankar Menon former NSA, Government of India notes that it’s China’s relative moment of dominance and they will try to change the global order in their favour. They will try to do a number of cartographic expansions for their empire to flourish at this particular point in time.

Nirupama Rao former Indian Foreign Secretary in one of the interviews stated that “South Asia is meant to be an integer of connectivity but BRI is an expression of growing Chinese power and influence. It’s a way they moved from the Deng Xiaoping low profile to We will be leaders narrative and it is an evidence of their strategic, economic and military advance”.

In today’s comprehensive society the world has branded China as a ‘Revisionist’ power aiming to change the current status-quo. It is also argued that, over the long term, Beijing intends to replace the United States as the principal constructor of a new security order. These revisionist intentions are neither secret nor holds any element of surprise. All these ultimately are speculations on the basis of fear and anxiety.

But to predict the future, one needs a theory of international politics that explains how rising great powers are likely to act and how the other states in the system will react to them. We must rely on some substantial theory because many aspects of the future are still unknown; we have few facts about the future.

Thomas Hobbes put the point well: “The present only has a being in nature; things past have a being in the memory only, but things to come have no being at all.” Thus, we must use theories to predict what is likely to transpire in the emerging world politics.

Will China be a revisionist power still remains a question and will the rise of China be peaceful remains a considerable debate…!

Nichole Ballawar
Author is a Senior Visiting Faculty member at Nagpur's Government Law College. He has also served as a Research Associate at the Centre for Air Power Studies (CAPS) as a Defence Analyst for Janes. He has also worked as a China Research Assistant for the Ministry of External Affairs and as an Intern for the United Nations Development Program. He collaborated with organizations such as NIICE, The Diplomatist, and 9dashline, among others, and produced a number of research publications. He has written several essays on China, nuclear nonproliferation, and arms control.
Tags:
China Beijing Xi Jinping Communist Party Art of War String of Pearls OBOR Belt and Road Initiative
Share:
Share this...