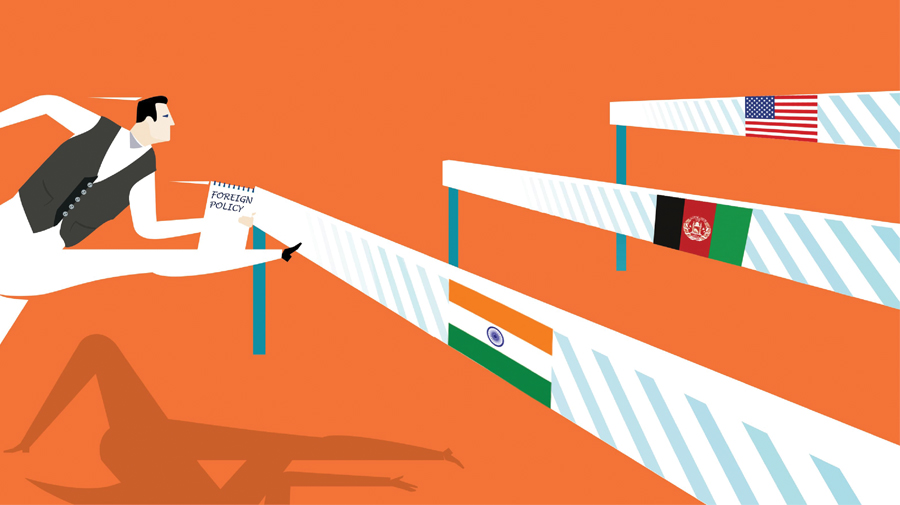 The second term of Sri Narendra Modi as the Prime Minister of India in 2019 has sustained the relevance of major foreign policy initiatives put forward by him in his first term of office. India’s efforts to reform and formalise its economy, mainly for ensuring a conducive environment for ‘Make in India’ with an aim to realise the ambitious goal of USD 5 Trillian economy by 2024, was linked to imperatives of country’s foreign policy. India has shown its strong measures against conventional security threats and cross-border terrorism during the first Modi government. Under him, there have been attempts to uphold India’s underexplored cultural assets as soft power to reach out to world nations as well as the global community. In such a situation, his re-entry as the prime minister with a considerable majority in the parliament has sparked a prediction that India would occupy a magnificent space with the glamour of a rising power in the contemporary world.  However, the contemporary world scenario is very complex and vague. Latest developments like the US-China competition and trade war, the rise of G20 and BRICS, escalating US-Iran tension, the emerging Regional Cooperation and Economic Partnership (RCEP) and Quad in Indo-Pacific Ocean, Russia’s attempts to regain the Eurasian landmass, the rise of Germany and Brexit in Europe have become the apparent symptoms of a complex ongoing world order that put India on the historical crossroad of both opportunities and challenges. The world has unquestionably been moving towards an uncertain condition in an unprecedented manner. This has gifted a dilemma to all countries including India with regards to foreign policymaking. Against such a backdrop here attempts are made to give a brief analysis of the challenges and opportunities before India in formulating its foreign policy. The neighbourhood policy and approaches towards major powers will be discussed here.

Perhaps the neighbourhood would be the most uncertain space concerning every country. We can seldom see states with a comprehensively friendly and certain neighbourhood. At the same time, going forward without taking the favourable as well as the adverse environment in the neighbourhood into consideration is a difficult task.   India’s Neighbourhood First policy has acknowledged that without connectivity and development in the immediate neighbourhood no country can enjoy its peace and prosperity. India has an international infrastructure development project that focuses on developing road and rail linkage along with pipeline connectivity with neighbouring countries like Nepal, Bhutan, Bangladesh, Myanmar and Thailand. The country hopes that by this project the development in the region can be ensured. India’s Act East policy is extending its connectivity further through its deep engagement with ASEAN, Japan, South Korea, Australia, and New Zealand. Similarly, India’s negotiation with Regional Comprehensive Economic Cooperation Partnership (RCEP) instils hopes of better trade, deepened connectivity and broader security framework.

In order to remove the uncertainty in relationships, one country has to identify its weaknesses and strengths alike. The weaknesses will explain what the country needs from others. Similarly, what the country can give others increases the strength of the unit. Identifying the needs from neighbourhood, India has been framing new foreign policy concepts and plan of actions by incorporating countries lying beyond the traditional neighbourhood. India’s Act West and Connect Central Asia policy belong to such a group of novel initiatives. The major driving force behind them is to ensure the requirement of energy, trade and security. At the same time, India views itself as the biggest potential constructive and balancing player for ensuring the stability and peace in recent escalating US-Iran tension and US-Russia-China competition for strategic dominance because of its cultural past and rising economy.

The Indo-Pacific region has become the major battleground of major powers. The strategic position of India has always demanded an increased involvement in the region. The rivalry between China and the United States gives a picture of an ideological battle between democratic and authoritarian political systems.  This has always pushed the world into an uncertain state. “The Quad” (2017), India-USA 2+2 Dialogue (2018 and 2019), Sangri-La Dialogue (2018), U.S.-Australia-India-Japan are the key “defining movements” for deep strategic engagement in the Indo-Pacific region. They can be viewed as collective efforts aimed at collective cooperation in the area of counter-terrorism and maritime security and in various other regional and global issues.

Though difficult to grasp in the current vague global atmosphere, China is generally viewed as the biggest foreign policy challenge to India, especially when it heads aggressively to become the most impressive power in the world. However, considering the uncertain nature of global politics, neither India nor China intends to have an overt confrontation.  India’s informal-Wuhan and Mammalpuram talk is signifying the possibilities to build the tenets of cooperation and balancing approaches in the emerging world order. Today, China is more accommodative towards India because of the China-U.S. trade war and the USA’s strategic alliances in the Indo-Pacific Ocean. India’s own economic ambitions and South Asian policies recognised its compulsions of having a stable stand on China.

Russia is the most trusted and crucial partner for advance weaponry and technological cooperation. India’s recent initiative for crafting cooperation in new and emerging technology is aimed to restrict the triangular grouping of Russia, China and Pakistan. India’s engagement with the Eurasian Community and SCO (Shanghai Cooperation Organisation) become crucial in light of both security and trade perspectives. The rise of Germany and the issues with regards to Brexit in Europe is one of the alarming development as far as India is concerned. The after-effects of these inevitable developments in Europe as well as outside are still unpredictable. This makes the foreign policy choices of India more critical.

It was exactly certain that there had been two clearly identifiable polarities in world politics during the cold war. This polarity based division withered away with the disintegration of the USSR. The power play in the aftermath was difficult to segregate. According to many, the next decade was an era of unilateral performance of the United States of America. Today since the rise of China and other BRICS countries, there has been an apparent confusion among experts on the nature of power distributions in the world. Some have described it as multi-polarity while others termed it as non- polarity. All these crises have produced an uncertain environment before countries while crafting their foreign policy framework. India faces the same dilemma especially in the policy approaches towards world powers.