Diplomatist > Development Partnerships > State Visit of Indian Vice-President to Latvia: Beginning of The New Era in The Diplomatic Relationship

State Visit of Indian Vice-President to Latvia: Beginning of The New Era in The Diplomatic Relationship 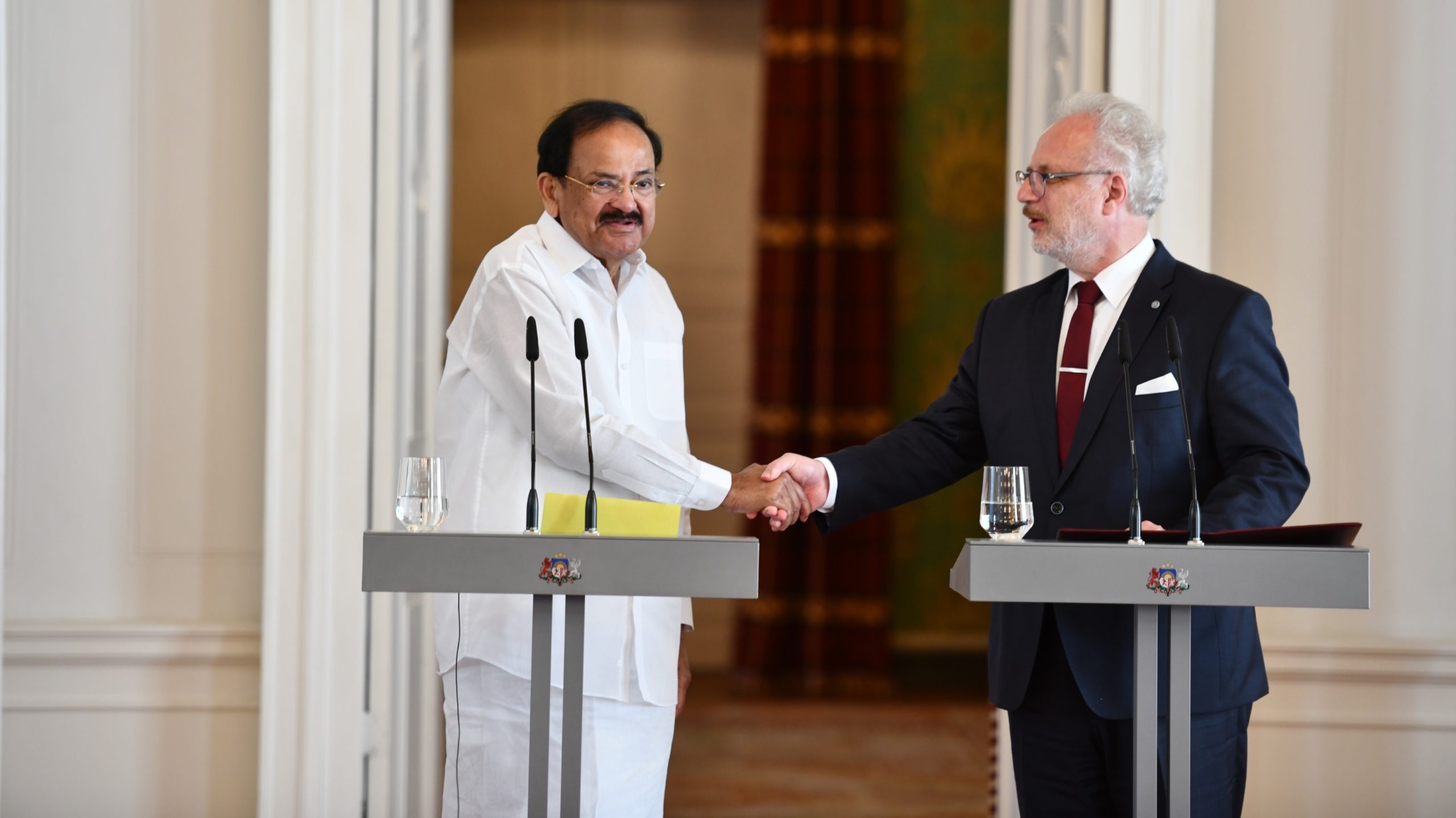 In August 2019, Vice-President of India, Shri M. Venkaiah Naidu visited the three Baltic nations of Lithuania, Estonia, and Latvia. The visit was seen as India’s first-ever high-level visit to Latvia since the establishment of diplomatic relations. He was accompanied by a high-level delegation which included cabinet minister and Member of Parliament from both the houses and other senior bureaucrats along with a   25-member business delegation. The visit came in the wake of the paradigm shift in India’s foreign policy under the present government of reaching out to smaller member states of the United Nation.

Honourable VP met the Latvian President Eglis Levits on his two-day visit and discussed matters of bilateral cooperation. Talks on the extension of cooperation in the field of education and science were at the center of the meeting as President Levits emphasized on promoting exchange between universities and colleges of both the countries given that more than 2000 Indian students are already studying in different Latvian universities.

During the meet, an MoU on cultural exchange between India and Latvia was signed. Latvia along with other Baltic and Nordic nations, mainly Estonia and Finland, have expressed interest in joining India’s ambitious International North-South Transport   Corridor, (INST, (founded along with Iran and   Russia) simultaneously with European   Rail.   India also wishes to actively engage European Nations to boost its grand plan of Northern connectivity in the wake of China’s multi-nation Belt and Road initiative. The involvement of Latvia in INST will give India quicker access to Europe as the conventional Suez Canal route is way longer. The Latvian port of Riga is an all-weather port that may help in the near future in facilitating trade from India to countries lying towards the west of Latvia indiscriminate of weather conditions in the region. The traditional sea route for India from Riga is roughly 16000 km and takes around 45 days. The new rail route opened under INST is 9000 km and will take 21 days, if Latvia becomes part of INST.

The Latvian involvement in INST will also boost India-Latvia bilateral trade relations which exponentially have increased from 164 million US dollars in 2017-18 to 273.97 million US dollars in 2018-19. VP Naidu also met Latvian Prime Minister Kriojanis Karins during his visit to Riga. Karins invited India to open an embassy in Latvia in order to achieve effective communication and cooperation between both countries. India currently does not have an embassy in any of the Baltic States. It currently operates in the region through the Indian embassy in Sweden. India must have an embassy in the region and should use all the available conventional and cultural tools of diplomacy to establish a closer relationship between both the nations at the level of bilateral interaction.

Latvia has also extended its support to India for non-permanent UN Security Council for 2021-2022 terms. In return, India has supported Latvia’s claim for non-permanent membership for the term 2026-27. Both countries also discussed possible avenues of further enhancement in the visibility and flow of people in each other’s countries for tourism, education, and jobs. He also participated in the Latvia-India   Business   Forum, LIBF collectively organized by the Indian embassy to Sweden and Latvia and Latvian investment and development agency. ASSOCHAM along with the Confederation of Indian Industry signed MOUs with Latvian Chamber of   Commerce and   Industry (LCCI) in the presence of Vice president and Latvian President. Later, the Indian Vice President unveiled the bust of Mahatma Gandhi in the National Library of Latvia and also visited the border areas of the Baltic nation.

He also interacted with the Indian Diaspora of Latvia on his very first day of the two-day visit to the country. Naidu began by thanking Latvia for their extraordinary hospitality extended to him and his accompanying delegation. During the address, he said that both countries have cordial relations with each other in diverse spheres like business and investment, culture and academia and people to people connect. He outlined the constant interaction of India Latvia Parliamentary group interaction and events like opening a yoga corner at the botanical garden of Riga along with an Indian corner at the National Library of Latvia as signs of growing friendship for both the countries. Besides, he invited Indian overseas investors to invest in India. In style unique to him of playing with words, he said that investors had earlier faced red tape but are now welcomed with red carpet. He also said that India is propelled by the mantra of reform, perform and transform. He added that India has now become the fastest-growing economy and India Latvia relations are quite crucial for both countries. Both must develop a niche of expertise to strengthen ties.

A lot of memorandum of understandings has been signed between both the countries in the fields of Culture, Arts, Education, Science, Mass-Media and Sports in the past. Economical and technical cooperation remains one of the important fields in order to bring Latvia and India closer to each other. The visit itself marked a new beginning in an already deepened Latvia-India bilateral relationship.

Latvia, because of its important geographical location can facilitate India as the gateway to the rest of Europe and its market through INST. Both countries must constantly look for opportunities for strengthening ties in the field of logistics, technological cooperation, urban development, education, and science to achieve greater bilateral diplomatic ties.