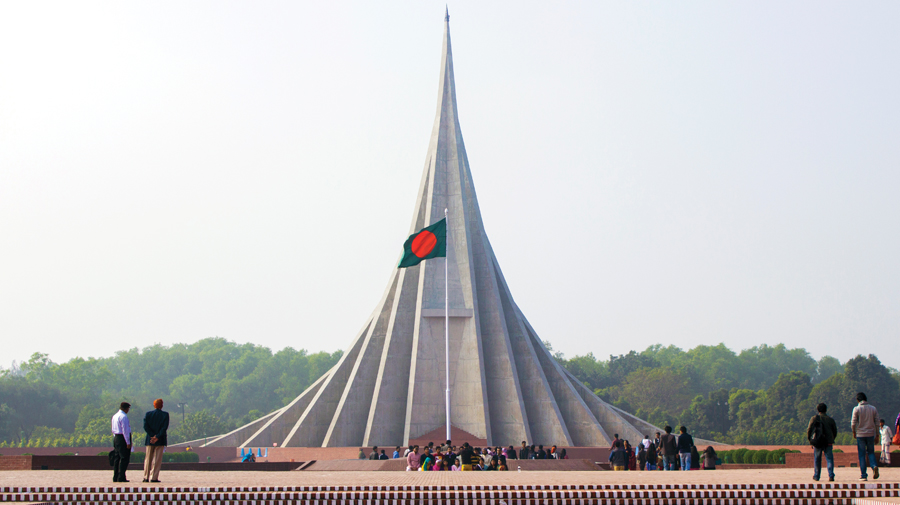 The People’s Republic of Bangladesh will celebrate the fifty years of its independence from Pakistan. A small state in the south Asian region, densely populated nevertheless trying to usher into the international platforms with the messages of peace, cooperation and inclusiveness. Bangladesh has shown to the world that it is integrated into its inclusive policy when it comes to accommodating the refugees fleeing persecution in Myanmar. As the state celebrates the golden anniversary of freedom the centenary year of the birth of its founding father adds further joy to the occasion. Sheikh Mujibur Rahman became the driving force behind the liberation of East Pakistan from the dominion of Pakistan.

When the Dominion of Pakistan was formed by the partition of India in 1947, it was composed of various ethnic and linguistic groups, with the geographically non-contiguous East Bengal province having a mainly Bengali population. However, the successive governments that came in power at the center neglected the ethnic and linguistic diversity that this geographical area encompasses. They provided limited assistance to the province in terms of finance and infrastructure although the main revenue source of West Pakistan came from East Pakistan it was denied and discriminated at all levels, political, economic, social and cultural.  A move to make Urdu as the official language and the only language provoked the sentiments of people in East Bengal (East Pakistan, 1956; Bangladesh, 1971) who were already agitating against the ban of Bengali literature, media and even ban on the works of Tagore. This gave birth to the rise of the Bengali language movement which spread across East Bengal province of the dominion of Pakistan.  The language movement was a catalyst in offering a national identity to various movements that were on rise simultaneously.  Sheikh Mujibur Rahman came to be popular among people as a great orator and someone who voiced against the increasing discrimination faced by Bengalis who constitute the majority of the state’s population. His six-point movement to secure financial autonomy and regulations to control the flight of capital from East to West have gained him a considerable stand in the hearts of the people. However, the ruling military junta in West Pakistan did not solicit Mujib to form the government despite having secured a majority win in the first democratically conducted general elections of Pakistan in 1970. As civil disobedience erupted across East Pakistan, Mujib indirectly announced the independence of Bangladesh during his landmark speech on 7 March 1971.

In order to curtail the mass protests erupted everywhere in the erstwhile East Pakistan the Pakistan army introduced its military with the tag Operation searchlight, a planned military operation of the Pakistani General to suppress the Bengali national movements. The provisional government in Bengal prepared its forces to resist the Pakistani army. However, the attack on the Indian airfields and radar installations have brought India too in the war. The all-out war is significant because of various dimensions. Bangladesh did not have a strong army however Indian assistance and the strategic help provided by the research and analysis wing (RAW) provided a better advantage to the Bangladeshi army. The Seventh Fleet of American Navy was left to attack India nevertheless the opportunist intervention of the USSR had stopped the Seventh fleet, that was the first time India faced a military threat from its maritime borders.

India and Bangladesh bonhomie haven’t lasted very long. However, both the states do maintain a cordial relationship and sit together to discuss bilateral issues and other serious matters of concern. The liberation of Bangladesh from Pakistan became was achieved due to the logistical and strategic aid provided by the Indian Army. Mujibur Rahman was imprisoned by the ruling military regime and the surrender of the Pakistan army unfurled the flag from oppression and freed a nation to independence. Before 1947 erstwhile East Pakistan was part of the Bengal province of British India, the English had divided the land into two as East Bengal and West Bengal in 1905 choosing religion to determine the borders. Muslim majority land became East Bengal and the Hindu majority became West Bengal. Upon Partition of the state, Muslim populated East Bengal joined with the dominion of Pakistan owing to the demands and communal riots unleashed by Jinnah. The 1971 war although not declared as a war by neither of the nations was, in reality, quite a war fought by people to protect their identity, culture, ethnicity and linguistic ecstasy.

The Prime Minister of India Ms. Indira Gandhi’s crucial role in the liberation war cannot be forgotten, who authorized diplomatic, economic and military support to the Bangladesh Forces in April 1971. It was the widespread genocide caused by West Pakistan that induced international support and recognition for the cause of Bangladesh. India recognized Bangladesh as an independent country on 6th December 1971.  Since then, until the military coup of 1975 followed by the death of Mujibur Rahman, India and Bangladesh continued to cherish good relations. The military governments that came up in Bangladesh fuelled anti-India feeling among the civilians, increased dependency on India for assistance and support always shadowed the ambitions of Bangladesh.

Recognition in the international space is very much a necessity to argue one’s cause and to acquire sufficient attention to the issues faced by. South Asian region is abundant in resources water, timber, gas, minerals, pulses, spices, cotton, etc. However, all these resources are located in various parts of the region therefore governed by separate federal policies and institutions? Ever since independence from colonial power, there have been discussions and deliberations to create a common trade bloc in South Asia to ease trade and commerce and to encourage connectivity. The Asian Relations Conference held in New Delhi in April 1947; the Baguio Conference in the Philippines in May 1950; and the Colombo Powers Conference held in Sri Lanka in April 1954 were pointing towards an integrated South Asia. Although there had been a common understanding among the seven south Asian nations by the end of the 1970s, it was the Bangladesh President Ziaur Rahman later addressed official letters to the leaders of the countries of South Asia, presenting his vision for the future of the region and the compelling arguments for the region. During his visit to India in December 1977, Rahman discussed the issue of regional cooperation with the Indian Prime Minister, Morarji Desai. In the inaugural speech to the Colombo Plan Consultative Committee which met in Kathmandu also in 1977, King Birendra of Nepal gave a call for close regional cooperation among South Asian countries in sharing river waters. It was inevitable for Bangladesh to look closely at regional groupings and to acknowledge the primacy of custom unions and collective security when it comes to national security.

Bangladesh’s involvement in creating SAARC is of courage and determination. It was able to bring in both India and Pakistan within the institutional framework of the SAARC charter although with conditions. Much of the stagnation in work at the SAARC is even today credited at the fragile relationship maintained by India and Pakistan, ever since independence, there has been only conflicts infiltrations and wars, this has contributed largely to the slow pace in growth for the region. Apart from SAARC Bangladesh has reached out to the Commonwealth of Nations and the United Nations. Bangladesh has been chosen twice to be in the Security Council and it was upon the request of Bangladesh that February 21 is celebrated as the international mother language day. Bengali nationalism is deeply rooted in their language and ethnicity. Nothing can remove from their space.