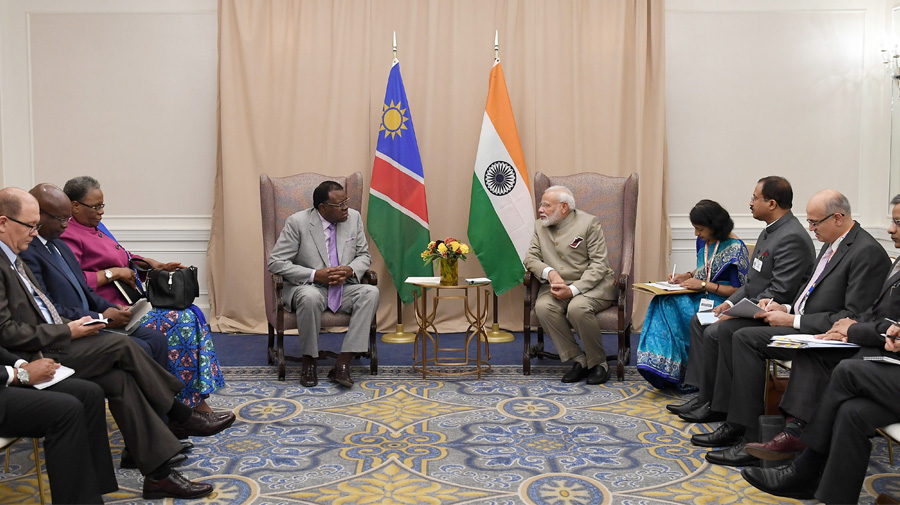 India and Namibia enjoy close, cordial, and time tested ties that predate Namibia’s independence. Based on a firm foundation of mutual trust and understanding, our engagement is growing strength to strength. The imperatives of our shared history and cultural links, our shared challenges, our complementary strengths and capacities that make us natural and economic partners, and our common approach in meeting developmental challenges, continues to drive our bilateral partnership.

Present-day Namibia (then known as German South-West Africa) was formally colonised by Germany between 1884-1890. Over the next hundred years, tribes living there suffered harsh injustices and dehumanization –first at the hands of the Germans as evidenced by the brutal suppression of Herero and Nama uprising in 1904-1908, and subsequently of South Africa. But this history never deterred Namibians confidence, who after a long, arduous struggle against rule by South Africa achieved independence in 1990.

Throughout Namibians fight for liberation, they found a steadfast partner in India. India was among the first nation’ to raise the question of Namibian independence and racial discrimination in the United Nations General Assembly way back in 1946.[1] Our close ties are evidenced from the fact that the South West Africa People’s Organisation’s (SWAPO) – Namibia’s dominant political organisation which led the Namibian freedom movement – first embassy abroad was opened in New Delhi back in 1964. Diplomatic ties between India and independent Namibia were established with the Indian Observer Mission being upgraded to a full-fledged High Commission in March 1990. Four years later, Namibia opened its Resident Mission in New Delhi. The opening of SWAPO’s embassy in New Delhi was significant as it led the international community to take recognition of the Namibian independence cause.

Following Namibia’s independence, India-Namibia ties have been on the upswing. Political and diplomatic ties have been supplemented by regular and sustained high-level visits from both sides at the level of President, Vice President, and Prime Minister. The visit by then Indian President Shri Pranab Mukherjee in June 2016 cemented a new phase in India-Namibia bilateral relations.

While addressing a joint parliament session of Namibia, Shri Pranab Mukherjee reiterated India’s willingness to ‘extend any assistance’ that Namibia requires in reaching its socio-economic objectives, as enshrined in President Hage Geingob’s Harambee Prosperity Plan, by promoting inclusive development, strengthening capacity building, skilling Namibian entrepreneurs and diplomats, and empowering the disempowered by ensuring that no section is left behind in Namibia’s developmental journey.[2]

From the Namibian side as well, founding President Dr. Sam Nujoma, former President Dr. Hifikepunye Pohamba, and current President Dr. Hage G Geingob have visited India on many occasions. President Geingob attended the third India Africa Forum Summit (IAFS-III) in 2015 which saw participation from over forty African Heads of State and Government. The most recent interaction was President Geingob and Prime Minister Narendra Modi’s bilateral meeting at the sidelines of 74th United Nations General Assembly session in New York in September 2019 during which the two leaders stressed on strengthening bilateral partnership by improving our trade and economic ties.[3] Partners such as India-Namibia Chamber of Commerce and Industry counties to provide support and a link for the promotion of commercial, economic, and cultural relations.

Although India-Namibia bilateral trade is small, amounting to just US$ 135.92 million in 2018-2019[4], there is immense potential to tap into due to the complementarities of our respective economies. This emphasis on improving trade ties is pertinent because many items such as Namibian rough diamonds arrive to India indirectly via third countries, like the United Kingdom and Belgium, and does not get reflected in our bilateral trade volumes. Similarly, Indian items are re-imported into Namibia from countries like South Africa via the South African Customs Union (SACU) trade route.[5] These items are shown as imports from South Africa rather than reflecting on India-Namibia’s bilateral trade figures.

Namibia is also a leader in natural resource conversation and is well endowed in mineral and natural resources like diamonds, copper, uranium, zinc etc. Since there is a great demand in Indian markets for natural resources, Namibia is a natural partner for India to collaborate with. Furthermore, being a semi-arid country with erratic rainfall patterns, Namibia has in the past and continues to witness deteriorating grazing patterns, delays in cultivation activities, which subsequently threatens sustained food security. Therefore, the Government of India on several occasions (2013, 2016, June 2019) has provided drought relief support and assistance to the Namibian government by donating rice, mahangu, and essential medical supplies.[6]

One key pillar of our bilateral ties is capacity building, training and skills development under the Indian Technical and Economic Cooperation (ITEC). Since its inception, over 1100 Namibians from various government ministries and professional spheres have benefitted from this training programme.[7] Around two-hundred slots under ITEC are reserved for Namibians. The Indian High Commission in Windhoek also celebrated ITEC day on September 6, 2019, during which Namibian ITEC alumni’s shared experiences of their time spent in India.[8] Additionally, in order to further our collaboration in education, the Government of India is establishing a Centre of Excellence in Information Technology at the Namibia University of Science and Technology (NUST) campus.

Our collaboration in the health sector is also deepening. Various roundtable discussions around cooperation in health and medical sectors have been organised by Indian High Commission in Windhoek. Recently in September 2019, Indian High Commission organised a six weeks’ long healthcare camp in Rundu province to provide free of cost artificial limbs to needy persons.[9] The health camp was organised under Jaipur Foot Artificial Limb Fitment camp, under Government of India’s ‘India for Humanity’ initiative.

These diverse avenues of cooperation are a testament to India and Namibia’s fraternal relations which has come a long way over the last thirty years. With a stable democracy and rule of law, the prevalence of English as the official language for communication, good human resources and infrastructure, and a strong, committed and visionary leadership under President Hage Geingob and Prime Minister Narendra Modi, Namibia-India ties is positioned ideally to scale greater heights and transform our historical and cultural relations into a modern and dynamic partnership.