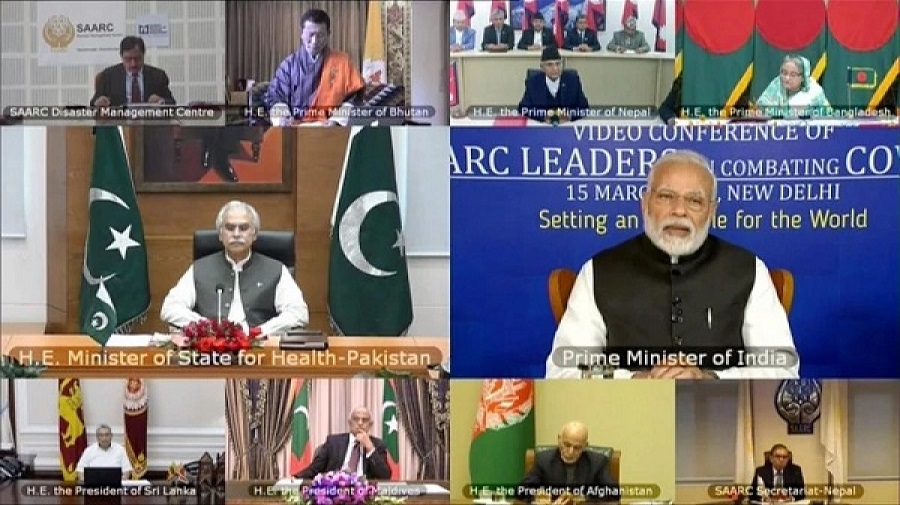 History reveals that once in nearly every 100 years the world is devastated by a virulent disease. In the year 1720 “The Great plague of Marseille” occurred claiming 100, 000 lives. In the years 1817-20 due to the cholera outbreak, the death toll was again around 100,000 while the most recent deadly pandemic was the Spanish flu of 1918 which claimed 100 million lives. Currently, it is the COVID-19 which has already taken a pandemic shape worldwide. According to the World Health Organisation (WHO) it has globally infected 2,76,474 individuals and has claimed 11,417 (as on 21 March 2020) until now.

The rapid scale of an outbreak of the virus has pushed the nation-states to act together, in close tandem on the one hand and on the other, ‘social distancing’ has become a central aspect of plans to limit the spread of the virus worldwide. The region of South Asia is no exception to it. After four years of logjam SAARC (South Asia Association of Regional comprising Afghanistan, Bangladesh, Bhutan, India, Maldives, Nepal, Pakistan and Sri Lanka) has been called to fight the novel COVID-19. The Indian Prime Minister Narendra Modi’s sudden tweet on 13 March to hold a video conference with the leaders of the SAARC member states to chalk out a common strategy to fight coronavirus has made a spark. In a quick response on 15 March, a video conference was arranged where the country heads of all eight countries came together with exception to Pakistan which designated its State Minister of Health, Zafar Mirza to attend the call. In the video conference, each country expressed their concerns regarding the outbreak of COVID-19 and steps that can be taken collectively. Indeed this diplomatic stance creating the virtual platform to handle this severity has set an example to the world.

During this virtual conference, Modi proposed to set up a COVID-19 emergency fund for SAARC countries on a voluntary basis where India initially will contribute $10 million. Modi also stated that any SAARC nation may utilise this fund during times of emergency and urged each nation to contribute. To quote Modi “We can respond best by coming together, not growing apart–collaboration, not confusion, preparation not panic,”. Additionally, a Rapid Response Team of doctors, specialists, testing equipment and attendant infrastructure has also been proposed which will be put at the disposal of the SAARC nations.

Congratulating the effort of the Indian PM, the President of Afghanistan, Ashraf Ghani, has proposed a common framework for telemedicine to combat coronavirus. Maldivian President, Ibrahim Solih appreciating the coordinated approach to deal with Covid-19 has said no country can deal with the situation alone. Sri Lankan President, Gotabaya Rajapaksa has proposed setting up of SAARC ministerial-level group to deal with issues related to Coronavirus. He said many lessons will be learned from the sharing of experiences and thanked Modi for offering assistance to SAARC nations. While on the other hand the Bangladesh Prime Minister Sheikh Hasina has urged for continued dialogue between experts and officials on follow-up actions regarding Covid-19. More so, she has proposed for more video conferences engaging the health ministers of SAARC nations to discuss specific issues related to COVID-19. The leaders of the Himalayan states of Bhutan and Nepal were also positive and keen to have a collective strategy. Amidst this the Pakistan representative Mirza used the occasion to raise the Kashmir issue, stating that the restriction at the Jammu & Kashmir should be uplifted to help fight the Coronavirus outbreak.

Indeed the effort of Modi is praiseworthy for calling forth the SAARC nations. This may be an initial step to rejuvenate the entire regional forum which has been otherwise inactive since 2016. The 2016 SAARC summit was to be held in Islamabad in November but was postponed amid tensions between India and Pakistan over the attack on a military camp in Uri. Against this backdrop, the revival of the forum depends on the future steps the Indian government will take following this video call. This is thus a rare prospect for India to establish its positive imprint over the region. It is also to be noted that India will be hosting the Shanghai Cooperation Organisation (SCO) summit later this year, for which New Delhi may intend to invite the Pakistani Prime Minister Imran Khan and after India’s diplomatic stance it is now Pakistan’s turn to show some degree of flexibility.

Situation in South Asia at a glance

The table below shows a glimpse of the current situation of South Asia:

Currently, each SAARC nation has stepped up its preventive measures to contain the said disease. However, effective surveillance, as well as the need for more aggressive efforts, is urgently required. The increase of diagnostic labs and kits is essential to ensure proper detection. The primary focus will be on addressing social distancing measures such as avoiding large social gatherings and closing educational institutions, malls, movie halls, etc. In addition, sealing land and maritime borders as well as testing individuals who have returned from affected international destinations is being practiced. It is noteworthy in this context that Pakistan has recently made the Coronavirus test mandatory with effect from 21 March for all international arriving passengers to Pakistan Airports. The passengers shall be required to provide a copy of test results for COVID-19 through RT-PCR conducted during the 24 hours prior to boarding. Sri Lankan Government Medical Officer’s Association (GMOA) has requested to postpone all non-emergency healthcare services in government hospitals and has asked for adequate protection for hospital staff. It is worth mentioning in this context that as a preventive measure the Bangladesh government has cancelled the public gathering to celebrate the 100th Birth Anniversary of the Bangabandhu Sheikh Mujibur Rahman, the former President of Bangladesh on 17 March keeping the severity of the present situation in consideration.

On a regional scale, India has set up an Integrated Disease Surveillance Portal to better trace possible virus carriers and the people they contacted. The Indian Prime Minister offered to share this technology with SAARC partners besides providing training on using it. He also stated that existing facilities, such as the SAARC Disaster Management Centre, could be used to pool best practices and suggested a common platform to coordinate research on controlling epidemics within South Asia. The Indian Council of Medical Research (ICMR) may also assist in this regard. Since this pandemic has economic costs as well as consequences, experts could brainstorm on the longer-term economic consequences of Covid-19 and how South Asia can insulate internal trade and local value chains from its impact. Modi also suggested that common SAARC pandemic protocols could also be drawn up and applied in such situations.

The Prime Minister’s Office, Ministry of Health & Family Welfare (MoHFW) and Cabinet Secretary are closely monitoring the situation of COVID-19, invoking powers under The Epidemic Diseases Act, 1897 to enhance preparedness and containment of the virus. State Disaster Response Fund (SDRF), constituted under Section 48 (1) (a) of the Disaster Management Act, 2005, is now available with State Governments for responding to COVID-19, which has been declared a notified disaster.  A number of steps have been taken by the Central Ministries along with States/UTs in terms of strengthened community surveillance, quarantine facilities, isolation wards, adequate PPEs, trained manpower, rapid response teams for management of COVID-19.

It is interesting that the Indian response to the COVID- 19 is focused on what WHO categorises as “imported cases only”- where transmission is limited to international travellers alone. This is mirrored by the current measures taken for instance to cancel all but a small set of visas, largely sealing the country’s borders like all types of passenger movement for foreigners (except Nepalese and Bhutanese nationals) through all Immigration Land Check Posts at Indo-Bangladesh, Indo-Nepal, Indo-Bhutan and Indo-Myanmar border will be suspended from March 15, 2020. In a recent step, the travel of passengers from Afghanistan, Philippines, Malaysia to India has been prohibited. All passengers coming from the European Union (27 countries), European Free Trade Association (4 countries), Turkey and the United Kingdom have also been prohibited from entering India till 31 March.  In addition, testing for the virus has been limited to those with a history of recent international travel and individuals who have had contact with them. However, WHO categorises India as having local transmission where people to people contact through migration within and outside becomes important. In this context, understanding the correlation between migration and the spread of disease is becoming crucial day by day. Under the circumstances, where the movement of people is being restricted to ensure social distancing the virtual platforms may be of help in tightening closeness among people not only within India but also across borders in South Asia.

Anasua Basu Ray Choudhury
Author is a Senior Fellow, Observer Research Foundation, Kolkata and can be reached at anasuabasu@orfonline.org