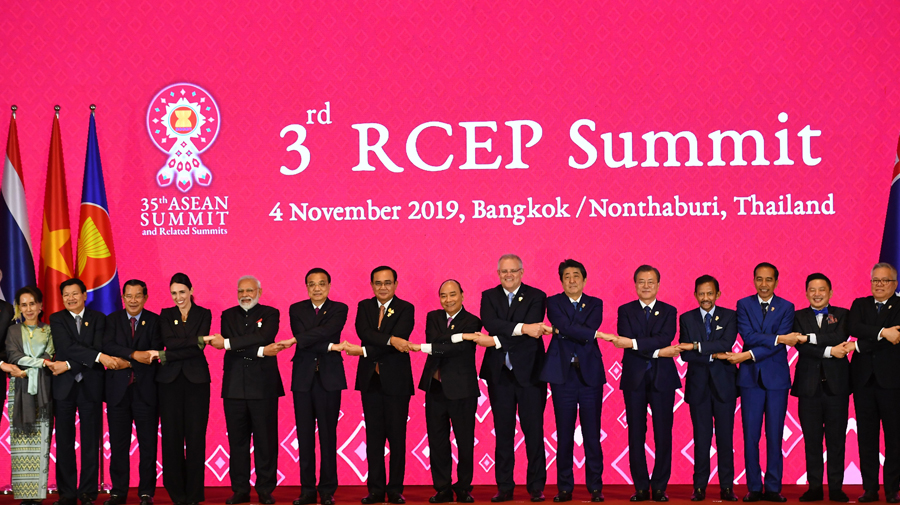 Not just a believer of the heterodox school of economic thought, even the faithful for classical political economy can’t negate that ‘dialectics’ has not ceased to influence the course of history and materialism. While Hegel, Marx and Engels had their interpretation of it, now in a different context when the ‘late-stage capitalism’ is shaping up regional geo-strategic and economic considerations in unprecedented ways, the necessity to comprehend well the ‘contradictions’ is something essential.

As the globalisation is in the process of traveling extra miles, the leading economies are willingly making efforts to go beyond the bilateral and other conventional economic diplomacy arrangements. Playing safe with the ‘Regional Cooperation Framework’, a large economy gets disproportionately benefitted out of the sentimental grouping of unequal participants. China has been a formidable player on this turf, so it sensed the criticality of India’s non-affirmative positioning on much touted Foreign Trade Agreement (FTA) experiment, Regional Comprehensive Economic Partnership (RCEP).

However, RCEP (ASEAN+6) being a China-dominated association had to receive India’s response as per its ‘enlightened self-interest’ to keep the history into perspectives, house in order and domestic manufacturing businesses to not suffer with undue openness.

Narendra Modi, the Prime Minister of India had summed up it eloquently as he said: “Whenever I try and gauge India’s interest in light of her joining RCEP, I do not get an answer in the affirmative; neither Gandhiji’s policy of self-reliance nor my wisdom allows me to join RCEP.” He made the statement based on realistic considerations, among them, one was a silent confession that India’s economy is passing through the rough phase.

Noticeably, India’s GDP growth has been slowing down for the last five consecutive quarters. It has been believed that the Indian economy was severely hit by the demonetisation and Goods and Services Tax (GST), the core manufacturing and real estate sectors have lost their ways and the economic situation is extremely precarious for now. India’s case of joining RCEP would have exposed India’s lack of readiness to come in term with the challenges from a new regional framework that was totally bereft of offering anything promissing to the industry in India.

India’s official positioning of not joining the RCEP was a conscious decision after calculating the imminent costs and gains with entering a new arrangement. Delivering the recent Ramnath Goenka Memorial Lecture in New Delhi, India’s External Affairs Minister Dr S Jaishankar made his statement on it, “And it was that no agreement at this time was better than a bad agreement. It is also important to recognise what the RCEP decision is not. It is not stepping back from the ‘Act East Policy’, which in any case is deeply rooted in distant and contemporary history.”

He further added to add in the line of government’s defence, “Our cooperation spans so many domains that this one decision does not really undermine the basics. Even in trade, India already has Free Trade Agreements (FTAs) with 12 of the 15 RCEP partners. Nor is there really a connection with our Indo-Pacific approach, as that goes well beyond the RCEP membership.” What the Minister made out was a narrative that India didn’t miss on ‘grand strategy’, in fact, this was close to the reality, as it was not an idea whose time really came. RCEP was not alone the matter of trade for India, it was very much related to strategy and foreign policy.

While India was at the cusp of taking a clear decision on it, its neighbours especially Nepal also watched the movements closely. Nepal, which has been grappling with the high trade deficit and lo manufacturing base, would not have gained much with India’s entry into RCEP and the possibility of attracting dumping of cheap goods from member-countries.

As Nepal is passing through a developmental condition where the mode, locale and scale of productions have to see a big shift for reciprocating the mass aspirations, it should aim to work with a model that is combining “Make in Nepal-Make for Nepal”. Only this can lead towards an inclusive and sustainable growth agenda, more inward looking approach for industrial activities and eyeing both the domestics and international markets is the need of the hour. Moreover, the policy-makers in Nepal must think seriously over the unchecked outbound migration which is causing enormous losses to the bright possibilities at home.

Why living a FTA dream? India’s tryst with FTAs has been disappointing. The examples are Indo-ASEAN FTA, Indo-Korea FTA and Indo-Japan FTA.

Notwithstanding the initial excitements, in practical terms, the FTAs have proved to be a faulty arrangement for India. The cases with many other countries have been not better either. The faultlines can be spotted with the ‘late stage capitalism’ that necessitates the

developing countries to go ahead with the public policy of developed and saturated economies. One of the common cases with the regional associations is that there is little scope for ‘level playing field’, as for the ‘protectionist measures’, they have not anything noble to offer except ‘double-standard’.

To maintain parity, an experiment like RCEP must offer the space of fair competition to other member-countries that were not luckier than China in protecting the economy and playing comfortably in the world. To make RCEP or any new formation, a positive factor for ‘Asian Century’, the strategic and economic fundamentals have to be ascertained. Simply put, the whims and fancies don’t help the grand plan. Above all, what matters is the fairness in intent and working for a shared goal. With RCEP, it was and is missing, alas!